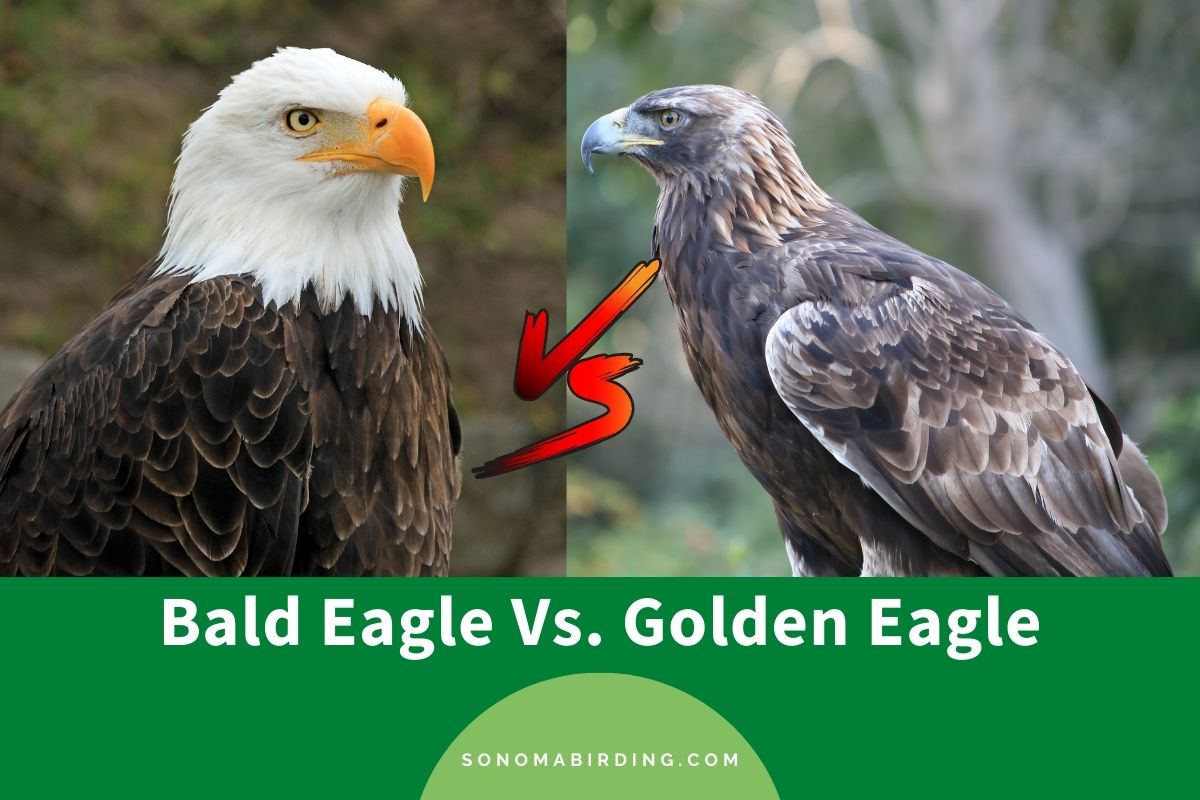 Eagles are considered one of the most royal members of the birds of prey family. They’re large, heavy, strong, and quite dangerous, with some species having the capacity to carry mammals twice their own weight to a considerable distance.

However, just like the owls, most species of these raptors appear somewhat alike, particularly when seen from a distance. And while they might seem that way, the truth is that they’re very different up close, both in appearance and behaviors.

Today, the eagle species that we’re going to talk about are Bald Eagles and Golden Eagles, two of the most popular North American eagles. Have you ever been confused about which eagle is bald and which one is golden?

In this article, we will provide a comparison between Bald and Golden Eagles on the grounds of appearance, vocalization, hunting style, diet, breeding, and nesting habits. Later, we will also discuss which species is more likely to win in a fight.

Bald Eagle vs. Golden Eagle: at a glance

Before we begin to compare Bald and Golden Eagles, it is worth mentioning that both of them belong to the same raptor family and are, therefore, distantly related. Because of this relation, both have some similarities in their anatomy and behavior.

Now, you can quickly go through the table given below that contains all the basic differences between these eagles:

Now that you’ve gathered a general idea of how these eagles are different from each other let’s study them in detail.

The first and most prominent difference between the Bald and Golden Eagles lies in their appearance. But it is also important to note that both these birds look almost identical under the age of five when they’re juveniles.

It is only when they reach adulthood that these eagles develop distinct physical features that set them apart. Below, we’ll explore what each eagle looks like and how they’re different from each other. 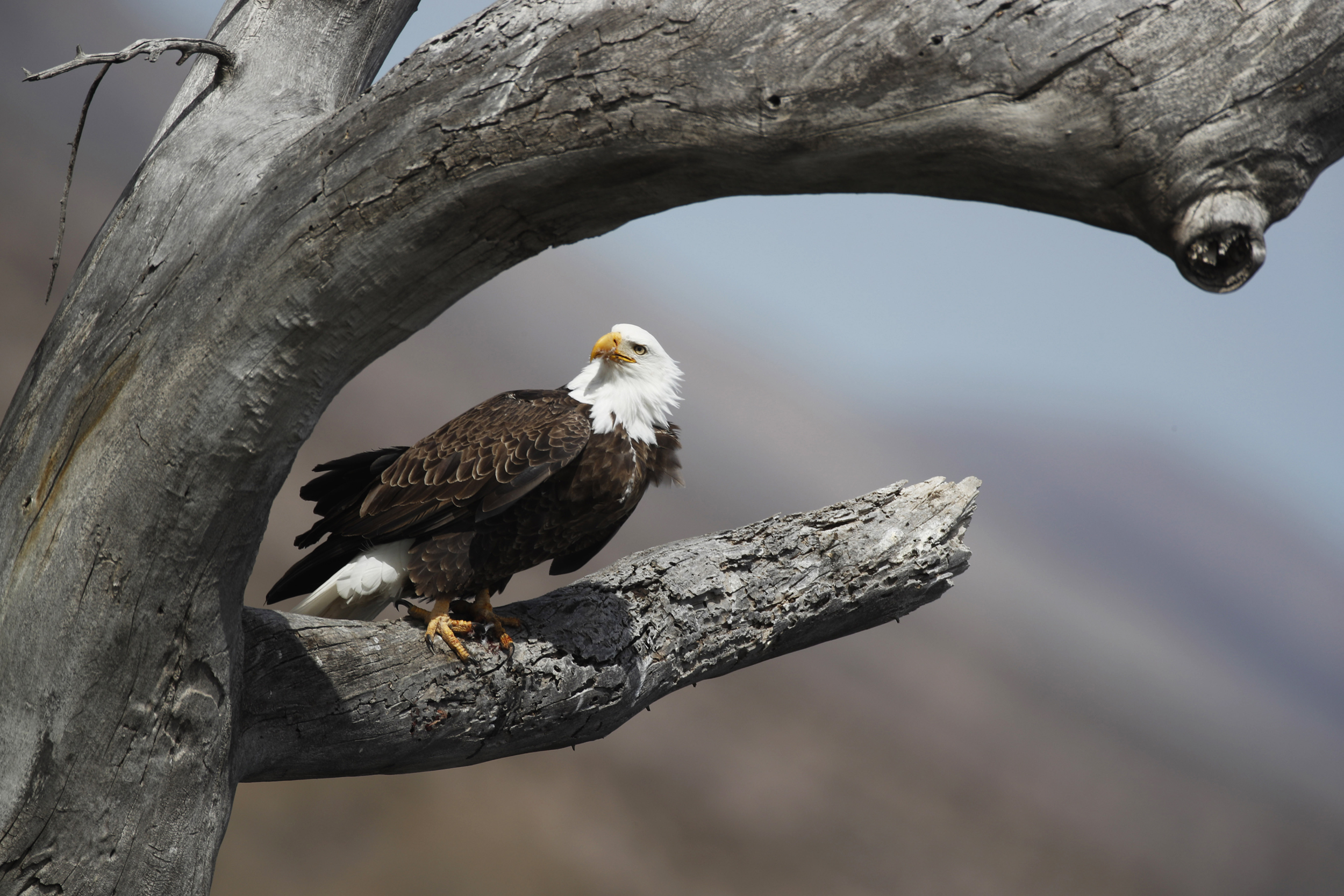 The adult Bald Eagles have an evenly colored plumage that is dark brown; only their head and tail are white, with their tail having a moderate length and a wedge-like shape.

Their feet and irises are bright yellow in contrast, and so is their bill, which is quite large and hooked at the edge; their cere is yellow as well.

Both sexes of the adult Bald Eagles possess identical plumage, displaying reverse sexual dimorphism in their size. The females are 25% larger than their male counterparts and are slightly heavier as well.

The legs of Bald Eagles are also bald, having no feathers at all. They have short toes and large talons that are highly developed; the single back toe pierces their prey while all front toes are used to hold them in flight or on the ground.

The appearance of these eagles is quite similar to their close relative, the African Fish Eagle, that occurs in Africa. However, within their range, Bald Eagles are one of a kind. 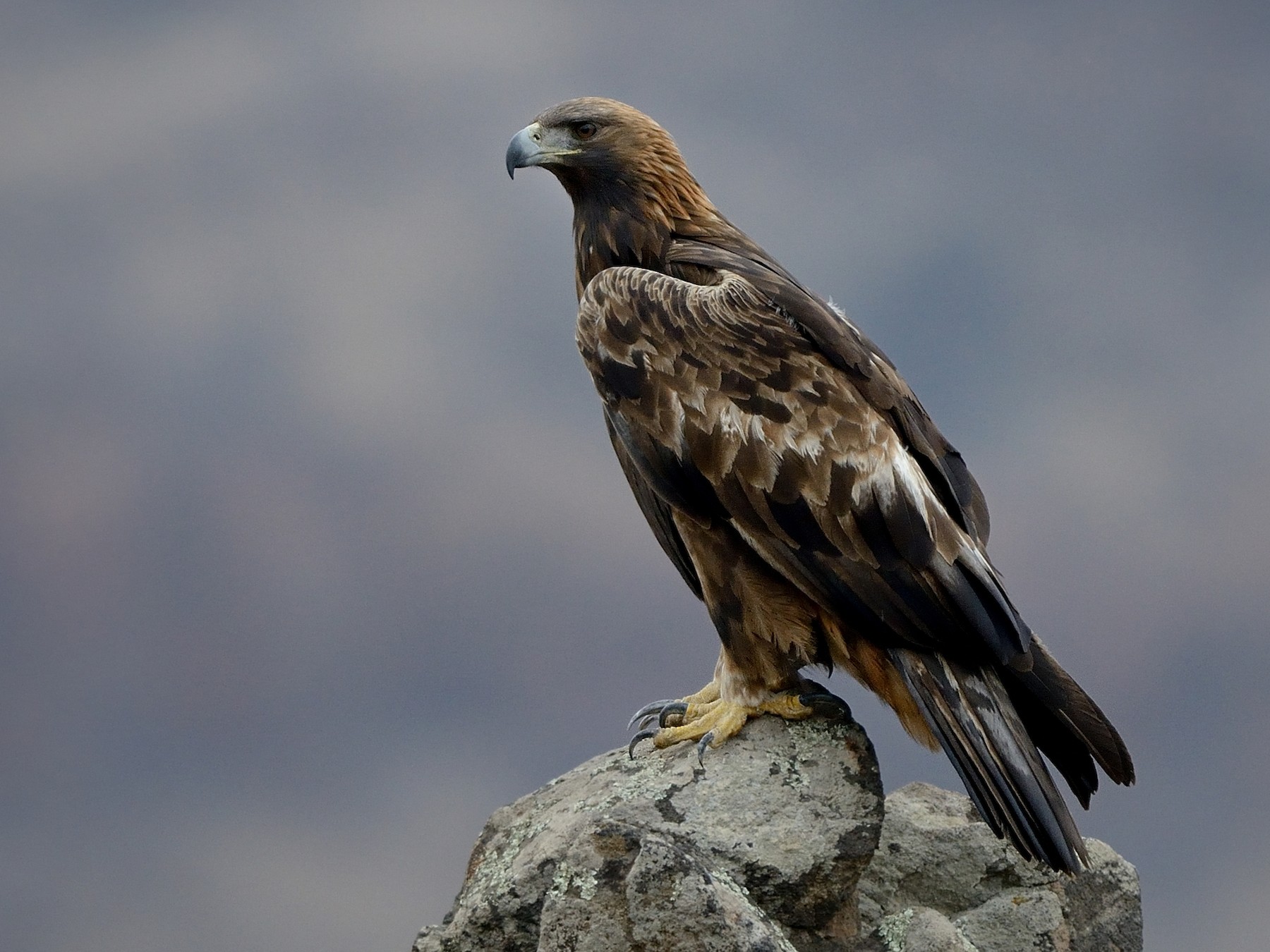 The adult Golden Eagles have a primarily dark brown plumage, with prominent touches of gold on the back of their crown and nape. These golden touches have given the eagles their name.

Their feet are heavily feathered, with their color being the same as the rest of their body, which is a rare feature in their genus. All the other true eagles generally have pale white tarsal feathers.

Both adult sexes appear similar in plumage. The females always possess a heavier body and longer wings; the exact sexual differences can vary among different subspecies and subtle color variations.

Golden Eagles have a yellow cere and a light, horn-colored bill, with the tip being dark grey. The bare parts of their feet are also yellow, much like that of other true eagles.

In the last section, we learned how Bald and Golden Eagles have many differences in their external appearance. Here, we will see how they’re quite similar in terms of vocalization.

In comparison to their strength, the voices of both these eagles are surprisingly weak. Between the two, Golden Eagles are quieter. They enjoy the silence and mostly remain quiet throughout their breeding season as well.

Both of these birds produce weak, high-pitched, and shrill calls with no remarkable quality to them.

As a general rule, Golden Eagles are adapted to more diverse habitats and can be found in several landscapes, including mountains, open and semi-open areas. Within North America, you can commonly spot them in the Arctic fringe, where they inhabit heathlands and tundra.

On the other hand, the Bald Eagles primarily dwell in all kinds of wetland habitats of North America, such as marshes, lakes, rivers, and seacoasts. It makes sense for them because they feed on fish almost exclusively.

Differences in hunting style and diet

When it comes to food, both Bald and Golden Eagles follow a diurnal schedule, actively hunting for food in the daytime, like most of the other eagles. But if their active hours are similar, what’s different about their diet and hunting style? Let’s find out.

Most people tend to think that Bald Eagles solely feed on fish, which is only partly true. While these marine creatures make up over 65% of their annual diet, the eagles will also occasionally prey on small mammals and other birds. They’re highly opportunistic and will rarely allow a feeding opportunity to pass.

The prey spectrum of Bald Eagles consists of over 400 different species, which is remarkable even for the birds of prey. They commonly consume larger fish species like salmon, trouts, mullets, and herrings.

Golden Eagles also have a diverse diet, consisting of both live prey and carrions. These eagles primarily feed on small-to-medium-sized mammals and birds. Their live prey generally includes grouses, hares, rabbits, and ptarmigans. The population that inhabits areas closer to the sea will also hunt seabirds like gulls, terns, gannets, and skuas.

Differences in breeding and nesting habits

Bald and Golden Eagles share one major similarity in their breeding habits; both of them mate for life. They breed with the same partners year after year until one of them dies. In that case, the survivor might find a new mate.

Let’s learn more about the breeding and nesting habits of these eagles:

When do Bald Eagles reach their sexual maturity?

Both sexes of Bald Eagles attain their sexual maturity at the age of five.

How many times do Bald Eagles breed in a year?

The adult Bald Eagles breed on an annual basis.

The breeding season for Bald Eagles

Where do Bald Eagles build their nests?
The nests of Bald Eagles are the largest of all North American birds, with their depth being 11 feet. Are you wondering how long it must take them to build a nest that large?

Well, they don’t build such a large nest every year. Instead, they keep returning to their first nest year after year, layering it with more lining materials and making it larger in the process. In many cases, we’ve seen that the nest of these eagles eventually grows too heavy for the tree, ultimately leading to its fall.

Bald Eagles ideally build their nests on large trees, often with a water body nearby. However, if they can’t find an appropriate tree, they will even settle for a ground nest.

How many eggs do the female Bald Eagles lay? What do they look like?

The female Bald Eagles lay 2-3 eggs at a time, all of them being pale white in color. Their eggs are generally unmarked, with rare brown splotching. These eggs are incubated for about 35 days, after which they hatch.

When do Golden Eagles reach their sexual maturity?

Golden Eagles are ready to breed as soon as they turn four. Both sexes mature at the same time and often mate with other same-year individuals.

How many times do Golden Eagles breed in a year?

Adult Golden Eagles are seen raising only a single brood in a year.

The breeding season for Golden Eagles

The mating season for Golden Eagles falls between March and August.

Where do Golden Eagles build their nests?

Golden Eagles are not much of tree-dwellers. These raptors choose to breed in open and semi-open landscapes and are known to build their nest on cliffs. Very rarely, you will find them nesting in forests or on manmade structures.

Just like Bald Eagles, Golden Eagles are also quite territorial and will return to their old nests for years.

How many eggs do the female Golden Eagles lay? What do they look like?

The female Golden Eagles lay about four eggs in a brood. Their eggs range from cream to pale pink in color and often contain brown splotches on them. Once these eggs have been laid, the females will incubate them for six weeks until they hatch.

Bald Eagle vs. Golden Eagle: Who would win in a fight?

Both Bald and Golden Eagles are strong and deadly raptors that are highly revered in the avian world. While these eagles do exist within the same geographical locations, they rarely have a motive to fight since both species have different diets and nesting preferences.

The chances of seeing a Bald Eagle and Golden Eagle fight are very few. However, if they ever do engage in fighting, it would be quite interesting to watch since both are almost equally competitive and fierce fighters.

As we’ve mentioned earlier in the article, Bald Eagles are generally larger and heavier than the Golden Eagles. But does it give them an upper edge in a fight? Not necessarily.

While Bald Eagles have the advantage of size and mass, the Golden Eagles are faster and more agile. Some would even say that they are more determined to win a fight than the Bald Eagles.

However, the most important factor that can make Golden Eagle victorious in the fight is its diet. Being a sea eagle species, Bald Eagles are primarily piscivores and carry prey no larger than geese.

On the other hand, Golden Eagles prey on larger land mammals. Due to this reason, the feet and talons of Golden Eagles are much stronger than that of Bald Eagles.

To sum it up, Golden Eagles have a better chance of winning a fight between them and the Bald Eagles.

As we reach the end of the article, I’m sure you have learned a lot about the appearance and lifestyle of both Bald and Golden Eagles. These eagles are not closely related but do exist in overlapping locations within North America.

Bald Eagles are mainly fish-eaters, while Golden Eagles enjoy feeding on mammals the most. Bald Eagles are larger and heavier, but Golden Eagles surpass them in speed, strength, and agility. In the end, both eagles are deadly carnivores that can do considerable damage to you if not regarded cautiously.

Hawk vs Eagle vs Falcon: What’s The Difference?