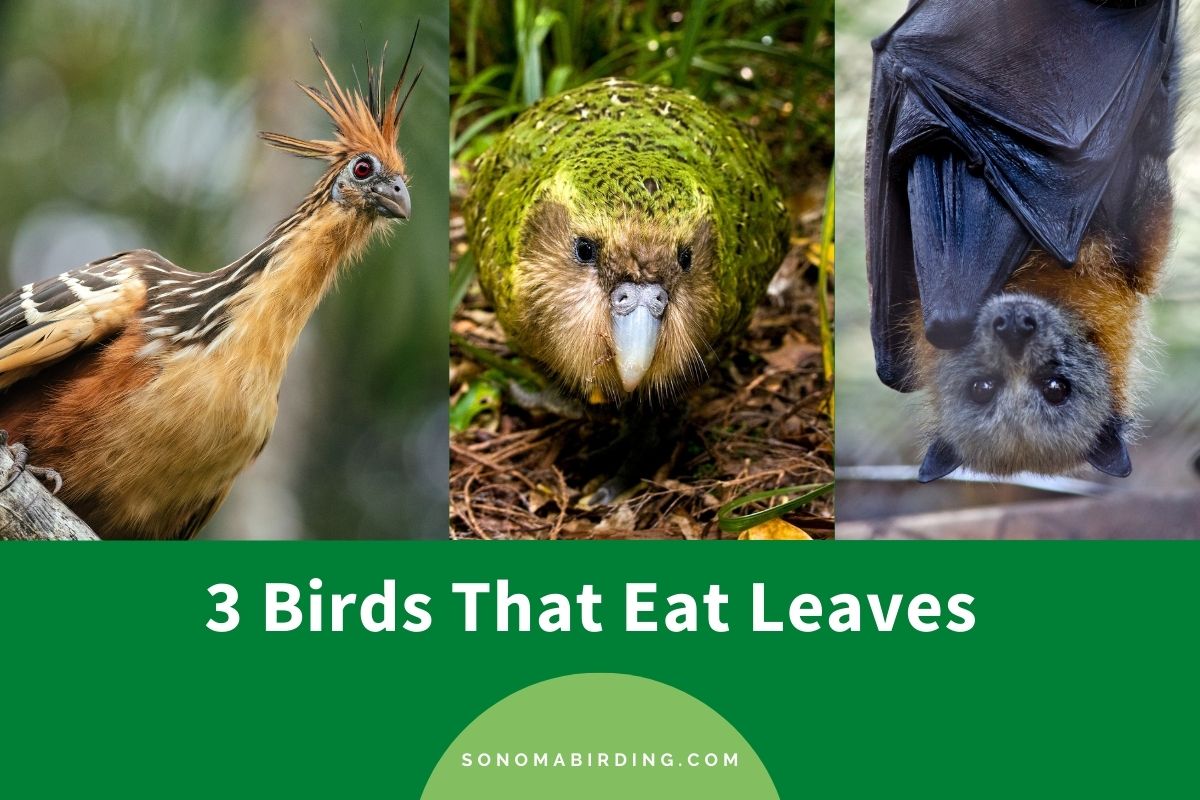 The avian world is filled with diverse birds with diverse lifestyles. Here, you can find birds like swallows that are adapted to an aerial lifestyle, ducks and geese that live in or around water, and flightless birds like ostriches and emus that are fully terrestrial.

In terms of food, birds display a significant diversity, too. Some are pure carnivores, others feed on fruits or nectar, while yet others are primarily insectivores. However, how many of you have heard of birds that are folivores and solely feed on leaves? Well, this article is all about the birds that eat leaves.

Here are some birds that practice folivory (eat leaves), both completely and partially:

Has the term “folivory” piqued your interest? In this article, we will tell you all about this practice and discuss why it is so rare among birds. Later, we’ll also take a look at the folivore birds and their diet in-depth.

Why is folivory so rare among birds?

For those of you who aren’t familiar with the concept of folivory, it is a practice of solely eating leaves for nutrition.

Folivory finds its roots in herbivory. And yet, while there are countless herbivore animals and birds in the world, folivores are very few in number and generally unheard of. Have you ever wondered why? That’s what we will figure out in this section.

Leaves contain about half of the nutrients that you can find in fruits, stems, or other plant materials and a high amount of cellulose, which is quite difficult to digest.

For this reason, any animal or bird that eats leaves will get only a fraction of the energy of what they can get from the other parts of plants. Moreover, because of the presence of cellulose in leaves, only animals that possess longer digestive tracts can digest them, that too at a slower metabolism rate.

In the mammalian family, the creatures that follow folivory include elephants, possums, okapis, giant pandas, koalas, sloths, old-world colobines, and some species of lemurs. Among the new world primates, the only genus that practices folivory are the Howler Monkeys (Alouatta), consisting of 15 recognized species.

When you narrow down to folivory in the avian world, you will find that the practice is even rarer here than in among mammals. There are two major reasons behind it:

It is no secret that the act of flying requires more energy than walking, climbing, or even running. And because birds spend most of their lives flying, they need faster energy sources to keep them fueled.

If birds eat leaves, they will acquire a much lower amount of energy than they could gain from eating fruits, veggies, or insects. This lack of energy can interfere with their flight.

You can notice that the folivorous mammals that we mentioned earlier are large-bodied and possess long digestive tracts.

Since birds are generally much lighter than mammals (to be able to fly), their digestive tracts are much shorter than theirs. This is why it is even more difficult for them to survive by eating leaves.

With all that being said, folivory isn’t completely absent in the avian world; there are some birds that practice it, either completely or partially. Let’s learn more about these birds in the next section.

Birds that indulge in folivory (complete or partial)

While Hoatzin is the only extant bird species in the world that follows an exclusive folivore diet, the Owl Parrots and Mega Bats are also known to indulge in it occasionally. In this section, we’ll learn more about these birds and their diet. Let’s get started: 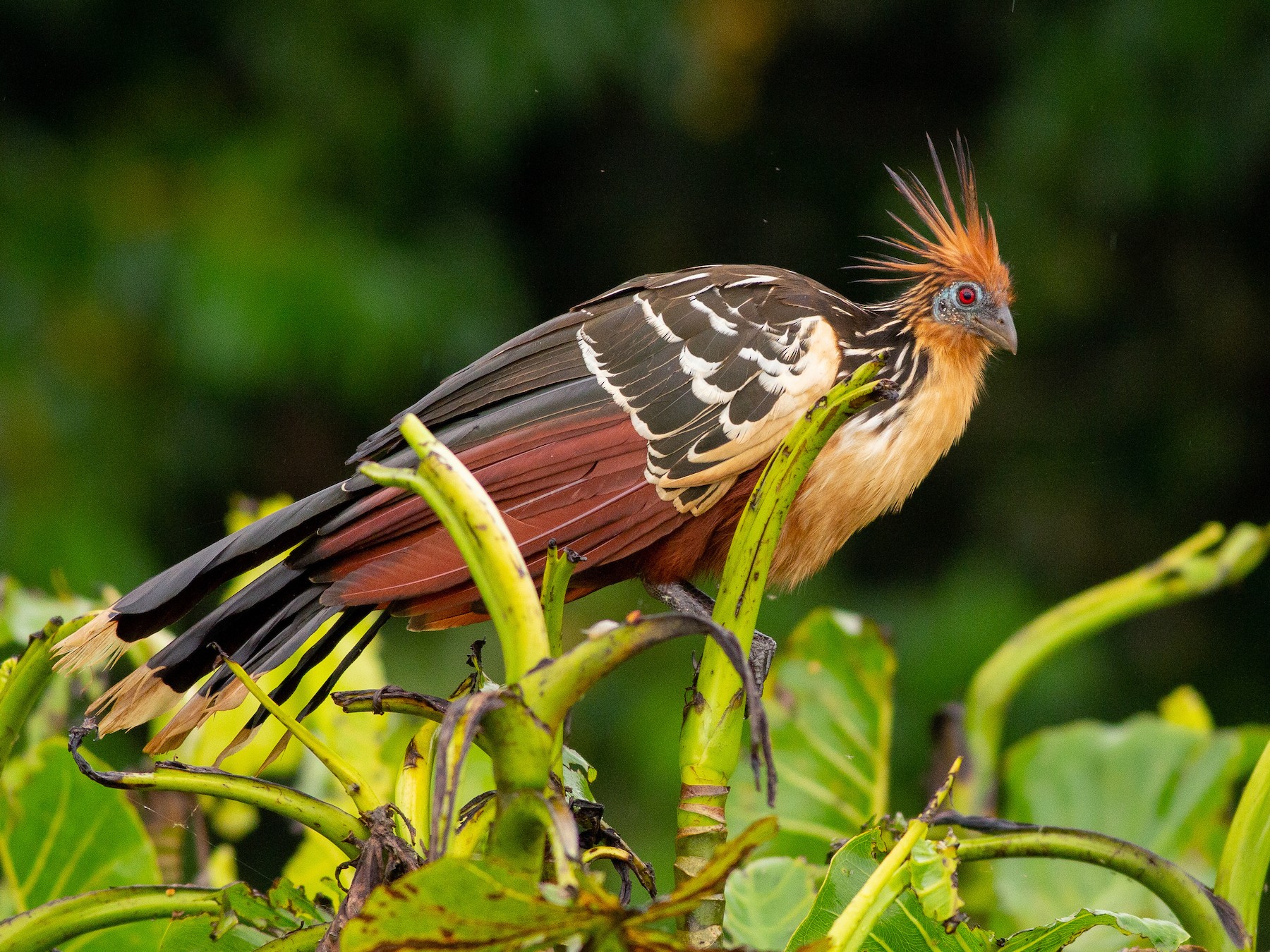 Referred to by several names like “Canje Pheasant,” “Stinkbird,” and “Reptile Bird,” the Hoatzins are large, pheasant-sized birds endemic to South America. These tropical birds dwell in the mangroves, swamps, and riparian forests of the Orinoco and Amazon Basins.

Hoatzins are not only the monotypic members of their genus but also the only surviving genus of the entire Opisthocomidae family.

These birds are significantly small-headed, with a relatively long neck and body. Their upperparts and tail are dark, sooty-brown, while the underparts are pale buff in contrast. You can notice a large, dull brown crest on their head, below which is a featherless blue face with maroon eyes.

In order to digest a leaf-based diet efficiently, the hoatzins possess a unique digestive system. Much like the ruminants and other cattle animals, these birds use bacterial fermentation to break down the cellulose in their food.

However, they don’t possess rumen like the mammals, but a crop, where the fermentation takes place. Their crop is far too large and is folded into two different chambers. Along with it, they also possess a multi-chambered esophagus, with a regular-sized stomach and gizzard.

Also referred to as “Kakapo,” the Owl Parrots are a critically endangered parrot species endemic to New Zealand. These parrots are quite unlike any other parrots you might have come across; they’re flightless, have a nocturnal schedule, and nest on the ground.

Owl Parrots have a large, rotund body with a finely blotched plumage colored in yellow and green. They possess short legs with large feet to help them walk easily. Not only are they the heaviest parrot species in the world, but they’re also considered to be the longest-living birds, with a lifespan of about 100 years.

The diet of Owl Parrots
Owl Parrots also happen to be herbivores, which is very rare in the parrot family. These birds mainly feed on the plants, seeds, fruits, pollen, and even sap from the trees growing in their surroundings. They will occasionally feed on the leaves of these trees as well, stripping them of all nutrition and leaving behind a ball of indigestible fiber. 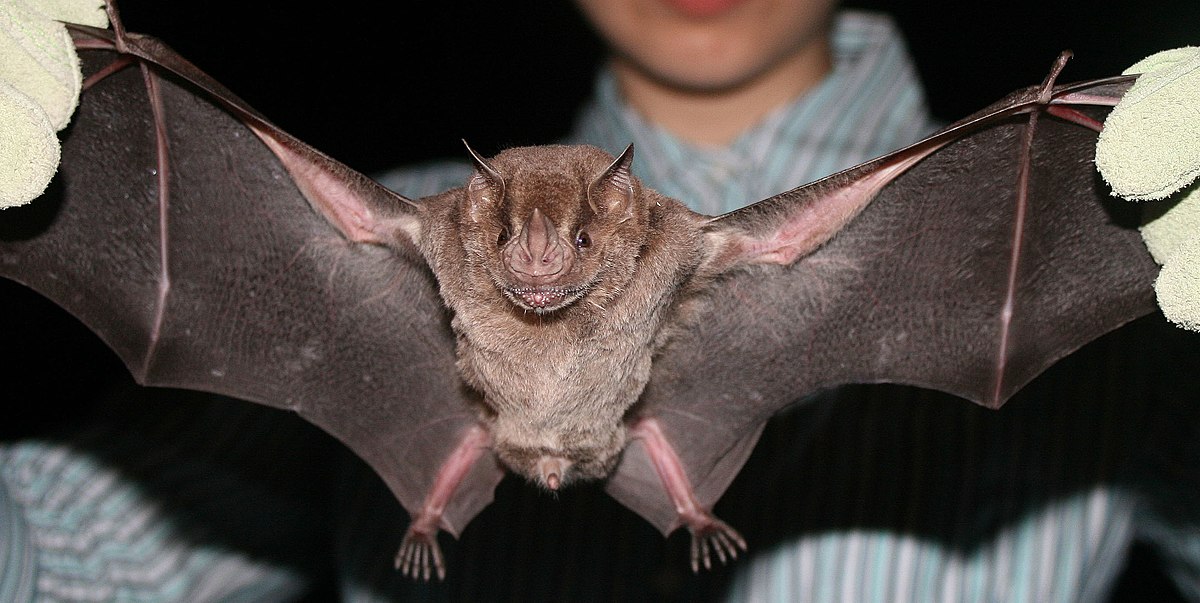 Although bats are mammals and not birds, we include them in this list because they’re capable of flight.

The family of fruit-eating bats is also referred to as the “Megabat family” since all of the largest bat species in the world belong to this family. However, this doesn’t necessarily mean that all fruit-eating bats are large; only one-third population of this family is large-bodied.

The main identifying features of these bats include a dog-like face and clawed second digits. Most megabats also lack the ability to echolocate and are dependent on their sense of sight and smell to find food (with some exceptions).

The family of megabats is quite diverse, consisting of six subfamilies and 46 genera. Now, let’s explore the eating habits of these bats:

The diet of the fruit-eating bats
As their name itself suggests, the fruit-eating bats are primarily frugivores and would consume the fruits of over 180 different plant genera. Being voracious eaters, these bats can eat up to 2.5 times of their own body weight in a single night.

Some species in this family also follow a primary nectarivore diet, feeding on the nectar from flowers. The secondary food sources for these bats include sap, seed pods, buds, pollens, barks, twigs, cones, shoots, and leaves.

In the scarcity of their primary food sources, the megabats will turn to leaves without hesitating. It is because they know that they will never face the scarcity of leaves and have very little competition for it.

If you’re wondering how these bats digest the leaf fibers, the answer is simple: they don’t. Much like the owl parrots, the megabats also chew on leaves and swallow all the liquid present in them (that contains essential nutrition), spitting out the flattened fibrous pellet in the end.

With this, we come to an end of this article. Today, we’ve learned that survival on an exclusive diet of leaves is no easy feat for birds.

Not only do leaves offer little nutrition in comparison to other plant materials, but they’re also very difficult to digest due to the presence of cellulose.

Because of these complexities, there are very few mammals in the world that practice folivory today. And the birds that do it are even rarer because they need faster energy sources in order to help them fly. Hoatzin is the only bird species that draws its nutrition from leaves.

Other birds like owl parrots and the fruit-eating bat family will only resort to eating leaves in rare cases of food scarcity. And when they do eat leaves, they always spit out their indigestible fiber in the end.

Do Birds Have Lungs?

Do Birds Sweat? How Do They Keep Themselves Cool?