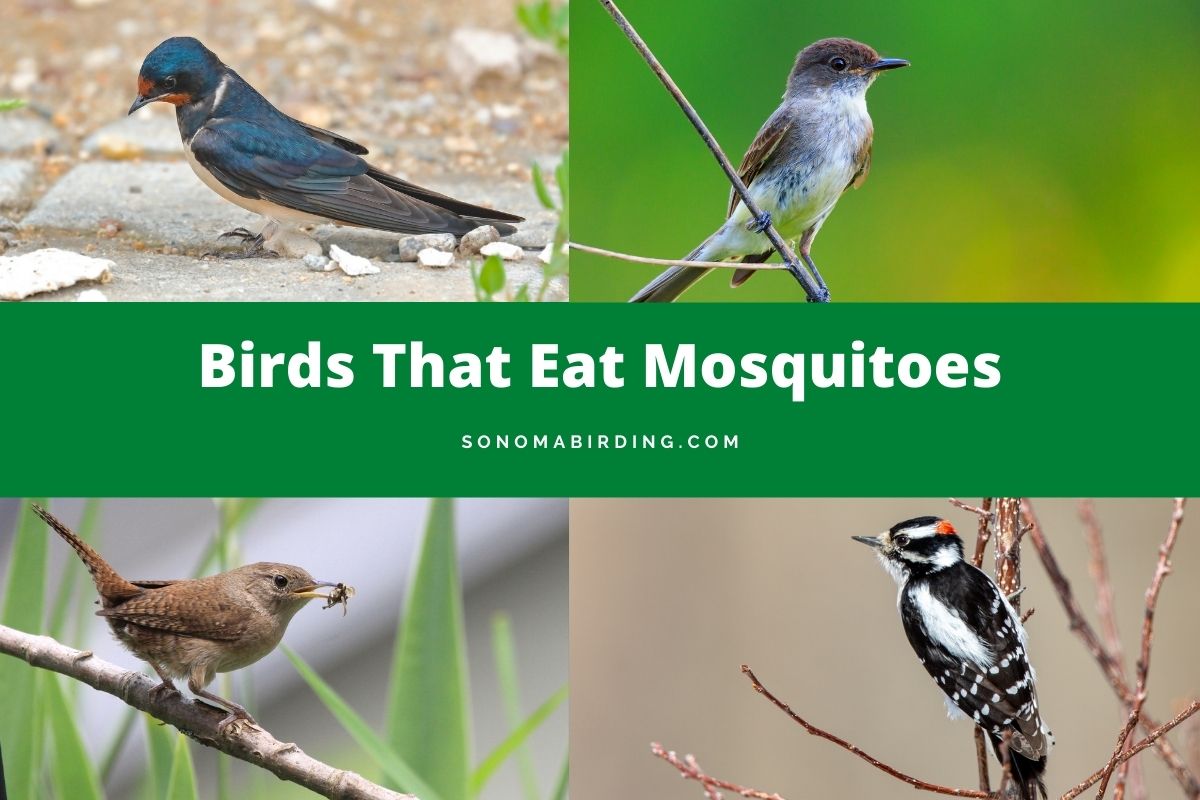 Mosquitoes are a group of flying insects that do not only have a painful sting but are also vectors of numerous transmittable diseases, such as Encephalitis, Dengue, and Yellow Fever.

Because these insects breed in stagnant water, their infestation in your yard or garden is inevitable, particularly during the monsoon.

Did you know that the birds that visit your backyard can also help you get rid of these pesky pests?

Here are the 11 birds commonly found in North America that feed on mosquitoes:

In this article, we will learn in-depth about all these mosquito-eating birds and their diet. Moreover, we will also discuss some tricks and tips for attracting these birds to your yard.

Found in Africa, Asia, Europe, and the Americas, the Barn Swallows are a swallow species with the most widespread distribution in the world.

These swallows have a distinctive appearance which makes them easily recognizable. They have bright, steel blue heads and upper parts, with a bright rufous touch on their face (below the bill), and white underparts.

Their tail is elongated in a manner that makes them appear to be fork-tailed. Both sexes appear similar; only the females have duller plumage and shorter tail streamers.

Yes. Barn Swallows are quite fond of eating insects like mosquitoes. They catch these insects in flight, one mosquito at a time. On average, these birds eat about 850 insects in a single day (roughly 60 insects per hour).

Eastern Phoebes are small, migratory birds found throughout North America. These birds have a quite large head that develops a small crest when puffed up.

Eastern Phoebes have a brownish-grey head, back, wings, and tail, with a white throat and grey underparts. They have a dark bill and buff bars on their wings (one on each wing).

These birds display little sexual dimorphism, with the males slightly larger and more attractively colored than their female counterparts.

Yes. Even though the Eastern Phoebes are omnivores, their favorite meal includes flying insects like wild bees, wasps, air-borne spiders, grasshoppers, and mosquitoes.

House Wrens are the most widespread wren species native to the Americas. These birds are found in all the urban and suburban areas within their range.

These wrens are extremely tiny in size, with a short tail typically cocked upwards. They display minimal sexual dimorphism, with both sexes appearing identical.

Their heads and upper parts range between rufous to greyish brown in color, with an overall heavy streaking. The underparts are dull grey and are relatively unmarked.

Yes. Like most wren species, the House Wrens are also insectivores that actively hunt a large variety of insects.

Downy Woodpeckers are a North American woodpecker species known for being the smallest of woodpeckers within their range.

These woodpeckers have white underparts and black upperparts. Four white streaks run on their otherwise black face (two on each side). They also have a bold white patch on their back (between the wings) and small white streaks on their wings.

Both sexes of these woodpeckers are similar; only the males have a touch of red on their heads, which the females lack.

Yes. Insects make up a large portion of the Downy Woodpeckers’ diet. These birds will eat ants, wasps, beetles, caterpillars, and mosquitoes.

Downy Woodpeckers are often spotted in backyards, catching and feeding on insects.

Red-eyed Vireos are an American songbird species that belong to the New World Warbler family.

These are small birds with a stout bill and thick, greyish legs. Their heads and upper parts are covered in olive green, while the underparts are white.

Just as their name suggests, these birds have rufous-red irises. Both sexes appear similar and display minimal sexual dimorphism.

Yes. Red-eyed Vireos are primarily insectivores, their diet changing with the season. They hunt insects most actively during spring and summer.

Eastern Kingbirds are a large kingbird species belonging to the Tyrant Flycatcher family. These birds are endemic to the Americas and have an overall grey and white body.

Their head, back, wings, and tail are dark grey in color, while their underparts are pale white. Both sexes of these birds appear similar, displaying little dimorphism.

Yes. Eastern Kingbirds are insectivores, with about 85% of their spring diet consisting of insects like mosquitoes, beetles, wasps, grasshoppers, and bees.

Muscovy Ducks are a large, tropical duck species endemic to the Americas. These waterfowl are generally long-clawed and possess a wide tail.

The domestic population of Muscovy Ducks is mainly white, with a bold black patch on their back and their tail feathers. Their bill is red, with faint blackish markings on their head.

Both sexes have a red face and show little dimorphism in terms of plumage. However, they are significantly different in size; the males are considerably larger and heavier than their female counterparts.

Because these waterfowl live in water, they go after the mosquito eggs even before hatching, significantly reducing the mosquito population in their surroundings.

Wild Turkeys are a large, upland game bird species endemic to North America. These birds are the heaviest members of the Galliformes family and have an overall dark and glossy body.

These turkeys are strongly sexually dimorphic in both plumage and size. The males are significantly larger and heavier than their female counterparts and have a bald, red head and throat.

They have dark brown plumage with a coppery gloss on them. The fan tail of these birds is truly majestic; it is colored in shades of purple, green, red, gold, and bronze and appears breath-taking when erect.

On the other hand, the females have a rufous-brown body with a short brown tail bending downwards.

Yes. Although Wild Turkeys are omnivores and usually go after seeds, fruits, and grasses, roughly 10% of their diet consists of animal matter, particularly insects like snails, grasshoppers, beetles, and mosquitoes.

Purple Martins are a large, migratory swallow species endemic to the Americas.

Although these birds are named “purple,” they have a dark, blackish-blue body with an iridescent gloss that appears purple and even green in the sunlight.

The adult Purple Martins are strongly sexually dimorphic, with the males having an entirely dark, glossy body.

On the other hand, the females have a dark head, back, and wings, while their underparts are pale white, covered in faint brown streaks. Both sexes have a slightly forked tail.

Yes. Purple Martins are primarily insectivores and feed on a wide variety of flying insects.
However, mosquitoes make up a small part of their diet due to the difference in their feeding time.

Blackpoll Warblers is a small New World Warbler species that breeds in the northern parts of North America.

These warblers are strongly sexually dimorphic. The males possess their characteristic black cap or crown; the head of the females is covered in a faint, greyish cap.

Male Blackpoll Warblers have a white face and a dark brown back streaked with black. Their undersides are pale white with a lighter streaking.

On the other hand, their female counterparts are duller and have faint streaks on their plumage.

Yes. Blackpoll Warblers are omnivores that feed mainly on spiders, centipedes, and lice. Insects like flies, gnats, and mosquitoes are secondary food sources for these birds.

Although bats are biologically classified as mammals and not birds, their forelimbs are adapted into wings, enabling them to sustain flight. This adaptation makes these mammals the only ones with the capacity to fly.

There are over 1,400 species of bats globally, with a widespread distribution in every part of the world, except extreme cold regions. They are primarily nocturnal creatures.

There are over 40 different bat species found in the United States, out of which only three species are flower-eaters, with the rest being insectivorous.

Following are some of the common bat species found in the country:

Yes. Almost all bat species are predominantly insectivores and thrive on flying insects.

Because they’re nocturnal, just like the mosquitoes, bats are among the top mosquito predators. Most bat species can eat over 8,000 mosquito-sized insects in a night.

Attracting mosquito-eating birds to your yard

Now that you’re familiar with all the major mosquito-eating birds of North America let’s discuss how to attract them.

Although the birds mentioned above belong to different families and groups, they all have something in common: they are insectivores.

Here are some measures you can use to attract the mosquito-eating birds into your yard:

If you’re sprinkling pesticides in your garden or backyard, and the mosquitoes ingest these, the backyard birds that will eat these mosquitoes might fall sick.

And as an avid birder, you’d never want that, right?

Moreover, some pesticides are unhealthy for the birds and the plants and trees in your yard.

Therefore, don’t employ other methods if you’re inclined to let your backyard birdies deal with the mosquitoes.

Whether they eat mosquitoes or not, all birds have the same basic needs: food and water. These amenities can attract almost any bird into your yard.

Therefore, putting up multiple feeders and installing a birdbath (preferably a heated one for the winters) is the most classic and effective way of inviting birds into your yard.

Most of the nocturnal birds, particularly the songbirds, often become victims of bird-window collision due to their tendency to get attracted by light.

And since many mosquito-eating birds are nocturnal in nature, if you invite them into your yard, you must take steps to protect them from window collision accidents.

Here are a few things you can do to achieve it:

In this article, we learned about all the common American birds that actively feed on mosquitoes, including guineafowl and waterfowl.

If you enjoy the company of birds in your yard and want to get rid of these pests, you can invite these insectivorous birds to deal with them naturally and effectively.