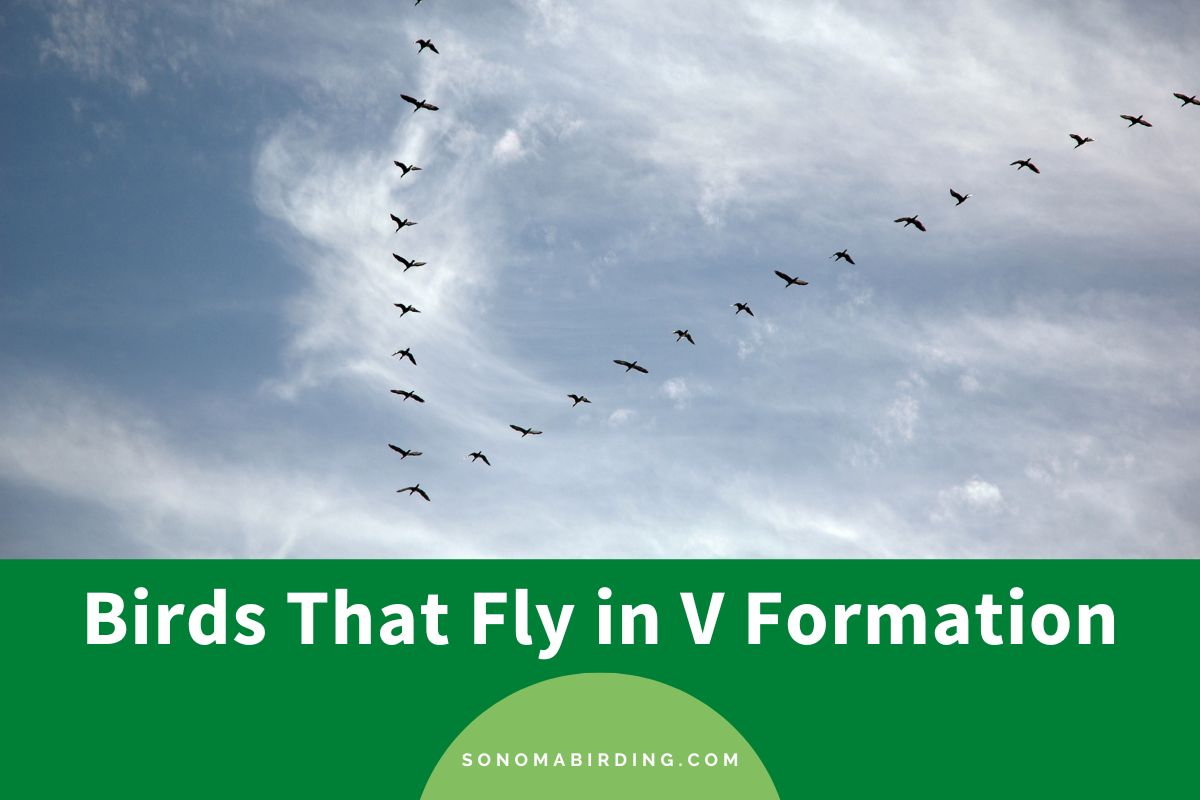 There are very few views in the world that are as satisfying as seeing birds fly in the sky. And if you’re as indulged in this hobby as we are, you’d often have noticed that birds flying in large flocks often form different kinds of patterns in flight.

Some birds move in a circular motion, while others fly in a single line. There are also birds whose flight pattern looks somewhat like an arrowhead moving forward. In the world of birdwatching, this formation is referred to as the V formation.

Have you ever wondered if this flight formation is random or if there could be a logic behind it? If you have, sit tight; in today’s article, we’ll attempt to answer this question and list all the birds that fly in V formation. Let’s get started!

Why do birds fly in V formation?

Before we delve deeper into the birds that fly in V formation, let’s answer a more basic question that might be bubbling up in your head: what’s the logic behind the V formation? Or is there a logic at all?

Well, there is strong logic behind this particular formation, and it’s the same as that of fighter jets flying in V formation: to save energy.

This is what happens in V formation:
When a bird flaps its wings to fly, the action of wing-flapping creates a rotating vortex (a rotating spiral of moving air) rolling off of each wingtip. Both these vortices push air downwards, ultimately making the area a downwash zone.

And while the area right behind the bird’s wing is a downwash zone, the air right behind this area, and on the sides, moves upwards, creating an upwash zone.

Now, if a bird were right behind this bird (in the downwash zone), they’d be pushed downward and would need to work extra hard to stay afloat. On the other hand, if they choose to fly in the upwash zone, the air moving upwards will give them a lift, and they’re able to fly without much effort.

It is for this reason that birds fly in V formation. You’ll also notice how most birds fly in this formation when they’re migrating. This is because, during migration, they need to cover long distances, which is when they can benefit from this energy consumption the most.

7 Birds that fly in V formation

Now that we’ve figured out the why behind the V formation in birds’ flight, let’s move on to learn about some birds you might spot using it. Here are seven birds that are popular for their synchronized V flight formation in the sky: The Canada Geese are large, wild goose species that, although endemic to North America, can be found in many other countries as an introduced species. Although they prefer to reside near fresh water, you can also find them inhabiting brackish water bodies, such as lagoons, estuaries, and marshes.

The seasonal migrations of Canada Geese take place twice a year. Once between September and November, when they’re flying South of their breeding grounds to survive the winters. The other is between April and June, when they return North to breed. 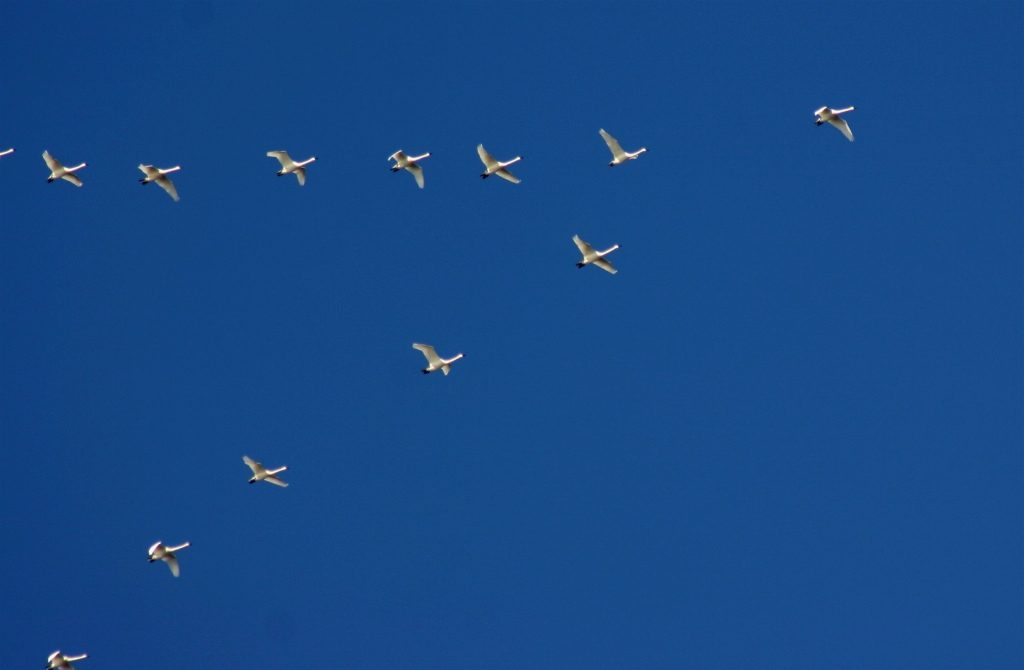 Named after the arctic and subarctic tundra region where they breed, the Tundra Swans are migratory swan species found in North America and Eurasia. While they’re large waterfowl, in comparison to other swan species, they’re quite small.

Tundra Swans begin their migration South right from the end of July; although some populations depart as late as September. The July crowds reach their destination in mid-September, while those who depart in September tend to arrive later in November.

Their journey back North before the breeding season begins in February, and by the end of March, they’re back home already. Also referred to as the Caribbean Flamingo, the American Flamingos are a large flamingo species, the only ones to be the natural inhabitant of America. They’re the second-largest members of the flamingo family and are known for their brilliant pink plumage.

While the American Flamingos (or any other flamingo species) are not naturally migratory in nature, they do cover significant distances at times.

The populations that inhabit lakes at higher altitudes are likely to travel South if their lakes freeze over. Others tend to abandon their habitats to move to newer grounds when they experience food scarcity and are in search of new food sources. 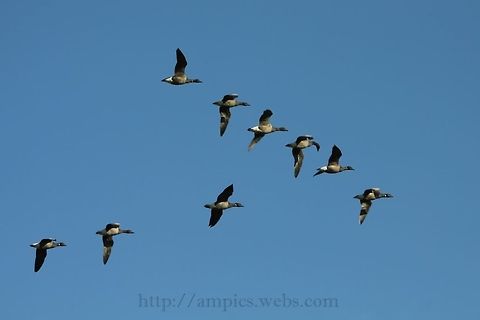 Also referred to as Brent Goose, the Brants are a small goose species belonging to the Black Geese genus. There are three subspecies of these waterfowls, namely Black, Dark-bellied, and Pale-bellied Brant Geese, all of which have minor differences in their appearances.

Brants are strictly coastal waterfowls, both breeding in and migratory to coastal areas. They’re long-distant migrants that travel as far as 3,000 miles before winters. These birdies leave their nesting grounds before mid-September and have reached their winter destination before October ends.

Brants spend a considerable amount of time on their wintering grounds, finally flying back north in mid-April. By June, you can expect to see them back in their breeding habitats.

While these geese are spotted flying in V formation, it’s a rare occurrence among them. Flight in loose groups or wavering lines is more common for them.

Named after the white-feathered crests that appear on their heads during breeding months, the Double-crested Cormorants are a cormorant species found in North America. Like the other members of their family, this species is also highly adaptable and can survive in almost any aquatic habitat with the availability of fish, their main diet.

It is because of their adaptable nature that Double-crested Cormorants do not have to travel too far. These medium-distant migrants only travel from the coolest regions of their habitat range to the ones, where there’s no ice. While migrating in flocks, you’ll often spot them flying in an irregular V formation. 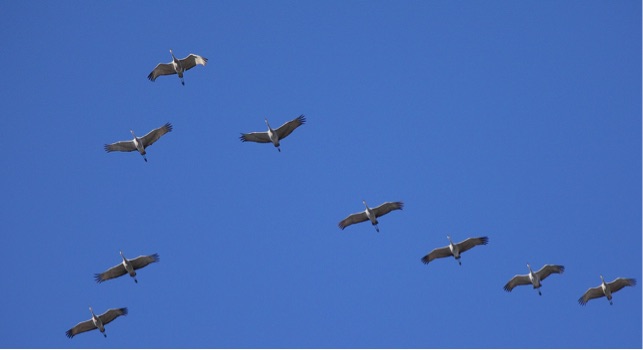 The Sandhill Cranes are a large, social crane species found across North America as well as the Northeastern parts of Siberia. While these birds primarily eat seeds and grains, they’re quite opportunistic feeders and will also consume insects, reptiles, or even small mammals in case of food scarcity.

There are six recognized subspecies of Sandhill Cranes, half of which are migratory and the other half, non-migratory. The migratory population leaves their nesting grounds around mid-to-late October and reaches their wintering destination before November ends.

Their return north during spring begins in February, and they reach their breeding grounds in the middle of April. During both times, their flocks are seen flying in a constantly-shifting V formation. 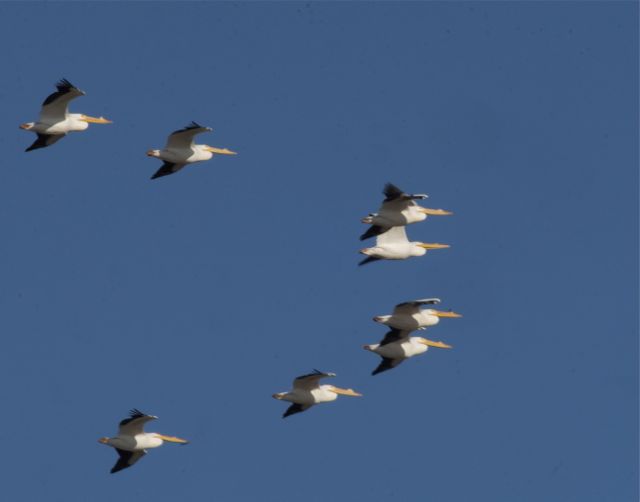 Also referred to as White and Rosy Pelican, the Great White Pelicans are the second-largest members of the pelican family, second only to the Dalmatian Pelicans. These birds breed in shallow lakes and swamps of Asia and Eastern Europe and migrate to northern regions of India and sub-Saharan Africa during winters.

With this, we’ve come to the end of our article. Let’s quickly wrap up our learnings before we part ways.

Our first topic of discussion today was the V flight formation observed among certain migratory birds. We found out how this particular formation wasn’t merely random but had an interesting logic behind it; a logic very similar to the principle used in flying planes.

While it was difficult to get the exact measurements of birds’ flight patterns to study the formation closely, a close inspection has convinced scientists that this style is used for energy conservation. This makes a lot of sense because the migratory birds that practice the formation could certainly benefit from saving some energy for their long travels.

We’ve also mentioned seven birds that are known to fly in V formation in the end. Is there any other flight pattern that has caught your attention? Tell us about it in the comments; we’ll dig into it and fetch you more interesting revelations.