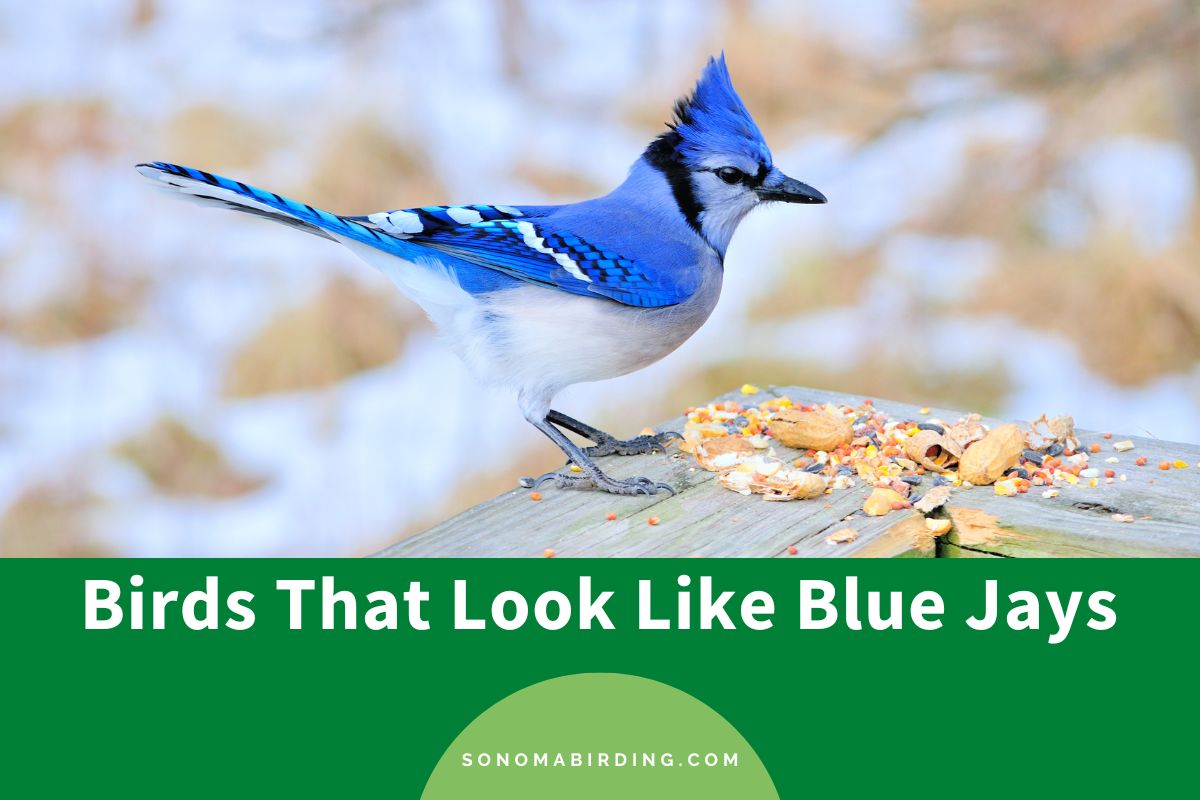 One of the most beautiful corvids of North America, the Blue Jays are striking not just for their appearance but also for their intelligence.

These beauties with brains have stellar mimicking abilities, can easily tell their own eggs from that of other birds (unlike the many victims of brood parasitism), and have also been known to wield tools.

This might sound surprising, but Blue Jays aren’t even blue in color! The pigments in their feathers are actually brown and appear blue due to refraction. All these extraordinary facts can make it seem like there’s no one else like them in the avian kingdom. But is that really true?

While the appearance of a Blue Jay is quite unique, there are many other species that could easily be mistaken for them. In today’s article, we’ll talk about such birds. Let’s get started! 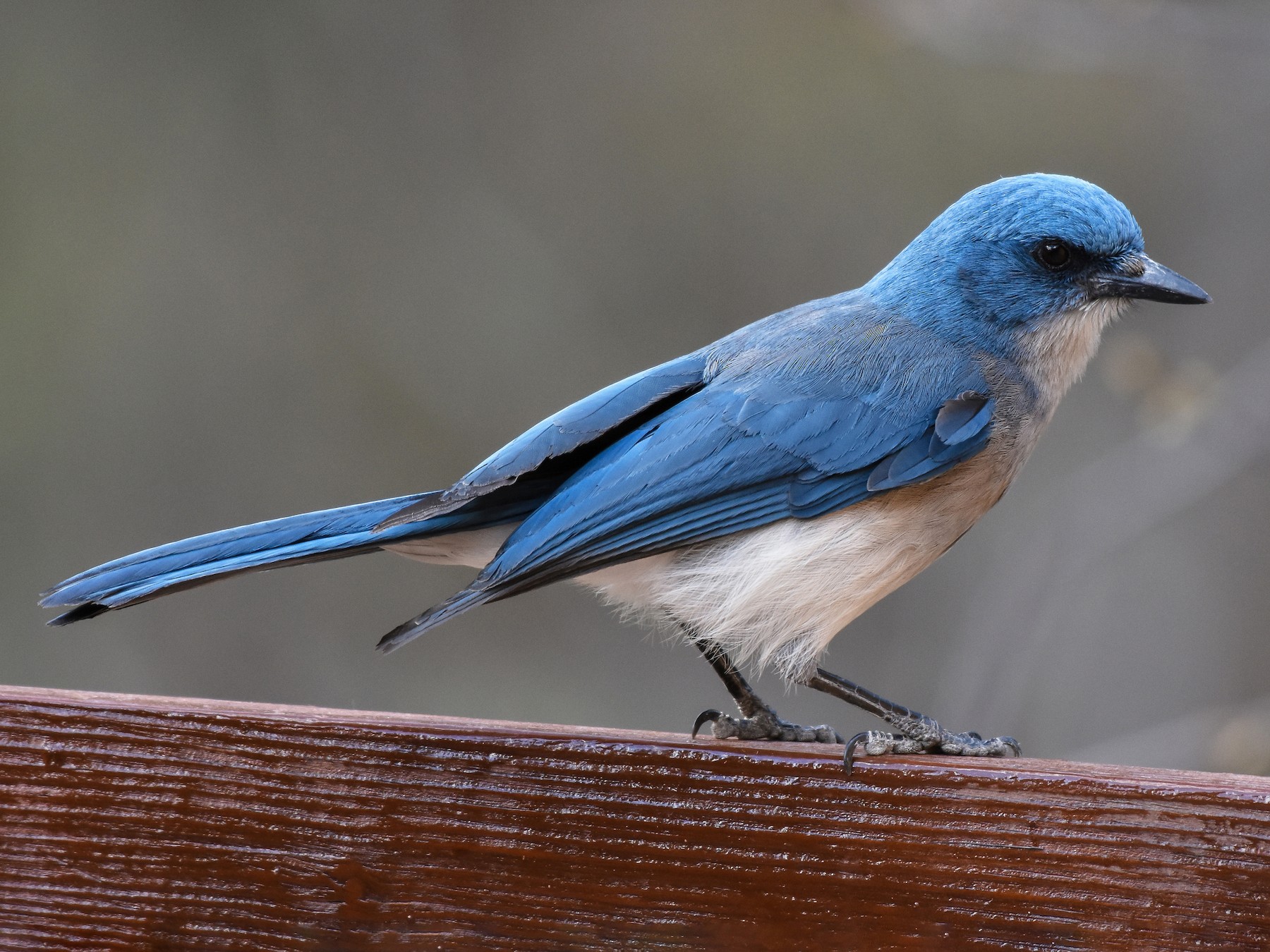 The Mexican Jays are a New World Jay species named after their nativity to the northern mountain ranges of Mexico. You can also find them in the southwestern region of the United States.

Much like the other jays, these birdies are also medium-to-large passerines with blue heads, wings, and tails. Their mantle is covered in bluish-grey feathers, while their breast and undersides are pale grey. They have dark brown eyes with black bills and legs.

Both sexes of this species have identical appearances and are sexually monomorphic. While Mexican Jays resemble Blue Jays in size and mass, their overall plumage coloration is much darker and duller than the latter. Unlike the Blue Jays, their wings and tails bear no markings, and their heads are crestless. 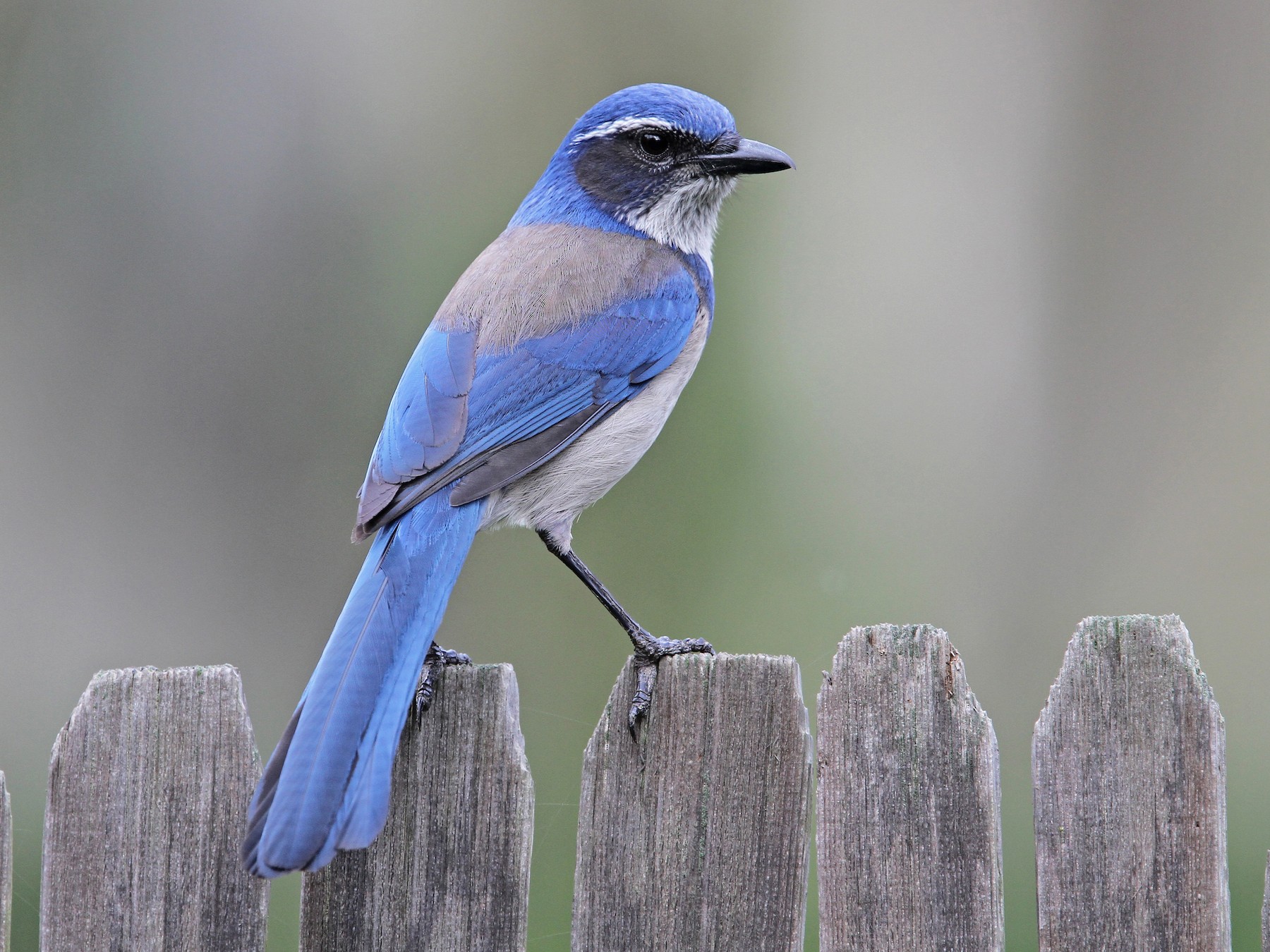 Named after their abundant population throughout California, the California Scrub-Jays are a scrub-jay species endemic to North America. These jays are closely related to the Mexican Jays and appear quite similar to them as well.

Their heads and throats are blue, with dark grey patches around each eye and a white throat patch. The rest of their underbody is also white, in contrast to their grey mantles, blue wings, and tails.

Displaying no dimorphism, both sexes of this species appear identical and possess dark eyes, bills, legs, and white eyebrows.

California Scrub-Jays resemble Blue Jays in their coloration. Both birds possess blue heads and upper bodies combined with white underparts. Their lengths and body mass are nearly the same as well.

However, their faces are much darker and less distinctive than the Blue Jays. They also lack the crest that the latter possess. 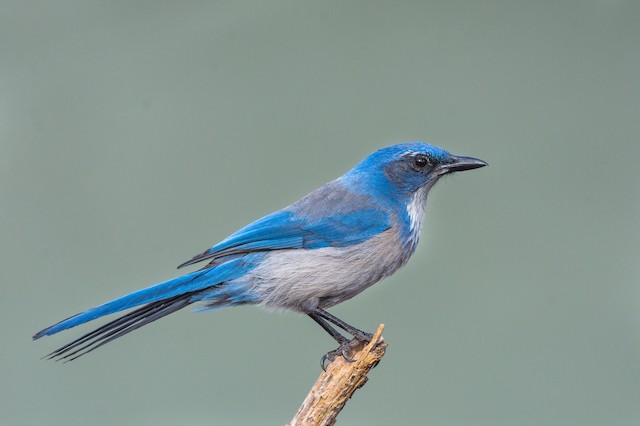 Named after the American Naturalist, Samuel Woodhouse, the Woodhouse’s Scrub-Jays are mid-sized scrub jays endemic to the western regions of North America. These birds were considered conspecific with the California Scrub-Jays until recently, and it shows in their appearance.

Just like their Californian relatives, these jays also possess blue heads and upper bodies with grey underparts. However, both colors of their plumage are much darker than the latter. On their throats, you’ll spot a light blue necklace. Their eyes, bills, and legs are all dark grey in color.

Both sexes of adults have identical appearances and lack any external dimorphism.

While Woodhouse’s Scrub-Jays might be similar in size and body mass to the Blue Jays, their plumages are significantly different.

Their crestless heads, wings, and tails are covered in a darker shade of blue than that of the Blue Jays. Their underbodies are also much darker in comparison to the latter, with no traces of white whatsoever. As their name suggests, the Florida Scrub-Jays have found an almost exclusive habitat within Florida. These birds are listed as a vulnerable species by the IUCN, with the urban development of Florida being the main threat to their dwindling populations.

Both sexes of this species are identical and possess blue heads with white crowns, throat patches, and fainting eyebrows. Their wings and tails are blue with grey edges, while the mantle and lower body are stark white. Their eyes, bills, and legs are all dark greyish.

Of all the birds we’ve talked about so far, the shade of blue in the plumage of these scrub jays resembles that of the Blue Jays most closely. However, there are no markings or streaks on their plumage, which sets the two apart. 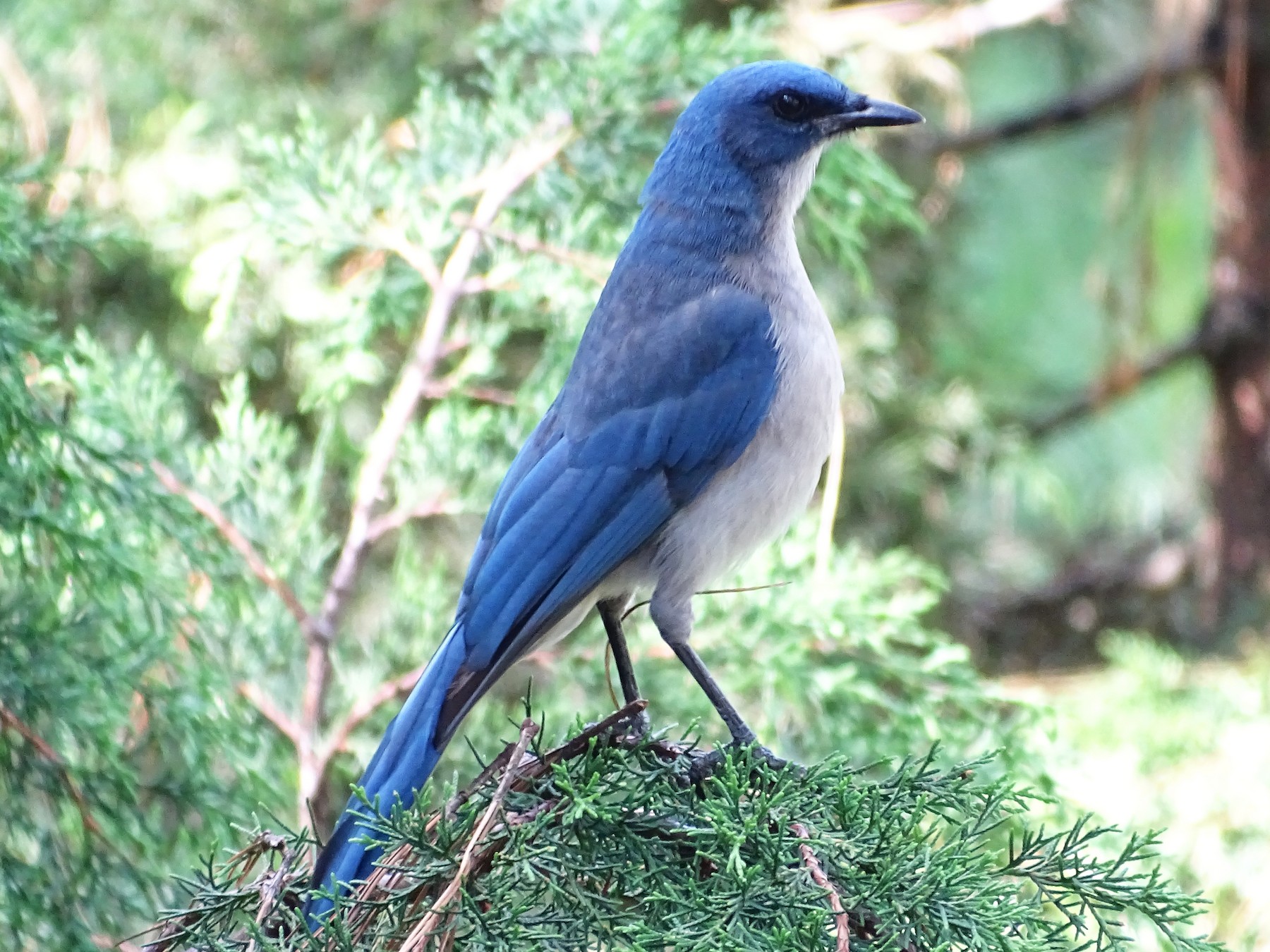 The Transvolcanic Jays have been named after their nativity to the transvolcanic belt of central Mexico. These birds have a primarily white-and-blue-plumage, with blue heads, backs, wings, and tails combined with white underbodies.

Their mantle is bluish-grey, with touches of grey around their eyes. Both sexes of adults are monomorphic and appear identical. Their eyes, bills, and legs are all black.

Trasnvolcanic Jays possess blue heads and upper bodies with white undersides, just like the Blue Jays. However, unlike the latter, their plumage lacks any patterns and is quite plain. Their heads are also crestless, unlike the crested Blue Jays. Named after their primary diet of pinyon pines, the Pinyon Jays are a vulnerable jay species endemic to North America. These birdies dwell in the pinyon-juniper woodlands within their range and are seldom found in urban settings.

The physical features of Pinyon Jays have more similarities to the nutcrackers than the other jays, which makes sense, provided the similarity in their habitats. Their entire plumage is bluish-grey, with their heads being the brightest blue. The underbody is a pale mix of blue and grey, while their wings and tails are dark greyish.

The adults are sexually monomorphic and have identical sizes and plumage.

The similarities between Pinyon and Blue Jays include blue heads and upper bodies, dark eyes, legs, and bills. Both jays are of roughly the same size and weight as well.

Here are some major physical differences between the two: 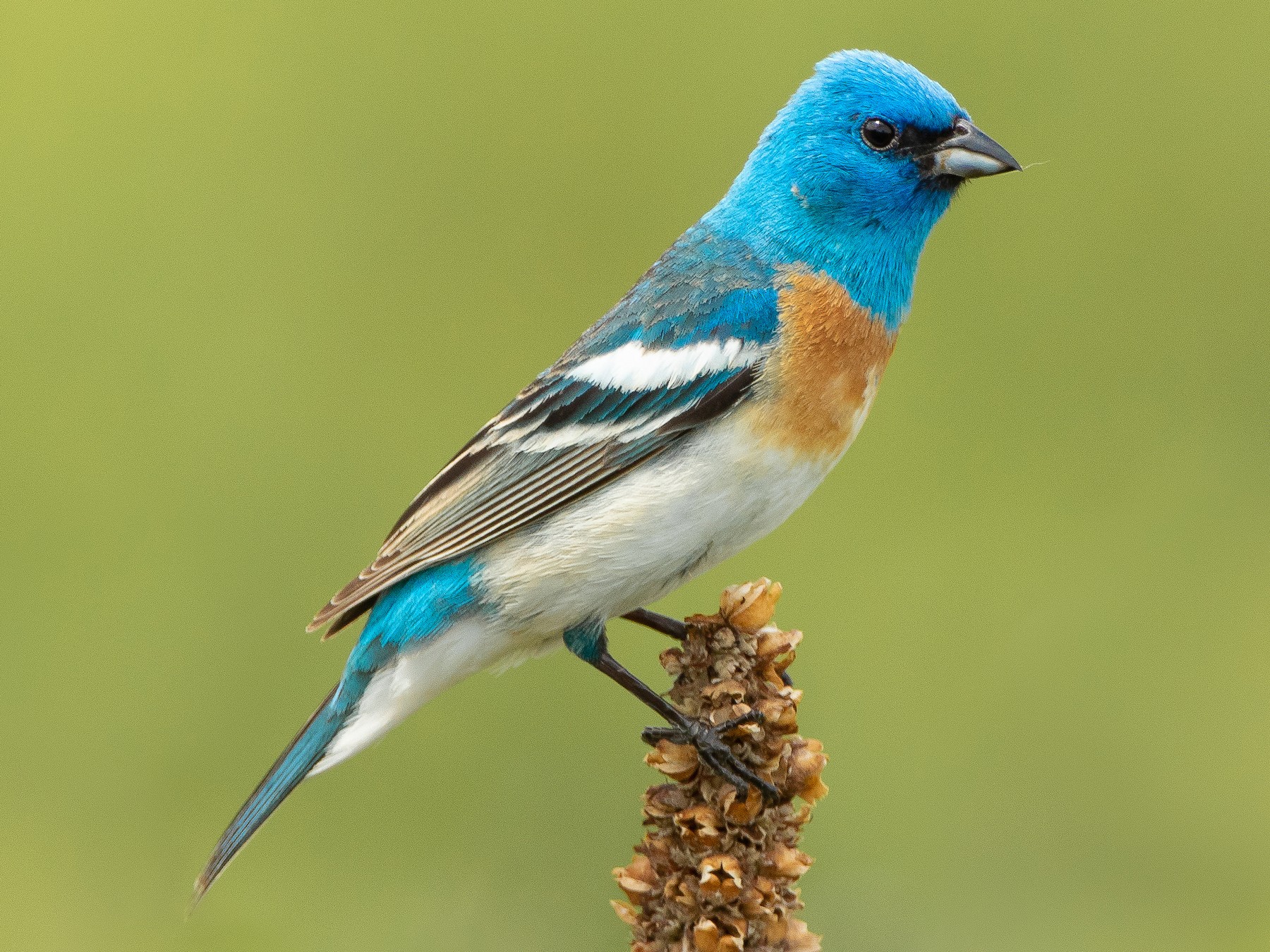 Named after the blue gemstone lapis lazuli, the Lazuli Buntings are a North American bunting species that are closely related to the Indigo Buntings.

The adults of this species display a significant dimorphism in their plumage. The males have their namesake, lapis-colored heads and upper bodies, with darker wings and tails. Their chests have a rusty wash, while the bellies and rumps are white.

On the other hand, their female counterparts have greyish-brown heads and upper parts with pale buff underbodies. Both sexes possess dark eyes, grey conical bills, and legs.

While Lazuli Buntings might resemble Blue Jays from a fair distance, the two have very little in common. First and foremost, they’re much smaller in size than the jays. Their heads are crestless, with conical bills instead of the thin, pointed beak of the latter. Lastly, the brown wash on their chests is also absent in the jays. Named after the German naturalist Georg Wilhelm Stellar, the Stellar’s Jays are an American jay species known by many different names, such as Pine Jay and Long-crested Jay. These birds are endemic to the mountains of Central America. Within North America, you’ll only spot them in the western regions.

Just like the other jays, Stellar’s Jays are sexually monomorphic and possess dark, almost black or dark blue heads (varies among the subspecies). This dark coloration slowly fades into a lighter, silver-blue chest and ends in lighter blue rumps, wings, and tails.

Both their eyes and legs are dark, with dark, sharply pointed bills and white eyebrow patches. They also have light blue forehead streaks that are easily visible against their dark heads.

Stellar’s Jays are closely related to the Blue Jays and share several similarities. Both these corvids have a significant amount of blue in their plumages with similar legs, bills, and eyes. Both their wings and tails are banded, although those of the Blue Jays are more prominent.

Stellar’s Jays also possess a crest atop their head like the latter, although theirs is considerably dark in color. The most significant difference between the two is their dark head and underparts, which are white in Blue Jays. 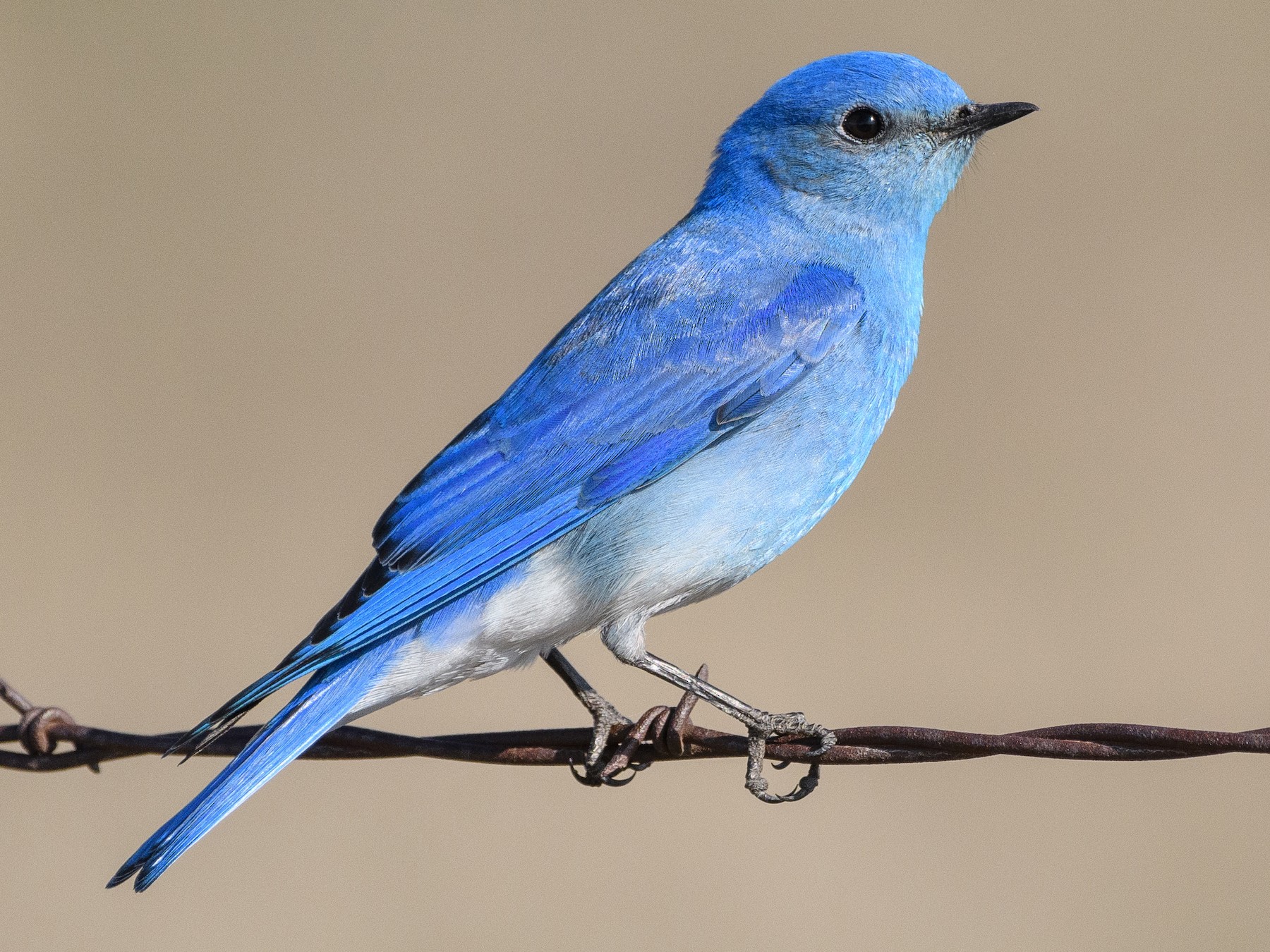 The Mountain Bluebirds are a small North American thrush species that inhabit the mountainous areas within their range. These birds are closely related to the Eastern and Western Bluebirds and resemble their appearance closely as well.

Mountain Bluebirds display sexual dimorphism in their plumage, with the males having turquoise blue heads, backs, underbodies, with white lower bellies. On the other hand, their female counterparts have olive-grey heads and lower bodies, while their wings are a duller shade than the males. Both sexes have dark eyes, bills, and legs.

Mountain Bluebirds can only be confused for Blue Jays when seen in flight or from a fair distance due to the presence of blue in their plumage.

Up close, these birds share no physical similarity. Mountain Bluebirds are much smaller and lightweight than Blue Jays, with their plumage harboring a darker shade of blue than that of the latter. They also have much plainer faces in comparison to the latter, with no marking or streaks whatsoever. 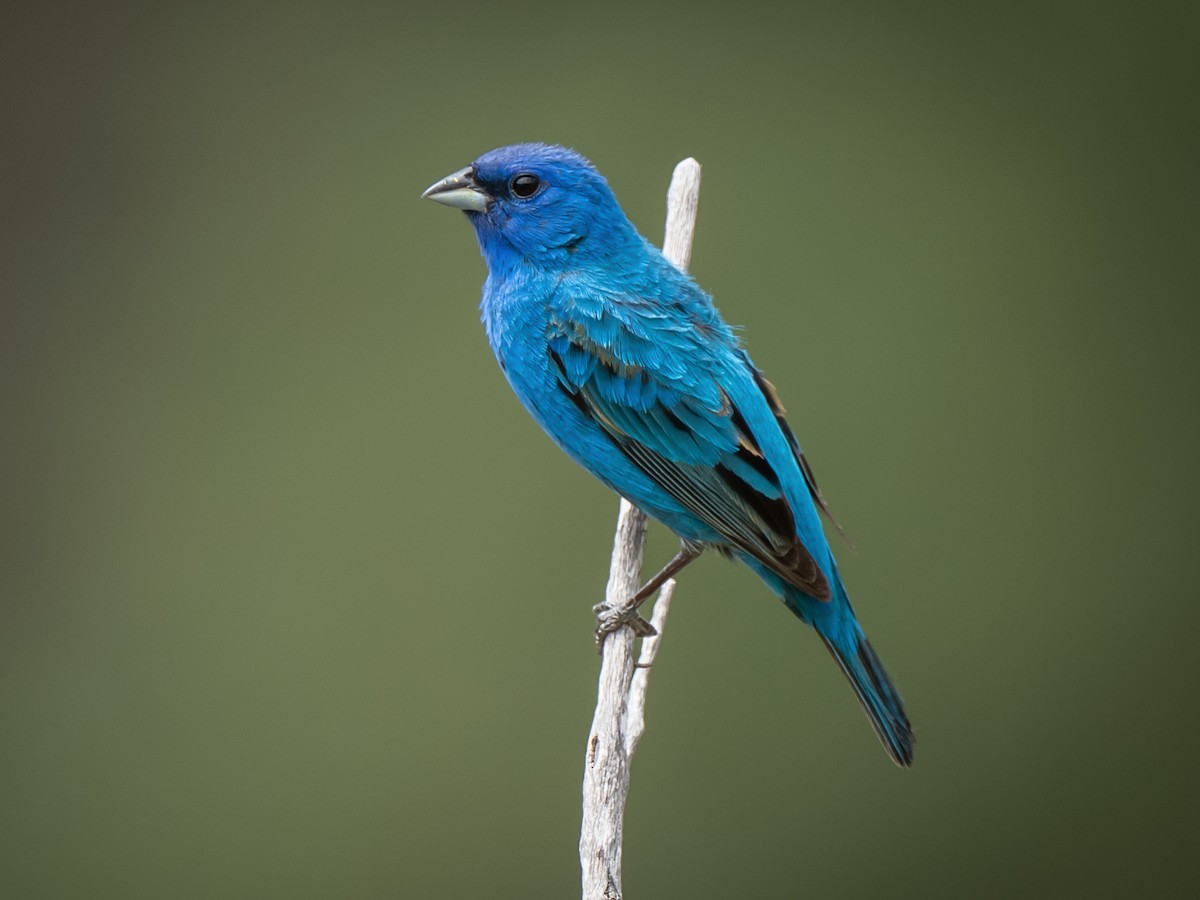 Endemic to North America, the Indigo Buntings are a granivore bird species belonging to the Cardinal family. These birds display sexual dimorphism in their plumage and have been named indigo after the vibrant summer plumage of the males.

While the female Indigo Buntings sport the same brown head and upper body with paler undersides all year, the plumage of the male counterparts undergoes changes with seasons.

In summer (their breeding months), the males grow a bright, cerulean blue plumage with an indigo head. Their wings and tails are black with blue edges, and so are their eyes and legs.

The bills of both sexes vary as well; while the males have a brownish-black upper mandible and light blue lower mandible, the bills of the females are pale brown.

Because of their blue plumage, the Indigo Buntings might be confused with Blue Jays from a distance or in flight. However, up close, the two are completely different.

Here’s how you can distinguish between the appearance of these two:

Let’s quickly walk you through everything new we’ve learned today before we take your leave.

We began by talking about what wonderful creatures blue jays are and discussing the traits that set them apart from other birds. Then, we moved ahead to explore other birds, both corvids and otherwise, that could resemble Blue Jays in flight or from a distance.

Above, you’ll also find detailed descriptions of their physical features as well as their similarities and differences from Blue Jays. If there is another bird whose lookalikes you might be curious about, let us know in the comments, and we’ll be back with a detailed list for you soon!

11 Red-Headed Birds in Hawaii (With Photos)

17 Winter Birds in Missouri (With Photos)

14 Winter Birds in Massachusetts (with pictures)