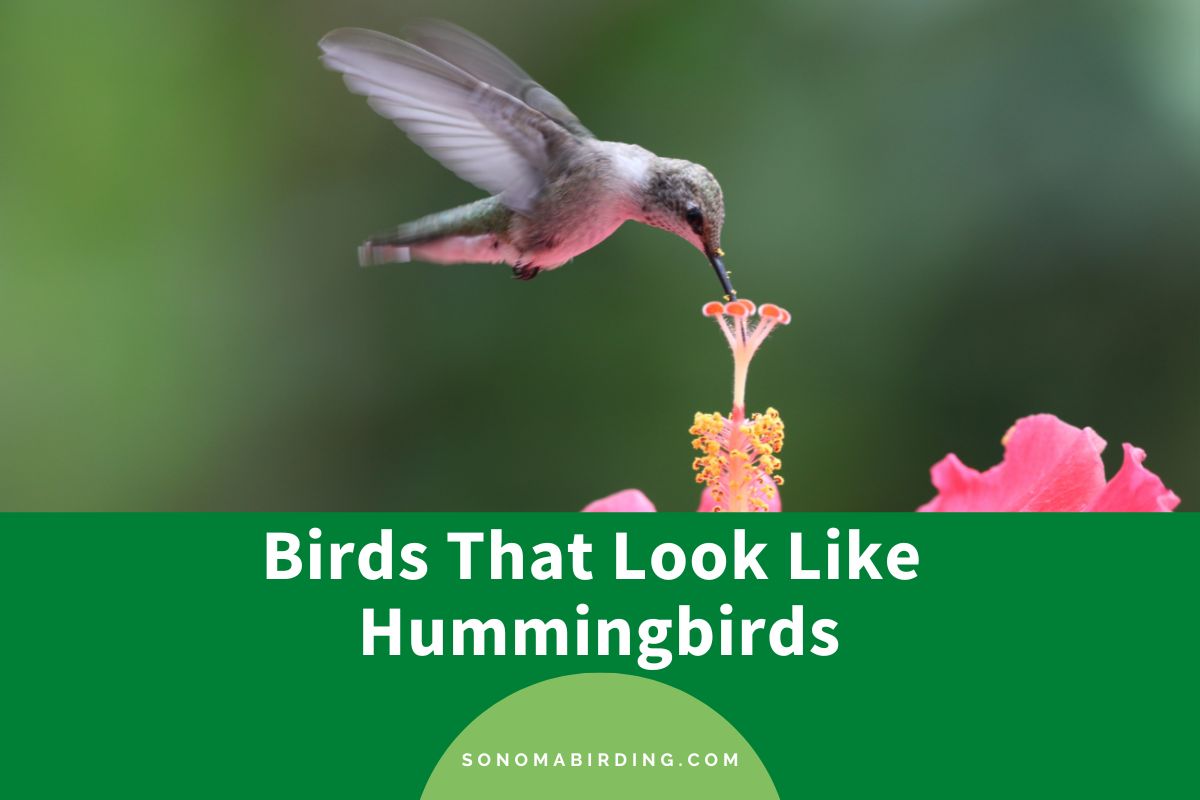 Hummingbirds are usually easily distinguishable by their ability to hover in midair and by their long bills, both of which they use to feed on flower nectar. Despite this, there are several bird species that, despite not being hummingbirds, share many similar traits due to reasons such as convergent evolution.

In this article, we’ll be going over 12 of these bird species that may look like hummingbirds at first glance but are different in more ways than one. 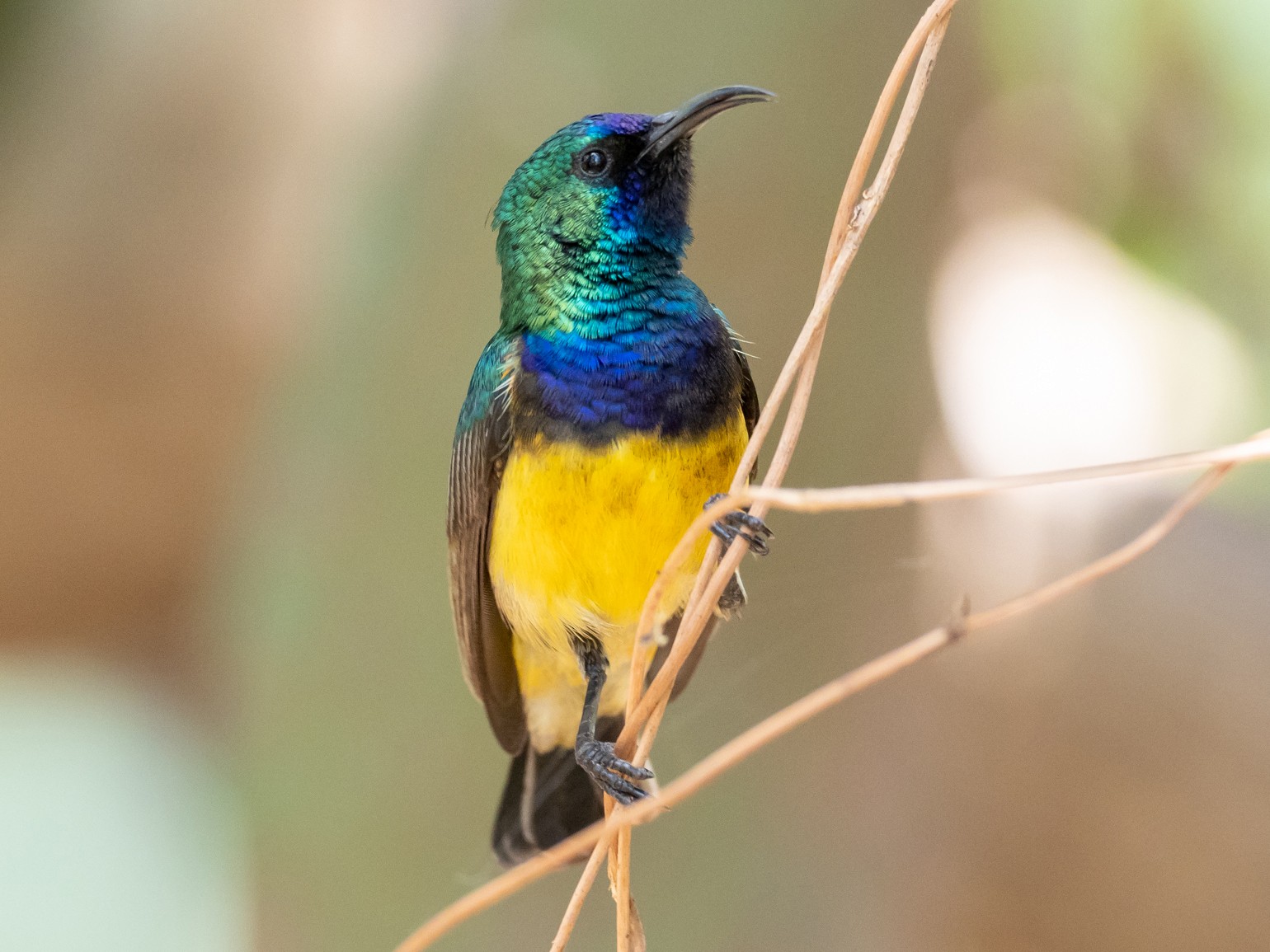 Range: Middle Africa (from Guinea to Ethiopia to as far south as Zimbabwe)

They can be found in a variety of habitats, from thorn scrub to savannas. They feed primarily on nectar and occasionally on insects.

As mentioned, the variable sunbird and hummingbird both share a love for nectar. In addition, they’re both small, colorful, and very active during the day. Despite these similarities, the two birds are not related, and the shared traits are a product of convergent evolution.

The most notable difference between the two is that sunbirds feed primarily while perching, whereas hummingbirds feed while hovering. 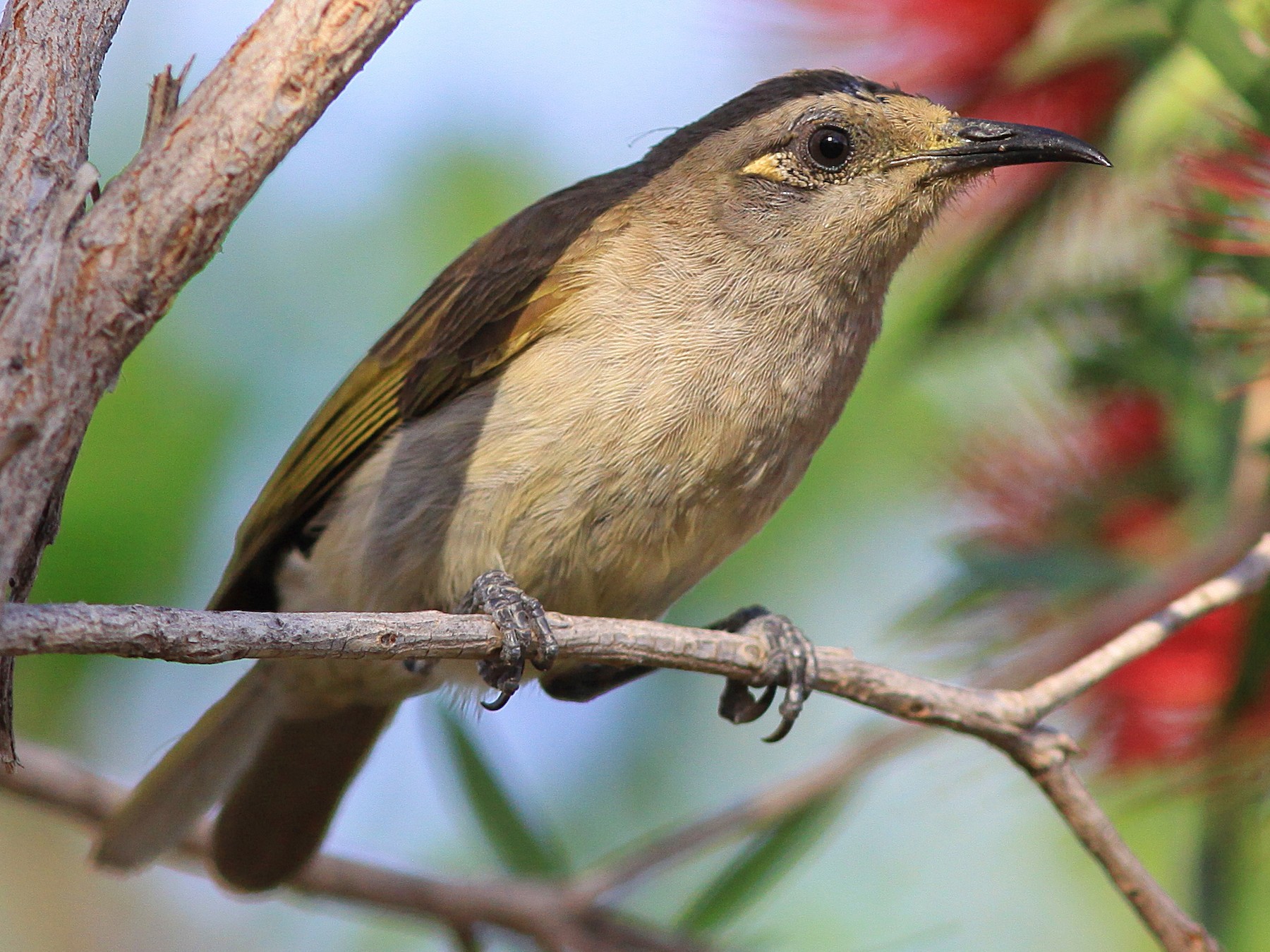 The brown honeyeater has a small, triangular-shaped tuft of yellow feathers behind the eye (which can appear black depending on the angle) and a yellow panel in the wing.

They are endemic to Australia and can be found in a variety of habitats, such as mangrove forests, parks, and arid inland areas. They feed on a combination of nectar and insects.

Unlike the hummingbirds, the brown honeyeater’s diet consists of fruits as well. Compared to hummingbirds, they’re also more insectivorous. Overall, these birds are also larger than hummingbirds and, like the variable sunbird, also perches while feeding.

Finally, as these birds tend to focus more on insects than nectar, predation is more common among them compared to hummingbirds. Hummingbirds, on the other hand, display more territorial defense towards their flowers than honeyeaters do. 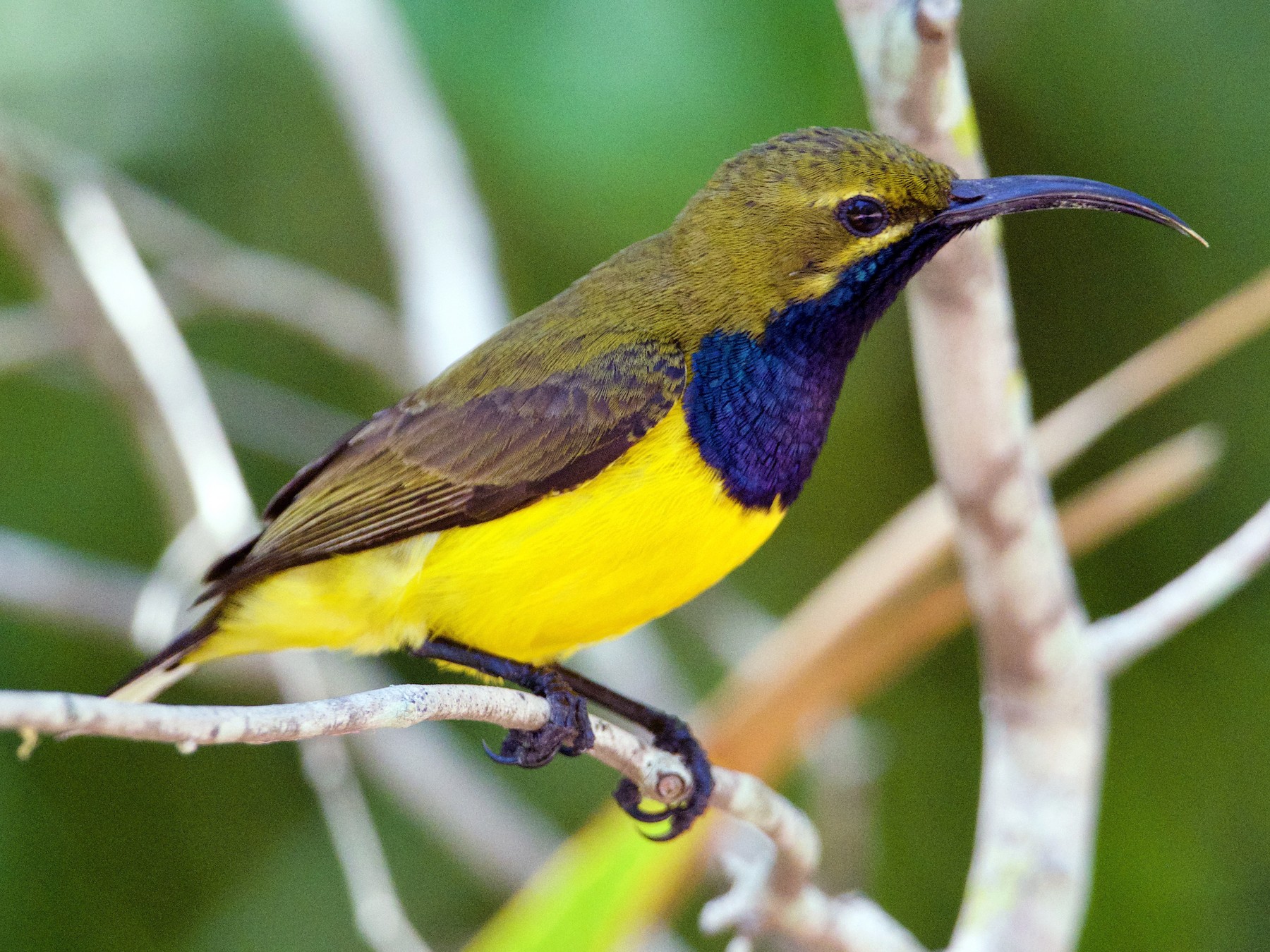 The olive-backed sunbird is a small bird (approximately 12 cm long) that features a down-curved bill and, for the male, a yellow olive plumaged head, yellow supercilium, and iridescent gorget, while the female is a little paler and lacks the iridescent gorget.

Because they prefer any place that has nectar-bearing flowers, this species inhabits a variety of habitats ranging from woodlands to parks and gardens. The olive-backed sunbird tends to forage in foliage and flowers to pluck invertebrates from the leaves or take nectar from flowers using its long bill.

Similarities between the Olive-backed sunbird and the hummingbird include the fact that they both feature long bills and, due to that, both feed on nectar. They’re also of a similar size. From afar, they can also be mistaken because both tend to hover over flowers while feeding on nectar.

As the Olive-backed sunbird is one of the few sunbirds that hover while feeding on nectar, it can be a bit difficult trying to differentiate it from the hummingbird. However, looking closer at its bill, one can see that it has a more curved shape at the tip compared to the often straight bills of the hummingbird.

Range: Throughout Asia and Southeast Asia

The crimson sunbird is a medium-sized sunbird that, for males, consists of a bright red plumage over the body with a dark gray belly and iridescent blue cap, and for females, a paler olive-yellow overall with bright underparts.

They inhabit primarily forests, parks, and gardens throughout Asia and Southeast Asia. They feed primarily on nectar while preying on insects to feed their young.

With an all-red plumage, the crimson sunbird may resemble the ruby-throated hummingbird at first sight, especially in the head and neck areas. This species is also of a similar size to the average hummingbird and has a similar-looking long, slender bill.

Unlike the ruby-throated hummingbird, which only has red plumage on its head and neck, the crimson sunbird has red plumage throughout its body. Traditional to sunbirds, this species also has a slightly curved bill compared to the straight bills of hummingbirds. Finally, though this species can hover to feed on nectar, it’ll usually prefer to perch on the flower. 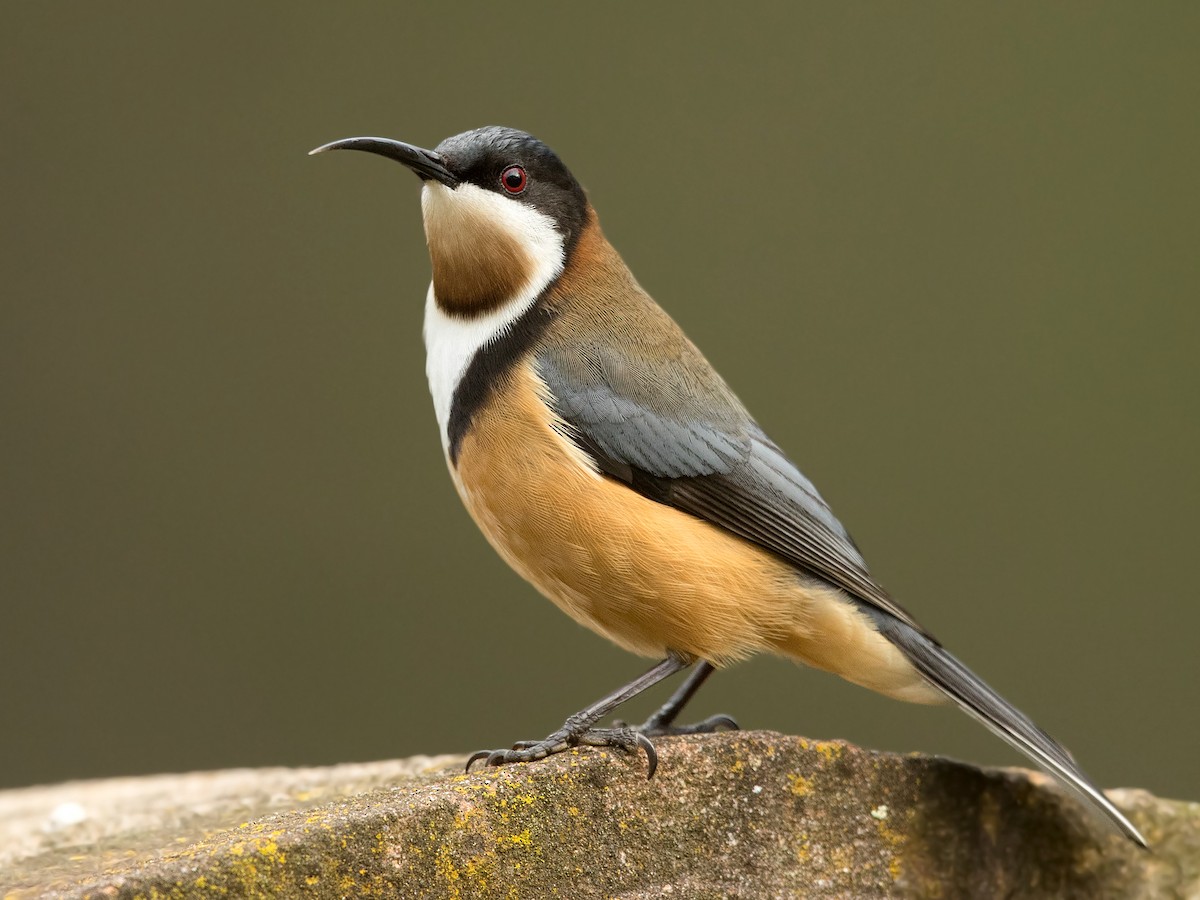 The eastern spinebill is a small bird with a long, curved bill, a dark cap (black on males, gray on females), and a mask with dark streaks on the side of the chest. Their habitat consists of flowering trees in humid forests as well as in parks and gardens. They feed primarily on nectar but will consume insects on occasion.

Unlike hummingbirds, the bill of this species is noticeable more curved and slightly shorter. They also consume nectar while perched (though they do hover occasionally), something that is rarely seen in hummingbirds. 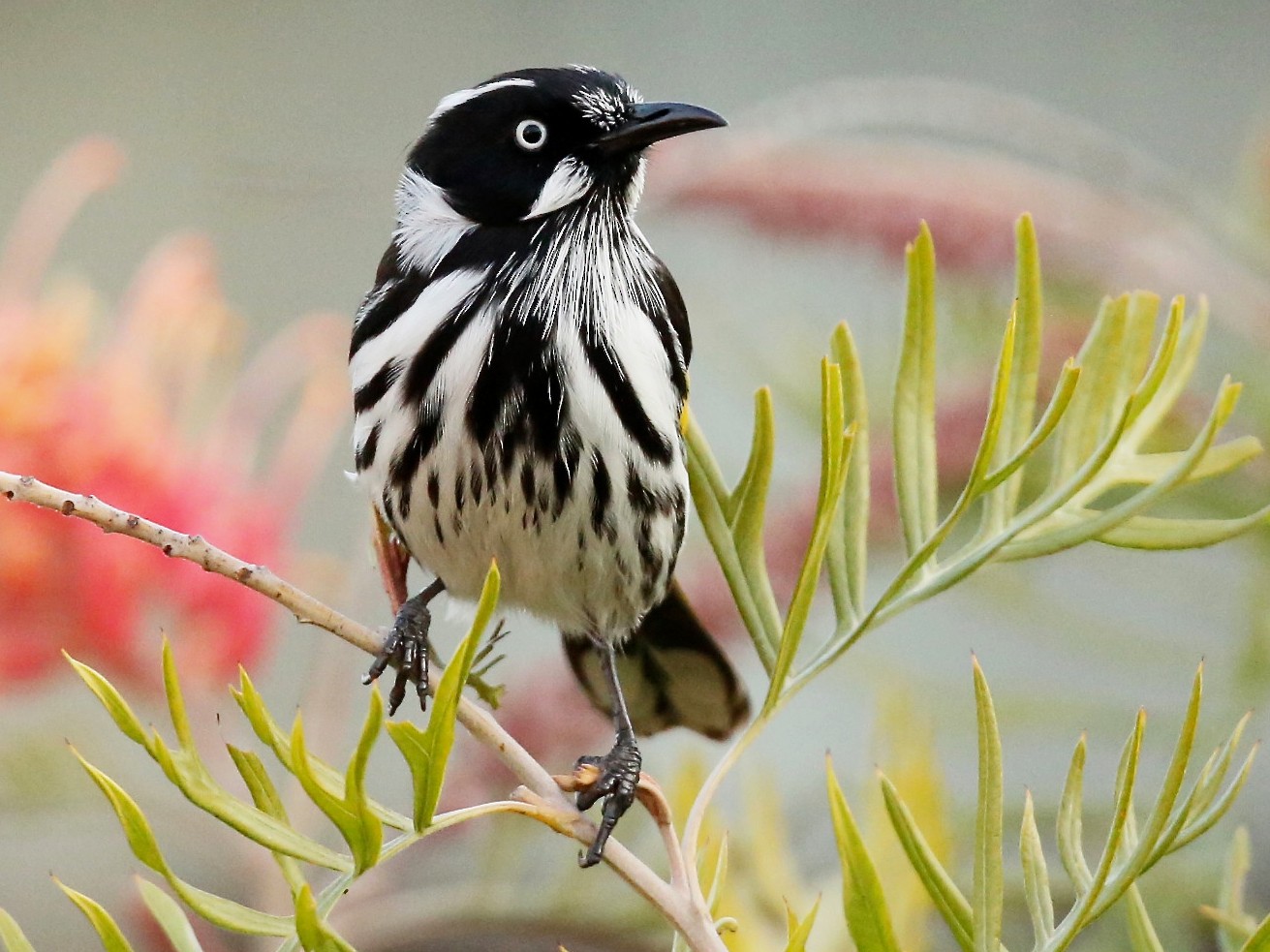 The new Holland honeyeater is a striking honeyeater that consists of white underparts with black streaks, with its back, wings, and head all black while its tail and wings are yellow. They can be found in a variety of habitats, such as forests, woodland, gardens, and coastal heath. Their diet consists primarily of nectar, with the occasional fruit, insects, and spiders.

As its diet is similar to that of the hummingbird, the new Holland honeyeater also comes with a long, narrow beak that allows it to reach the nectar. They’re also of a similar size to some of the larger hummingbird species.

The singing honeyeater is a medium-sized honeyeater that consists of an olive-brown back and gray underparts, with its size and plumage varying significantly across its range. They are one of the most common honeyeaters in Australia and can be found in habitats that consist of acacias, such as open shrublands and low woodlands. Their preferred diet consists of nectar, insects, and fruit.

Similar to the hummingbirds, the singing honeyeater has a long and narrow bill that allows it to reach the nectar in flowers. On average, they are also of a similar size to some of the larger species of hummingbirds. Finally, they spend much of their time alone, a trait shared by most hummingbirds.

Unlike the hummingbird, this species has a noticeably shorter bill (though still longer than insectivorous birds). They can also grow quite a bit larger (8.7 inches) than even the giant hummingbird (8 inches), so it shouldn’t be too difficult to differentiate them at first sight.

Range: South Africa with some occurring in West Africa

The malachite sunbird is rather a large sunbird that, for breeding males, is bright green with a long tail, while non-breeding and females have duller plumage and long bills. They can be found in habitats ranging from moorland to exotic tree plantations, usually at higher elevations.

Due to their diet primarily consisting of nectar, malachite sunbirds, like hummingbirds, have developed very long, narrow, and rather straight bills made to extract the food.

The malachite sunbird, especially the males, is quite a bit larger than even the giant hummingbird, so they can be differentiated from quite a distance away. They also perch when they’re extracting nectar, while hummingbirds typically hover in the air. There is a slight curve of the bill at the end, so you’ll be able to tell the difference with a closer look. 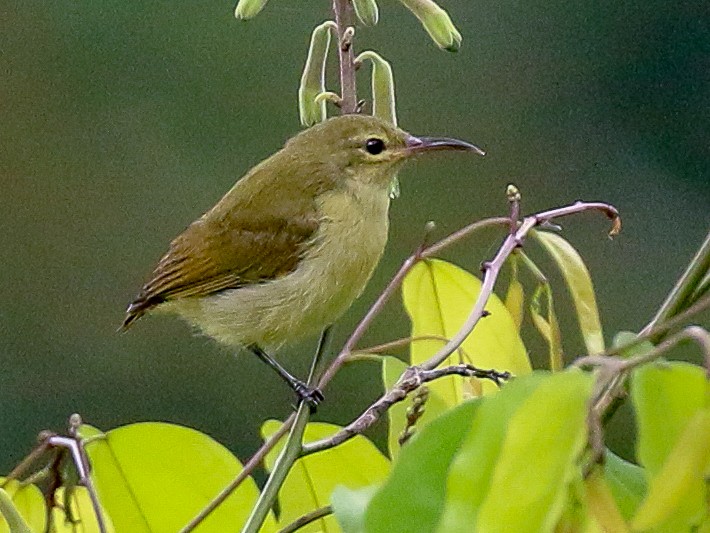 The little green sunbird is a warbler-like sunbird that has a partially pink, slightly curved bill and a pale eye-ring. Its habitat consists of canopies and the mid-stories of humid forests. Their diet consists primarily of nectar, with the occasional small fruits, fig seeds, and small insects.

Per its namesake, the little green sunbird is one of the smallest sunbirds and easily resembles a hummingbird at first sight. It also has the typical long and narrow beak of nectarivores. They’re also capable of hovering in the air, with the motion looking very similar to that of the hummingbird.

Typical of many of the previous birds we’ve discussed in this article, the little green sunbird has a bill that’s quite a bit shorter than that of the hummingbirds. It also tends to gather in pairs or small groups, something that is rarely seen among hummingbirds. 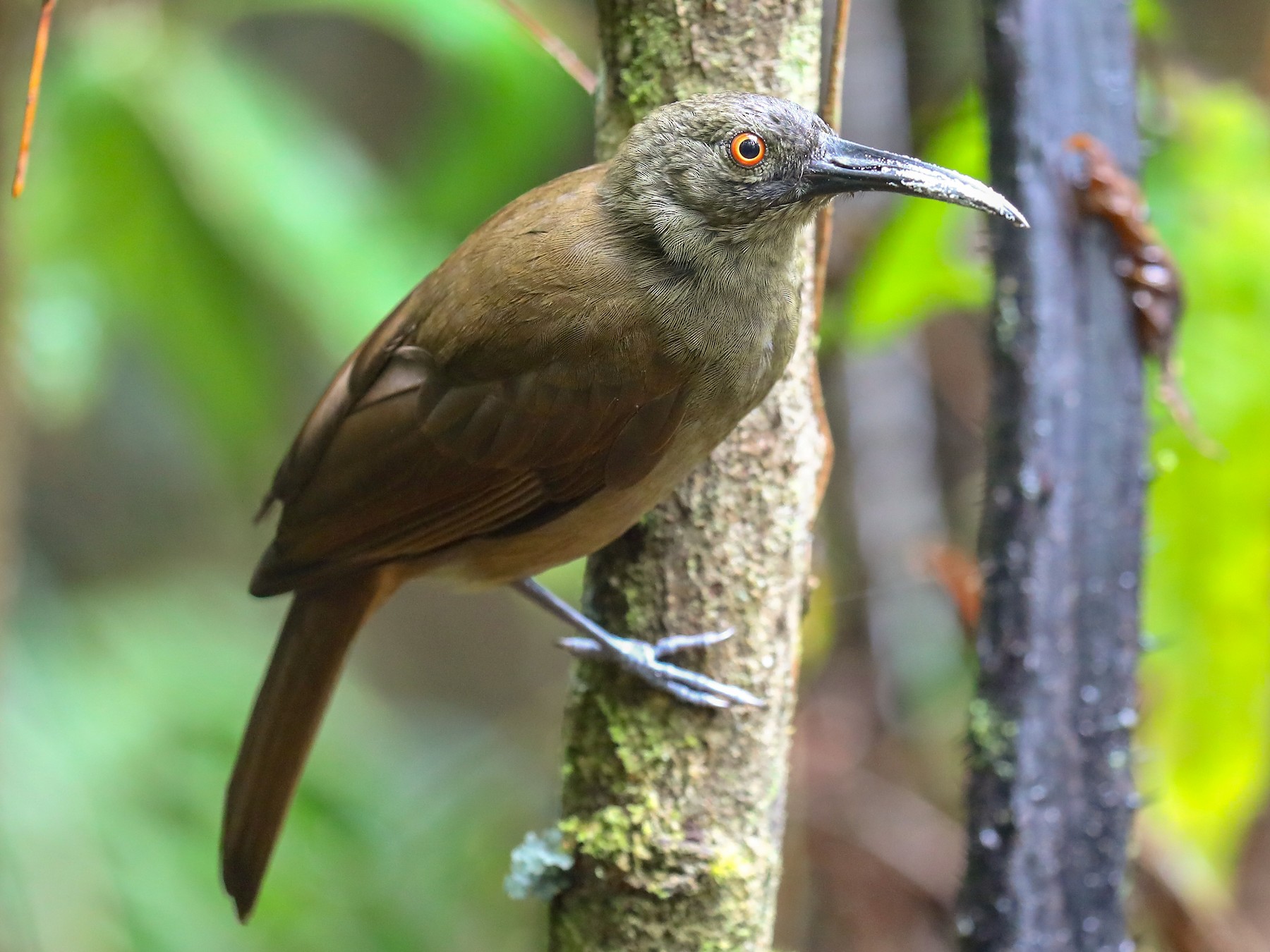 The long-billed honeyeater is a medium-sized honeyeater that has a noticeably long bill, brown upperparts, gray underparts, and a head with bright, red eyes. They inhabit forest habitats from the lowlands to the mountains. They prey primarily on small arthropods, lizards, nectar, and the occasional fruit.

The long-billed honeyeater has one of the longest bills proportional to its body of all the honeyeaters. Therefore, at first glance, they have a heavy resemblance to the bills of hummingbirds. Their dull body color also adds to the illusion of them being hummingbirds as it can be difficult to identify them at first, as compared to other honeyeaters or sunbirds, which have iridescent plumages. 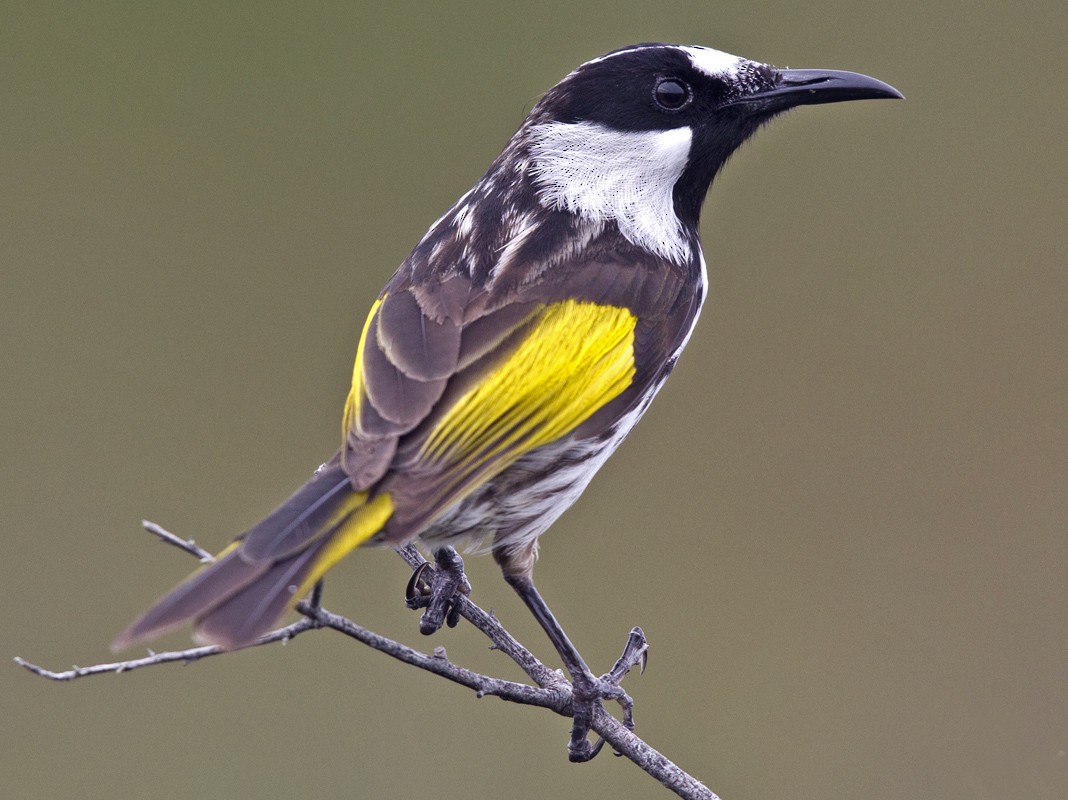 The white-cheeked honeyeater is a distinctive honeyeater with large white patches on its cheeks, white underparts with black streaks, and habitat consists of heath, so they can commonly be found in areas such as moist heathlands, forests, or woodlands. They feed primarily on nectar and insects.

Similar to the hummingbirds, the white-cheeked honeyeater has a long bill used to reach next to the nectar within the flower. They are also of a similar size to some of the larger hummingbird species. They sometimes feed in small groups, a trait shared by many hummingbird species.

As common with many of the birds discussed earlier, the white-cheeked honeyeater has a somewhat shorter and more curved bill than that of the hummingbird. The bill is also thicker at the base. 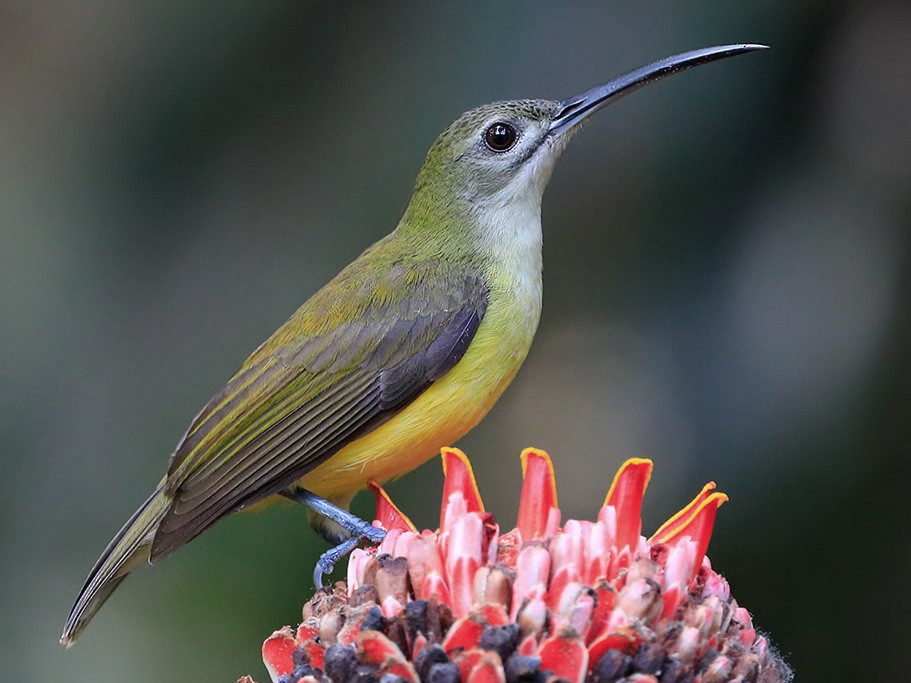 The little spiderhunter is a small sunbird that has a very long, curved bill, as well as an olive plumaged back, lemon-yellow underparts, and a pale gray and white face. Their habitats consist of forest edges, plantations, and gardens. Despite their name, little spiderhunters also feed on other insects and nectar.

At first glance, it can be difficult to tell this sunbird apart from a hummingbird due to both its small size and its extremely long and slender bill. This species is also one of the few that hovers when they’re feeding on nectar, a trait common in all hummingbird species.

A closer look at its bill will show you that it has a slight curve to it, something not seen in hummingbirds.

From this article, you can see that there are many bird species out there that highly resemble hummingbirds. What’s amazing is that these birds aren’t genetically related to hummingbirds; these similarities are all due to them sharing a similar niche. Next time you see a bird that you think might be a hummingbird, be sure to take your binoculars to get a closer look.

10 Plants That Attract Hummingbirds To Your Yard

Do Hummingbirds Migrate? (Everything You Need To Know)