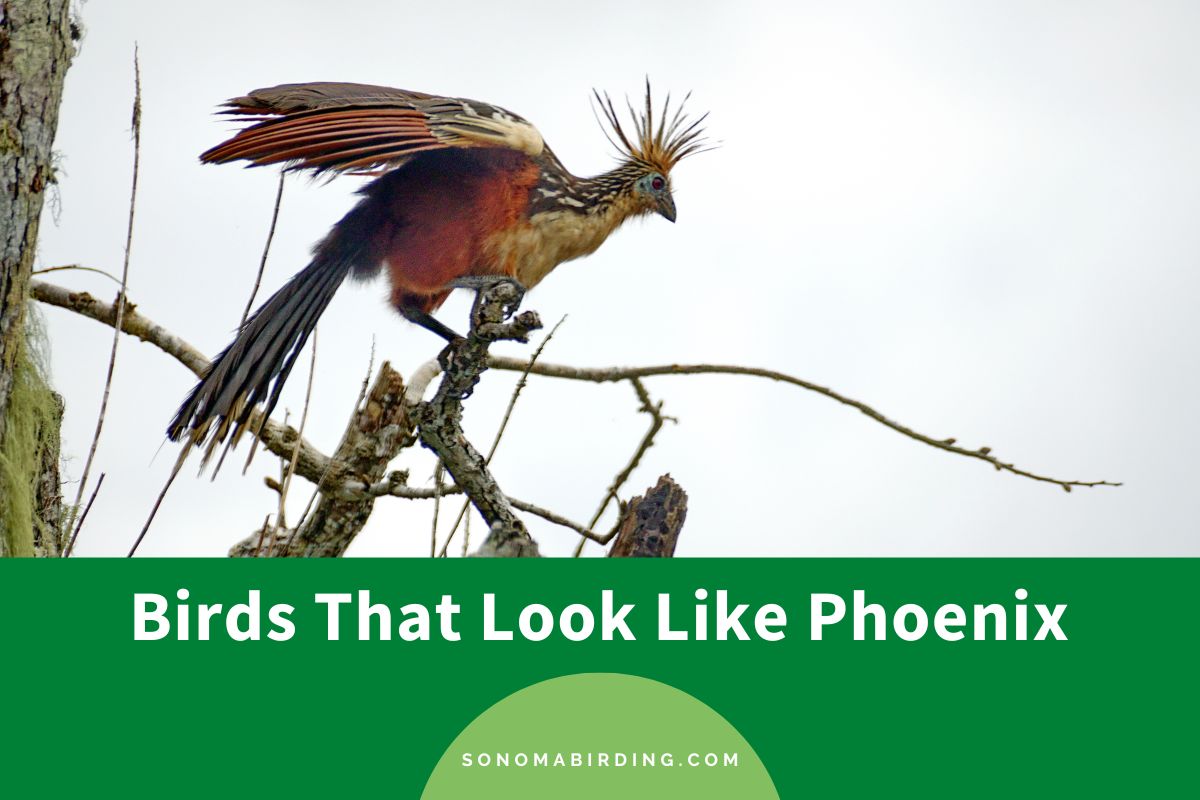 The Phoenix, with its bright golden plumage that reflects sunlight and its ability to be reborn from the ashes of its predecessor, is one of the most well-known mythical creatures. Though no real-life bird is immortal and can regenerate like the Phoenix, some do share very similar physical traits to the legendary creature.

In this article, we’ll be going over 12 bird species that, through different evolutionary paths, have resulted in appearances that can be mistaken to be those of the phoenix. 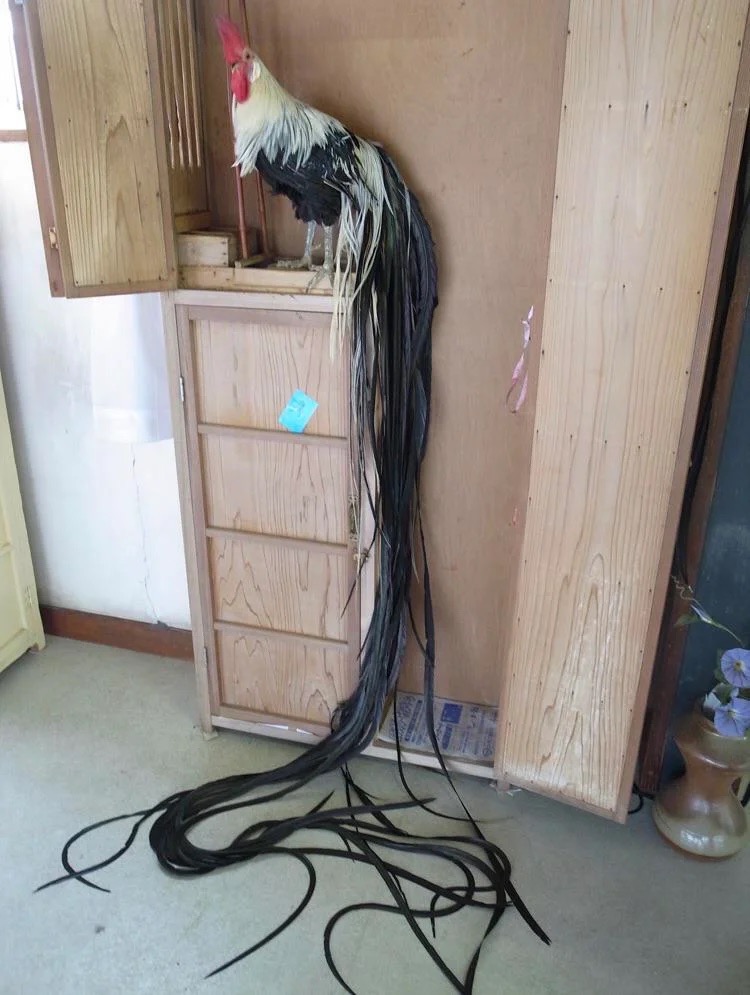 The Onagadori is a special breed of chicken that consists of a single comb, reddish-brown eyes, white ear lobes, and a characteristically long tail, which can grow to a maximum length of 12 meters.

The Onagadori is found only in Japan, where it is specifically bred for ornamental reasons. They require a high protein diet due to their extremely long tail growth; thus, they mainly feed on chicken rations, as well as supplements such as meat scraps and legumes. 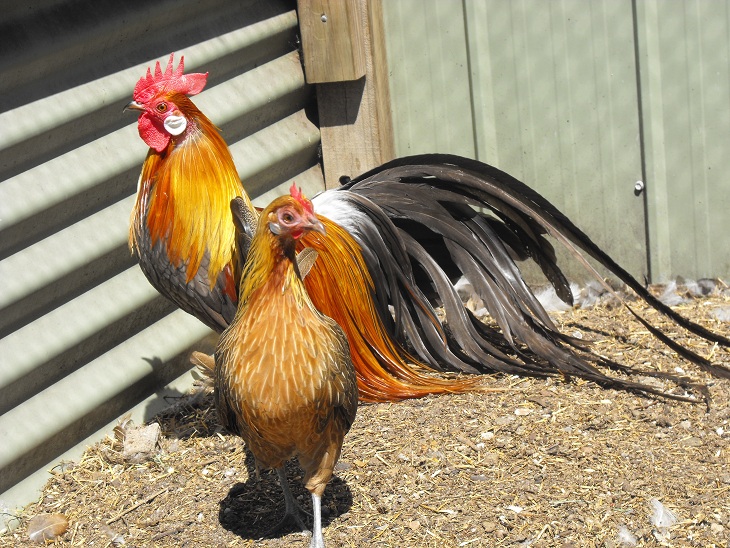 The phoenix we’re looking at here, though sharing the same name as the mythical bird, is another domestic chicken breed that consists of one bright red comb with five upright points, red wattles, white earlobes, and reddish-brown eyes.

Similar to the Onagadori, from which this bird is descended, the phoenix also has a particularly long tail (though not as long as the Onagadori due to lacking a certain recessive gene). All in all, its bright red plumage and long tail make it highly resemble the mythical phoenix.

The phoenix is a special breed of domestic chicken that is endemic to Germany, the result of cross-breeding between the Onagadori and several other chicken breeds.

The phoenix feeds on different diets that consist of different protein levels. The majority of diets include grain byproducts, alfalfa, soybean, wheat, corn, and barley. 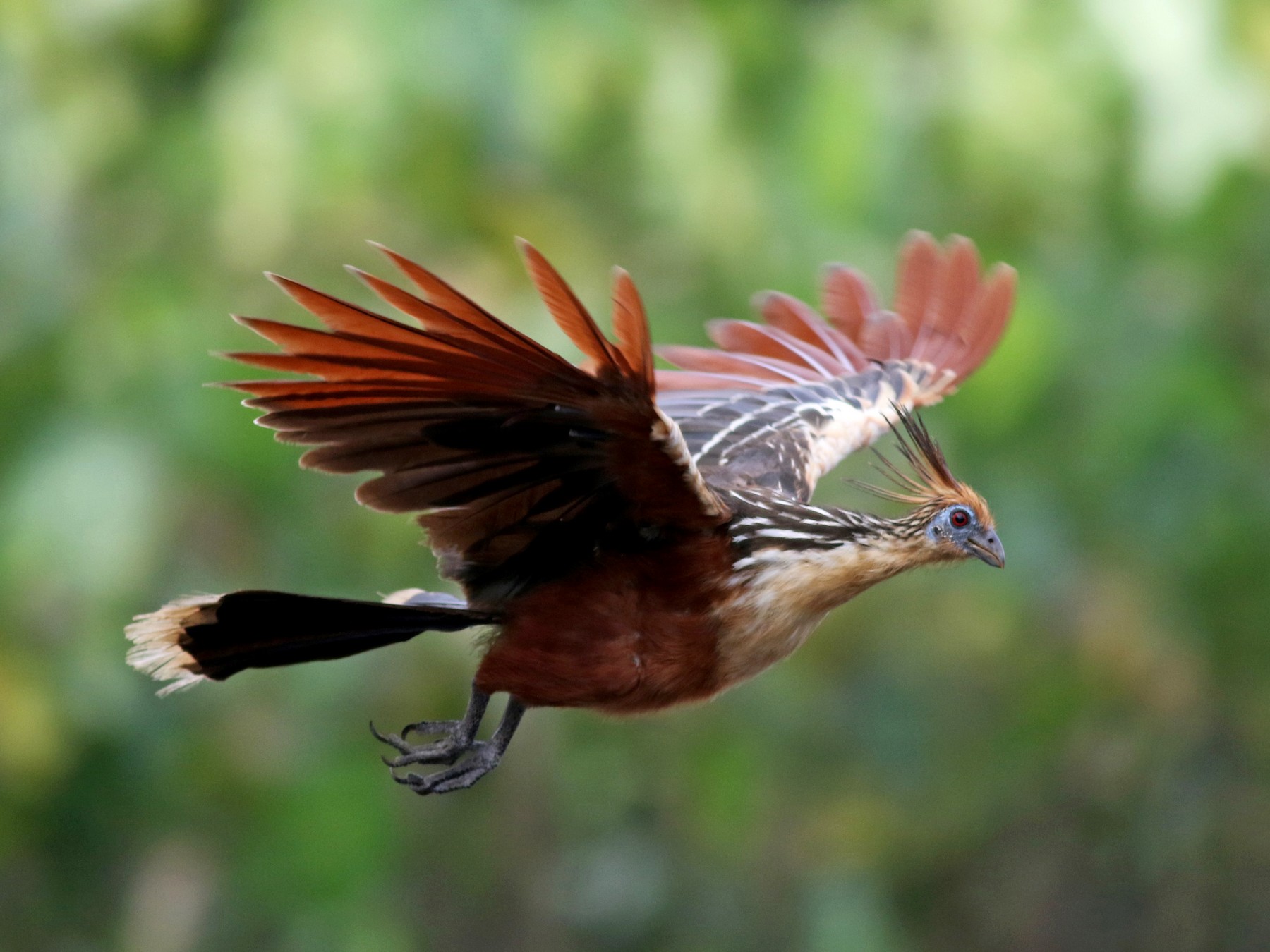 The Hoatzin is a large bird that has a small head (in comparison to its body), an orange mohawk, blue facial skin, and a short bill. Its orange hackle feathers, orange mohawk, and rather long tail all make this bird stand out from a distance and can fool many into thinking it’s the mythical phoenix.

The hoatzin prefers habitats around freshwater sources, such as near lake edges and slow-moving streams, where it can be found moving around waterside vegetation either in groups or pairs.

This species eats only swamp plants (including its leaves, roots, and flowers), in which their crops can ferment before entering their stomach. 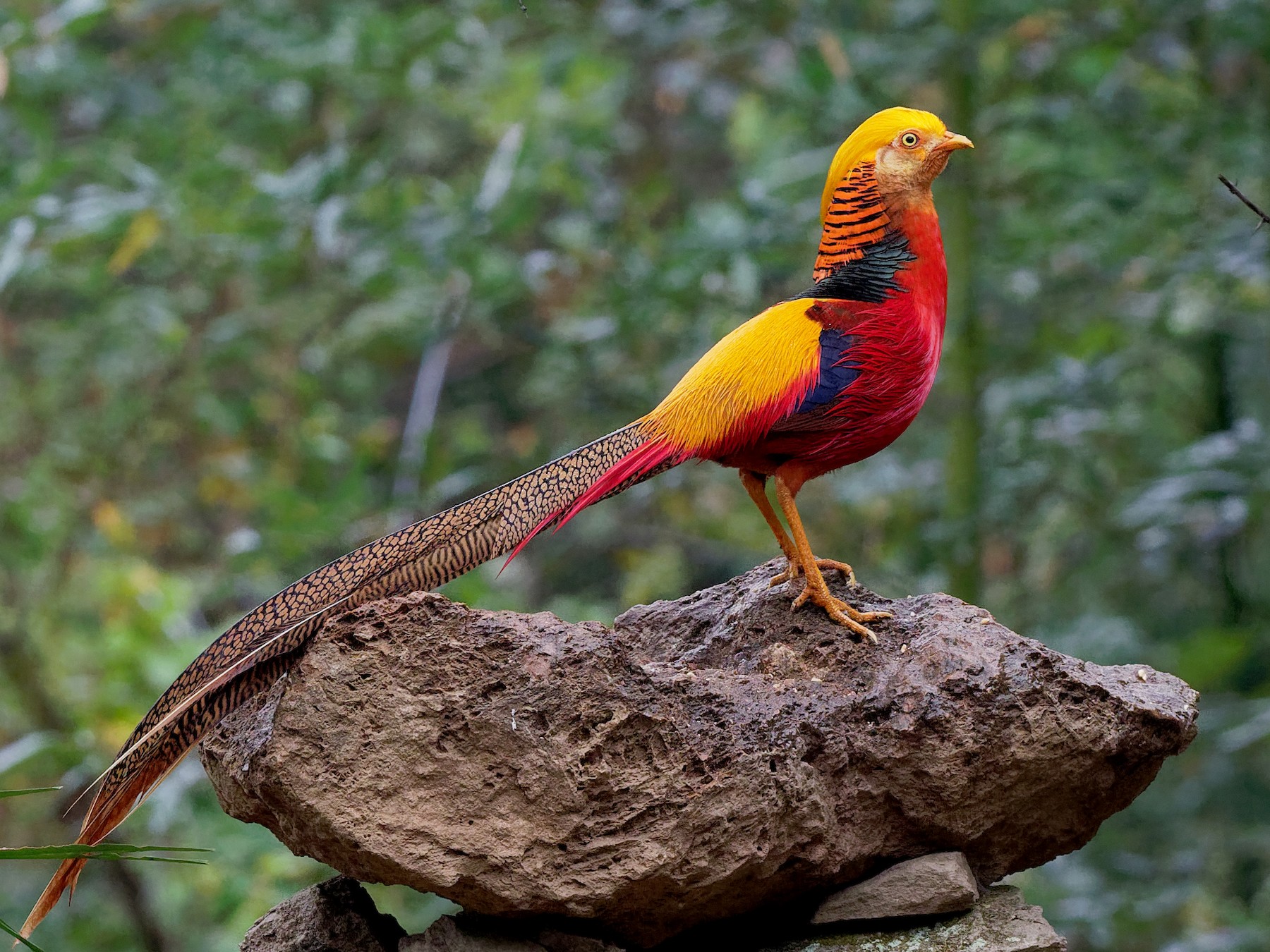 Though much smaller in size, the bright orange neck feathers and the long tail of the males can make them resemble the colors of the phoenix.

The golden pheasant can be found in mixed and conifer woodlands, where they will run away under even the slightest disturbance. The golden pheasant diet consists of a variety of seeds, grain, berries, invertebrates, and other vegetation. 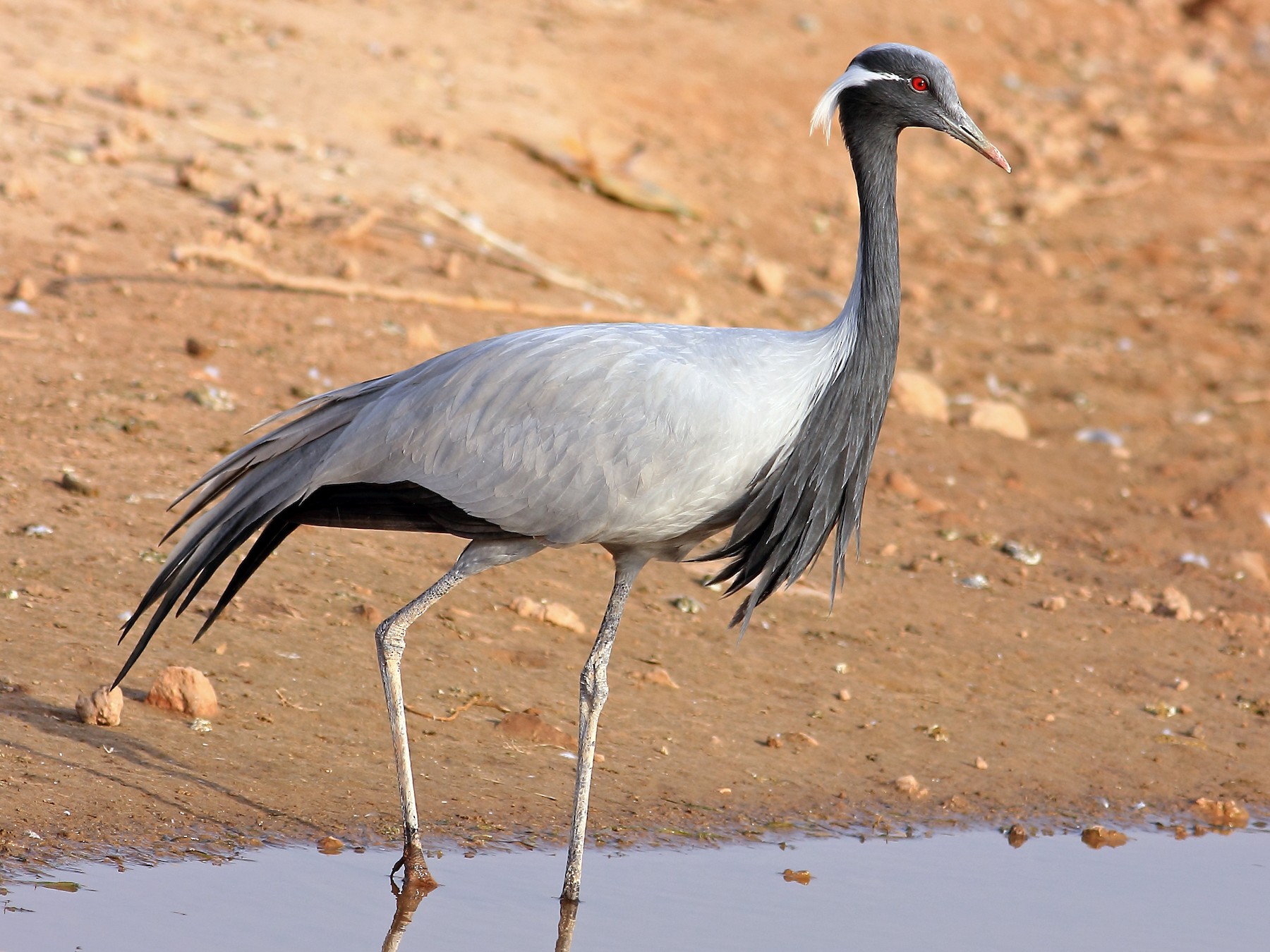 The Demoiselle crane is a small gray crane that has a smooth gray plumage, a black neck, red eyes, and white plumes extending behind the eyes. They have dark wingtips that can be seen in flight.

Though not consisting of the bright red and orange feathers we’re used to seeing in phoenixes, the Demoiselle crane has large wings that, when opened, bare a significant resemblance to the wing shape of the phoenix.

Its habitats include fields, deserts, steppes, and any plains that contain water. As omnivores, demoiselle cranes consume a variety of foods ranging from cereal grains to lizards, worms, and small vertebrates. 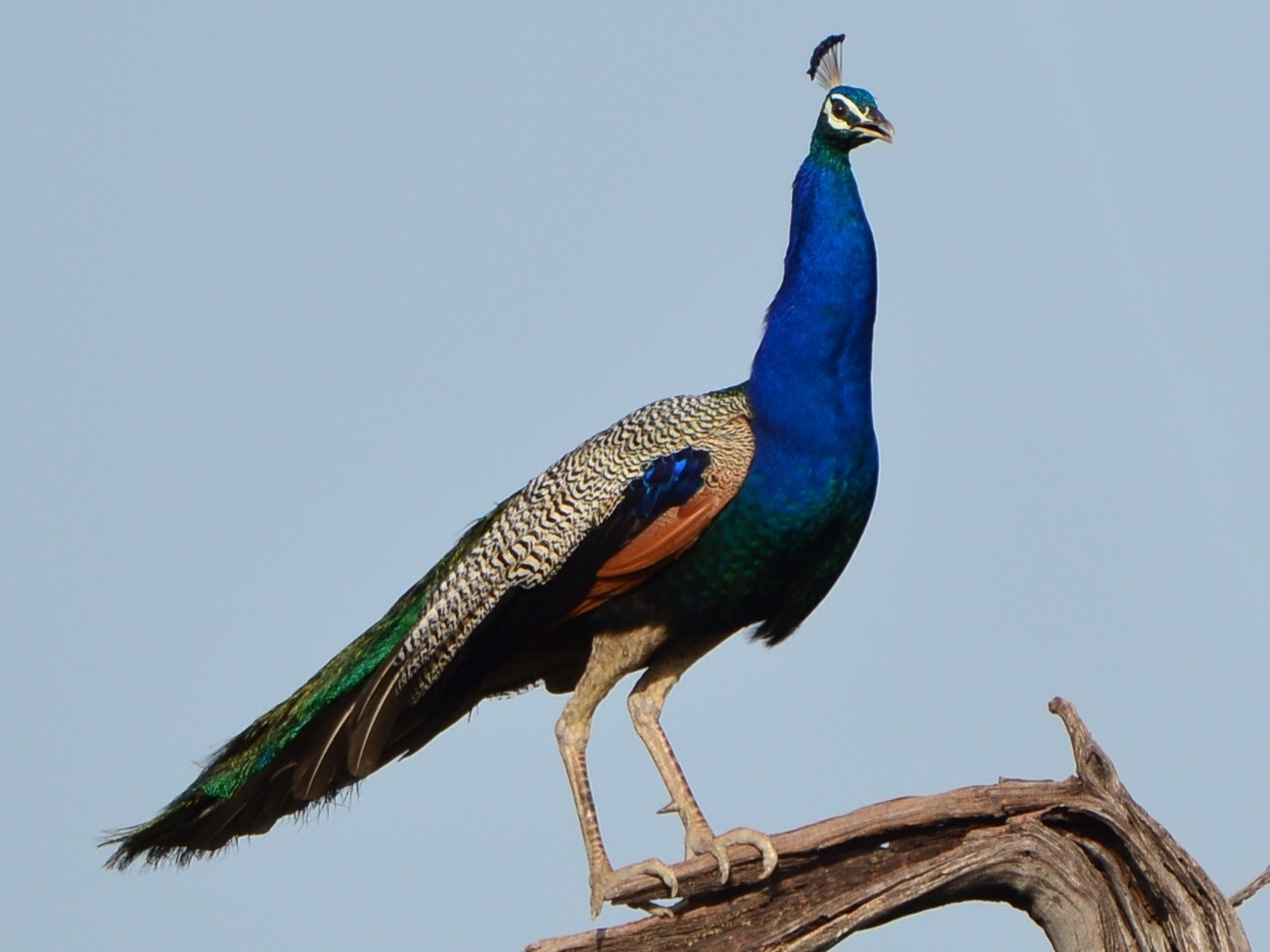 The Indian peafowl is a large ground bird that is arguably one of the most recognized birds in the world. The males have an iridescent blue plumage and spread their ornamental upper tail feathers to attract females.

The females are a shorter tail, green neck, and overall brown plumage. Though the Indian peafowl doesn’t have the characteristically red and orange plumage we imagine on phoenixes; they do have a very long tail and large wings that are reminiscent of the mystical creature.

Their typical habitats include forests, forest edges, and agricultural land. As omnivorous birds, Indian peafowls have a diet consisting of seeds, insects, fruits, small mammals, and reptiles. They can often be seen feeding in the undergrowth and, depending on the immediate environment, can have a diet comprised mostly of one type of food. 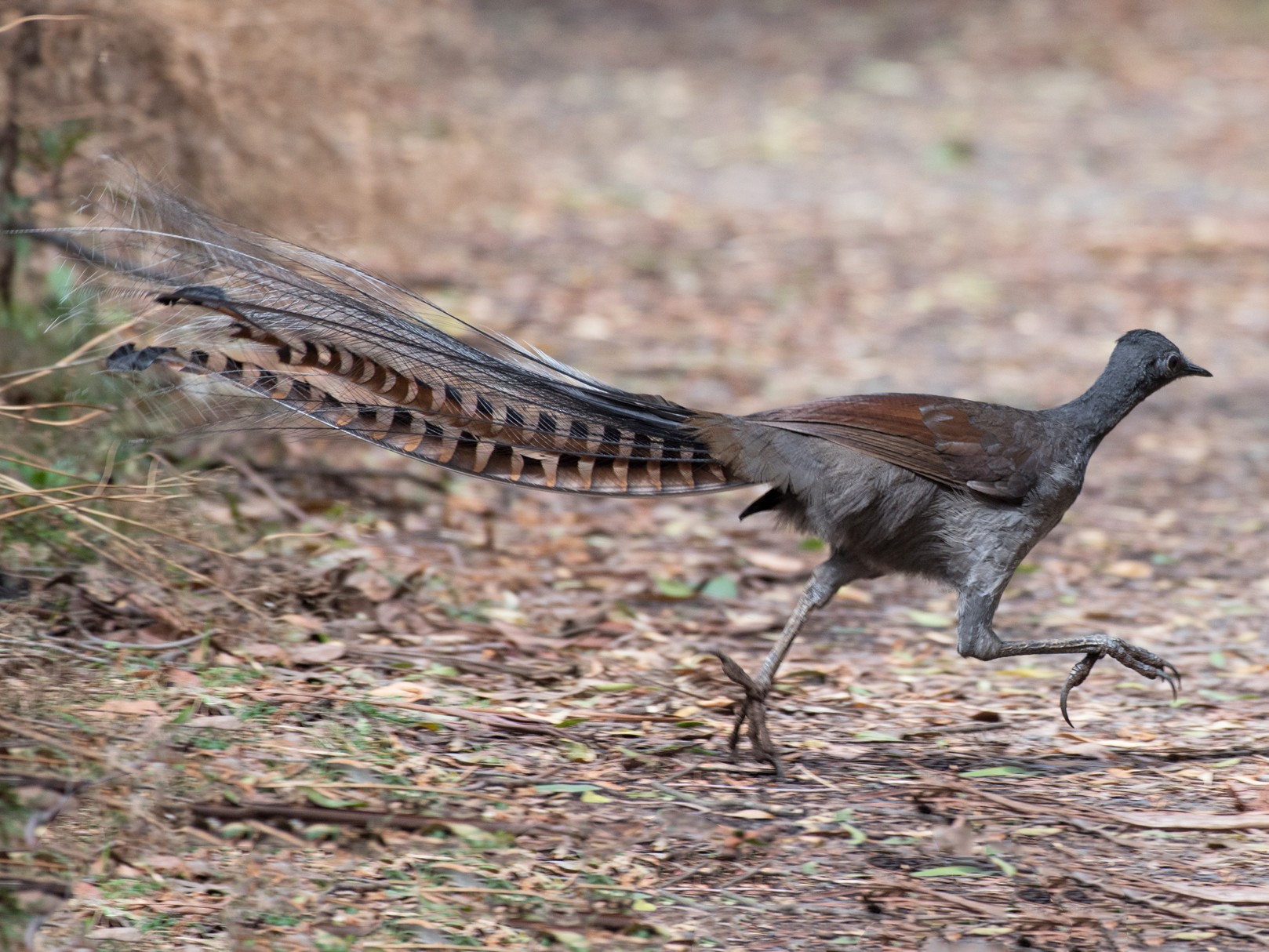 The Superb lyrebird is a large ground-dwelling bird that consists of a long tail, gray-brown plumage, reddish outer wings, and strong legs.

Males have a very long tail composed of various feather types, including the main “lyre” feathers that are barring and other plainer and thinner feathers. Females lack these long tail feathers. The reddish outer wing and the rather long tail feathers of the male can mimic the color and tail of the phoenix.

Their typical habitat includes the rainforests in Southeastern Australia. The superb lyrebird forages in the leaf litter for a variety of foods such as seeds, insects, spiders, worms, frogs, and other small invertebrates. 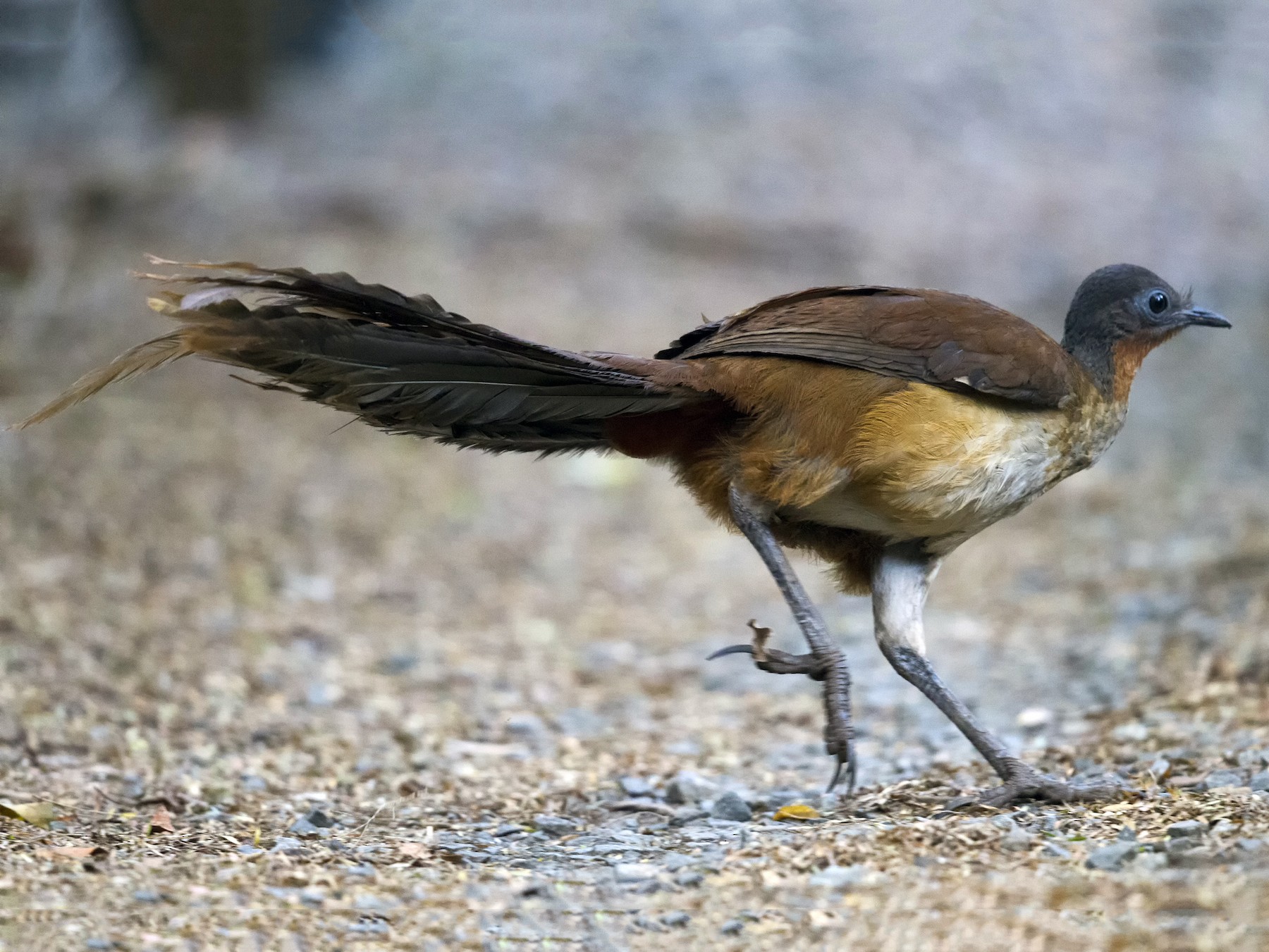 The Albert’s lyrebird is a large bird that consists of brown plumage, a very long tail, and curved outer tail feathers that can make the males resemble a lyre. These tail feathers are absent in juveniles and females.

The Albert’s lyrebird is mainly found in rainforests or wet sclerophyll forests, where there are wet understories of rainforest plants. It is restricted to a small region of Queensland and the far northeast of New South Wales.

The Albert’s lyrebird has a diet consisting of mainly insects, larvae, and other invertebrates commonly found in the soil. 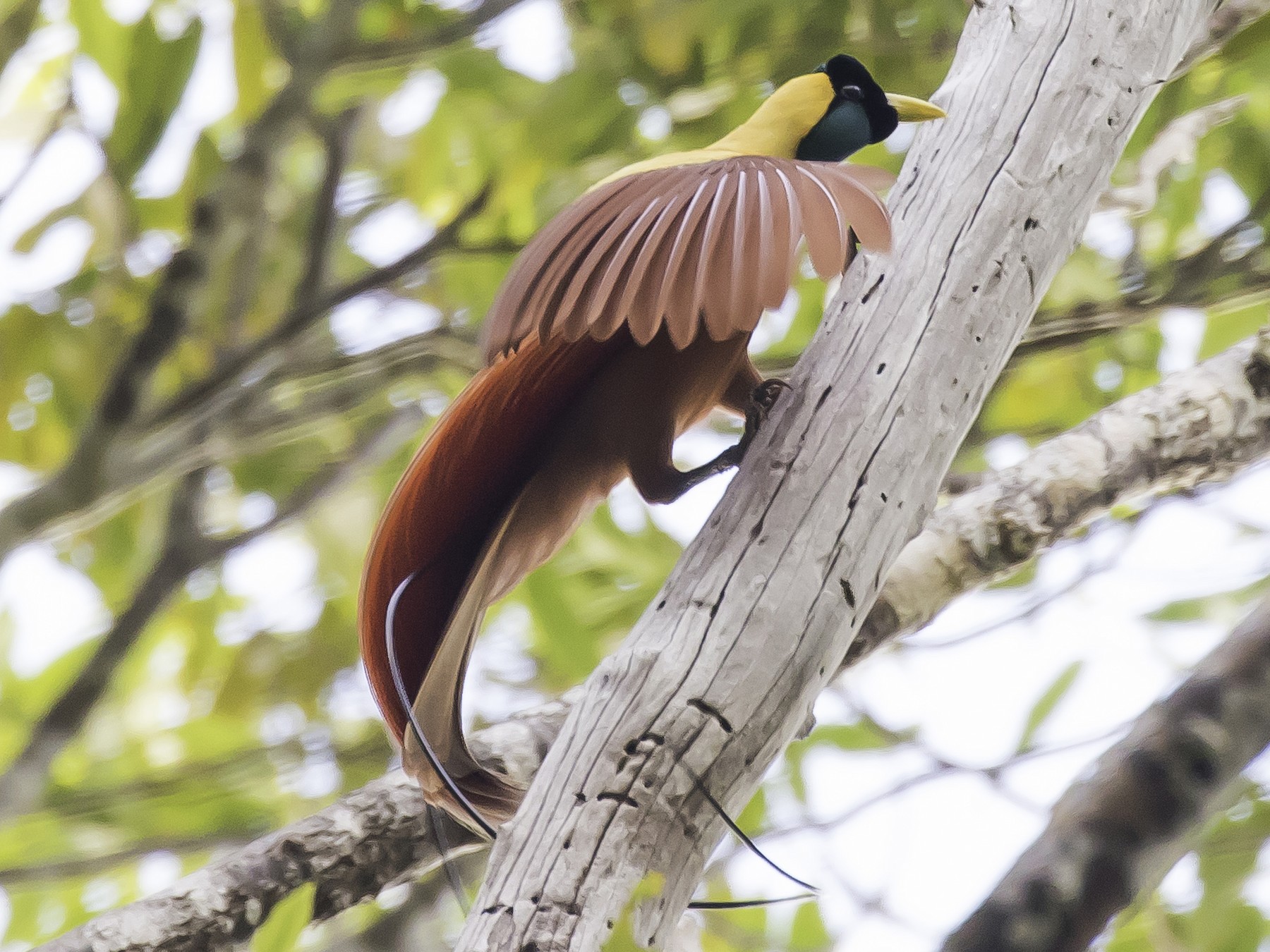 The Red bird-of-paradise is a large bird that consists of a yellow bill, chest, and back of the head. The face is green in males and black in females. The males, in particular, have 2 black streamers attached to the tail and chestnut-colored wings and plumes that they spread when courting females.

The combination of the long tail, long wings, and deep red coloration gives the male red bird-of-paradise a close resemblance to the phoenix.

The Red bird-of-paradise lives strictly in lowland rainforests on the northwest islands in West Papua, a habitat shared by its relative Wilson’s bird-of-paradise. The diet of this species consists mainly of fruits, berries, and arthropods. 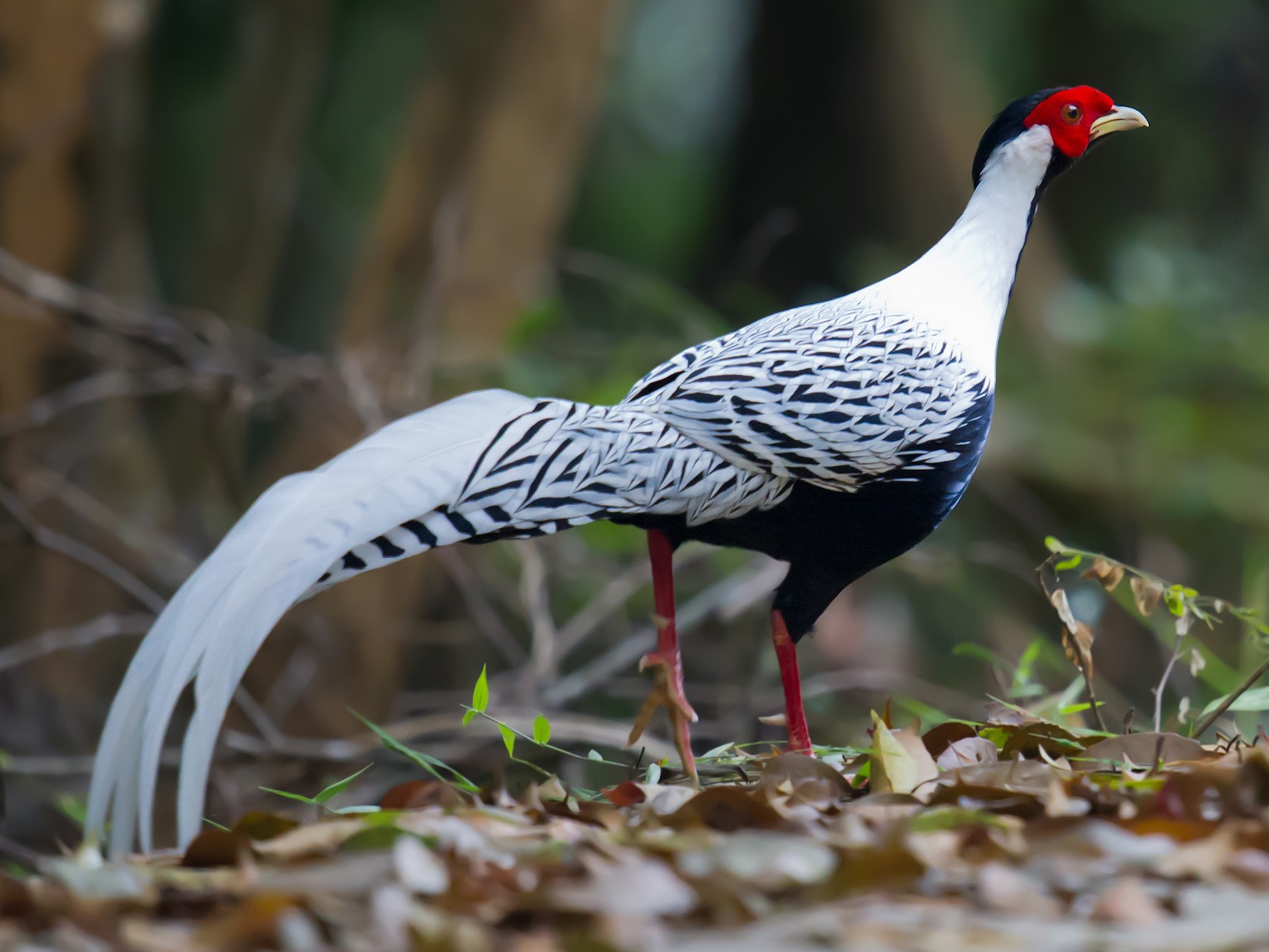 The Silver pheasant is a large pheasant that, for males, consists of either white or silvery-gray upper parts with a black crest, breast, underside, and a very long tail. Females are brown plumaged with a much shorter tail.

Bright red faces and legs are common to both sexes. Though not the red or orange bird we’d typically associate with a phoenix, the male silver pheasant certainly has the body shape with its extremely long tail and wide wings that are visible during flight.

The silver pheasant can be found in a variety of forest habitats, but they typically prefer forest edges and open areas to the denser parts of the forest.

Silver pheasants are herbivores that mainly feed on seeds, fruits, and, very rarely, invertebrates, depending on the season. 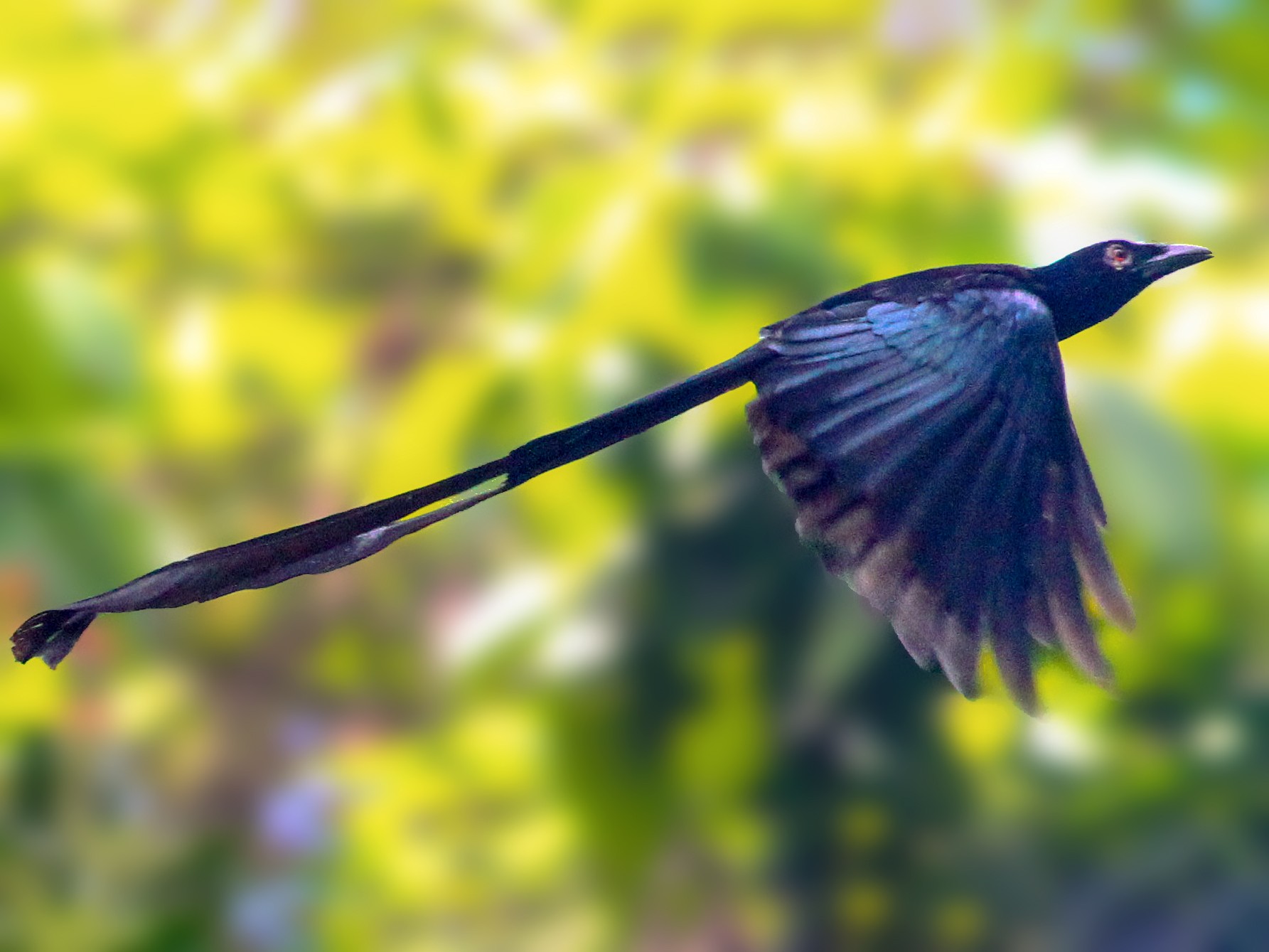 The Ribbon-tailed drongo prefers habitats such as lowland forests, hill forests, and stunted mossy montane forests up to an elevation of 1800 meters.

The ribbon-tailed drongo feeds almost exclusively on small invertebrates, in which they’ll forage in the middle of a canopy, but also at higher elevations. 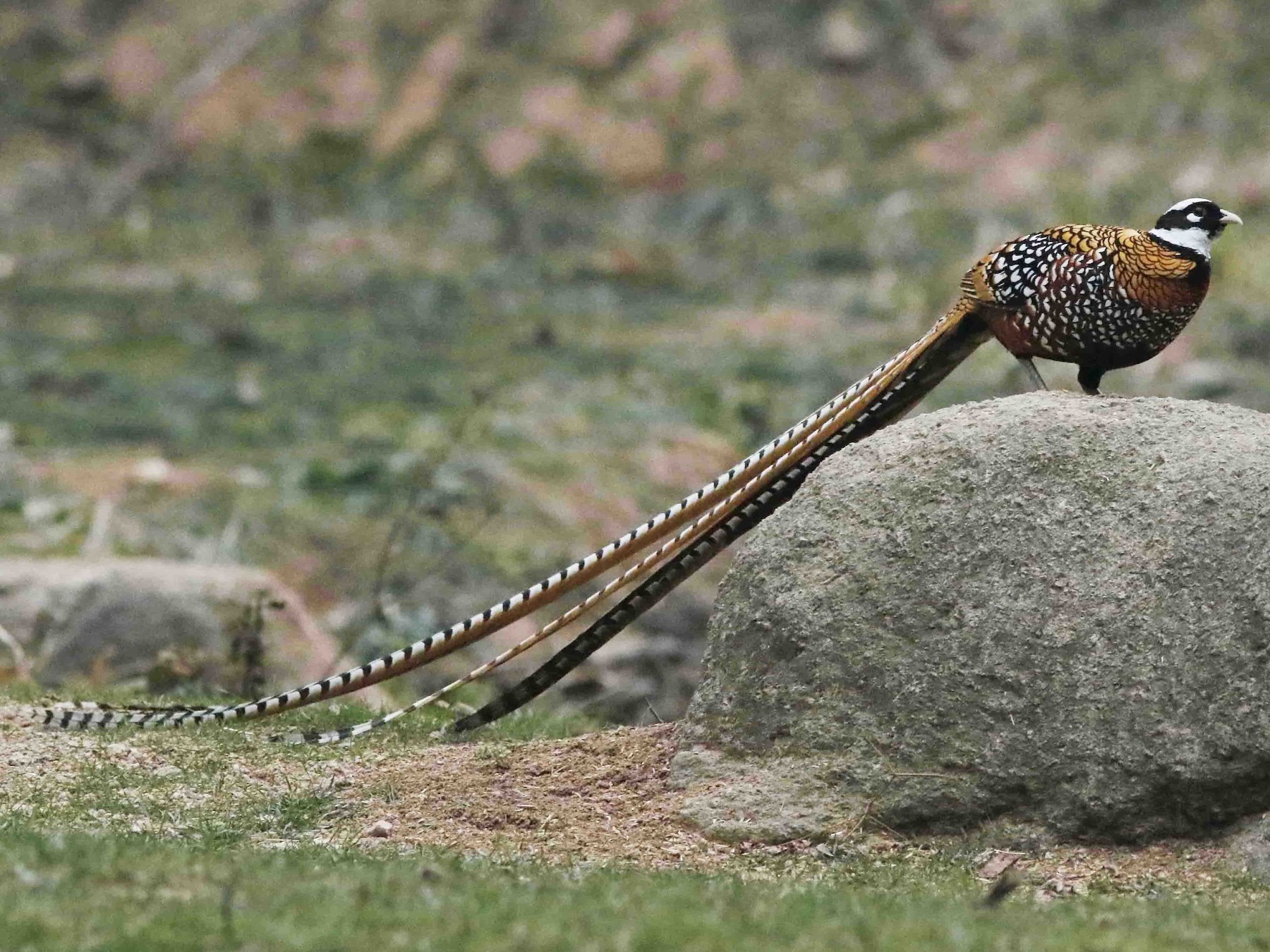 The Reeve’s pheasant is a large terrestrial bird that, for males, consists of a very long black-and-white tail, black, gold, and porcelain white plumed feathers, and for females, a peach colored underside and a dark stripe behind the eyes. The males, in particular, look like phoenixes with their beautiful colored plumage and strikingly long tail.

The Reeve’s pheasant’s typical habitat includes hill forests, evergreen forests, and farmlands within proximity to the woods. As omnivores, the reeve’s pheasant feeds on things such as seeds, flower buds, earthworms, and grubs.

From what we see in this article, it’s clear that, even though the regeneration through flames ability is unique to phoenixes, their appearances certainly aren’t. There are a surprisingly high number of birds that share similar appearances to the mythical bird; you just have to know where to look.

16 Birds With Beautiful Crowns (With Pictures)