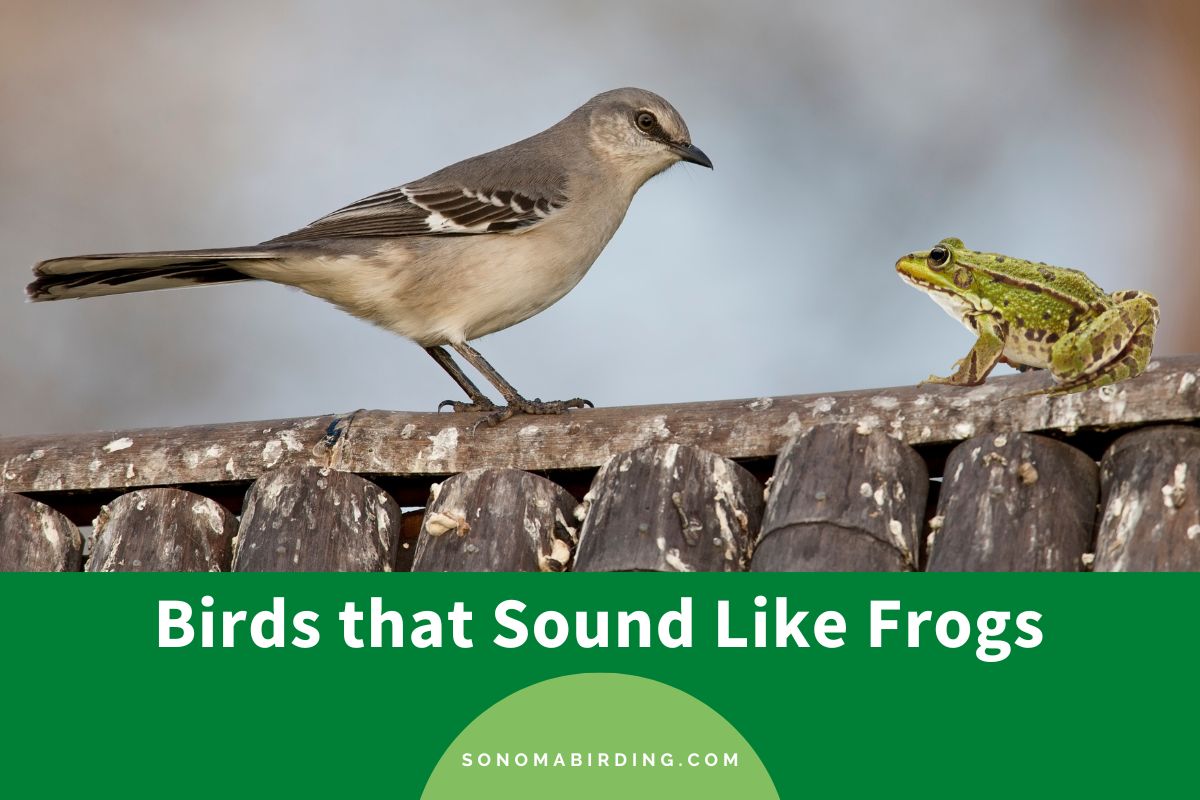 You may have always thought that frogs make a very distinct croak that allows you to easily identify them. However, did you know that there are birds that can imitate the voices of frogs? Not only do they exist, but there are also actually several species that share this trait. In this article, we’ll be going over 12 birds that sound just like frogs due to convergent evolution. 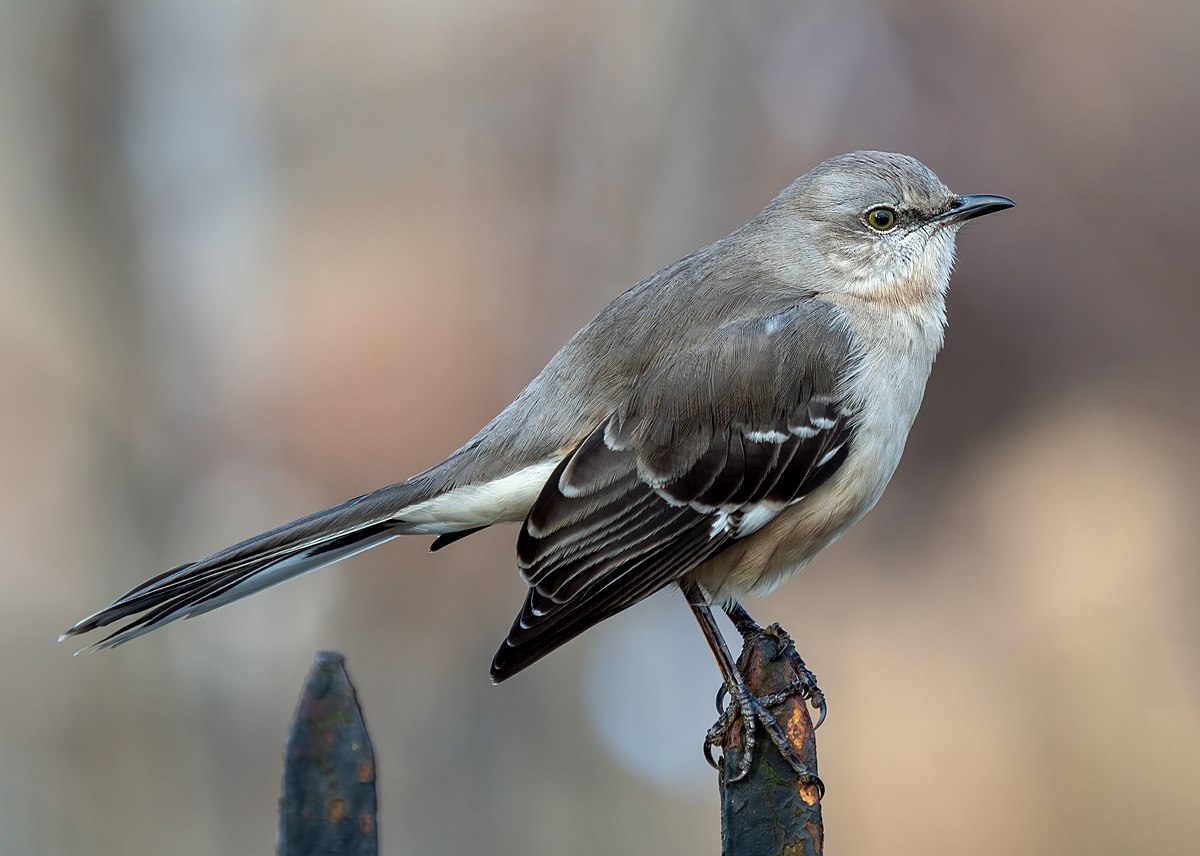 The northern mockingbird is a mockingbird that consists of a shorter than average beak, gray and white underparts, and a long tail. It’s easier to notice them during the flight due to the white patches on their black wings and tail, which are visible in flight.

Their habitat consists of neighborhoods, desert scrubs, old pastures, and anywhere else that contains bushes and trees. They feed on insects and fruit during the warmer and colder seasons, respectively.

The northern mockingbird can mimic many types of sounds, one of them being the calls from several species of frogs and toads. This is especially true when the vocal frequency of the calls matches the vocal range of the mockingbird, after which it’s almost impossible to distinguish the birds other than the fact that their calls tend to be a bit shorter in length. 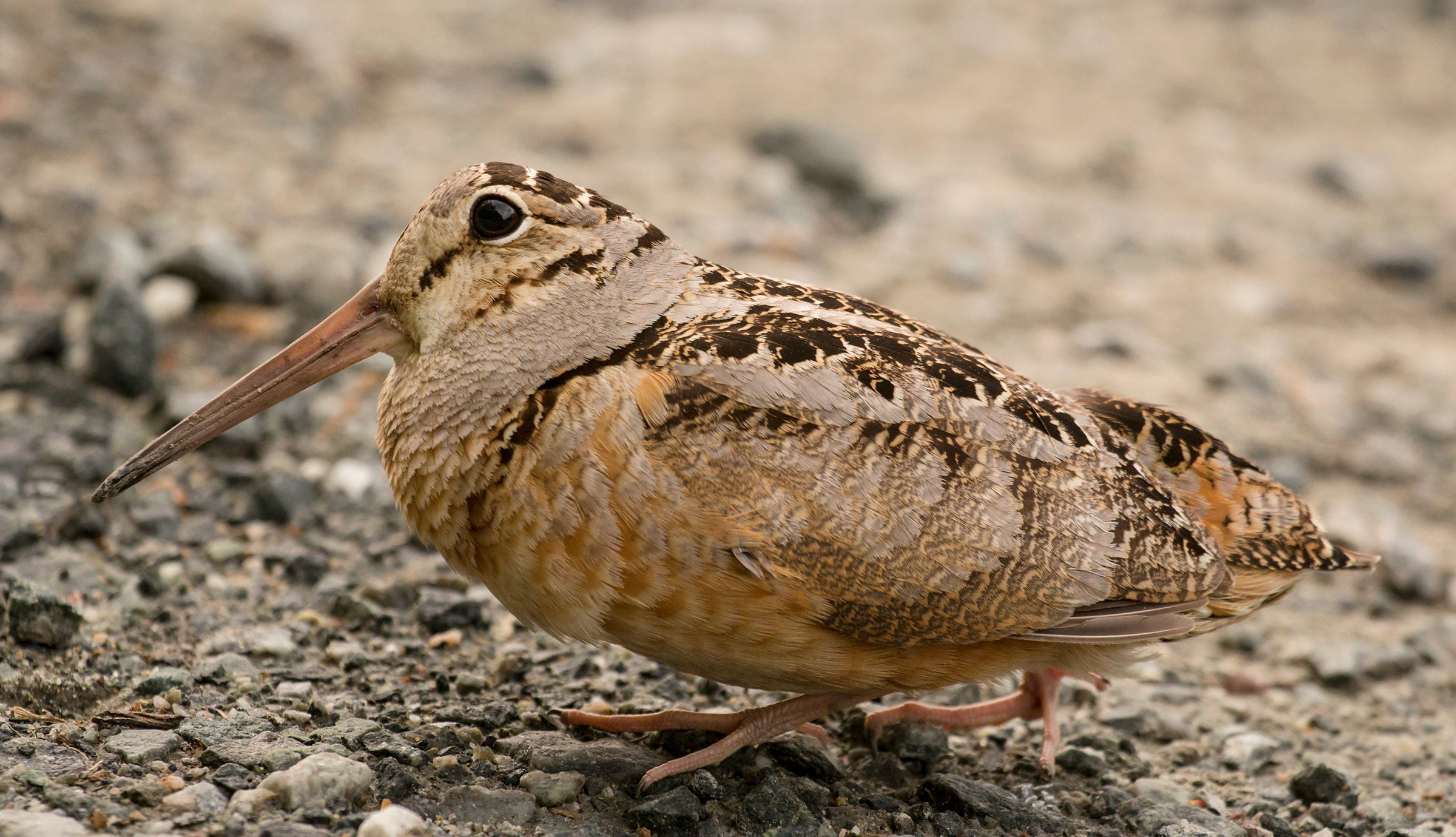 The American woodcock is a small, plump shorebird that has a plain, buffy-salmon belly with patterned upper parts with gray stripes down the back.

Their eyes are large and placed high and far back on the head. Their habitats consist of wooded and shrubby areas, typically near open fields. Their diet consists primarily of earthworms and insects, along with some invertebrates.

The American woodcock’s call consists of a loud nasal “peent” when they’re on the ground, which sounds very similar to a frog’s peep. The similarity is so obvious that, unless you listen very closely, you’re unlikely to notice the subtle hiccup that precedes the “peent,” which is the only difference that separates the bird from the frog.

The hooded merganser is a small duck that consists of a crested head (black with a white spot for males and brown for females) which can be spread opened or closed.

They prefer habitats ranging from wooded lakes to ponds to rivers (rivers and creeks are more common in the summer, and ponds and swamps in the winter). Their diet primarily consists of small fish, crayfish, and other small crustaceans.

Though typically silent, the hooded mergansers make a unique sound during mating rituals and around their nesting grounds. The sound is a deep, rolling call that is very similar to the call of a Pickerel frog, so much so that these ducks are nicknamed the “frog-ducks” in Georgia. 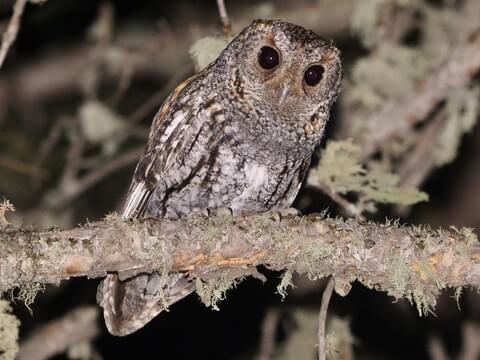 The flammulated owl is a very small species of screech owl that can appear in a red and gray plumage, with a key distinguishing feature being the streaks of reddish feathers along their shoulder and back.

Another unique feature is its dark eye (other screech owls have yellow eyes). They prefer to stay in mountainous pine forests where large pines or fir trees are common so that they can forage for insects near the treetops at night.

The low-pitched hoot of the flammulated owl, followed by a lower two-hoot trill, highly resembles the calls of a bullfrog. This call becomes higher pitched (like a trumpet) when they’re alarmed. 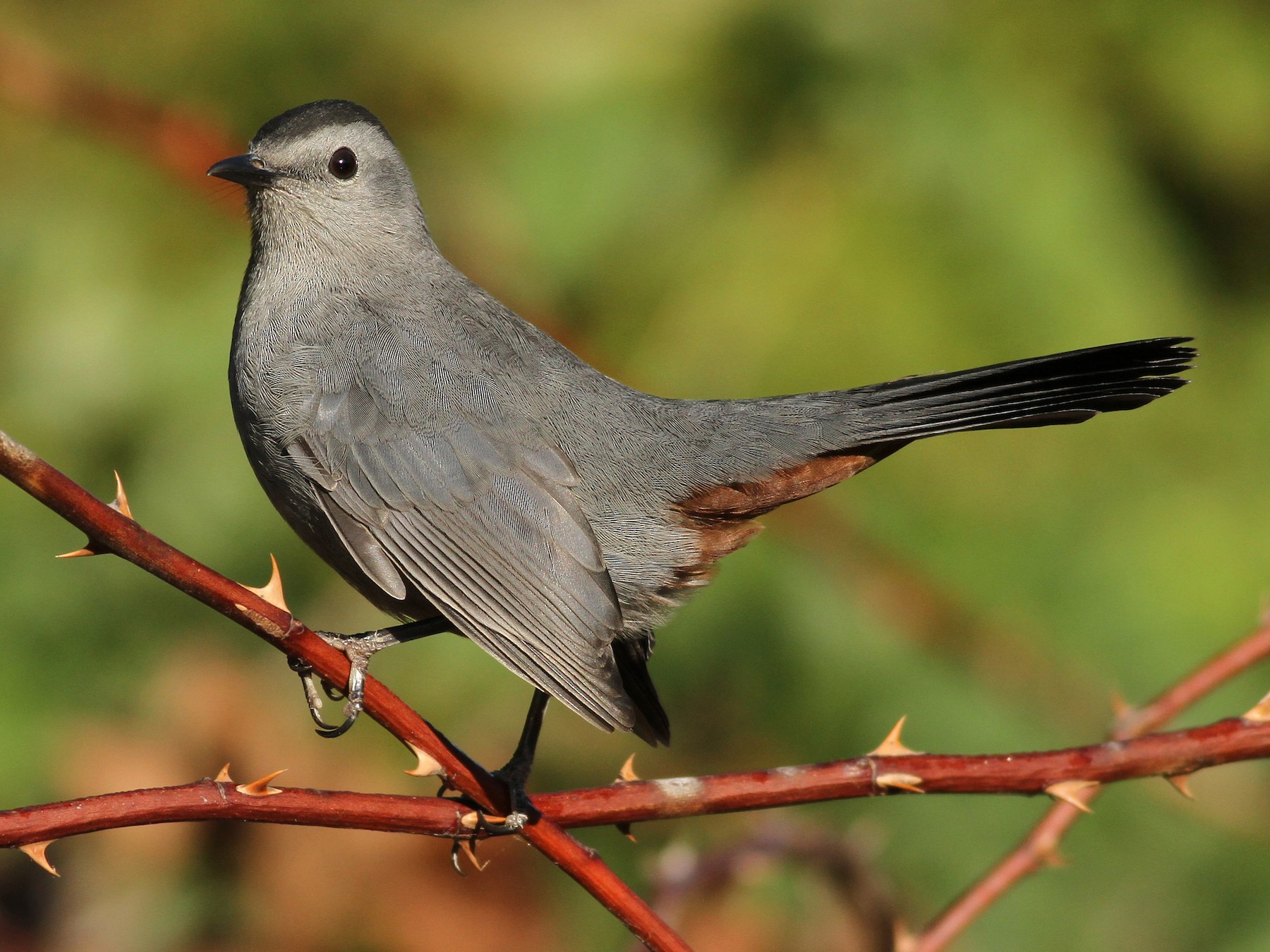 The gray catbird is a medium-sized songbird that consists of a smooth gray body, a black cap, and a rusty-red undertail. Its habitat consists of dense shrubs and small trees at forest edges, streamside thickets, and old fields. Its diet consists primarily of insects and berries, with insects being the primary food during early summer, with the occasional suet.

Being a songbird, the gray catbird is a master of mimicry, being able to imitate a variety of bird species, as well as the first calls of the Pacific chorus frog, in a complex, jumbled song. Only by listening carefully will you be able to distinguish the bird due to its second call being more similar to a bird’s trill. 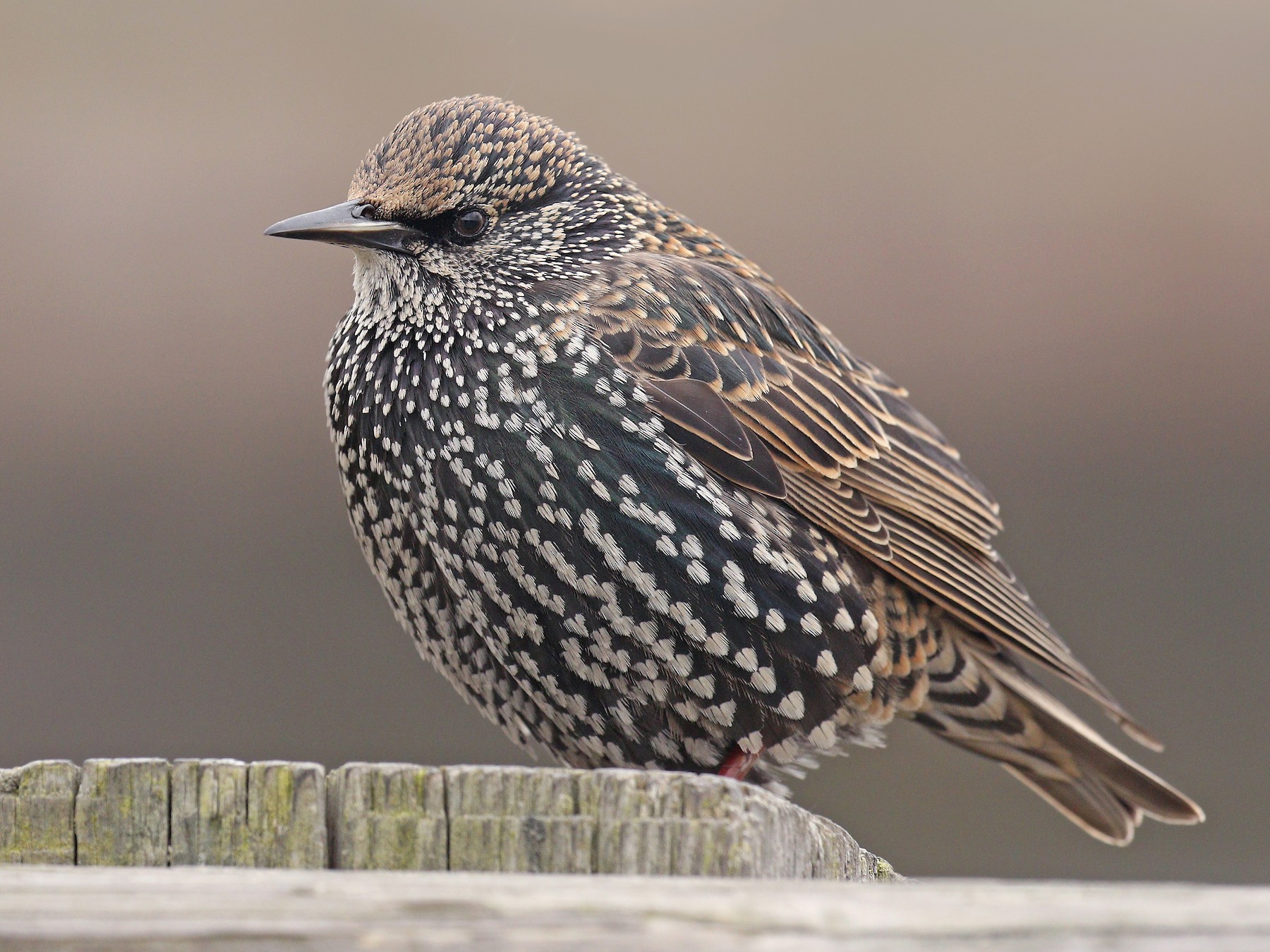 The European starling is a medium-sized passerine bird that has a rather stocky and dark plumaged body with a short tail, triangular wings, and a long, pointed bill.

Depending on the environment and timing, their plumage can either be purple and green iridescent or consist of white spots over the body. Originally from Eurasia, they’re now introduced to many areas over the world, where you can find them in open grasslands or habitats with low tree cover. Their diet ranges from insects to berries, fruits, and seeds.

The European starling is very vocal and not only makes a variety of sounds but also mimics the calls of many other birds and animals, including frogs, goats, and cats. They can imitate the frog’s “rib-bit” to such a degree that it can deceive other animals of the bird’s location and prevent predation. 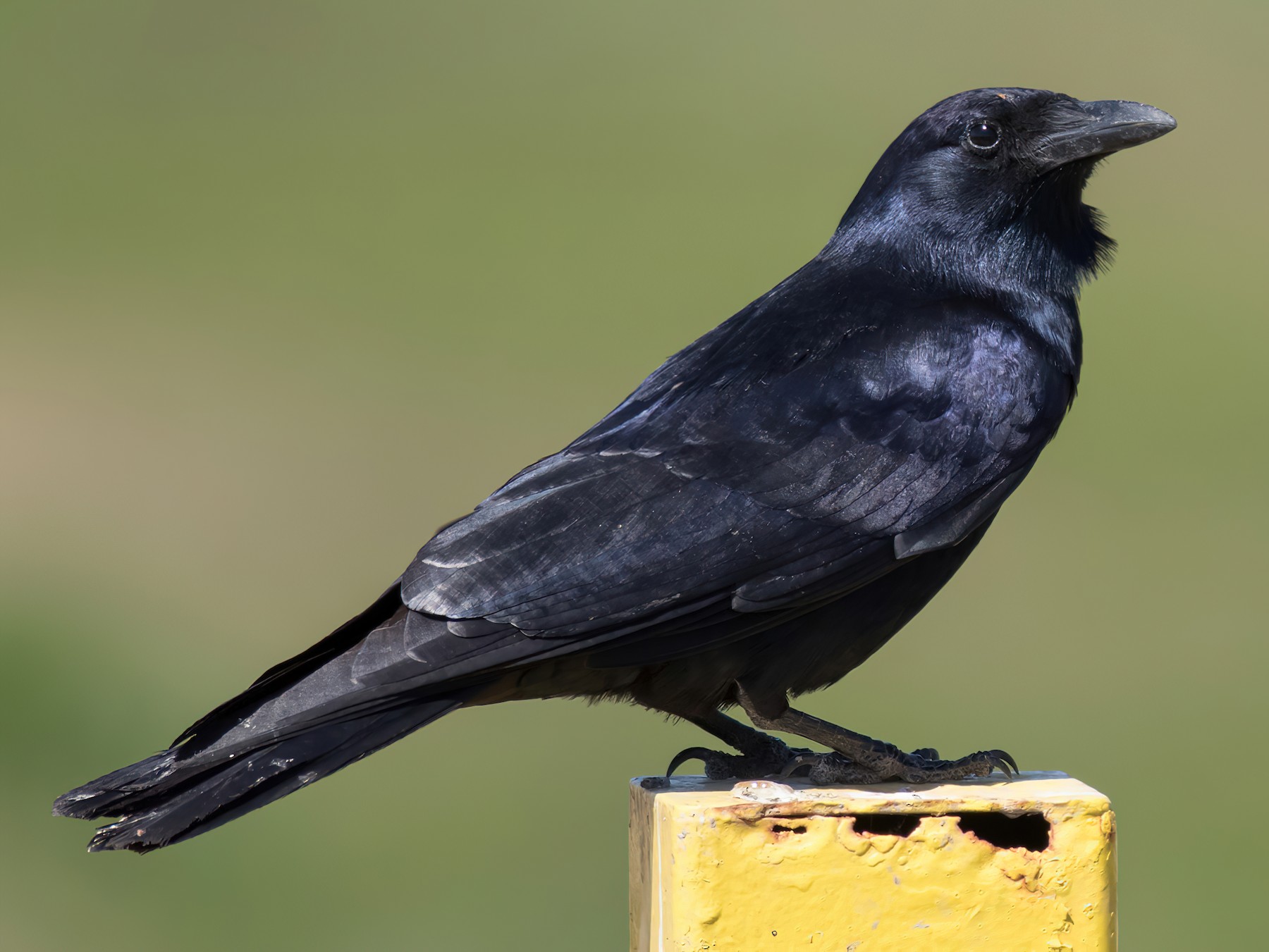 The Tamaulipas crow, otherwise known as the Mexican crow, is a small and sleek crow endemic in Northeast Mexico that consists of glossy, iridescent plumage, a slender and black bill, and thin legs and feet.

Their habitat consists of farmland and semi-open areas with hedges and tall trees, which can also include towns, villages, and farmland. Their diet is mainly omnivorous, consisting of mainly carrion, insects, and seeds.

Unlike previous birds, the Tamaulipas crow has a natural call that sounds similar to a frog. Specifically, they make a low croak that can sound like a “gurr”, “croak”, or “creow”. 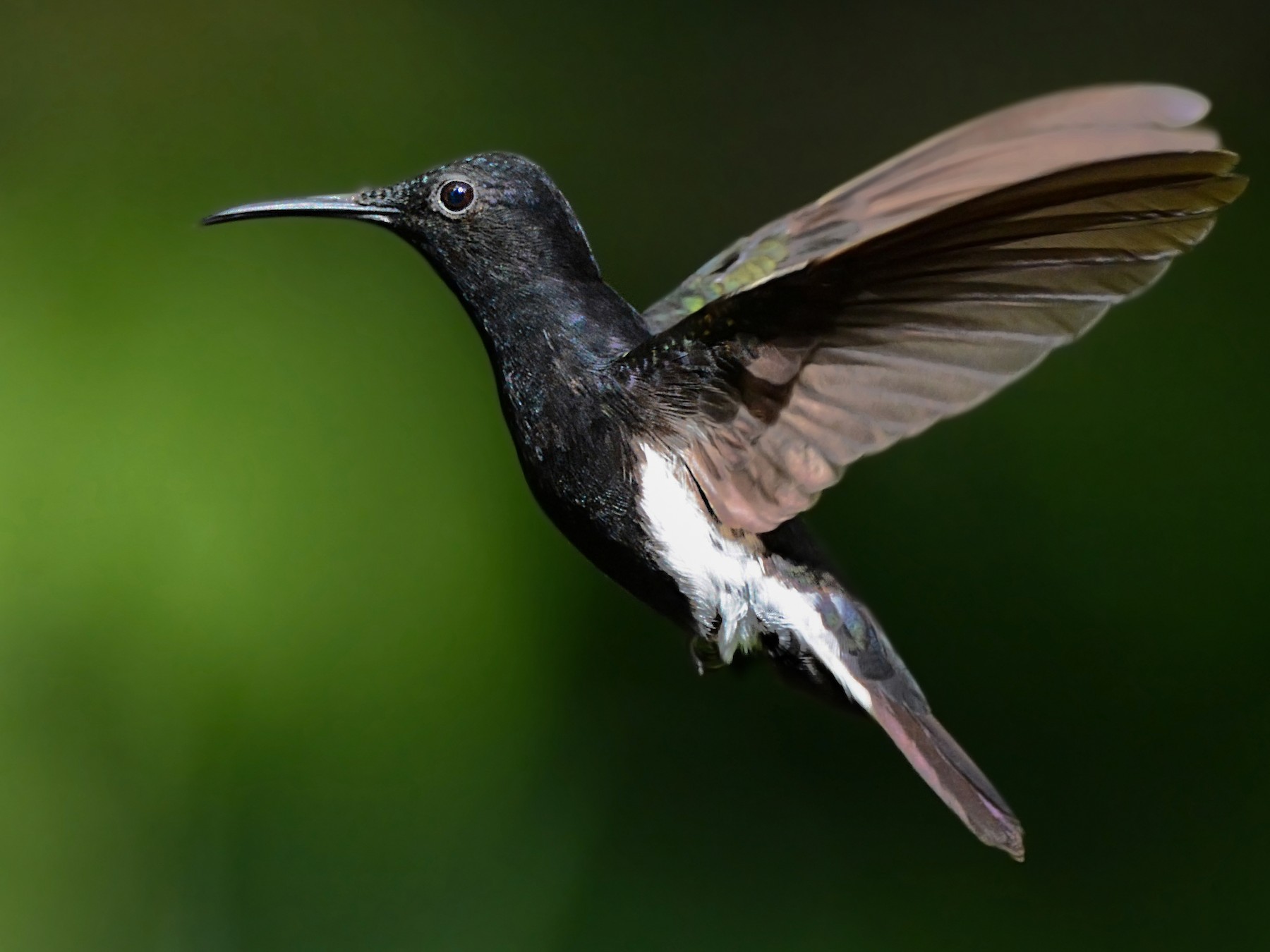 The black Jacobin is a large and aggressive hummingbird that is mostly black plumaged with white flanks and a white tail with a black center and a thin black band.

They can be found in a variety of habitats ranging from woodlands and forest edges to feeders and gardens. As a hummingbird, the black Jacobin feeds on nectar from flowers that it forages from the understory to the canopy.

The black Jacobin is known for making high-pitched calls that sound very similar to the closely sounding high-pitched streaks of the desert rain frog. Their calls can also resemble crickets, which makes them particularly hard to identify unless you’re able to see them. The common raven is a large perching bird that is entirely black, including its legs, eyes, and beak. An extremely adaptable bird, it can be found in a variety of habitats, including hot deserts and the high arctic tundra.

This has allowed them to make a comeback after having been driven from its original eastern range. They prey on almost anything but usually prefer insects, rodents, lizards, frogs, and the eggs and young of other birds.

The common raven can make a variety of calls but is probably best known for making a low-pitched croak that can sound similar to that of a frog. Their low-pitched croaks have become an easy way of identifying them, but if they’re out of sight, it can be difficult to distinguish them from frogs. The California thrasher is a rather large passerine bird that consists of a long tail, a long, slender curved bill, grayish-brown plumage, and warmer orange color on the underside.

The California thrasher is well known for its mimicry ability, which allows it to imitate various bird species that share its habitat, as well as frogs and coyotes. It can be difficult to tell you’re listening to a bird and not a frog’s calling without seeing them. 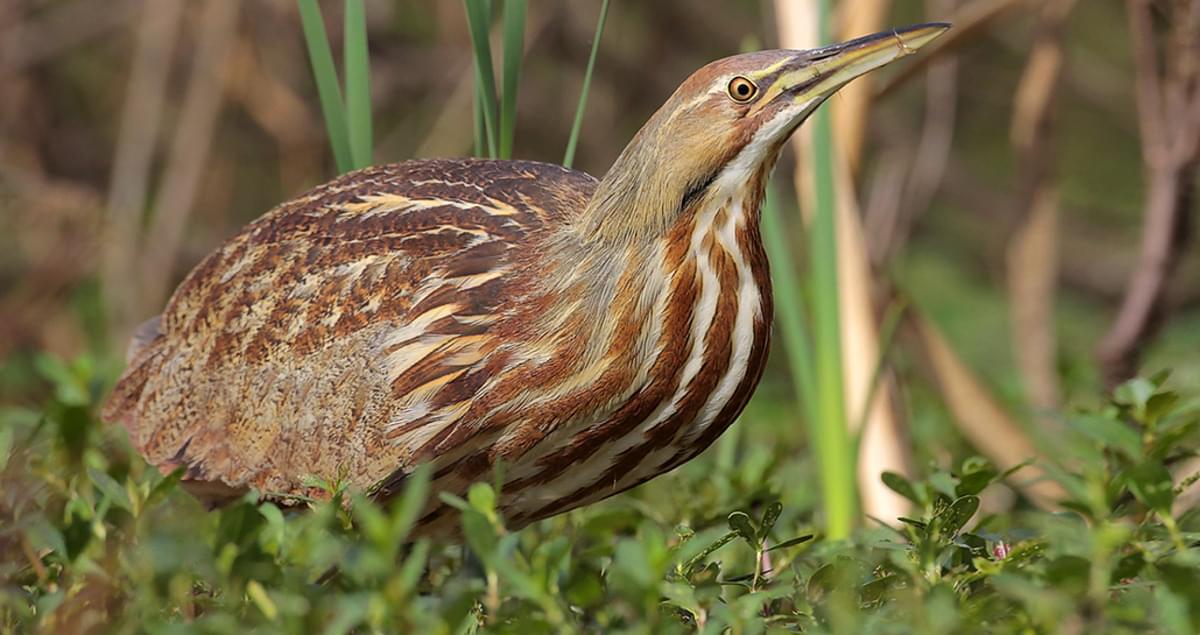 The American bittern is a stocky heron that consists of brown plumage, a striped neck, and plain unspotted wings. They can be difficult to see due to their secretive nature hiding in marshes and bogs, but they do occasionally come out into the open at dawn or dusk. Their diet includes mainly fish and other marine organisms such as frogs, crustaceans, and salamanders.

Their vocalization can be quite a treat as they’re typically loud, booming, and resonating, which, combined with their surroundings, can sound like the croaks of a frog. These low-frequency calls allow them to travel further in the vegetation so that male and female individuals can locate each other. 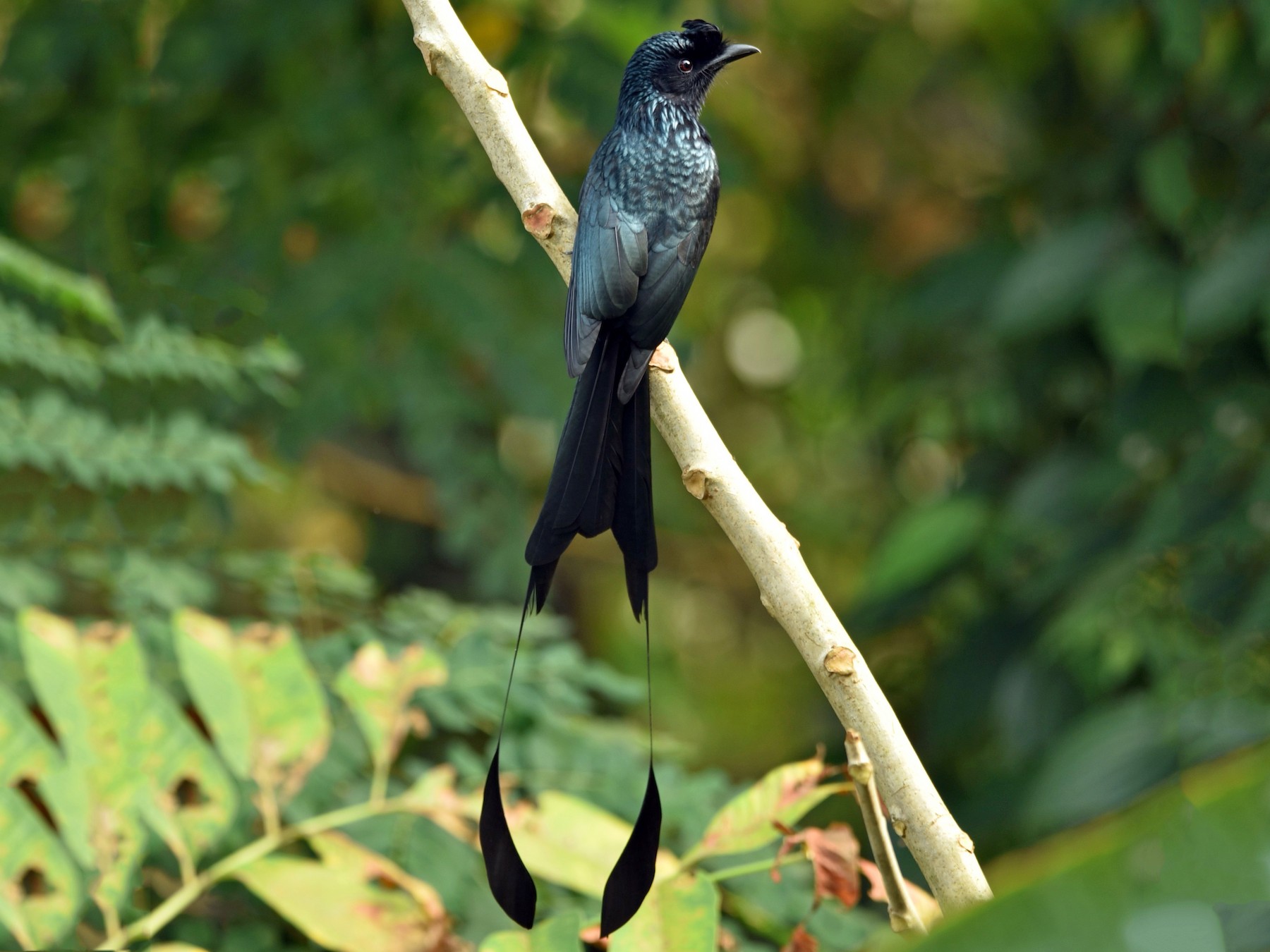 The greater racket-tailed drongo is a large drongo that consists of black plumage, a notched tail with long outer tail streamers, a glossy neck, and a backward curving crest. They can be found in woodlands and forests, where they feed mainly on insects but also fruit and nectar.

The greater racket-tailed drongo is a highly skilled mimic with a high variety of vocalizations ranging from metallic jingling sounds to the sounds of dozens of other bird species, mammals, and at least two known frog species.

Contrary to popular belief, the calls of frogs are not limited to them. Several bird species are highly adept at mimicry, and many can imitate frogs so well that it’s almost impossible to tell that they’re not only frogs but aren’t even amphibians or land animals. This is one of the reasons why only having a good ear isn’t enough if you want to be a true birdwatcher.

18 Birds That Can Camouflage Really Well