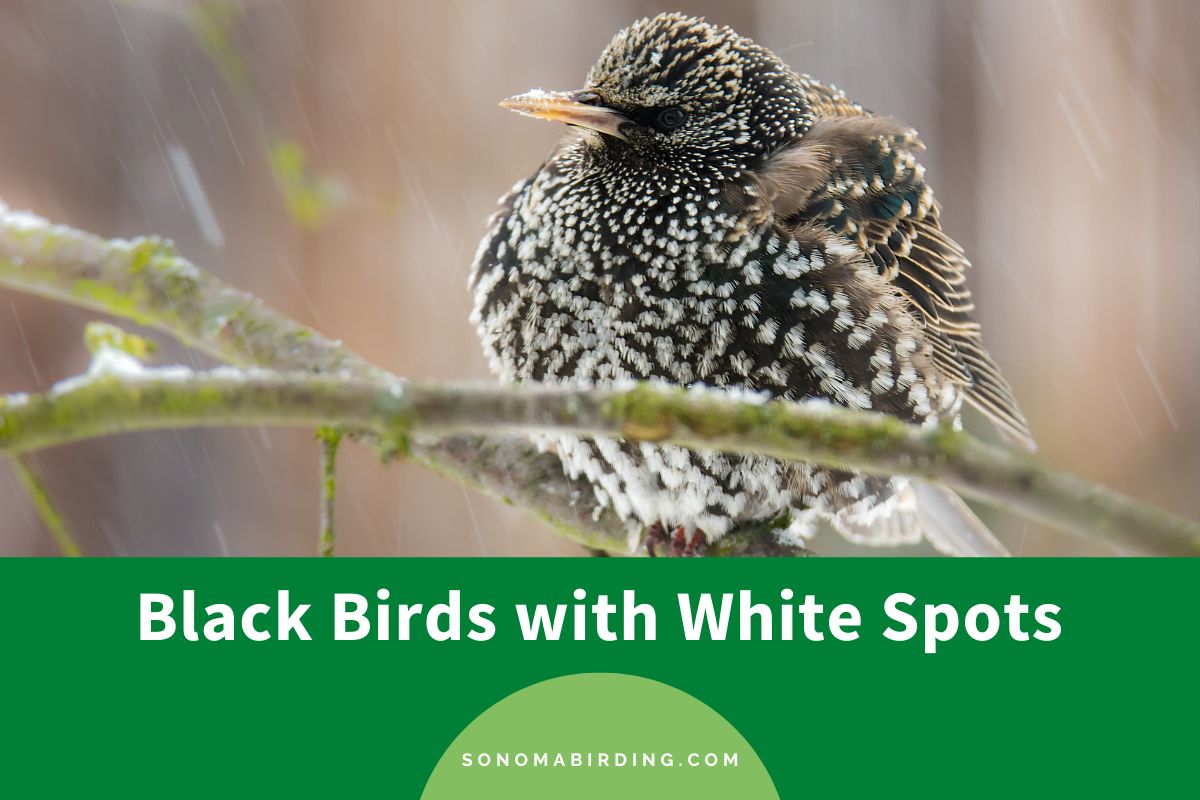 Birds have a huge amount of variety in their appearances, from color to shape to patterns. Some may have completely solid colors throughout, while others may have a combination of two, three, or multiple other colors. In this article, we’ll look at several birds that specifically have black plumage with white spots. These patterns typically are the result of either natural or sexual selection and, as you’ll see, can appear all over the world. 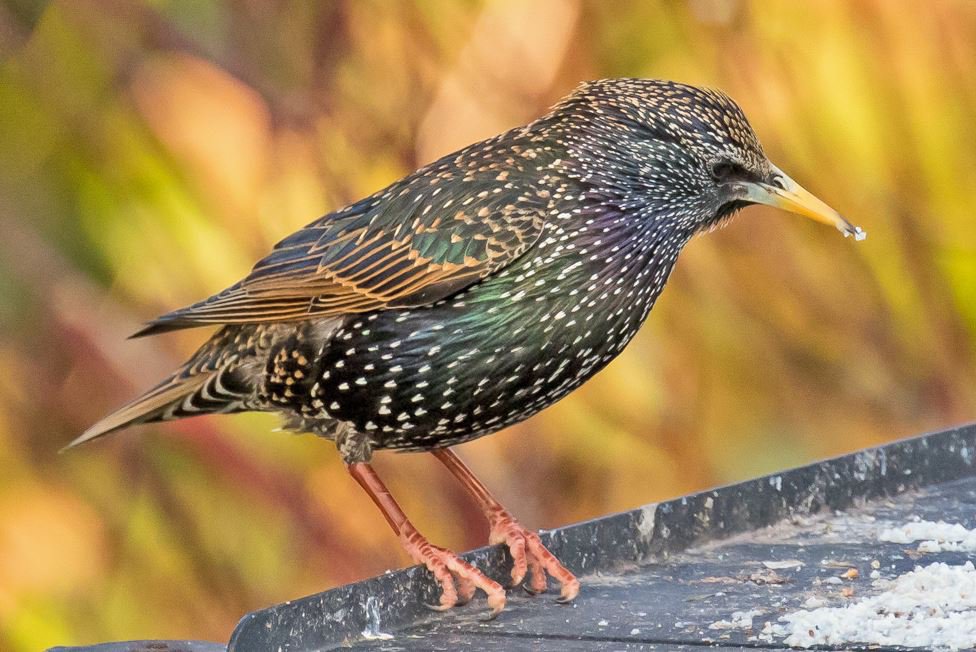 The common starling/European starling is a stocky bird with a short tail, triangular wings, and a long, sharp bill. They are uniformly black with a glossy sheen and can show purple or green iridescence on the body during the breeding season. During winter, white spots cover their bodies.

The common starling/European starling inhabits a variety of open habitats, such as open grasslands or areas with low tree and shrub cover. They’ll also visit urban areas and bird feeders, where they are often aggressive to other birds.

This bird feeds mostly on insects, such as beetles, grasshoppers, and flies, when available. Otherwise, when insects are scarce, such as during the fall and winter seasons, the bird will eat various berries, fruits, and seeds. 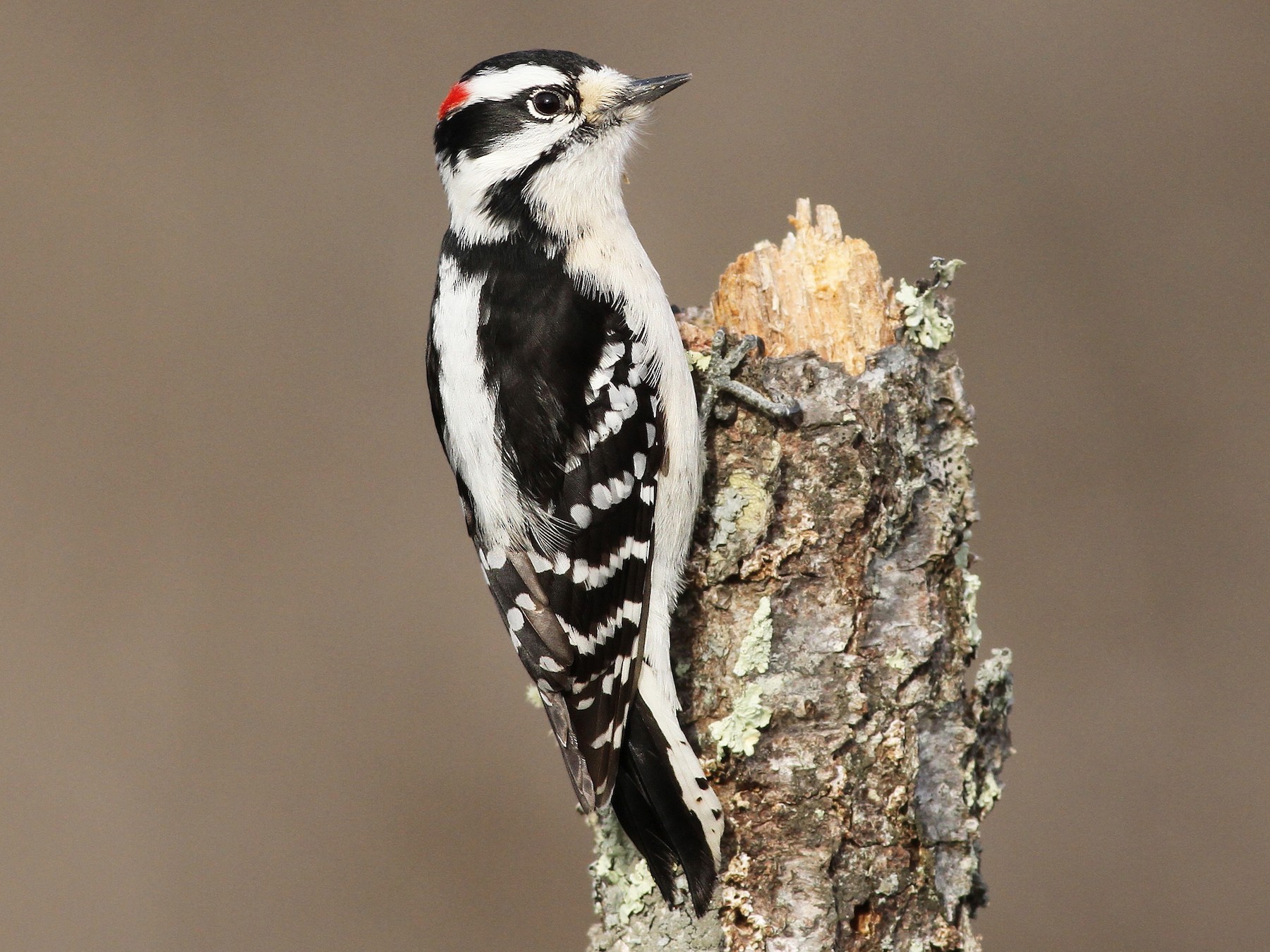 The downy woodpecker is a small woodpecker consisting of black plumage with white streaks, a very short bill, and black outer tail feathers with white spots visible in rows. The pacific population has smaller white spots on their wings, along with a grayer body than the eastern population.

Typical habitats for the downy woodpecker include forests and areas with woodlots, willows, river groves, orchards, or shade trees. They can be found in any wooded habitat, but the western population tends to prefer riparian areas.

The downy woodpecker eats mainly insects, such as beetles, ants, and caterpillars. Other foods might include berries, seeds, grains, acorns, and sap. They are also particularly fond of suet from bird feeders. 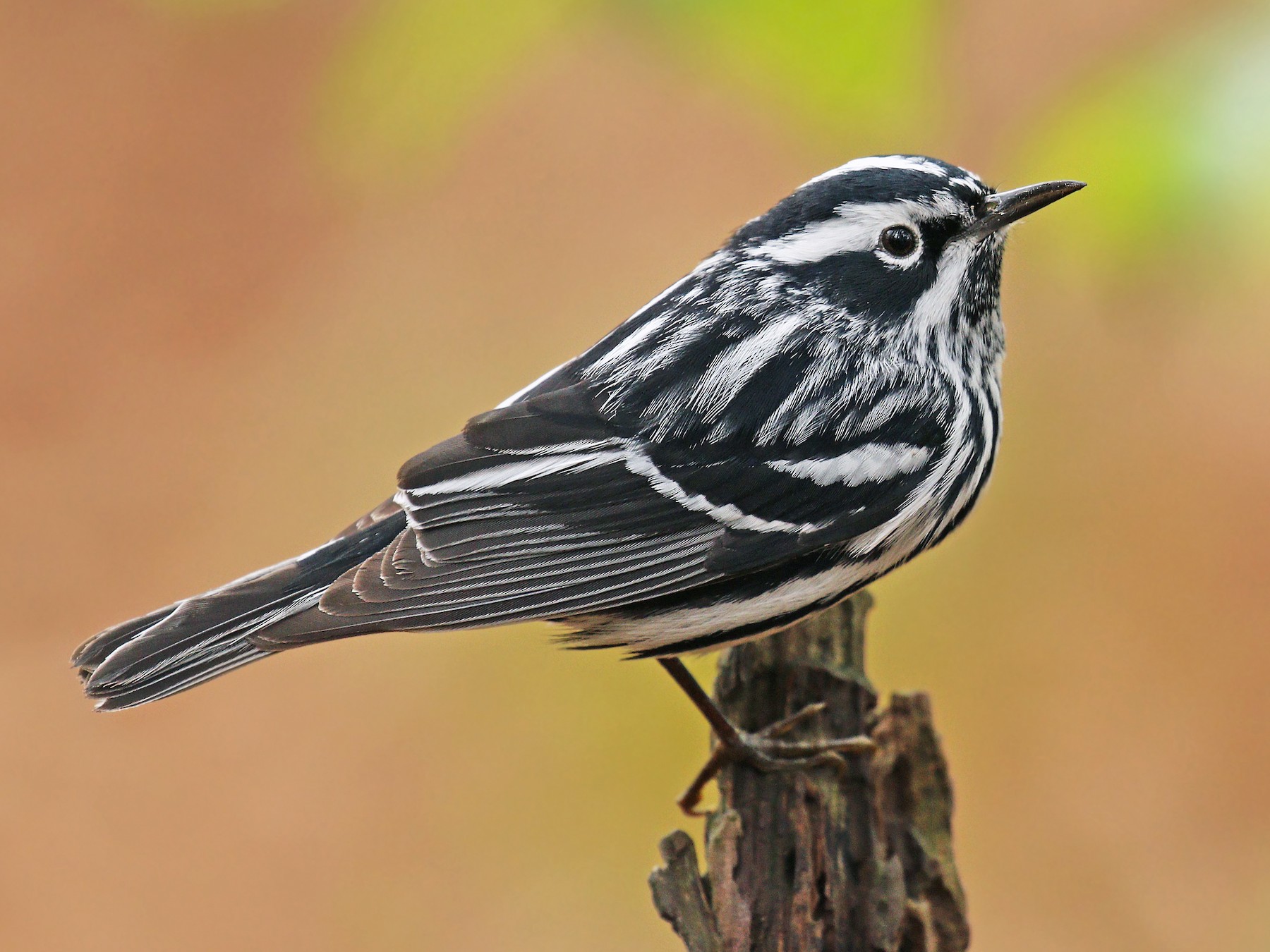 The black-and-white warbler is a unique warbler with black and white streaks throughout its body, along with black wings with white wing bars. When the wings are folded, the white wing bars look more like white spots. Adult males have black throats and cheeks, while females and juveniles have white throats and paler cheeks.

This bird breeds in deciduous or mixed forests and winters in many wooded habitats going as far south as northern South America.

The black-and-white warbler is an insectivore that feeds mainly on insects, such as caterpillars, beetles, ants, flies, and true bugs, along with spiders and daddy longlegs. 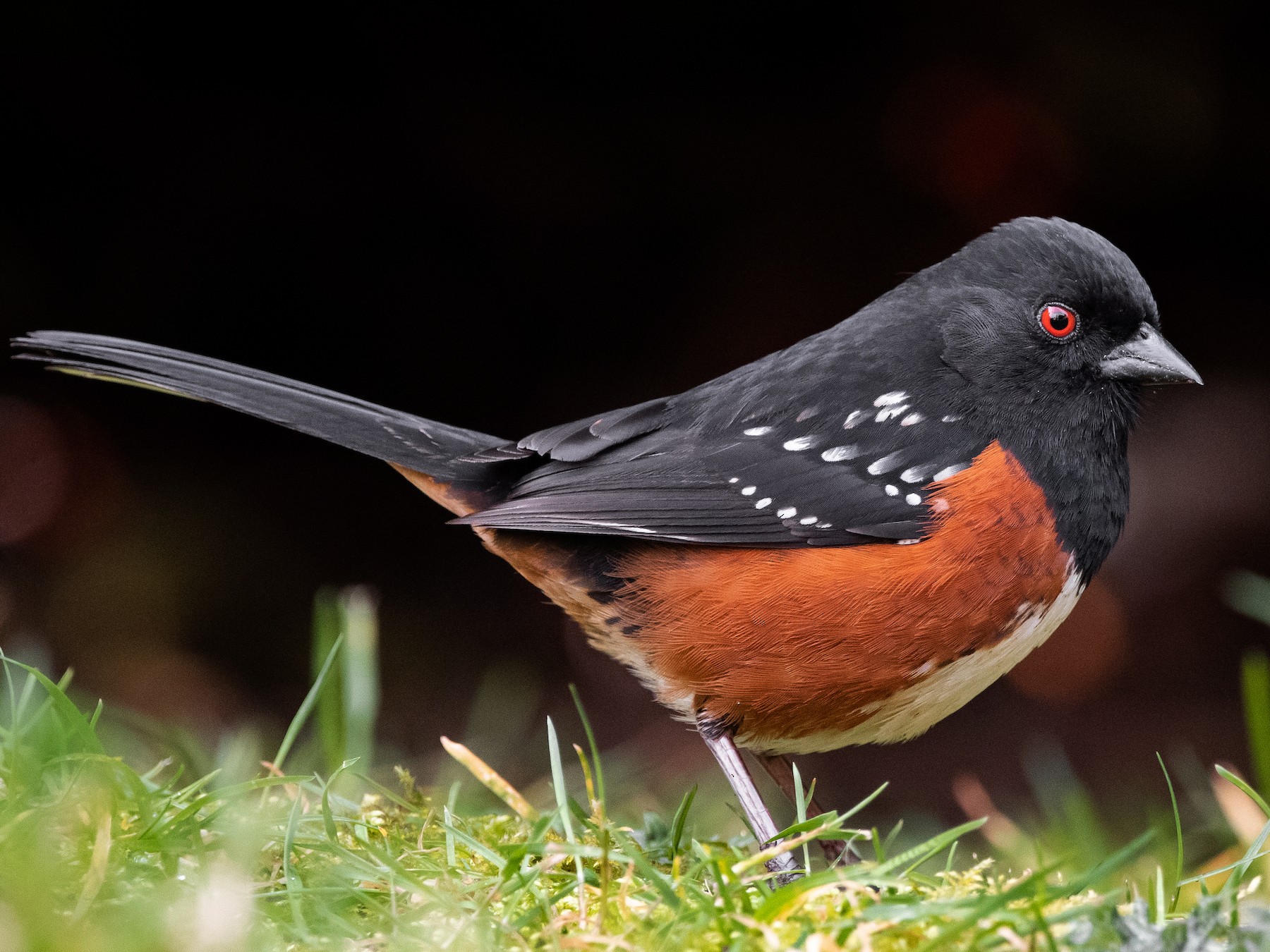 The spotted towhee is a large sparrow with a long tail, red eyes, bright rusty sides, and a white belly. They have black upperparts with white spots on the wings and back and have white corners on the tail, which is noticeable in flight. The females are grayer than the males.

This bird inhabits scrubby areas and forest edges that contain thickets. They also prefer open woods with clear undergrowth or woods with scrub oaks and a dense understory. They are also known to visit bird feeders.

The diet of the spotted towhee consists mainly of insects, seeds, and berries, the exact kind of which varies with the season. They feed mainly on insects, such as beetles, caterpillars, and moths, during the summer. This changes to include more seeds, acorns, berries, and small fruits during fall and winter. 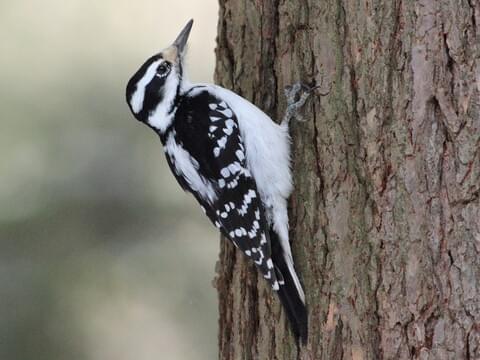 The hairy woodpecker is a medium-sized woodpecker that consists of black upperparts with white wing bars on the wing feathers, which resemble spots when the wings are folded.

The hairy woodpecker can be found in both coniferous and deciduous forests, as well as urban areas such as parks and other places with trees. They are frequent visitors of bird feeders, where they will feed for suet.

The hairy woodpecker feeds mainly on insects, such as the larvae of wood-boring beetles, adult beetles, ants, and caterpillars. They also occasionally eat berries, seeds, nuts, and sap from damaged trees. The yellow-bellied sapsucker is a distinctive sapsucker with long white wing patches, a checkered black-and-white back, and the namesake yellow belly (which interestingly can be difficult to see and sometimes completely absent).

The adult male has a red cap and throat, while the female has a white throat; juveniles are brownish-gray overall. Compared with the red-naped sapsucker, the yellow-bellied sapsucker has a complete black border around its red throat patch, and the white spots on its back are more extensive.

The yellow-bellied sapsucker lives in hardwood and conifer forests, where they often nest in the groves of small trees up to 6,500 feet. They spend their winters in open woodlands as far south as Costa Rica.

About half of the yellow-bellied sapsucker’s diet is made up of sap and sapwood. The other 50% consists of wild berries, fruits, and insects that are attracted to the sap on which this bird feeds. 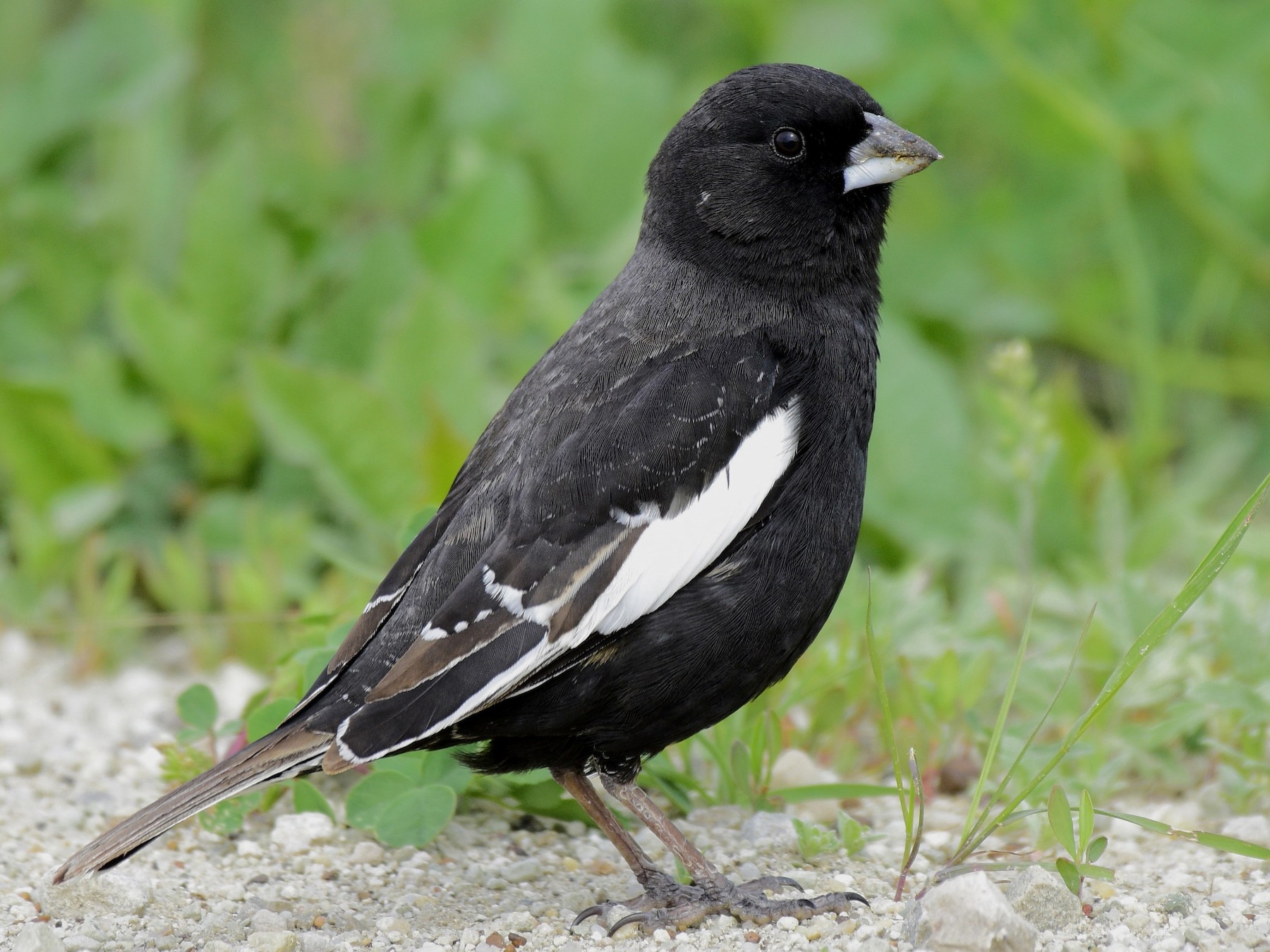 The lark bunting is a stout sparrow with a short thick silver bill. Breeding males are almost completely jet black with a bright white patch on each wing, which appears as spots when folded over. The nonbreeding males, females, and juveniles are of a pale streaky brown plumage with the same white wing patches.

This bird breeds in grasslands and in shortgrass prairies in particular. They will migrate to open areas such as grasslands, deserts, and agricultural areas (where they can often be seen perched on a fence or the ground) during the winter.

Like most sparrows, the lark bunting feeds on seeds, invertebrates, and some fruits. They eat mainly insects, such as grasshoppers, beetles, and ants, during the warmer months and then change to a more plant-based diet when temperatures drop. 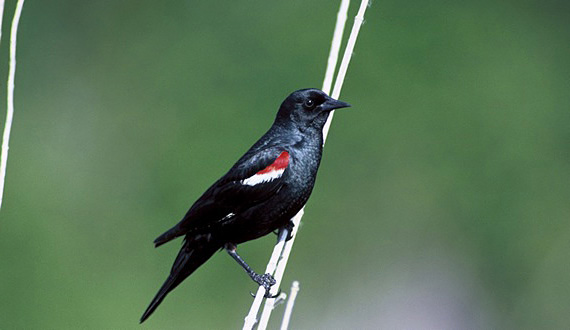 The tricolored blackbird is a passerine bird that, for males, consists of glossy black plumage with a red shoulder patch and white borders and, for females, dark brown with streaks. White spots can be seen on the back of the bird. Both sexes have thin and sharp bills.

Typical habitats for the tricolored blackbird include wetland and grassland habitats. They may also be found breeding in rice-growing regions and pasturelands. There is a significant population decline due to habitat loss.

The tricolored blackbird feeds mainly on insects and seeds, which they pick up from the ground or shrubs and occasionally from the air. Insects include grasshoppers, beetles, weevils, and caterpillars, among others. They are frequent eaters of livestock grain. 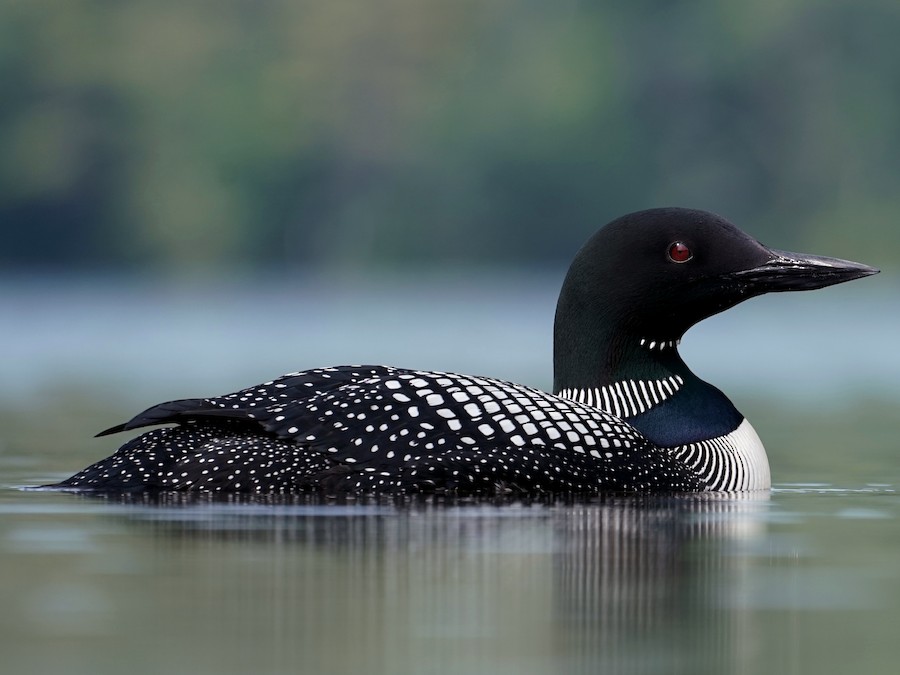 The common loon is a large loon with breeding adults having striking black-and-white patterns (appears as black plumage covered with many small white spots), a checkered back, and a black head that comes with an iridescent sheen.

Nonbreeding adults have plainer gray plumage above and white plumage below, separated by a jagged border on the neck. All come with a heavy bill that is typically held straight.

The common loon breeds on lakes and ponds that are surrounded by boreal forests in Canada and the northern United States. They will migrate to the warmer coastal ocean waters during the winter.

The common loon’s diet consists mainly of fish, such as minors, suckers, perch, rock cod, and killifish. They may also eat the occasional crustacean, mollusk, leech, frog, or other aquatic insects they come across. The anhinga is a water bird that consists of a long neck and a dagger-like bill that is used to spear fish underwater. The males have black plumage throughout with white spots and streaks on the wings, and the females are similar but of brown necks and heads. They often swim with only the head and neck out of the water.

Typical habitats for the anhinga include wooded swamps, marshes, and ponds. They overall prefer areas with shallow, slow-moving waters where they can use the nearby perches and banks for drying.

The anhinga eats mainly small to medium-sized wetland fishes, along with a small number of crustaceans, amphibians, insects, reptiles, and aquatic invertebrates. 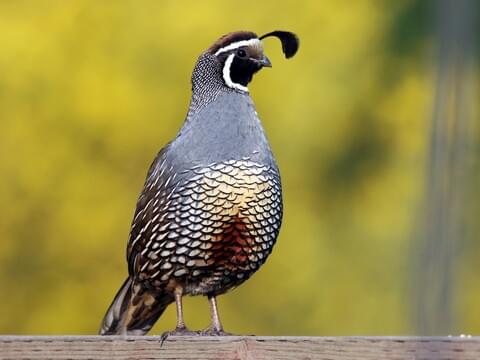 The California quail is a small and stout bird with teardrop-shaped plumes protruding from the forehead. Though they may look brown and gray from a distance, they’re dark gray and black with white spots and streaks on the sides, along with a scaly underside. The males have a black face and a longer and more curled crest than the females.

The California quail prefers open and scrubby habitats where there are food-producing plants and shrubs for cover. Most forest types, as well as some residential areas, parks, roadsides, and traditional agriculture, fit this description.

The California quail’s diet consists mainly of seeds, as well as other plant materials such as leaves, flowers, and catkins. They also eat occasional small invertebrates such as caterpillars and snails when they come across them. 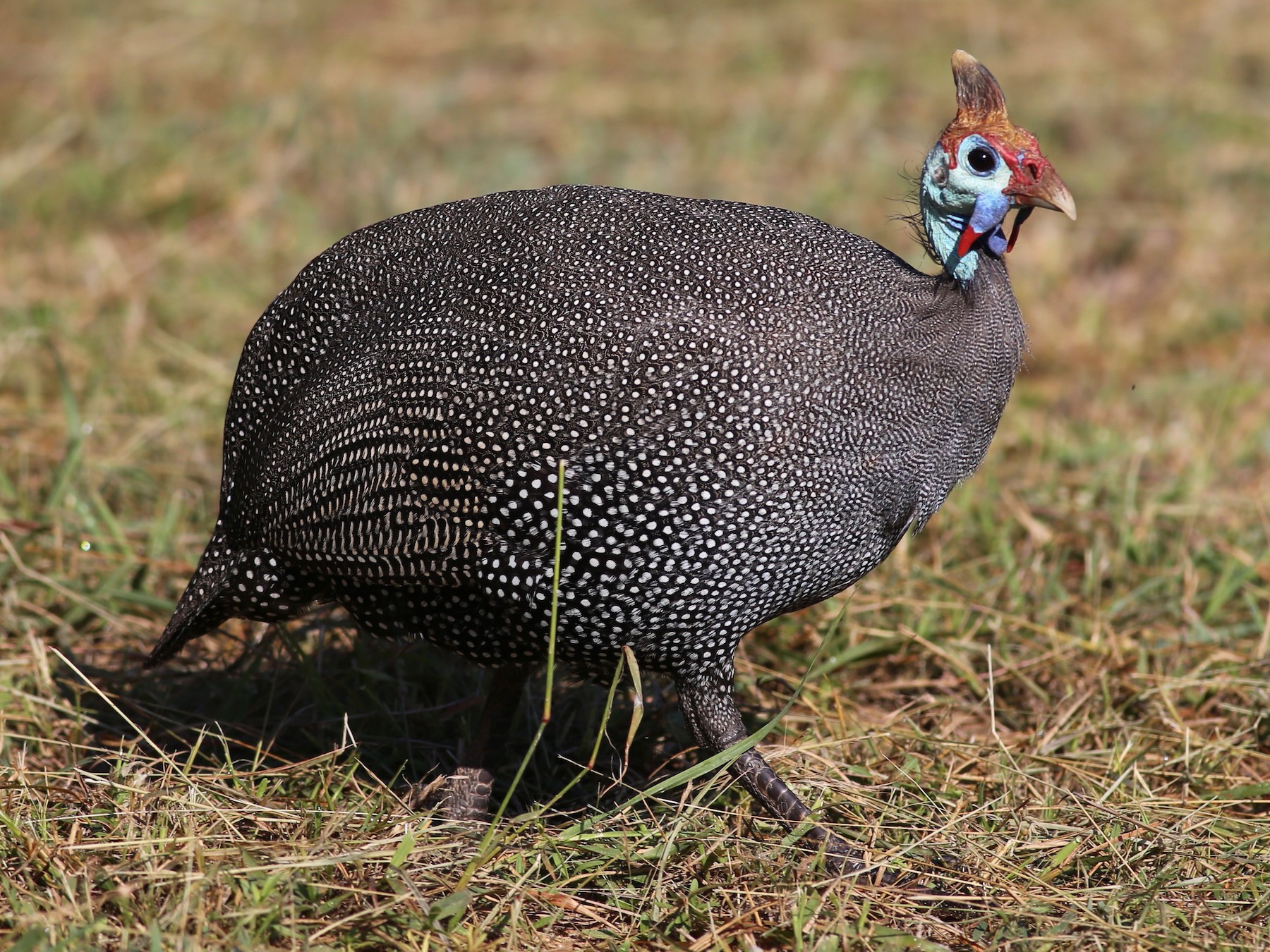 The helmeted guineafowl is a large gamebird consisting of a small head and dark grayish plumage with hundreds of white spots. The head has a bone-like casque and warty facial skin, which can appear in different colors, such as blue, white, or red, depending on the location. Juveniles are brown throughout.

Typical habitats for the helmeted guineafowl include shrubby savannas and open countryside, though they can pretty much survive in any habitat besides extremely arid areas and rainforests.

The helmeted guineafowl is a ground feeder that eats a variety of plants and animals, such as seeds, berries, worms, insects, snails, spiders, and small mammals. 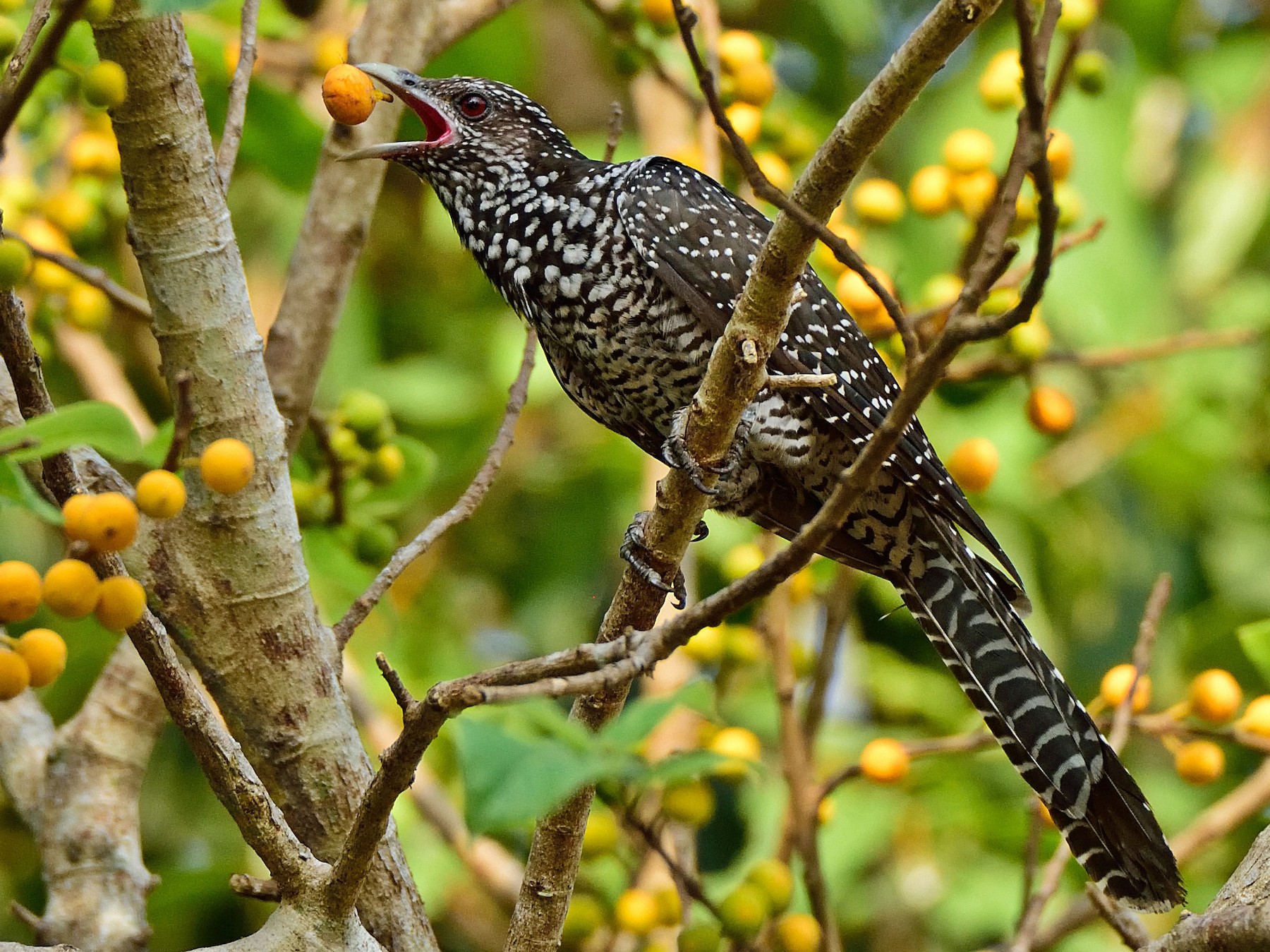 The Asian koel is a large cuckoo, with males being glossy black with a large lime-green bill and females and juveniles being blackish brown with white spots on the wings and streaks on the head and throat. All adults have dark red eyes.

The Asian koel tends to hide in the interiors of dense trees in various habitats, such as forest edges, wooded areas, mangroves, parks, and gardens. They may also be found in more urban areas, such as cities and urban fields.

As omnivores, the Asian koel feeds mainly on fruits, insects, lizards, and the eggs of other birds and animals. As adults, they depend more on the fruits of fig trees and other trees. 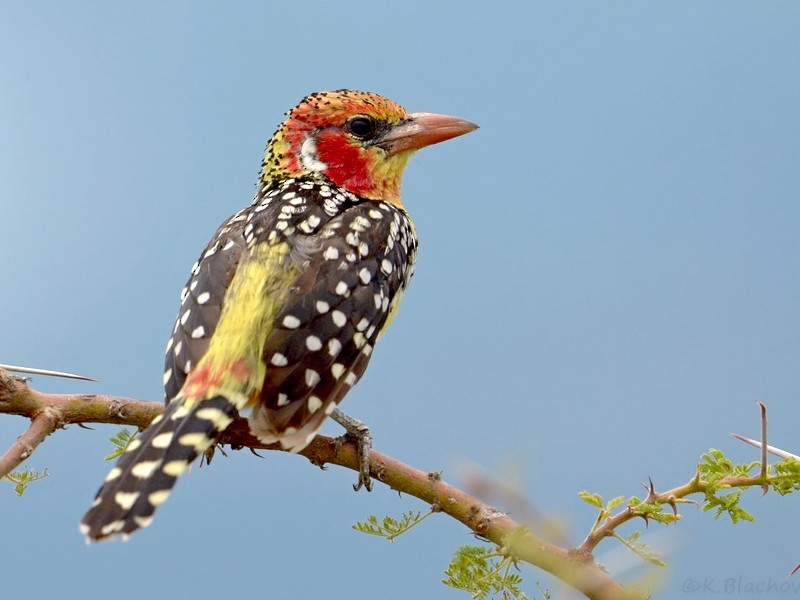 Typical habitats for the red-and-yellow barbet include dry savannah with termite mounds, deserts, and scrublands.

The red-and-yellow barbet consumes mainly seeds, fruit, a variety of insects, and invertebrates. Examples of insects include beetles, mantids, grasshoppers, locusts, termites, and ants, as well as insect larvae. 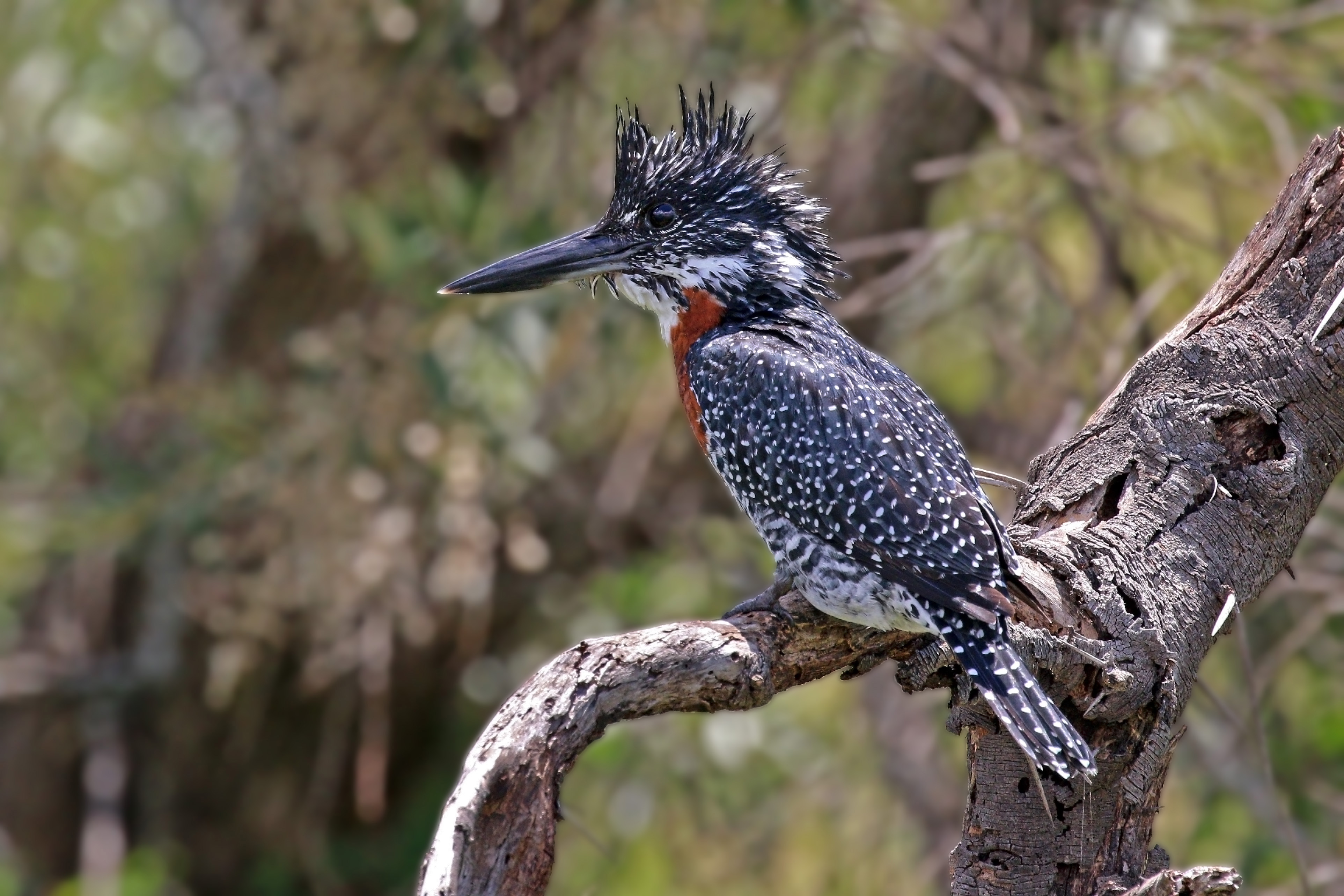 The giant kingfisher is a large kingfisher with an enormous dagger-like black bill and a small crest. They are black-plumaged on the head, wings, and back and have white spots throughout the body. The sexes differ in the area of the chestnut-colored plumage: males have it on their upper breast, while females have it on the belly and underwings.

The giant kingfisher can be found near freshwater rivers, lakes, swamps, saltwater estuaries, mangroves, and coastlines.

The giant kingfisher feeds mainly on animals, such as fish, crabs, frogs, and invertebrates, with the occasional small reptiles or insects.

As you can see, despite black plumage with white spots being so specific, there are many birds across the world that have this unique trait. It shouldn’t be too difficult for you to spot them from a close distance as long as you know where to look.