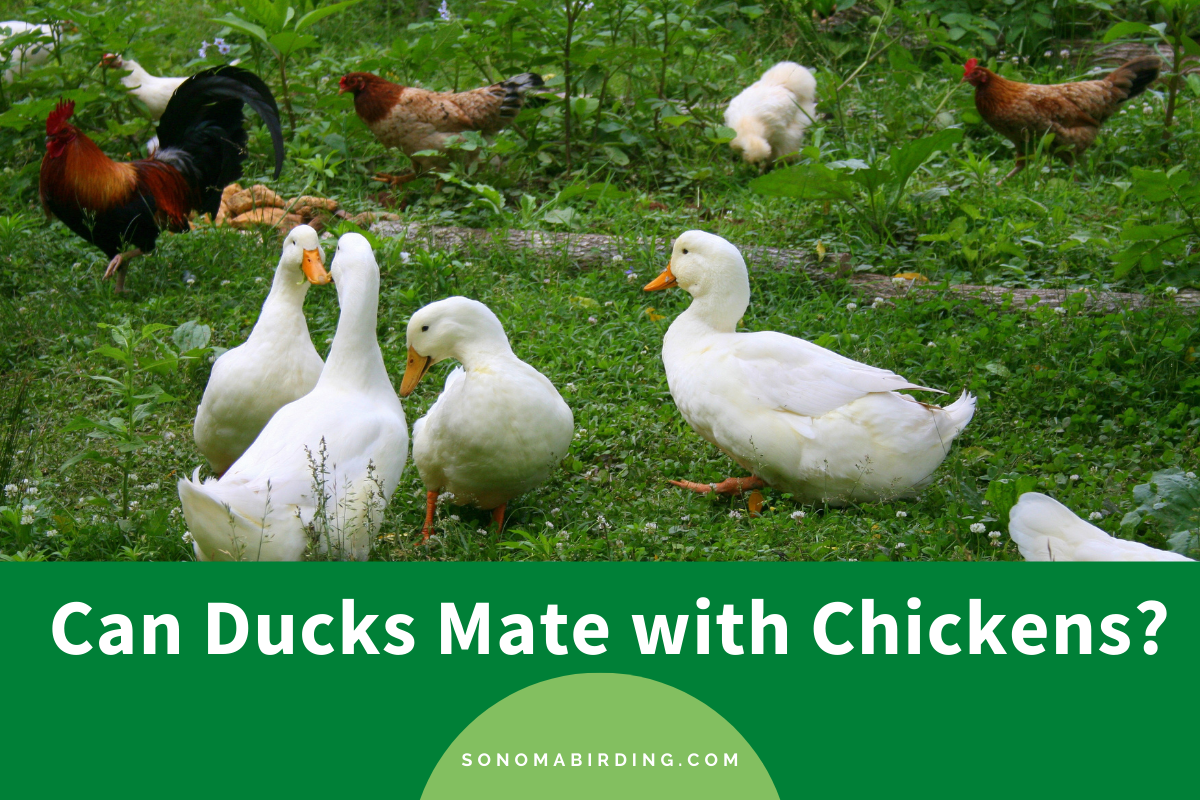 Can ducks mate with chickens? No, ducks and chickens can’t mate with each other. Chickens possess cloacas and reproduce by rubbing them together. Whereas, among the ducks, the drakes possess a penis and their hens, a vagina. Because of the obvious differences in their anatomies, it is physically impossible for ducks and chickens to mate.

Are you curious about the cross-breeding between these birds? Or do you want to learn more about raising them on the same farm? Whatever your related queries are, they will be answered in this article.

The anatomy and mating behavior of ducks and chickens

It is quite common for people to come up with lofty ideas, particularly these days with the internet claiming to have the proof of all kinds of unimaginable things.

However, before you give your imagination a flight, let’s stay grounded and approach this question logically: Is it possible for ducks to mate with chickens? The best way to come up with an answer to this question lies in looking at the anatomy of these birds and seeing if it’s physically possible.

That’s exactly what we plan on doing here. Let’s get started with the ducks and then move on to the chickens.

Anatomy and mating behaviors of chickens

When it comes to mating, both roosters and hens possess the same reproductive organ, which is called “Cloaca” and is an opening present in their vent region. Other than their mouths, this is the only opening they possess, which is used by them to release both their urine and excreta.

As we mentioned earlier, these birds use their cloaca for mating as well. While mating, the rooster and hen rub their cloacas together for several minutes.

In this process, the sperms from the rooster’s cloaca are transferred into the hen’s cloaca. These sperms will later fertilize the hen’s eggs. For this reason, their mating process is also known as the “Cloacal Kiss.”

Besides, the courtship rituals among the chickens cannot be called much of a spectacle. As a general rule, the rooster will court the hen, trying to entice them by performing a dance.

During their performances, the roosters will lower one of their wings and move in circles around it. If the hen is interested in mating, it will lower its body, bowing down next to the rooster, signaling its acceptance. This is followed by a short period where the rooster feeds the hen and prepares for the mating.

Anatomy and mating behaviors of ducks

While most birds possess cloacas, ducks are not one of them. While they’re birds, their reproductive system is a lot like mammals; the drakes possess a penis, and the hens have a vagina (or an oviduct).

Although the ducks generally prefer to mate in water for more convenience, they can also do it on land. While mating, the drakes climb on top of the hen and position themselves in such a way that their penis lines up with the female’s vagina.

Once the alignment is arranged, the penis pushes inside its oviduct, allowing the transfer of sperms. The entire process doesn’t last longer than a few seconds.

And although ducks have a short mating session, their courtship rituals are rather elaborate, more so than the chickens. Unlike the roosters, the drakes are highly aggressive around their mating season.

They will display elaborate performances to win an attractive mate and will indulge in various courtship rituals like nod swimming, grunt whistling, and bobbing their heads in sync before they start mating.

Problems with cross-breeding these birds

If you’ve gone through the last two subheadings carefully, you already know that ducks and chickens possess different anatomies. For these reasons, it’s physically impossible for these birds to mate with each other.

For instance, even if a rooster wants to mate with a duck hen, it would lack a penis. In other words, there’s no way for them to transfer their sperm deep inside the duck hen’s oviduct in order to fertilize their eggs.

On the other hand, while a drake would possess a penis, the cloaca of the chicken hen is substantially smaller and not suited for penetration. So, if these two try to mate, the female could end up being injured.

To sum it up, we can say that mating between a duck and a chicken is physically impossible.

The hybrid of ducks and chickens: what will it be like?

In the last section, we clarified that there’s no possibility of mating between ducks and chickens. However, if you’re still curious about what the offspring of a duck and chicken would be like, let’s draw a hypothetical picture of it.

If a duck and a chicken were to breed, the resulting offspring would be incapable of reproducing with either ducks or chickens. In other words, they’re more likely to be sterile. They’re also very likely to have weaker immune health and might not even live long.

Because of the difficulty of fertilization of a hybrid egg between these birds, you cannot hope to eat these eggs. For these reasons, it is best not to experiment with cross-breeding between ducks and chickens.

Raising ducks and chickens together: things to keep in mind

Now that we’ve already established that breeding between ducks and chickens is not a good idea, are you wondering whether these birds can be raised together at all? Because they can be.

There are many successful examples of ducks and chickens being raised together on the same farm, and you can do it, too. However, if you’re new to the concept, there are some things you might want to keep in mind to avoid any disaster.

First and foremost, there’s the concern of water. Ducks are water birds that enjoy being around water to play in it from time to time. On the other hand, chickens, with their non-waterproof feathers, are quite clumsy around water and can easily drown. To accommodate both these birds, you’ll have to strategically plan the placement of a water tub to keep chickens away.

Moreover, ducks are ground-nesters, while chickens prefer to roost at a certain height from the ground level. For you, this means that you’ll have to provide space for the ducks to nest on the floor, with an elevated coop built for the chickens.

Keeping drakes and roosters in a shared, confined space is also problematic. Since both of these males are territorial and aggressive, keeping them together is a recipe for disaster.

Issues about letting them mate

As most of you already know, all birds have a biological clock fixed in their consciousness. It is this clock that tells them when their mating season is approaching. Around this time, you can expect more aggression from both the drakes and roosters.

If unable to find a female duck or hen in sight, the males might even try to mate with the females of the other species. Such behavior should be strictly controlled on your farm, particularly in the case of a drake and a chicken hen.
Drakes have an outward penis that can cause physical damage to the chicken hen. On the other hand, if your rooster tries it with the duck hens, it’s mostly harmless.

Many farm-owners rear chickens and ducks for their eggs. Are you one such farm-owner who’s unwilling to deal with raising both ducks and chickens together? It is understandable since these birds can be a handful at times, especially in the absence of more helping hands around.

So, if you were to pick one of these birds and raise them for eggs, which one would be a better choice? Ducks or chickens?

Well, if we were to compare duck and chicken eggs based on their nutritional value, you’ll find that duck eggs have almost twice the nutrients found in chicken eggs.

Additionally, duck eggs also have a thicker shell and can stay fresh for a longer period. And because these factors determine the price of an egg, duck eggs are also more expensive than chicken eggs. So, whether you want to eat these eggs or sell them, duck eggs are a better choice for you.

And finally, we’ve reached the end. Today, we discussed an interesting topic of chickens mating with ducks. We learned how despite being birds, both chickens and ducks possess different reproductive organs, which makes it impossible for them to mate with each other. However, just because these birds cannot mate doesn’t mean they can’t be raised together. In fact, these birds do quite well with one another.