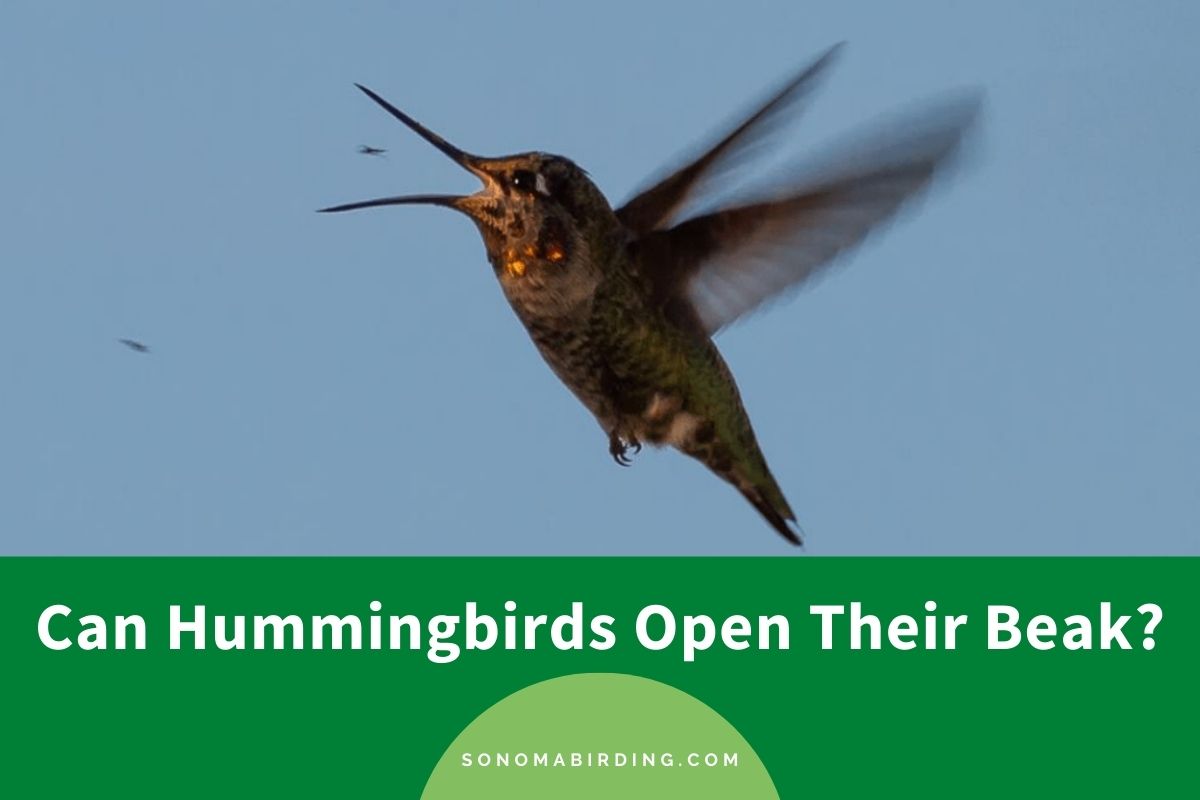 Belonging to the Trochilidae family, the hummingbirds are one of the most amazing creatures in the avian world. Many birders and enthusiasts set up several hummer feeders in their backyard just to get a glimpse of these shining flappers.

Despite being one of the most sought-after backyard birds, the fascinating anatomy of the hummers receives little attention. While most people wonder about their barely visible feet, their beak is another intriguing feature they know very little about.

Can hummingbirds open their beak? Yes, they can. However, because these birds do not need to open their beak for feeding on nectar, it appears as if they never open it at all. In truth, their beak is quite fragile and can break easily. If you want to catch a hummer open their beak, look for them in action while catching insects.

If you’ve ever been curious about the shape and overall use of a hummingbird’s beak, this article is just right for you. Here, you will learn all about the functions of their beak and tongue.

What is the beak of the hummingbirds called?

Have you ever examined a hummingbird’s beak closely? Perhaps not, certainly not in person, as these birds won’t dare come that close to humans. The birders who have seen the hummers up close describe it to resemble a straw or a needle.

While most of us generally use the term “beak” to refer to it, experts prefer the term “bill” instead. This term is also used to describe the beaks of other birds, both large and small. You might even have come across the term “maxilla,” which is the official name for the upper part of their beak.

How do hummingbirds use their tongue and beak?

Hummingbirds drink nectar with their tongues; the tiny fork located at their tip opens up to collect nectar and all other fluids. As their bill closes, their tongue retracts, compressing the tongue and allowing the hummers to drink the nectar. This high-speed lap is repeated 15 to 20 times per second. Imagine the speed of the whole process!

When you examine the intricate details of a hummingbird’s beak, it quickly becomes clear that this bird has an almost perfect natural design. This design enables hummingbirds to use their beaks to their full potential to reach nectar from the far back of the flowers on which they feed.

In addition to the design, the hummer’s tongue is also covered in hair. Wondering why? Well, it is in order to help them get as much nectar as possible each time they feed.

As a result, when hummingbirds use their beaks, they will stick their tongue into the flower and draw nectar up through their two troughs. This isn’t a sucking motion, as you might expect, but rather a method of drawing the nectar in.

The experts use the term “Capillary Action” to describe this method. As the nectar slides down the bird’s throat, it will retract its tongue and draw the nectar back up into its mouth. The capillary action process is then repeated until the tubes are full.

What do hummingbirds use their beak for?

The shape of a hummingbird’s beak has a controlled elastic snap that allows it to trap flying insects in a fraction of a second, with greater speed and power than jaw muscles alone could achieve.

As most of you might already know, hummingbirds’ beaks are designed to feed on flowers. However, these birds cannot survive solely on nectar. They must consume small insects to obtain sufficient protein and nutrients required for their nutrition.

Can hummingbirds break their beak easily?

Another aspect of hummingbirds that many people are interested in is their beautiful beak structure. Some people believe that a hummingbird’s beak is easily breakable because it appears so delicate in its make-up.

The length of their beak distinguishes them from most other bird beaks. It becomes even more noticeable when comparing their beak length in proportion to their overall body size.

Unfortunately, as adaptable and flexible as a hummingbird’s beak appears to be, it is quite easily damaged or broken. There are two major causes of this damage:

Because of some poorly designed feeders, a hummingbird is frequently caught when another hummingbird tries to attack them. As a result, they damage their beaks by attempting to exit the feeder too quickly.

Do hummingbirds feed with their beak closed? Why?

Although it might appear that hummingbirds are sipping their food, they’re actually sticking their tongue into the nectar and drawing it up. This means that when they feed, their beaks are closed, allowing them to complete the task successfully.

Contrary to the other birds, the hummers do not feed with their beaks. Instead, they feed with the two troughs, which are grooves at the tip of their tongue. In fact, depending on beak and tongue length, they can even extend and then retract their tongue. This is typically done about 3-13 times in a single second, all without opening their beak.

When do hummingbirds open their beak?

In the last section, we learned how the amazing hummers could feed without even opening their beak. But does this mean that these birds have never opened their beaks in their entire lives? Let’s find out.

When a hummingbird is attempting to catch insects in flight, they will open their beaks. They do it by bending their jaw downwards, causing their beak to gape open slightly in preparation for this action.

Conclusion: Can hummingbirds open their beak?

The most frequently asked question about a hummingbird’s beak is whether it can be opened or not. Although it might appear strange at first when viewing hummingbirds from a distance, their long needle-like beak never appears to open, nor does it seem to be capable of doing so.

It is especially noticeable if you have been able to closely observe a hummingbird feeding at one of your local bird stations. The next time you see a hummer there, observe how they can feed without ever opening their beak.

But just because hummers don’t open their beak while feeding doesn’t mean they’ll never open it all. The most common and perhaps singular instance for them to open their beak is while catching insects.

Do Hummingbirds Eat At Night?