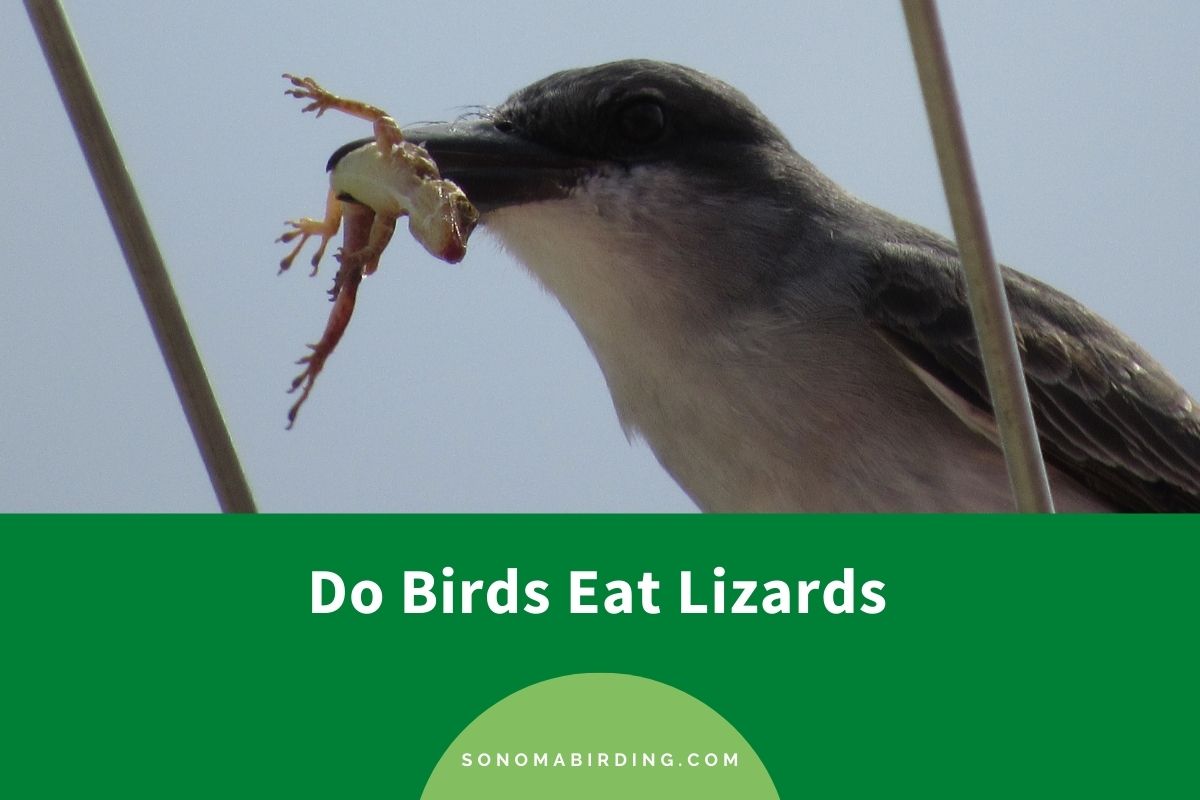 Lizards are known for being the smallest as well as most harmless reptile species in the world. However, some lizard species are still considered a pest as they take over our homes.

Have you ever looked at a lizard and wondered if any of its predators are from the avian world?

Do birds eat lizards? Yes, they do. While lizards rarely constitute the primary diet of any bird, most birds, ranging from the medium-sized passerines to the raptors and the shorebirds, are seen feeding on them frequently.

If you have been wondering about which bird preys on these little reptiles, you’ve come to the right place.

Stay with us until the end of this article to learn more about the birds that enjoy having lizards for their meal.

Have you ever noticed a lizard dashing away in a sheltered place as it sees an owl flying overhead? Well, it was no mere coincidence.

The family of owls consists of various reptile predators that lizards are afraid of. Are you curious which owl species hunt them most actively? We’ll tell you.

As you already know, the owl family is divided into two parts: the Barn Owls and the True Owls.

The barn owl family members aren’t keen on hunting lizards or any reptile in general and will only go after them occasionally. It is in the True Owl family that most of the lizard-eating owls reside.

Screech owls are a group of 21 owls that are recognized by their loud, screeching calls. Because these owls primarily hunt in semi-open areas, reptiles are a major food source for them. Among the lizards, they feed on skinks, anoles, geckos, and swifts.

Known as the smallest and lightest owl species worldwide, the Elf Owls (Micrathene Whitneyi) are about as large as a sparrow and mainly feed on insects. However, in some cases, they have also been spotted eating lizards, particularly the spiny lizards.

Burrowing Owls (Athene cunicularia) are a moderately-sized, long-legged species commonly found in grasslands, deserts, and other open areas of the North and South Americas.

Although these opportunistic feeders mostly eat insects and rodents, lizards are also a part of their diet. Among lizards, the Tropical House Geckos (Hemidactylus Mabouia) are most preferred by them.

The Pygmy Owls are a group of 29 species of small owls with a wide distribution in the world.

Although these owls commonly feed on insects, lizards are a major part of their diet, too. In fact, lizards are the only reptiles they eat. Among the most preferred lizards are Skinks, Fence Lizards, Alligator Lizards, and Whiptail Lizards.

Other birds that eat lizards

So far, we’ve learned about different owls that feed on lizards, both regularly and occasionally. But are owls the only birds that eat lizards? Not really.

Below, we’ve made a list of 13 of their most common avian predators, other than the owls. Take a look:

Golden Eagles are a large raptor species that can be found throughout the northern hemisphere.

These birds have light golden-brown plumage on their napes with an overall dark brown body, just as their name suggests.

Their bill is dark-tipped, getting lighter towards the base, coupled with a yellow cere. The feet of these birds have thickly feathered tarsi with bare, yellow feet.

The adult Golden Eagles display sexual dimorphism only in size. Both sexes appear identical; only the females are larger than their male counterparts.

Named after the rufous, brick-red tail, the Red-Tailed Hawks are falcons found everywhere in North America. They’re also referred to as “Chickenhawk” and “Red-tail.”

Red-tailed Hawks have over 14 subspecies, all of them varying in their plumage coloration. However, most subspecies have a dark brown head and neck with lighter underparts. They all have a short, dark bill, with yellow legs, feet, cere, and irises.

Both sexes of the adult Red-tailed Hawks look identical, with the females being heavier than their male counterparts.

The Swallow-Tailed Kites are the monotypic member of the Elanoides genus and are mostly found in the southeastern region of the United States.

These raptors are named after their elongated, deeply-forked tail, which is characteristic of the swallows.

Swallow-tailed Kites have an overall black and white body, with their head, underparts, and primary flight feathers being white.

On the other hand, their back, upper wings, and tail are all black. These birds aren’t sexually dimorphic; both sexes appear identical.

Declared as the national bird of the United States of America, the Bald Eagles are an eagle species endemic to North America.

Like the African Fish Eagle in appearance, the Bald Eagles also have a brown body with a white head and tail; only they have a white chest with a black tip to their bill. These raptors display sexual dimorphism in size, with the females are larger than the males.

Popularly known as “African pygmy Falcon,” the Pygmy Falcons are a raptor species endemic to Eastern and Southern Africa.

These birds have a white face and underparts with a grey head, back, wings, and a black tail. The females can be distinguished from the males by a chest patch on their back. In terms of size, both sexes are the same.

Being the smallest and most common falcon of North America, the American Kestrels are medium-sized birds known as “Sparrow Hawk.” Their weight varies approximately from that of a blue jay to a mourning dove.

American Kestrels display sexual dimorphism in both size and plumage, with the females being slightly larger than their male counterparts.

Both sexes have a rufous-colored back, with paler undersides streaked with brown. On their heads and wings, you can see patches of grey.

Previously known as “Bay-Winged Hawk” or “Dusky Hawk,” Harris’s Hawks are medium-sized raptors commonly found in the southwestern regions of the United States.

Contrary to popular belief, these raptors hunt in a pack. Owing to this social behavior, they’re considered intelligent.

Harris’s Hawks display sexual dimorphism in size and not in plumage, with females slightly larger than their male counterparts. They have a chestnut-colored body with dark-brown feathers. Their legs and cere are yellow, with a white-colored base and tip of their tail.

The Black Kites are a raptor species known for having the most widespread distribution of all the members of Accipitridae.

The only black parts of these birds’ bodies are their outer flight feathers, bill, and claws, all of which are difficult to see when perched at a distance. The rest of their body is covered in shades of brown, with the underparts being lightly colored than the upperparts.

Both sexes of the adult Black Kites appear similar in plumage, but the females are larger in size and are more aggressive.

Popularly known as the “Laughing Jackass” in the 19th century, the Laughing Kookaburras are a fairly large kingfisher species belonging to the subfamily of Wood or Tree Kingfishers.

These birds have a large heads with brown eyes and a brownish stripe just below them. Their underbody is covered in cream color, while the back, wings, and tail are dark brown, with a touch of brick red on the tail. On their shoulders, you can notice a pale blue patch.

The adult Laughing Kookaburras are sexually dimorphic to some extent. The females are larger in size than their male counterparts and have paler shoulder patches than them.

Commonly referred to as the “Butcherbird” due to their carnivorous diet, the Loggerhead Shrikes are a medium-sized passerine bird endemic to North America.

These birds have a head that is significantly larger in comparison to the rest of their bodies, which is why they’re called “loggerheads.” The adults display negligible sexual dimorphism that is difficult to identify from a fair distance.

Loggerhead Shrikes have a grey head and back, with their wings and tail etched with black. The underside of their body is covered in a paler shade of grey. On their eyes, they have a prominent, black eye mask. Occasional white bars can be seen on their feathers.

Lifespan: about 10 years in the wild
Length: 32-42 centimeters (13-17 inches)
Wingspan: 76-91 centimeters (30-36 inches)
Mass: 150-290 grams
Diet: it primarily feeds on crabs, shrimps, spiders, lizards, other reptiles and amphibians, and insects found inside or on the surface of the water.

The Gull-billed Terns are a large tern species found in southern Europe, eastern Asia, and North and South Americas.

As their name suggests, these terns have a thick bill that appears more like a gull than a tern. It is an important factor in setting them apart from the other tern species.

Like most other tern species, the Gull-billed Terns also lack sexual dimorphism. Both sexes have a black cap on their heads, along with black bills and legs. The rest of their body is mostly white, except for greyish wings and tails.

Being the largest members of the egret group globally, the Great Egrets are large, white shorebirds that have a widespread distribution in the Americas, Africa, Southern Europe, and Asia.

As we’ve already mentioned, these birds have an all-white plumage. They have a small head with a large, yellow bill, which is a common differentiating factor between them and the Great Blue Herons.

Their legs and feet are darker, almost blackish, but in the breeding season, the bills turn darker and the legs lighter. Great Egrets are not sexually dimorphic; the adults of both sexes appear identical.

Found throughout the open water and wetland shores of Central and North America, the Great Blue Herons are the third-largest member of the Ardeidae worldwide.

These birds have yellow bills, greyish legs, and primarily white bodies. Their throat has blackish streaks, with slate-colored plumes running behind their head.

Apart from their head, these birds also have plumes on their lower neck and their lower back, although the latter appears only in the breeding season.

Their flight feathers are slaty with a touch of azure blue. Great Blue Herons display minimal sexual dimorphism, with both sexes having a similar appearance and the males being slightly larger in size.

Are lizards scared of birds?

Considering the fact that lizards have many lethal enemies in the avian world, it is natural for them to be scared of birds. The most popular example of it is how effectively bird feathers can scare the house lizards away.

Using bird feathers to get rid of lizards is an ancient practice in many cultures, but due to its efficiency, it is still adopted by many people around the world.

When a lizard finds a bird feather lying around in your house, it will trick them into believing that there’s a bird nearby, which threatens them. Therefore, they will scurry out of your house in no time, running for their lives.

Returning to our initial question: do birds eat lizards? Yes, they do. Birds are collectively a major contributor in controlling the population growth of these little reptiles. Among the birds, the owls are the primary predators of lizards. In the article, we have talked about all the common birds that prey on lizards.