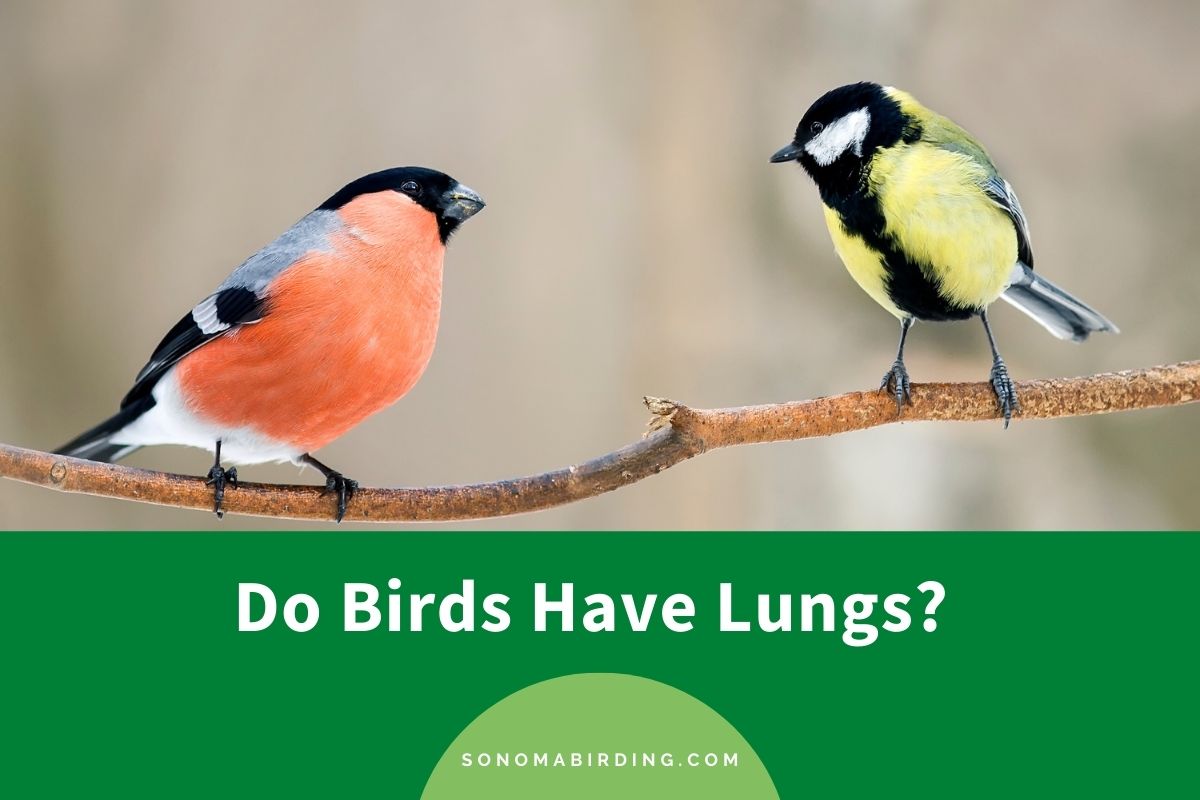 All living creatures, be it humans, animals, or birds, need to breathe in oxygen and breathe out carbon dioxide continually without stopping for as long as we’re alive. The process of breathing is vital for the survival of us all. But have you ever wondered whether birds breathe the same way as we do?

Do birds have lungs? Yes, they do. The lungs that birds possess are not just smaller than that of humans or other animals but also function very differently. They have a unidirectional respiratory system that helps them to breathe faster and store more oxygen in their bodies, which they might need when they fly higher in the sky. The only disadvantage of their sensitive respiratory system is that they’re more vulnerable to respiratory diseases and infections.

In this article, we aim to explore the functioning of birds’ respiratory system in-depth and learn about how it is different from our own.

Contents show
Are the avian lungs similar to our lungs? Why or why not?
The function of air sacs in birds’ respiratory system
Functioning of birds’ respiratory cycle: explained
Do birds have better lungs than humans? Why?
Respiratory issues among birds
Related Articles

Are the avian lungs similar to our lungs? Why or why not?

Just like humans, the birds also possess a pair of lungs where the process of gas exchange takes place along with several air sacs attached to it that help the oxygenated air move through their bodies. But that’s where all the similarities between the avian and mammalian respiratory systems end.

As you can imagine, the lungs of birds are much smaller than the ones we possess due to their overall smaller size. Additionally, while we have over 300 million air sacs (or alveoli) inside our lungs, birds have only 7-9, depending on the species. About 3-4 of these sacs are paired with a single unpaired one.

Moreover, these sacs aren’t necessarily contained within their lungs. They can extend up to their femur, humerus (a bone placed between their shoulders and elbow), vertebrae, and at times even into their skull.

The function of air sacs in birds’ respiratory system

In the mammalian respiratory system, the air sacs have the central responsibility of gas exchange. For this reason, these sacs are invaluable to us. But do the birds’ air sacs serve the same purpose? Not really.

Birds’ air sacs have nothing to do with the exchange of oxygen and carbon dioxide in their body. Instead, these sacs are responsible for the one-directional movement of air through their respiratory system.

Did you know the function of the diaphragm in our respiratory system? The muscles of our diaphragm contract and expand as we breathe in and out, respectively. This movement creates a vacuum in our chest, allowing our lungs to expand when we take in air, and contract when we release it.

Because birds don’t possess a diaphragm like us, the air sacs in their bodies create pressure to allow the movement of air inside and out of their lungs.

Let’s walk you through a complete respiratory cycle in birds to better understand how they breathe.

Just like us, the birds also inhale air from their environment through their nostrils, which are two little holes present right above their beak, known as “nares.” This inhaled air then passes through their trachea, a long, tubular structure that is branched out into left and right bronchi. These bronchi are connected to each of their lungs.

However, not all the inhaled air is sent to their lungs at once. Some of it enters their lungs, while the remaining is stored in the air sacs located at the posterior.

The birds undergo two whole inhalations before exhaling the air they intake. In the first inhalation, the air that has entered their lungs undergoes gas exchange. The spent air then leaves their lungs through the trachea.

In the second inhalation, more fresh air enters the lungs, and the spent air is stored in the air sacs at the anterior of their lungs. This air is released from the body after the gas exchange, with the final exhalation.

Do birds have better lungs than humans? Why?

Did you know that the respiratory organs of birds take up over 20% of their body volume, while in humans, they occupy only 5% volume?

While it might come as a surprise to many, birds need to get oxygen from the air much more efficiently than mammalian lungs. Are you wondering why that is? It is because their cells also require much more oxygen than us.

Birds are flying creatures, and the process of flight requires a lot of energy. More energy means more oxygen, which is why the oxygen demand in their body is more. In fact, when these birds fly high in the sky where there is lesser oxygen, the extra oxygen stored in their lungs helps them breathe easily.

Additionally, birds also breathe much faster than humans. While an average human adult breathes about 12-20 times in a minute, birds breathe over 25-40 times. In fact, a canary can even take up to 100 breaths in a minute!

While the avian respiratory system enables birds to breathe more efficiently, it is also more vulnerable to a number of diseases and infections. Here are some of the common instances that can make birds sick:

If you’re a pet parent to birds, you must take notes of these pointers to make sure your pets are safe from any of these problems.

Conclusion: Do birds have lungs?

With this, we come to the end of our article. Today, we have learned that while birds possess a pair of lungs but their respiratory system functions differently from ours.

Unlike the air sacs that are contained inside our lungs, birds have air sacs that can extend into their skull, vertebrae, and other bones of their bodies. These air sacs help in the efficient movement of air inside their organs; they also make the birds more sensitive to any kind of fume, spores, or dust in their surroundings.

If you’re a pet parent to birds, it means that you need to be very careful about the cleanliness of yourself and your house. Moreover, you should also ensure that they’re getting access to plenty of fresh-flowing air.

Do Birds Sweat? How Do They Keep Themselves Cool?