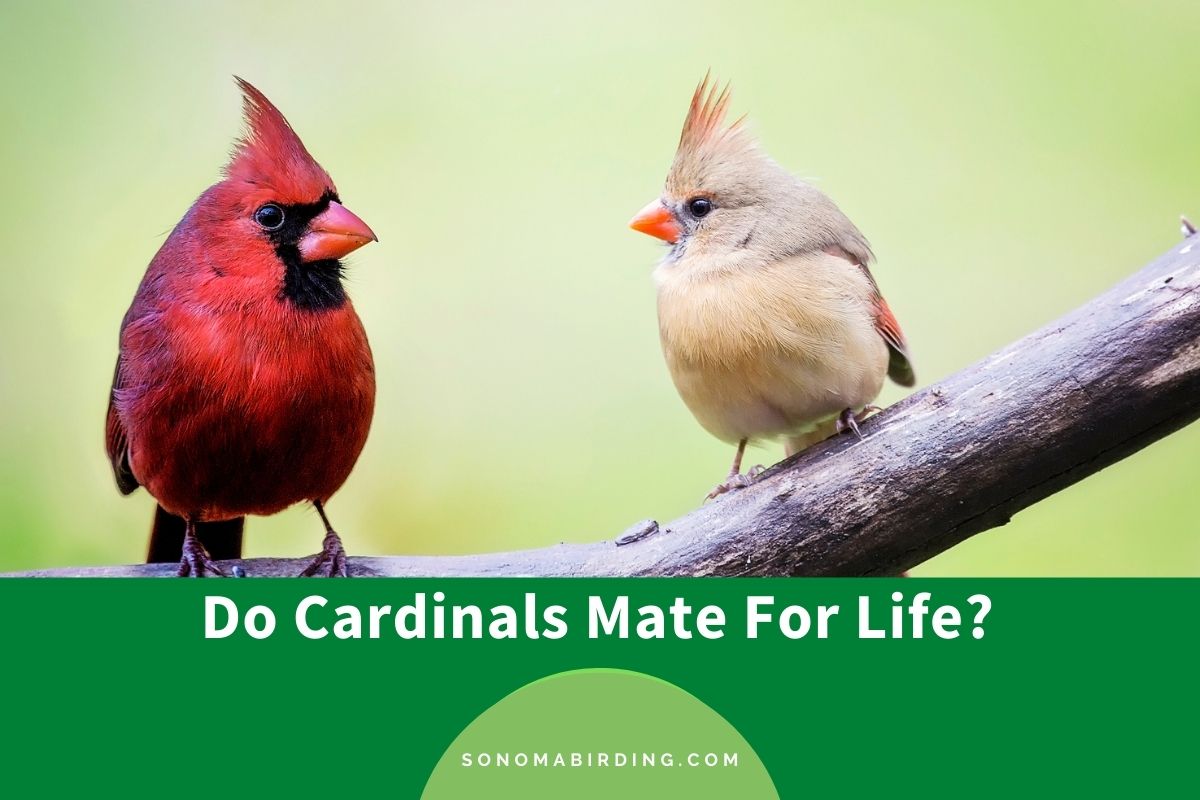 The tradition of being with the same partner forever, which was once very prevalent among the human race, is becoming less common these days due to divorces, cheating, and polygamy. However, just because this practice is losing its stronghold in our community doesn’t mean it has become extinct among the birds as well.

The list of bird species that mate for life stretch long, including swans, eagles, geese, vultures, and many others. Can we include the bright little cardinals in this list as well? Let’s find out.

Do cardinals mate for life? Not strictly. While monogamy is generally practiced among cardinals, it is not strictly adhered to by all the cardinals. While some of these songbirds mate for life, there are others that seek new mates every breeding season due to some reasons. The death of their mate or unsuccessful breeding in the past are strong reasons to motivate them towards seeking a new mate.

This article will explore all aspects of cardinals’ mating behavior, including their sexual maturity, mate-seeking rituals, breeding and nesting processes, and more.

When do cardinals reach their sexual maturity?

Studies have shown that the average lifespan of the cardinals is up to 3 years in the wild. However, this is mostly because these birdies end up becoming prey to larger predatory birds before they reach the prime of their lives.

Some lucky cardinals have a much longer lifespan, ranging between 13 and 15 years. In fact, in captivity, these resilient birds are known to live as long as 28 ½ years.

You might be wondering if cardinals even get to reproduce before their predators in the wild gobble them up. Both male and female cardinals reach their sexual maturity when they’re one year old. In fact, their early sexual maturity is the sole reason behind their abundant population despite active predation.

Once they become sexually mature, cardinals seem to live their life to the fullest. These songbirds often breed 2-3 times in a year, between the months of March and September. They prefer early spring the most for mating. The gradual warmth in temperature and blooming flowers mark for the cardinals the beginning of their breeding season.

Fun fact: The cardinals, both males and females, are known to produce some of the best songs in their breeding season.

How do cardinals choose their partner?

Cardinals choose their partners at the very beginning of the mating season. The process of selecting partners is both fun and exciting. As with many other birds, the males have the job of wooing a female partner for themselves. In order to do this, they put forward several performances, all of which are a part of courtship rituals.

Singing is a significant part of these rituals. Although the female cardinals can produce songs that are much more elaborate than the males, when it comes to wooing, the males will often sing. Their song performances are made in order to attract a mate.

Another adorable gesture that is involved in the courtship ritual is feeding. In this gesture, the males find a seed, pick it up in their beak, and fly close to their prospective female partner, and two touch beaks so that the female can take the seed. This sweet mate-feeding gesture is also popularly called the “cardinal kiss”.

The female cardinals are pickier than the males when it comes to choosing a partner. They often seek the most attractive male available, choosing them by their ornamentation. The vibrance of their plumage, the color of their beak, and the size of their black face mask are some of the factors upon which their choice depends.

Fun fact: The size of a cardinal’s face mask says a lot about their personality. If a female cardinal has a big face mask, it means that they can defend their nests quite skilfully. Also, a male’s big face mask is a sign that they’re good at reproduction.

How do cardinals mate?

Once the female cardinal chooses a male partner for itself and a bond is formed, the new couple spends some quality time together. After a day or two, these birds are ready to mate.

As you can imagine, the mating process of cardinals (and all other birds) is very different from ours. They don’t possess distinct and developed sexual organs like us. In fact, both males and females have a single opening in their body, called “cloaca” or “vent”, which is used for the urinary and excretory releases, mating, and egg-laying.

While mating, both birds rub their cloacal openings together until sperm is transferred from the male’s body into the female’s. This sperm reaches the reproductive tract of the females, where the ovum is fertilized.

What happens after mating?

After mating, comes the process of incubation, which usually lasts about 11 to 13 days. It is during this time that the cardinals begin to build their nest, where they will later lay their eggs. If a female is building her nest all by themselves, it will take them about nine days.

However, the males usually help them with it, and together it takes the couple 3 to 4 days to do it. During the incubation period, males also take up the responsibility of bringing food for their mates.

Cardinal’s nests are made of bark strips and twigs, with a lining of grasses and plant fibers. These nests are shaped like shallow cups and are usually located in a well-concealed spot to protect their eggs from predators like other birds and snakes.

Female cardinals usually lay 2 to 3 eggs at a time. In some rare cases, they lay four eggs too. After the eggs have been hatched, the couple feeds their hatchlings and takes care of them for 9-10 days. By the time they’re ten days old, the baby cardinals have learned to fly and leave their nest.

Even after they have left the nest, their male parent brings them insects to eat for the next three weeks, helping them learn to survive on their own. All this while, the females prepare themselves for the next brood.

Fun fact: Both male and female cardinals are attentive parents. The male goes out to hunt for food while the female takes care of the babies. Whenever the female needs to leave the nest, it produces a unique gurgling sound, signaling the male to take over the nest duties until she returns.

Do cardinals mate for life?

Although most cardinals do mate for life, the same cannot be said for all the cardinals. Once the mating season ends, these songbirds part their ways to migrate toward the south in the wintering flocks.

When they return home the following years, most cardinals reunite with their mates and breed, while some of them seek out new partners for mating. There can be various reasons involved in changing partners, the death of their mate being the most common one of them.

Some couples also avoid coming back together due to unsuccessful breeding in the past. In other words, if a couple’s eggs do not hatch, or their babies become victims of predation, both of them blame each other for it. Under such circumstances, the decision not to reunite the next season is taken by them mutually.

Can the cardinals be aggressive?

Although cardinals are not known for being aggressive birds in general, they are highly territorial. In the process of defending their territory from another male, the male cardinal can behave aggressively.

Do cardinals raise the babies of other birds?

Yes, but not intentionally. Sometimes, cowbirds lay their eggs in the nest of the cardinals. And due to the similarity between the eggs, cardinal parents are confused and end up tending for the cowbird hatchlings as well.

Can cardinals be kept as pets?

No, it is illegal to harm, kill, or keep cardinals as pets. However, if you want to enjoy the company of these vibrant birds, you can set up feeders for them in your backyard.

Conclusion: Do cardinals mate for life?

Named after the Catholic bishops, cardinals are little songbirds known for their vibrant plumage and melodious voice. These sweet birds have many qualities, but monogamy not necessarily one of them.

Some cardinals have been seen in monogamous relationships, spending their entire lifetime with the same partner. However, the population of cardinals that seek out new mates every season is equally significant.

If a cardinal couple fails to bring up their hatchlings safely, both parents mutually agree to end their relationship and look for new mates in the coming season. The death of their former partner is also an essential factor in polygamy.