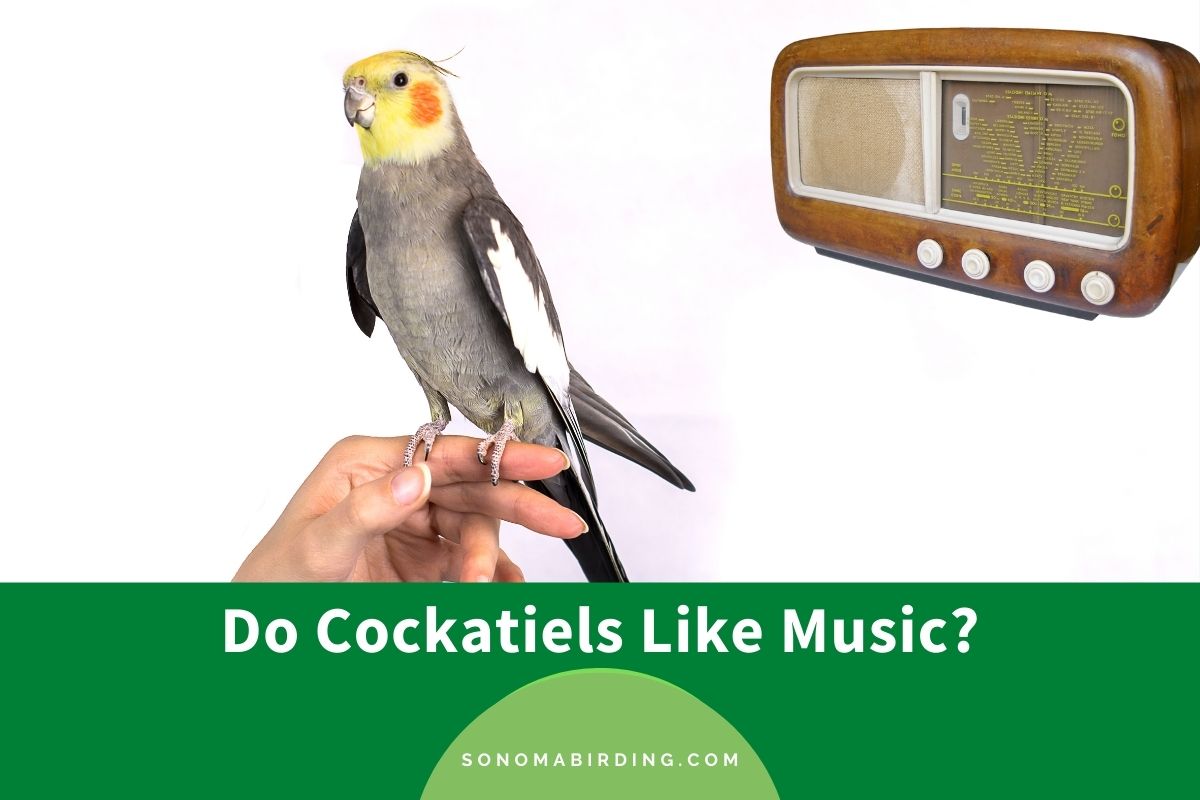 Cockatiels are known to be extremely intelligent for birds and have even been known to mimic certain sounds. But do they like music? While it can be quite enjoyable to watch them bob their heads to the music, or listen to their variety of musical songs, there is debate over whether they actually enjoy it as we do. Let’s find out.

Do cockatiels like music? Yes, cockatiels actually enjoy music. Like most parrot species, the cockatiels are also quite fond of music. Since these birds have an individual taste in music, finding their kind of music might take time. But once you’ve found it, you will find them enjoying it immensely, trying to mimic the lyrics and bobbing their heads to the beats.

In this article, we will talk about everything you need to know before introducing music to your cockatiels. This post will cover the scientific studies involved with cockatiels as well as my own personal experience that I’ve had with my cockatiel reacting to the music.

Just like laughter, music is also considered to be one of the best medicines in the world. It can lower our stress levels, reduce our anxiety, regulate our emotions, and make us feel relaxed and happy.

But why do cockatiels like music? Well, although these little birdies lack the complex neurological structure that we possess, they do have alpha-synuclein (a protein) in their body. This protein releases dopamine, the happy hormone, in the cockatiels whenever they listen to a melody. And since listening to music makes them happy and relaxed, it’s obvious that they would like it.

Fun Fact: Cockatiels are not the only birds that have alpha-synuclein. All the other members of the parrot family, as well as the songbirds also possess this protein in their bodies.

In the previous section, we learned that music leads to the cockatiels’ dopamine release, which is why they like it. But have you wondered whether all kinds of music can trigger their happy hormones in the same way? Or do these birdies have a specific taste in music? That’s what we are going to talk about in this section.

Several studies conducted on the parrots have claimed that these birds can be quite picky about the kind of music they like. Cockatiels, belonging to the parrot family, have similar tendencies. And while their taste in music can vary individually, the following are the kinds of music they are known to enjoy:

The sound of Nature

When the cockatiels live in the wild, they’re surrounded by natural sounds and can, thus, connect to them deeply. These sounds could be of the other birds or crickets chirping, slow breeze blowing, the leaves of the trees rustling, the sound of flowing water, and so on.

When you play these sounds for your feathered pets, they will instinctively feel at home. Being surrounded by the sounds of their natural environment is, in fact, a great way of making a newly-adopted cockatiel feel safe in your house.

The light and melodious tunes of classical music are bound to appeal to your cockatiels just like it appeals to you. Its smooth texture is pleasing to all ears, be it yours or your feathered pets’.

Don’t be surprised if your cockatiel has a bolder taste in music and enjoys the pop music playing on your radio more than other soothing music you play for them. Many cockatiels have been seen responding more actively to it, bobbing their heads vigorously and grooving at its beats.

Other genres of music

Apart from these, country or rap music could interest your feathered pets as well. You can keep experimenting with all genres unless you figure out which one they enjoy the most.

How would you know whether cockatiels like music or not?

Are you worried that you might not be able to tell whether your feathered pets are enjoying the music you put on for them? Well, you shouldn’t be. Like most other parrots, Cockatiels are highly expressive and always find a way to convey their feelings to their owners; music is no different. Following are some of the obvious signs you will notice in them when they listen to music:

Signs that indicate the cockatiels like the music you play

Chirping is the first sign of joy and pleasure that you should look for in the cockatiels. These birds will chirp in the morning if they’ve had a good night’s sleep; many pet parents often find them chirping right after they’ve eaten their food. So, if they’re chirping to the music you have played them, that’s good news.

Trying to mimic the lyrics of the song

Since cockatiels possess the ability to learn to talk, like all parrots, it is natural for them to mimic the lyrics of a song they enjoy. However, if you have a female cockatiel, don’t be discouraged if you don’t find them mimicking. It is because the male cockatiels are usually the ones that can learn to talk. The females are not usually very good at it.

Cockatiels fluff out their feathers when they are excited about something. If they’re doing it while listening to music, it is a good sign. Sometimes, you will also notice them fluffing out their cheek feathers over their beak, which is an indication that they’re content with your choice of music and highly approve of it.

Clicking of tongue and grinding their beak

Most pet parents seem to think that grinding and tongue-clicking are signs of annoyance. But that’s not true. Unlike us, the cockatiels tend to do these things neutrally. And if they’re doing it while listening to music, it means that they’re enjoying it immensely.

Cockatiels usually bob their head up and down when they’re asking for food. But if they’re doing it while listening to music, it indicates their enthusiasm about it and cements the fact they’re having a good time.

Screaming is a classic attention-seeking gesture of the cockatiels. When these birds let out a shrill, high-pitched screech, it means that they might be feeling negative emotions of anger, sadness, fear, or loneliness. And as screeching is a negative behavior, if they’re doing it when you play them something, they are clearly not enjoying it.

If you’ve ever seen cockatiels hissing, you might have noticed that they pull back their crest while doing so. Since their flattened crest also indicates a negative emotion, it is not a good sign when they do it while listening to music. It could mean that the song you’ve played is making them feel angry, distressed, or irritated.

Just like hissing, howling is also an expression of distress for the cockatiels. Whenever they are howling at something, it indicates that they want that thing to be removed from their vicinity. If you find them howling at your music, stop playing it at once.

Although trembling is a normal cockatiel behavior, it can also be a sign of stress. If you’ve had these birdies for a while, you will easily be able to distinguish between the trembles that are okay and the ones that aren’t. Seeing them trembling in a not-okay way when you’re playing a song indicates that you should probably change it.

The benefits of music for cockatiels

We can agree that it might take a while to figure out the songs and music your pet birdies enjoy. But once you’re past that phase and know which songs are their favorite, you can see how music can have a positive influence on their personality:

• Music can instantly put these birdies in a good mood. So, if they seem low and you play them their favorite song, you will notice them cheering up in no time.
• If you’re busy and cannot spend time with your feathered pets, playing music for them will save them from boredom and loneliness. It will be something they can use to entertain themselves until you are ready to shower them with your love and attention again.
• Once the cockatiels have gotten used to listening to music, you will notice a slight decrease in their attention-demanding behavior.
• When you hum to the songs that your cockatiels enjoy, it creates a special bond between you two, bringing them closer to you.
• When the cockatiels are listening to more songs, they’re more likely to pick up words from them and can eventually learn to sing along as well. It can also help them in learning how to talk.

Can cockatiels dance to music?

You’d be surprised to know that singing is not the only talent your feathered pets can master. These birds are also quite good at dancing. And since dancing also happens to be an excellent form of physical exercise, it’s all the more beneficial for them.

Teaching your cockatiel to dance to music

Did you know that dancing might not naturally come to all cockatiels? While some individuals can figure out their own groove, others might need your help in doing that. Following are some tricks and tips you can use to teach how to dance to your feathered pets:

• First and foremost, you must play the songs they like. If they do not enjoy the music, they’re very unlikely to dance to it.
• Cockatiels love sharing their experiences with their pet parents. So, if you start dancing to their favorite songs in front of them, they are likely to follow your lead. However, when you do that, make sure you’re doing simple movements that are easy for them to follow. Additionally, vocal encouragements also go a long way for these birdies.
• You can also try showing your pets videos of other dancing cockatiels. It will not only get them intrigued but will also make them want to mimic the movements of the birds in the videos.

Although cockatiels are not the best singers in the avian world, they can certainly appreciate music. Music often has a calming effect on these birdies and can even lift up their mood. In fact, it is also a great way to keep them entertained when you’re running busy and lack the time to engage with them.

While figuring out which songs your pets like can be a long process, once you have created a list of their favorites, playing it can positively impact their temperament and personality.

However, you shouldn’t use music to avoid mingling with them. As pets, they deserve your time and attention and denying them that is not healthy for their mental well-being.