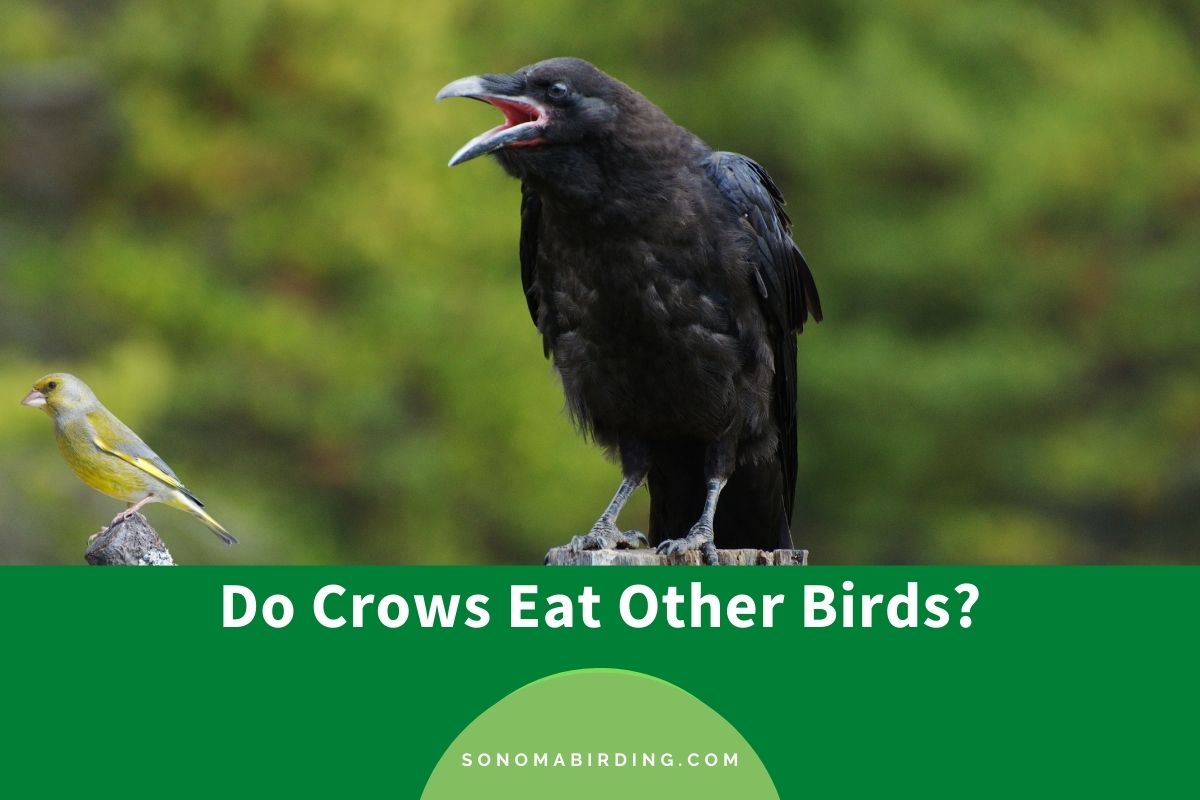 Which black-colored bird can you find in almost every part of the world? You’re right; it’s a crow. These mysterious birds are practically everywhere you look. They’re scavengers, having the most diverse diet, which is probably how they can survive anywhere. They can eat anything including mice, rats, frogs, and eggs. But what about other birds? Can they eat them too? Well, let’s find out.

Do crows eat other birds? Yes, crows are often found eating other birds. Any bird that is either smaller than them in size or is defenseless in front of them can potentially be their victim. Although crows usually kill and eat birds like canaries, finches, pigeons, sparrows, and doves, you might find them trying to hunt down chickens as well, particularly when they’re in flocks. However, their most common targets are the eggs and nestlings of other birds.

In this article, we will explore the eating habits of crows. We’ll talk about the birds they generally prey on, discuss how they hunt for baby birds, and recommend some ways in which you can protect nestlings from them.

Which birds do crows commonly prey on?

As we have already mentioned in the last sections, crows are both omnivores as well as scavengers, and they can eat nearly anything, both alive and dead. Small animals such as mammals, rodents, reptiles, amphibians, birds, their eggs, and carrion make up most of their diet.

Have you ever wondered which birds often end up becoming prey to these cawing predators? Well, you cannot expect them to prey on birds that are much larger and stronger than themselves, such as eagles, hawks, owls, and other birds of prey.

Crows might fight birds as large as themselves or slightly larger when they have to. But if they were to choose an ideal avian prey for themselves, they will usually go after smaller birds that are defenseless and will not fight back. Some of their common prey birds are finches, sparrows, and canaries.

When they have newly become parents, most birds are protective of their younger ones and look after them to the best of their abilities. In some species, both male and female parents take turns to watch their babies while the other one is away, making sure no harm comes to them.

Do you wonder why these adults are so concerned about the welfare of the nestlings? Because they’re far too young to be able to look after themselves, which makes them vulnerable to a diverse range of predators.

Are crows one of the predators the bird parents need to worry about? Absolutely. Crows are one of the most opportunistic birds. Nestlings and baby birds are ideal targets for the crows since they cannot fight back. In fact, crows can be quite persistent and crafty when hunting nestlings. Let’s find out how:

How do crows hunt the nestlings?

Once a crow has spotted a nest full of nestlings, it finds a well-concealed spot close by and perches there, keeping an eye on it. The concealed spot is often a branch of a neighboring dense tree or shrub, from where he can observe the nest undetected.

The crow is now waiting for the parent birds to leave, and they will have to, at some point, bring their babies food. When they do, the crow will swoop in, pick up the nestlings and take them to a safe spot where it can eat them in peace. At times, when the crow is in a hurry, they might gobble them up then and there.

From what we have read above, crows are quite skillful hunters. While the small wild birds and their younger ones are their common victims, what about the domestic birds? Can crows come after them as well? That’s what we intend to find out in this section.

Although chickens are not the kind of birds crows usually go after, it should not be surprising if a hungry crow looks at chickens as a meal. However, as far as chickens are concerned, you must wonder if crows are really capable of hunting these poultry birds.

Chickens are about as big as a medium-sized crow. Crows do not possess any powerful tool like the raptors. So, how do crows manage to hunt chickens? By using the only tool they have at their disposal: intelligence.

When they’re planning to hunt a chicken, crows always form flocks or at least pairs. They hover around the chicken, pecking it constantly until it is worn out, and then pick it up together, taking them to a safe spot where they can devour it together.

However, there are two ways in which the crows’ hunt of chicken can go down; at times, the chickens can also attack their predators using their sharp claws and beaks. That’s why crows usually go after baby chicks or younger chickens, not the fully-grown adults.

Although ducks are easier targets for the crows than chickens, the instances of crows hunting or eating a living adult duck are highly unheard of. It is probably because these waterfowls are simply too heavy for the crows to fly away with. However, crows often go after their eggs and even little ducklings.

Have you ever heard of a crow hunting or killing a parrot? Most of you probably haven’t. These birds rarely have anything to do with each other. Even if a crow wanted to hunt on a fully-grown parakeet, it would be a very difficult task for them, even more so if alone.

Parakeets are fast fliers just like them and have sharp beaks, which means that they are equally likely to get hurt in the process. For these reasons, crows usually leave parakeets alone but might go after their eggs and fledglings if such an opportunity presents itself.

Pigeons or doves might be as big as crows in size, but both these birds are herbivores and have a rather docile and peaceful temperament. In other words, they can offer more meat than smaller birds and pose no threat to the crows.

However, the strength of pigeons and doves lies in the numbers. These birds always stay in flocks precisely to ward off all predators, including crows. A crow will only kill and eat a pigeon or a dove if it can find them alone. They might be opportunistic, but they’re also intelligent and know when they should back off.

While there are several ifs and buts involved with crows eating living birds, when a dead bird is concerned, the answer is downright yes. Crows are one of the most famous scavengers in the world and would never turn down an opportunity to eat carrion, whether it is of a mammal or a bird.

How can you protect baby birds from crows?

Do you happen to have a nest full of fledglings in your yard that you want to protect from crows? Well, the task might not be easy since most things that keep crows away might also deter the nesting birds.

However, some simple tips and tricks might help you ward these birds off your property. One such example is usually a visual tactic. But what could you use?

Despite being a predator themselves, crows are afraid of larger predators like owls and hawks. But using the voice or fake figurines might scare away the nesting birds as well.

Therefore, you should go with other scare tactics that work only on crows. For instance, crows have an irrational fear of shiny, reflective objects as such CDs. You can tape some CDs around your property to ward them off. Additionally, a classic scarecrow has always been the most efficient method of driving away these scavengers.

Why do crows always go after the eyes of their prey first?

There are two reasons behind crows always going for the eyes of their victims/food:

Although crows will eat spiders if they find them, these birds do not actively seek or hunt the arthropods. It is because crows usually eat what they can easily find, and spiders are not all that easy to find (as they have learned to conceal themselves well). Additionally, spiders also have very little meat to offer to the crows.

Let’s revisit our first question: do crows eat other birds? Yes, they certainly do. Being scavenging omnivores, crows are not the ones to shy away from food, even when it is in the form of a bird. They can hunt and eat any bird (preferably) smaller than them and easy to kill.

Moreover, the eggs and nestlings of birds are their prime target. If you want to keep crows away in order to protect the nestlings, there are some measures you can take to achieve it. However, there’s no guarantee how long it will last since these birds are quite crafty and often find a way around any obstacle.