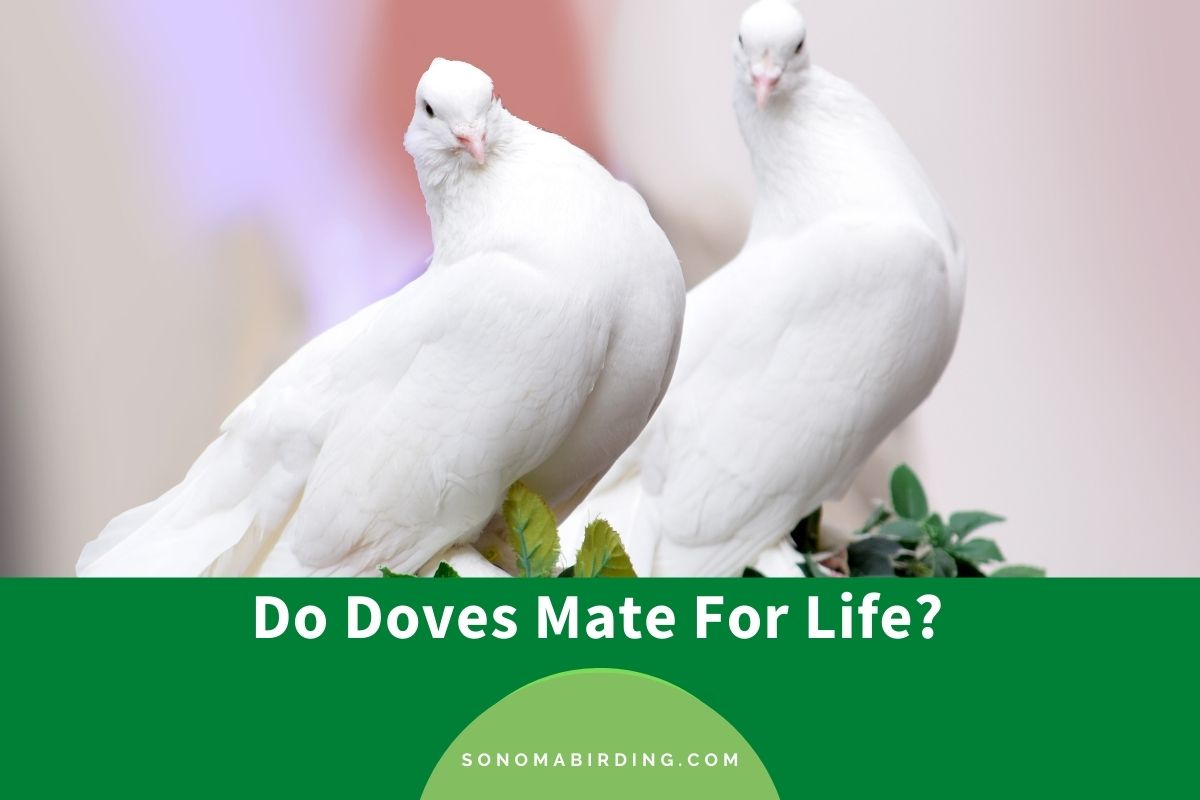 Doves have been used as a symbol of love from time immemorial. In Greek mythology, the goddess of love and desire, Aphrodite, is often shown attended by white doves. Doves are also commonly depicted in wedding traditions. With this, a question arises, whether or not doves mate for life. Let’s find out.

Do doves mate for life? Yes, doves do mate for life. Doves are released in a wedding ceremony for a good reason. They’re super loyal to their partners and do not seek other mates. However, there are some grave circumstances in which they get separated from their partners, i.e., when their partners are dead or lost during migration. When such a thing happens, the other dove might find a partner for themselves reluctantly.

In this article, we’ll tell you all about the mating habits of doves, including nesting habits, courtship rituals, and much more.

Contents show
When do doves reach sexual maturity?
How do Doves mate?
Courtship rituals in Doves
The cloacal kiss
What happens after mating? (Nesting habits)
Incubation
Do Doves cheat on their partners?
How do Doves mourn their mates?
Conclusion: Do Doves mate for life?
Related Articles

When do doves reach sexual maturity?

Did you know that doves have a short lifespan of only 5 to 6 years in the wild? It mostly happens because they’re either preyed upon by larger predatory birds or are shot down by humans. On the other hand, these birds can live up to 12 years in captivity. These birds can even live for 15 -16 years with proper care and nourishment in some rare cases.

Once they’ve reached sexual maturity, male doves are known to mate for the rest of their life.

Fun fact: The Mourning Doves are the most frequently hunted species by humans in North America.

How do Doves mate?

The Mourning Dove is probably the most commonly known dove species around the world. This species gets its name because of its cooing, which might sound mournful, but is actually a mating call.

If the dove in your backyard or window begins to coo a bit more than usual, don’t worry. It just means that their mating season has begun, and they are looking for a mate.

The mating call often referred to as the “Advertising Coo”, is a two-syllable coo, followed by two or three louder coos. Males who are yet to find a mate generally coo with a distinctive pitch, trying to get the attention of an attractive female.

Doves have a unique courtship ritual. In this ritual, the male doves perform an aerial display with robust and loud wing flapping to please the females. If they have found a potential mate, they bow down, pump their head, and coo to them.

Before mating, the initial nibbling and grooming of the head and neck take place. This gives way to another courtship behavior in doves, called “billing”. Billing involves the male opening his beak towards the female.

If the female is interested, they may insert their beak into the male’s and briefly pump their heads up and down. The female then crouches down before the male, which is considered to be an invitation to mate.

Soon after the courtship rituals are over, the doves begin to mate. The mating season of doves usually ranges from spring to fall. However, these birds can mate all year round and can give birth to several clutches of young ones many times in a year.

The doves do not have external reproductive organs like humans, so their mating process is different from ours.

When the doves begin mating, they just rub their cloacae together. In this process, the sperm from the male dove’s body gets ejected into the female dove’s cloaca. When it reaches the reproductive tracts of the female, it fertilizes their ovum. The whole process of dove’s mating lasts for about 15-17 seconds and is also referred to as the “cloacal kiss”.

What happens after mating? (Nesting habits)

Now that the ovum is fertilized, the next step for the doves is nesting.

If you have ever seen a pigeon’s or a dove’s nest, you’ll know that they are just some twigs, grass, weed, and pine needles put together in a loosely knit structure. Although it might strike as funny to most people, there is actually a very reasonable explanation for their nest structure.

Doves are very easily startled. It is an instinct built up in them because they often fall prey to large predators that sneak up behind them. The loosely knit structure of their nest can prevent their eggs from rolling away and breaking if the parent doves get startled and fly away. Moreover, the nest also protects the eggs when the object on which the nest is placed moves or sways.

The male dove gathers the raw materials, which the female uses to build their nest. Their nests are usually located 5-25 feet above the ground and are loose-fitted enough to see through them from the ground. The doves can use a well-built nest for more than one brooding season. In most cases, doves use the same nest for up to five brooding seasons.

After the nests are constructed, the female dove lays her eggs. Although these birds usually lay two eggs, at times, you can even find one or three eggs in their nest.

Do Doves cheat on their partners?

All of us can agree that the concept of polygamy is becoming increasingly popular in the human race. But what about doves? Is it common for these birds to cheat on their partners, too? No, doves do not cheat. They are fiercely loyal to their partners and are quite content in living with them for the rest of their lives.

With that being said, whenever a dove’s partner dies or is lost during migration, they do look for a new mate reluctantly. However, this is an entirely different circumstance and cannot be considered cheating.

How do Doves mourn their mates?

You must have seen Doves on an engagement/anniversary cake or Valentine’s day card. It is because these birds are known to symbolize a lifetime of love. But do they really love their mates for their whole life? What after one of them passes away? That’s what we will talk about in this section.

Since doves mate for life, it is not unusual for them to get attached to each other. Some might argue that these birds get too attached to their mates.

This is probably the reason why they mourn the death of their partners long after they have died or been lost. Many bird-watchers have reported seeing lone doves return to the place where they had lost their partners frequently.

Conclusion: Do Doves mate for life?

Widely regarded as the symbol of true love, doves are the birds all of us look up to for inspiration in our romantic endeavors. But are these birds truly the ideals of love as we believe them to be? Yes, they are. Doves are one of the birds that tend to mate for life.

Once these birds have found their partners, they stick with them through everything and truly follow “till death do us part”. Even after one of them dies or is lost, the other mourns them immensely and might often return to the place they had lost them in their memory.