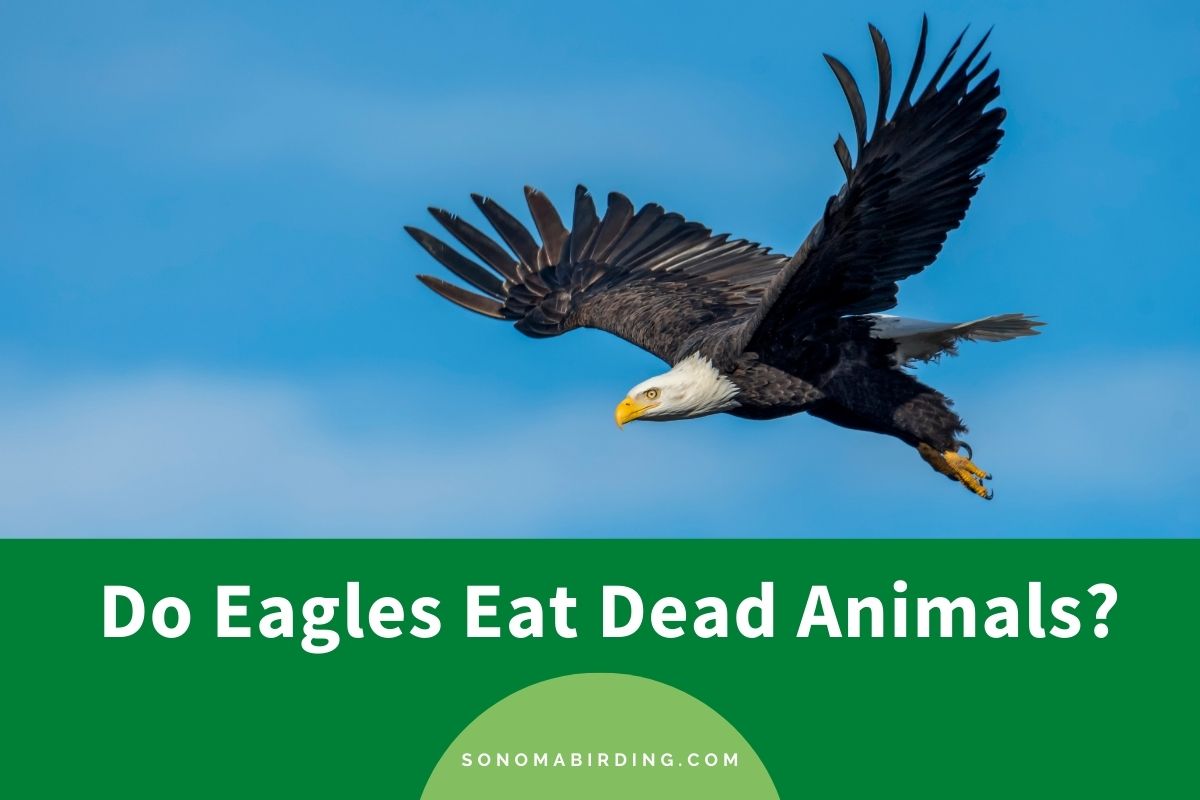 Whenever we talk about birds that eat dead animals, scavengers like vultures are the first birds that come to our minds. However, vultures are not the only birds that have dead meat in their diets. Many birds, like crows, hawks, and some species of storks and kites, often resort to carrion during a shortage of fresh prey or because they simply cannot or will not hunt. Today, we will be talking about one such bird: the eagle.

Do eagles eat dead animals? Yes, eagles do eat dead animals. Although eagles are birds of prey and can successfully hunt and feed on most other small birds and animals, they are known to have the tendency to scavenge and steal other birds’ food.

Stay with us till the end of this article, and we will tell you everything you need to know about the diet of eagles and whether or not it includes dead meat. We will also be discussing other birds that eat dead meat and if it is safe to do so.

Let us start with the initial question: do eagles eat dead animals? Yes, eagles do eat dead animals. While eagles are perfectly capable hunters (seeing as they are birds of prey), they have an inclination towards eating carrion and stealing other birds’ or animals’ food.

Sometimes, they let another animal kill the prey and then harass them to a point where they drop the food on their own.

The diet of eagles

Now, you may be wondering what other foods the eagles eat. Don’t worry; that is what we are here to help you with. Read on to find out the answer to your question.

Eagles are opportunistic feeders and, as we have already mentioned before, will not hesitate to steal other birds’ and animals’ food. Today, we will be talking about the diets of the six most commonly found species in the Americas: the Bald Eagle, the Golden Eagle, the African Fish Eagle, the Long-Crested Eagle, the Philippine Eagle, and the Steppe Eagle.

Now, let us dive into a detailed account of their diet.

Among all the other North American bird species, the Bald Eagles build the largest nest. Moreover, their tree-nests are also larger than any other tree nesting animal species. Isn’t that fascinating? Now, moving on to their diet, below we have curated a list of all the fish, birds, and animals these birds eat. Take a look:

Besides being the most widely distributed eagle species in the world, Golden Eagles are also the best-known bird of prey species. Let us now move on to their diet.

Did you know that the African-Fish Eagle can carry up to 10 times its own weight? This is also what helps them feed on baby monkeys and baby crocodiles. Moving on, let us discuss their diet in more detail.

If you are one of those people who have trouble identifying the different species of birds, rest assured; you will never confuse the Long-Crested Eagle with another bird.

These birds have a distinguishable black-colored towering, floppy crest. Not much has been discovered about their diet, but we have done our best to gather any info we found about it. 98% of their diet consists of rodents, which are:

Did you know that the Philippine Eagle is a critically endangered species? The main reason behind the endangerment of these birds is the loss of habitat, which is a result of deforestation. Now, let us learn about the diet of these birds.

What about the other birds of prey?

As we already know, eagles and vultures do eat dead animals. But what other birds of prey do the same? Keep reading to find out.

Yes, hawks are sometimes seen eating dead animals. However, they are only ever seen eating carrion when the weather is too cold or under any other circumstance where there is a food shortage. This means that, unlike eagles, hawks do not prefer eating dead meat at all.

Similar to the hawks, although falcons do not prefer dead animals, they will eat them if they have no other food choices. God, this is turning out to be a big waste of time, isn’t it?

Yes, they absolutely do. Kites are small birds that cannot hunt for larger prey. This leaves them with no choice but to feed on dead animals.

No, they do not. Owls are ferocious birds who like to hunt their own food, especially the larger species of owls, that mostly hunt prey that is either their own size or larger. However, according to a few newer studies, it turns out a few owls have been spotted feeding on roadkill. As soon as new information is found on this topic, we will be the first ones to tell you about it.

As we come to the end of the article, let us recap all that we have learned in this article. While eagles are vicious birds of prey capable of hunting their own food, they seem to have a tendency to feed on carrion and steal food from other birds and animals. Besides dead animals, eagles also feed on fish, rodents, and reptiles.

Lastly, we also talked about the other birds of prey and whether or not they feed on dead animals.