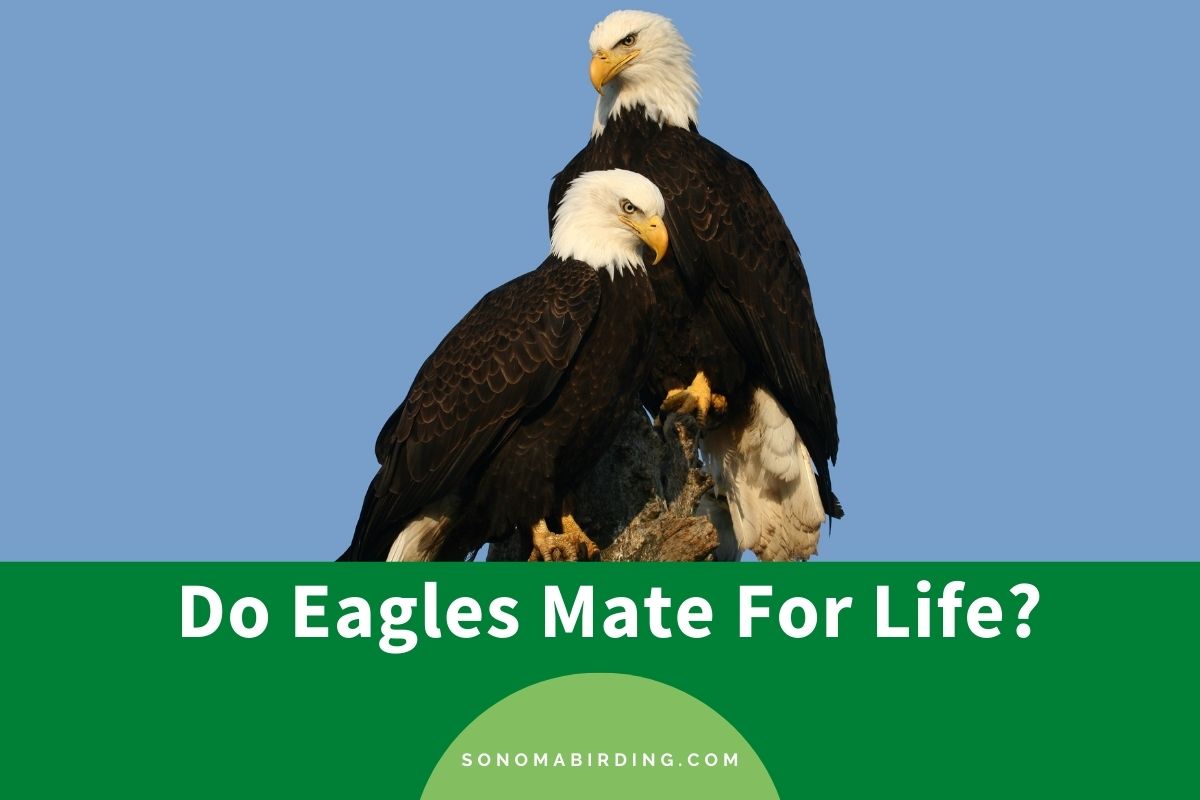 Whenever we hear the term “lovebirds,” birds like doves, swans, and even pigeons, are the first to enter our minds. We don’t even consider the possibility of violent raptors like vultures, hawks, and owls representing love and loyalty. However, the reality is far from it.

What if we told you that all of the above-mentioned raptors mate for life? Wouldn’t that be surprising? In this article, we will be discussing one such bird of prey: the eagle.

Today, we will talk about the two most commonly found species of eagle: the Bald Eagle and the Golden Eagle. Later, we will also discuss their mating and nesting habits, including the age of their sexual maturity, courtship rituals, the cloacal kiss, nest building, incubation period, and more.

When do eagles reach sexual maturity?

How do eagles mate?

Now, let us talk about how Golden and Bald Eagles mate. In this section, we will be discussing their courtship rituals, the mating process, incubation period, and more.

When birds are ready for the breeding season, they (usually the male) perform a number of elaborate courtship displays to attract a suitable mate for themselves. These rituals are basically a form of communication among the birds that allows them to signal their willingness to breed.

Bald Eagles also perform a majestic courtship ritual before they settle down to lay eggs. This involves both the birds flying up to a great height, interlocking their talons, and spinning as they plummet to the ground.

While most pairs unlock their talons before impact, a surprising number of pairs have been reported to hit the ground together; whether it is intentional or not remains to be discovered. Besides this, Bald Eagles also have mock fights as a part of their courtship rituals.

The breeding season for the Golden Eagles starts in March and lasts up to August. However, the non-migratory eagle species (although few in numbers) are seen pairing up and building nests much earlier, in December.

Most of the courtship rituals among the Golden Eagles include flying, with extravagantly displayed swoops and dives. Sometimes, male and female eagles are also spotted soaring together, after which the male first bolts ahead of the female and then dives right back.

Here, the female turns its back on the males and then showcases its talons to them. Other than this, mock fights and chasings are also widely observed among these Eagles.

After the courtship rituals, the Golden and Bald Eagles are ready to mate. Both of these bird species reproduce through the same process, which is called the “Cloacal Kiss.”

The most common posture for this process is for the female to be crouched on the ground, with the male on top of them. The female might also hunch over or even lay on the ground to make itself more accessible to the male. The male then bows or arches to rub its cloacal opening to the female.

The sperm from the male’s cloaca is transferred into the opening of the female, where it travels through the reproductive passage and fertilizes their ova. This whole act lasts for only 15-17 seconds. After the fertilization, the egg formation begins.

What comes after mating? (Nesting habits and incubation)

After the courtship rituals and the cloacal kiss are completed, the soon-to-be parent eagles start building their nest for the incubation period and the hatchlings. Let’s learn more about the nesting process of both these eagles.

Now, let us discuss the nesting habits of the Bald Eagles.

Bald Eagles return to the same nest every year. So, after making the nest for their first brood, the pair just adds a few more sticks and twigs (1 to 2 feet of materials) to reshape it into its original form.

The average Bald Eagle nest has a width of about 4 to 5 feet and a depth of 2 to 4 feet. They usually build their nests on the tallest living trees (super canopy). In some places, like Alaska and Canada, where there aren’t enough trees, these eagles are also seen nesting on the ground.

They make their nests at the top of the tree and support it with forked branches near the trunk. The outer structure of the nest is built with simply interwoven sticks and twigs. The interior, on the other hand, is lined with soft materials like grass, wet moss, corn stalk, and the downy feathers from the parent birds.

Soon after the nest is fully built, the female Bald Eagle lays the eggs. The average Bald Eagle clutch consists of around 3 eggs. They have an off-white hue, are 3 inches long, and 2 inches wide.

The incubation period in Bald Eagles lasts for around 35 days. While both the parent birds share responsibility for the incubation of the eggs during this period, the female bird typically spends more time with the eggs. On the other hand, the male Bald Eagle hunts and brings food for the mother bird.

After the eggs hatch, the newborn hatchlings stay with their parents for about 120 days (4 months). During this time, they learn to fly, hunt, and fight other birds. After four months, the juvenile Bald Eagles are ready to leave their parent’s nest and fly out in the world.

Unlike some other bird species, the male Golden Eagle does not abandon its partner after the mating period is over. In fact, the nest building is an important bonding activity for the pair. Just like Bald Eagles, Golden Eagles also return to the same nest every year. In fact, most raptors do the same.

The diameter of an average Golden eagle’s nest is somewhere around 5 to 6 feet in diameter and has the same depth as that of a Bald eagle’s nest (2 to 4 feet). The most common nesting location for these birds is on top of cliffs. However, if they happen to be far away from cliffs, they can easily build their nests on the ground, on trees, or any man-made structures, such as towers and windmills.

These birds make their nests using twigs and sticks but line them with heather and woodrush leaves. They also decorate the nest with moss and green foliage.

The eggs of the Golden Eagles are the same size as that of the Bald Eagles. They are off-white in color with several brownish spots scattered all over them.

The incubation period for the Golden Eagles lasts for around 41 to 45 days. Similar to the Bald Eagles, the mother bird spends more time incubating the eggs, while the male Bald eagle hunts and brings food, both for themselves and their partner.

After the eggs hatch, the eaglets stay under the care of their parents for about 90 to 100 days, after which they leave the nest. However, during this time, the parent eagles teach them all the skills necessary for their survival in the wild.

Do eagles mate for life?

Now, coming back to the original question, do eagles mate for life? Yes, they do. Eagles are incredibly loyal birds and remain monogamous throughout their life.

Although most eagles prefer to live on their own for the rest of the year, during their breeding season, they always return to meet the same partner. However, if the partner of an eagle dies during the year, they usually seek out a new mate.

Moreover, eagles are both sexually and socially monogamous. If the male bird stays with the female throughout the incubation period and co-parents the hatchlings, they are socially monogamous as well. And as we have already mentioned in the previous sections, the eagles are fiercely protective of their fledglings and teach them all they can to make sure they survive in the wild.

In this article, we learned that eagles are sexually and socially monogamous birds that mate for life. However, if an eagle’s mate dies, is lost, or cannot meet them during the next breeding season, they will reluctantly find another mating partner.

Lastly, we also learned about the breeding seasons, mating processes, and the nesting habits of two of the most commonly found species of eagles: The Bald and Golden Eagles.

Do Hawks Mate For Life?