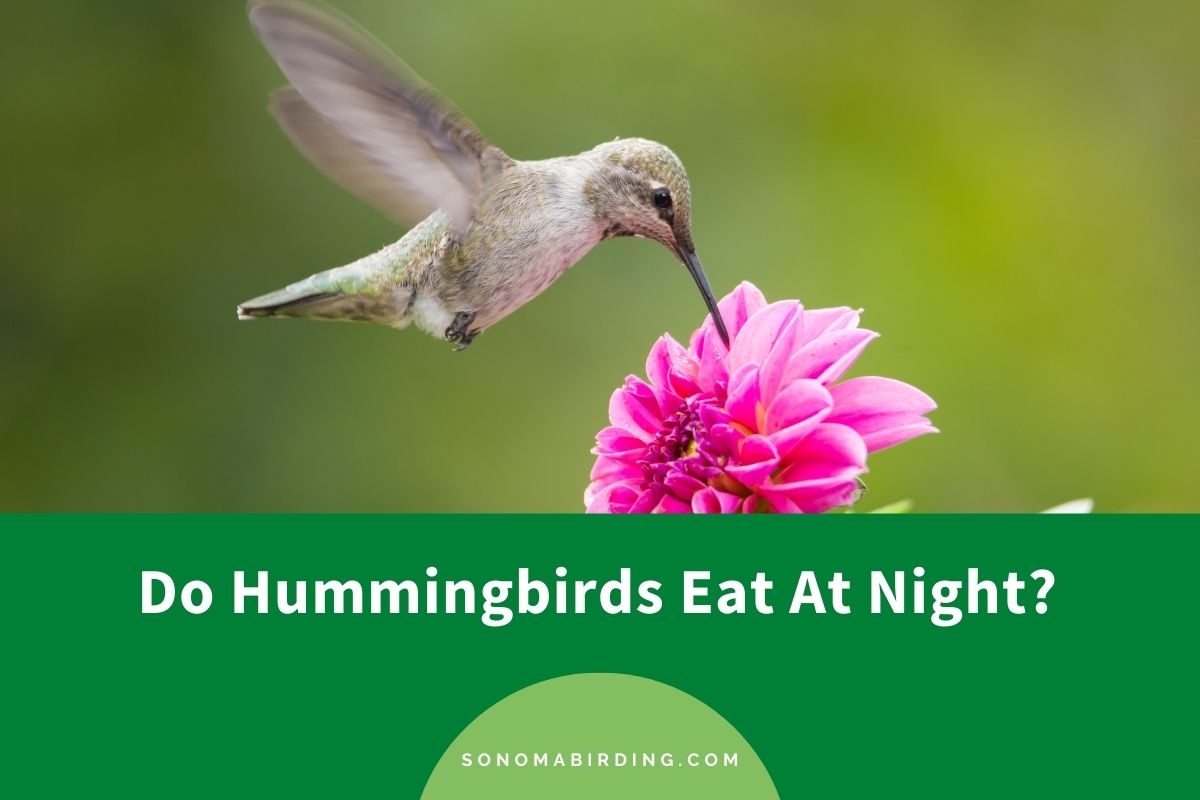 Did you know that hummingbirds can fly a distance of over a thousand miles without taking a break despite their tiny size? And though it usually happens during their annual migrations, you might have noticed how they’re almost always spotted in flight, rarely at rest.

We already know that hummingbirds are highly energetic birds, but have you ever wondered how they’re able to maintain their lifestyle? Of course, they also draw energy from their food. But how much do they need to eat in order to stay so active? And how often? Do they eat at night as well? Well, let’s find out.

Do hummingbirds eat at night? No, they don’t. Hummingbirds are active throughout the day, which is when they eat as well. At night, these hummers go into a torpor state, in which they require much less energy than usual.

All hummingbird species in the world follow a strictly diurnal schedule, spending their nights in torpor. In this article, we’re going to talk about whether or not hummingbirds eat at night and what else they use nighttime for.

Contents show
Hummingbirds do not eat at night, and here’s why
What do hummingbirds do at night?
Frequently asked questions
Conclusion
Related Articles

Hummingbirds do not eat at night, and here’s why

Now that we’ve already established that nighttime feeding is not a hummingbird activity let’s discuss its possibility.

Is it possible for hummingbirds to feed at night? Well, yes and no. While it is not outright impossible for them to eat at night, it isn’t easy either. Wondering why? Keep reading to learn the answer to your question.

First and foremost, hummingbirds are warm-blooded creatures, much as any other bird. In other words, these little birdies also need a warmer temperature for a better blood flow inside their body, which supports the functioning and movements of their wings.

Because the temperature falls significantly at night, the hummers suffer weakness and prefer to stay tucked into their nests rather than venturing out for food.

This is also why you will only see hummingbirds flying outside after dark in the warmer weather.

The unavailability of natural food sources at night

While most hummingbirds have adapted to eating from feeders, bright flowers are still a natural and more appealing food source to them. And because most flowers also need sunshine to open, daytime is ideal for the hummers to feed.

The problem of blurry vision

Because hummingbirds are primarily diurnal birds, they’re not blessed with a night vision as sharp as the owls’. Because of it, these birdies cannot see very clearly at nighttime and are, thus, more vulnerable.

In other words, staying in their nests is a necessity for the survival of these birds.

So, we’ll assume that you’ve now understood why the hummers avoid feeding during nighttime. Do you have more questions? Let’s dwell on those in the next section.

What do hummingbirds do at night?

Hummingbirds are indulged in feeding only in the daytime. But what do these feisty birds do at night? Well, anyone’s first guess would be sleeping. And indeed, the hummers spend their nights sleeping.

However, our definition of sleeping might not match with the hummingbirds. Instead of falling asleep like humans, these birds enter into a semi-awake state which is referred to as “Torpor.”

Where do hummingbirds sleep at night?

So far, we’ve learned that hummingbirds utilize their nighttime in sleeping. But where do they go to sleep?

Like many other birds, the hummers also build and reside in nests only during the breeding season. Outside of the breeding season, they find other spots to sleep in. Some of their preferred sleeping spots include secluded nesting places among the trees, where they’re protected from both the weather as well as predators.

Trees of poplar, birch, oak, and pine are some of the hummers’ ideal sleeping choices.

Do hummingbirds sleep upside down?

Yes. Just like hummingbirds can feed upside down, they can also sleep in that position. Due to this peculiar sleeping position, many people often consider them dead or dying.

But in truth, the hummers are in their torpor state, resting and rejuvenating their bodies. Although ornithologists haven’t been able to confirm why these birds do it sometimes, it is nothing you need to worry about. Just leave them alone, and they’ll be fine.

Will hummingbirds leave their nest at night?

No, they will not, at least not until they absolutely need to. Once a female lays their eggs in the breeding season, they incubate them all night long until they’re hatched.

As you might already know, hummingbirds are extremely tiny in size and are, therefore, more vulnerable to colder temperatures than other, larger birds. This is why it’s safer for them not to leave their nests at night.

Do hummingbirds sleep in solitary?

Hummingbirds are solitary creatures, which is why it would make sense that they’d enjoy sleeping alone. Their territorial nature is a perfect example of how they don’t like to share their food or space. Therefore, you will never spot the hummingbirds huddled together between the trees, sleeping.

Do hummingbirds fly at nighttime during migration?

Not all hummingbirds fly at night during migration. Only some far-migrating species, like the Ruby-throated Hummingbirds, need to fly at night while they’re crossing a large water body.

Do hummingbirds sleep at night only during winters?

No. The animals that go to sleep during winters actually hibernate. And hummingbirds are incapable of hibernation. Therefore, they go into a torpor state every night, as the sky grows dark.

So, what have we learned in this article? We’ve learned that it is a general rule for hummingbirds to only sleep during nighttime and not eat. These birds are not well-adapted to go out seeking food in the dark, cold nights due to their diurnal schedule.

Therefore, if you’re one of the birders who is wondering if they could bring inside their hummer feeders to avoid inviting other pests, you can safely go ahead. The chances of a hummer looking for food on your feeder at night are very few.

10 Plants That Attract Hummingbirds To Your Yard