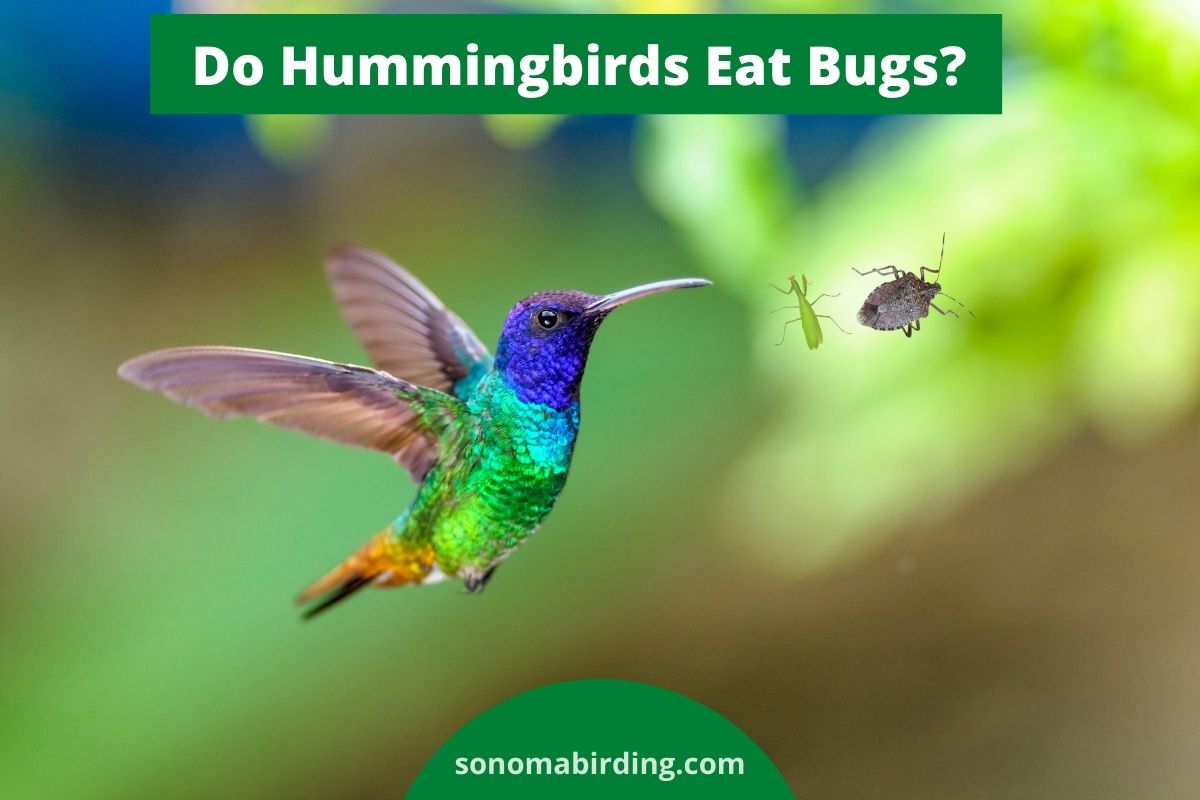 If you’ve ever wondered whether or not hummingbirds eat bugs, you’re not alone. Maybe you want to feed these beautiful birds something other than sugar water. Or maybe you’re concerned that the sugar isn’t good for them. Let’s find out.

Do hummingbirds eat bugs? Yes, contrary to popular belief, hummingbirds do feed on a variety of insects. Like all the other birds, hummingbirds need nutrients such as vitamins, minerals, fibers, fats, etc., to remain healthy; these requirements are not met by merely feeding on nectar. The insects they feed on might vary according to their location and availability, but some insects, such as spiders, beetles, wasps, flies, and aphids, are most preferred by them.

Are you curious about the diet of the hummingbirds? Or do you want to learn about feeding them insects in order to attract them to your backyard? Don’t worry; in this article, we will discuss everything you need to know about hummingbirds and the bugs they feed on.

Diet of the Hummingbirds

Since the hummingbirds are tiny in size, you would think that their diet would be small as well. However, these birds have a rather large appetite and can eat half of their body weight every day.

Most people believe that hummingbirds are attracted to all things sweet, and they’re not completely wrong. The sweet, sucrose-filled nectar from various flowers makes up a major part of their diet.

The forked tongue of these birds comes in handy in this process; they extend it to reach the bottom of the tubular flowers to extract their nectars. Their tongue is not just forked but also surprisingly fast, allowing them to lick 13 times in a single second.

Hummingbirds are opportunistic feeders, as they lie in wait for a ripe fruit to fall down the tree and then quickly suck all the juice out of it. You can also call them thieves since they sit and wait while the woodpecker works hard to free the tree’s sap and then drink it when they get the opportunity.

But can sap and nectar be enough to sustain these birds? While most people believe that’s all they eat, the hummingbirds also need protein, salt, vitamins, minerals, oils, fibers, and fat in their diet to remain healthy, just like any other bird.

So, how do they find these nutrients? Through bugs. And, as you might have guessed, one or two birds cannot suffice to provide them all these nutrients. This is why these birds feed on a diverse variety of bugs.

Bugs that the Hummingbirds feed on

Beetles are a group of flying insects that have hardened forewings, known as elytra. There are more than 400,000 species of beetles in the world, out of which only 25% have been recognized. The weevils fall into this family as well. Following are some of the common beetles that the hummingbirds feed on:

The spiders make the largest order of the arachnids. These eight-legged insects are known for their venom glands and spinnerets that produce silk. There are over 45,000 recognized spider species divided into 120 families. Below are the names of the spiders that are most widespread in the United States:

Neither bees nor ants, wasps are small, narrow-waisted insects that belong to the suborder Apocrita. They have a large and diverse family that has over a hundred thousand recognized species in the world, with many still unrecognized. Following are the most common wasp species you can find:

Also referred to as “Daddy Longlegs” and “Harvesters”, the Harvestmen are an order of Arachnids that are known for their exceptionally long legs. These insects have a seemingly oval body and lack venom glands, which is why they are considered to be harmless to humans. There are over 10,000 harvestmen species throughout the world, out of which only 6,650 species have been recognized.

With over 20,000 recognized species all over the world, the leafhoppers are small plant-feeders that suck on the sap from trees, shrubs, and grass. These insects are divided into 24 subfamilies. Some of the common leafhopper species are:

Mites are a family of eight-legged arthropods that are so small that they often go unnoticed by humans. These insects have diverse habitats; while most of them inhabit soil as decomposers, there are others found in water and plants.

Mosquitoes are a family of small insects characterized by a slender but segmented body, elongated mouthparts, one pair of halteres and wings each, and three long pairs of legs. There are about 3,500 different mosquito species in the world.

Gnats are tiny, flying insects that belong to the suborder of Nematocera. While some of their species are ferocious biters and can spread diseases, others do not bite. The following are some of the most common gnat species:

Aphids are a family of tiny, sap-sucking insects that have a reputation for being the most destructive pests in temperate regions.

These insects have a small, soft body that has a variety of colors (black, green, brown, pink), with some species being colorless. In comparison to their body, they have rather long and thin legs. There are about 5,000 species of aphids in the world.

Following are some of the common aphid species that the hummingbirds feed on:

Ants are small but highly social insects of the Hymenoptera order that are closely related to bees and wasps. They can easily be identified by their slender waists and elbow-shaped antennae. There are more than 22,000 species of ants in the world, out of which roughly 12,000 have been classified. The ant species that are commonly fed on by the Hummingbirds are:

Flies are a large family of flying insects that belong to the Diptera order. These insects are often known as “Two-winged Flies” for their only use their forewings to fly, while their hindwings have evolved into halteres that help their rotational movements during flight. There are over 16,000 fly species in North America alone, out of which hummingbirds feed on the following flies:

How to offer bugs to the Hummingbirds?

Having frequent hummingbird visitors to their backyard is the dream of many birders. But can you use the knowledge of their bug preference to lure them into your feeder? Unfortunately, not.

Many of the birders might not know this, but these birds do not feed on the bugs you put into your feeders. This is because they prefer to eat them in their raw, natural form. Dried or dead bugs have no appeal for them.

With that being said, there are other indirect ways in which you can attract these birds to your backyard using bugs:

To answer your initial question: hummingbirds are as much an insectivore as a nectarivore, which means that both bugs and nectar make equal half of their diet. In fact, these birds are dependent on bugs for most of the essential nutrients. While you can’t attract hummingbirds to your feeder by using dried or dead bugs, you can certainly make other changes in your yard to achieve your goal.

You can also read:

10 Species of White Birds in Florida