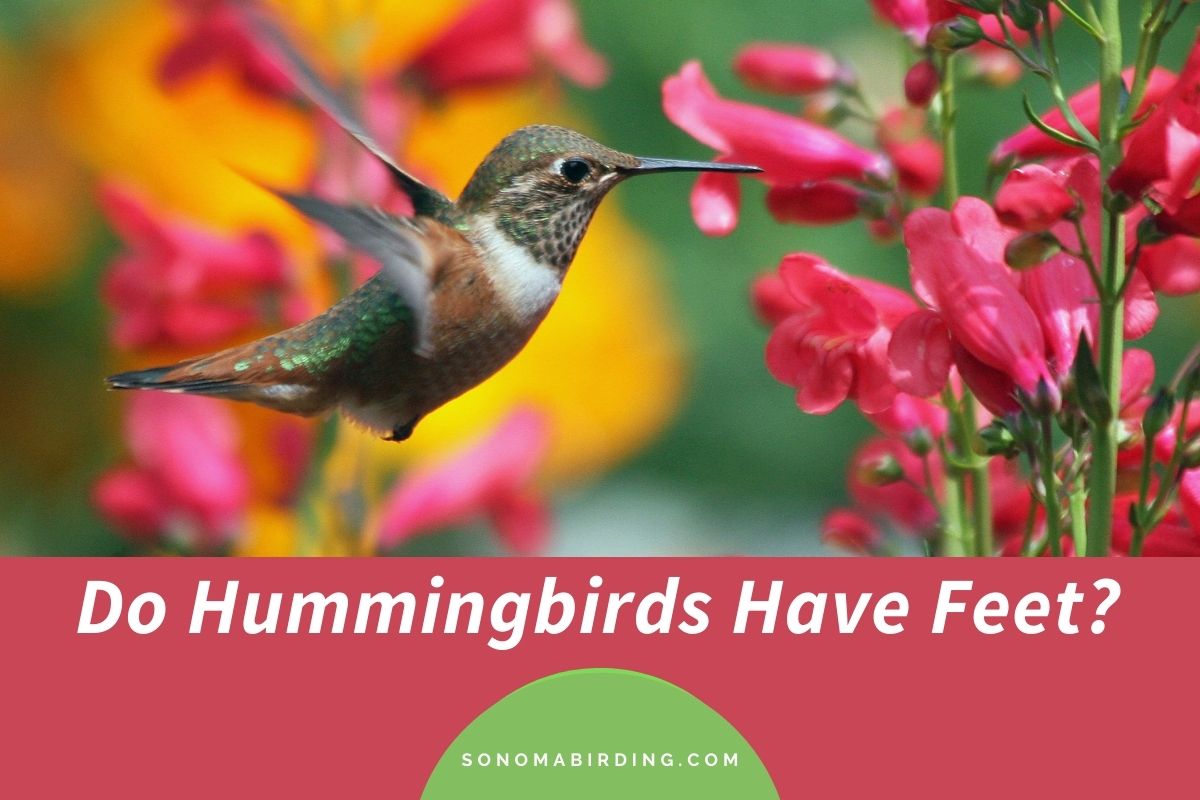 Many birders out there would agree with me when I say the hummingbirds are one of the fascinating creatures of the avian world. They’re the only species of birds that can fly backward. The tiny bodies of these fiery birds are so filled with energy that their wings flap faster than any other bird. In fact, it is the sound made by their flapping wings, and not their calls, that have lent them their name.

These nickel-sized birds are quite elusive, with a number of myths surrounding them. One such myth claims that hummingbirds have no feet. Is there any truth to this myth, or is it all just an old wife’s tale?

Do hummingbirds have feet? Yes, like all other birds, hummingbirds also possess legs and feet. However, their feet are not suitable for walking for long periods due to their highly aerial lifestyle. With that being said, there are many other ways in which they use their legs, including fighting, scratching, and perching.

When it comes to hummingbirds, most people think that they spend their entire lives being airborne. The fact that they belong to the Apodiformes order adds to their belief.

It is because the Latin term “Apodiformes” translates to “having no feet,” although the birds belonging to this order do have feet; only their feet are significantly weaker than other birds.

It might come as a surprise to most people, but the hummers spend more time perched than in flight. But why have you never spotted them on a tree branch before? Well, that has more to do with their size than their aerial nature. The thing is, they’re so small that it’s almost impossible to spot them from a fair distance.

I’m sure this revelation has birthed many new questions in your mind, but you needn’t worry. If you stay with me till the end, you will have answers to all those questions and more.

Contents show
“Hummingbirds have no feet”: Myth or reality?
The anatomy of hummingbirds’ feet
Can hummingbirds walk?
What do hummingbirds use their feet for?
Perching
Fighting
Scratching
Building a nest
Conclusion
Related Articles

“Hummingbirds have no feet”: Myth or reality? 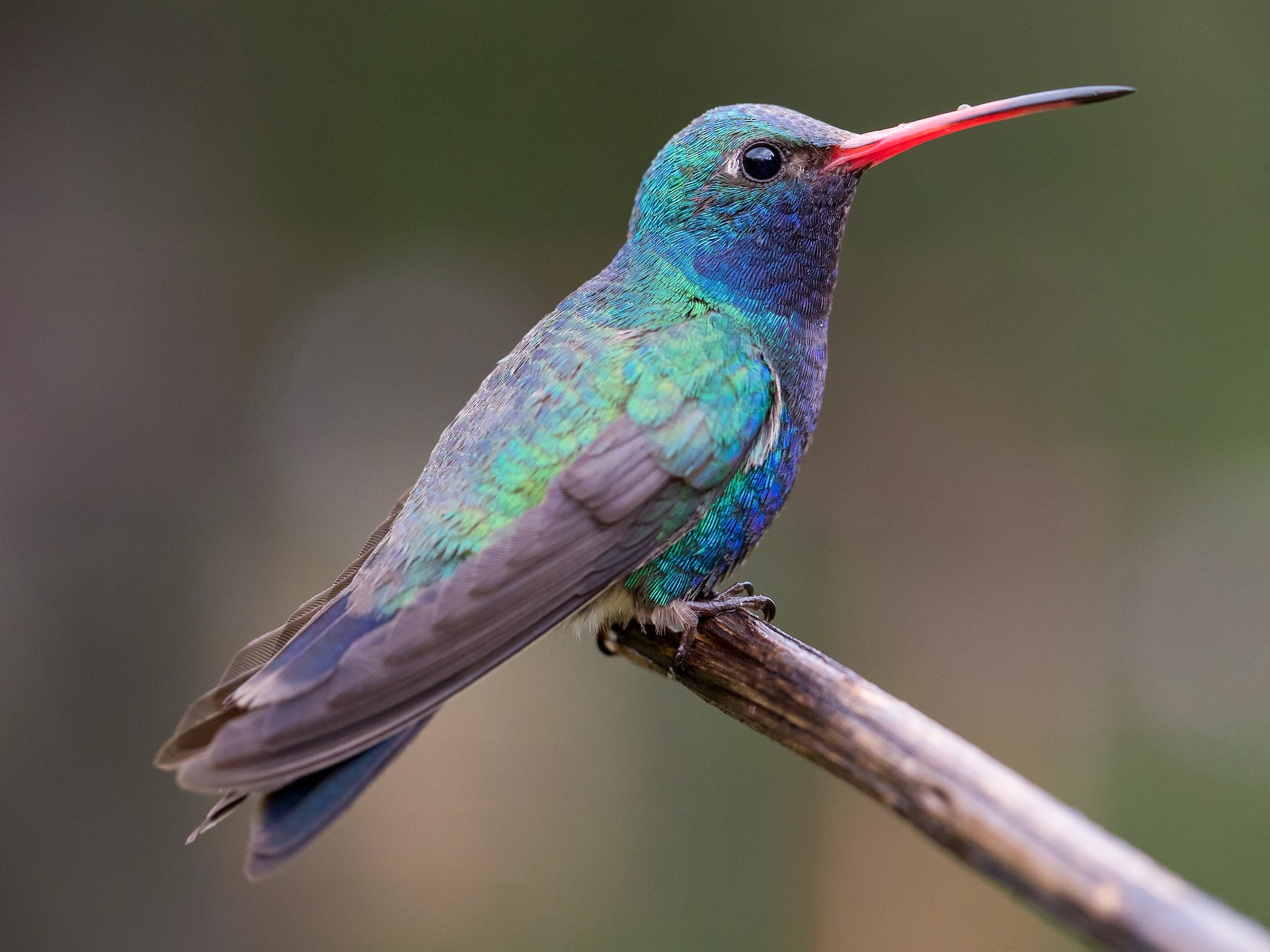 Yes, it is a myth. Now, before debunking this myth, let’s first get to the bottom of it. How did such a myth originate in the first place?

Well, the root of this myth lies in another myth, which claims that hummers will die if they stop flying. But this myth, just like the other one, has no truth to it.

In truth, hummingbirds do have feet. However, their feet are also adapted to help them fly; they’re quite small and stay tucked up in their rump so that you can’t easily see them. So, the next time you hear someone saying they don’t believe hummers have feet, feel free to correct them.

The anatomy of hummingbirds’ feet

Now that we’ve established that hummers indeed possess feet, we will move ahead to learn about what their feet look like.

The feet of hummingbirds are four-toed, with three toes placed on the front and the last one located at the back. The toe at the back is also known as a “Hallux” and is the most important one.

This toe works in the same manner as our thumb; it helps them maintain their grip and balance, allowing them to perch on, or hang from, tree branches.

It is also important to note that the configuration of hummingbirds’ feet is similar to that of the passerines or perching birds. It is a clear indication that the hummers use their feet for perching as well. Overall, their legs are short, thin, and delicate.

It is common knowledge that all birds spend at least a little time walking, be it large raptors like eagles or small ones like robins. In fact, many birds are primarily ground foragers despite having decent flight skills, such as pigeons and doves.

And since the hummers also possess legs, don’t they use these to walk? The answer to it is more complicated than yes or no.

While it is not impossible for hummingbirds to walk on the ground, it is not a preferred choice for them either. Wondering why? Let me tell you.

The feet of these birds are not only small but also have an asymmetric ratio between the length of their legs and feet. In other words, their feet cannot support walking properly.

At best, they can slowly shuffle on the ground for a short period, perhaps less than 5-8 minutes. In fact, their weak feet have evolved them into more efficient fliers.

So, the next time you spot a hummer walking on the ground, it is perhaps because the bird is in danger or threat.

What do hummingbirds use their feet for?

You might be wondering what’s the point of hummers’ legs if they can’t use them for walking. Don’t jump to conclusions just yet; evolution is a beautiful process.

Everything we possess today has some or the other purpose, how small it might seem. The legs and feet of hummingbirds are no exception to it. While they don’t help them walk, they do make their lives easy in other ways.

Let’s learn about the main uses of their feet below:

We’ve already talked about this one earlier in the article. Perching is one of the most important activities that the hummers do with their feet. Without the ability to perch, these birds would never get to rest at all, which can’t be a good thing for their health.

While many of you might have never seen a hummer perched on a tree, they do it frequently. These birds prefer to sit on the edge of a branch to have fewer distractions from there and keep an eye out for predators.

Tiny birds like hummers rank considerably low on the food chain, which is why they must remain alert at all times to survive in the wild.

Due to their tiny feet, hummingbirds also have a small grip. This is why they’re more comfortable perching on thinner branches and wires.

You must never underestimate a hummingbird by its size. These little birdies are quite fiery; they’re aggressive and territorial, particularly while protecting their food sources and nesting sites.

As a general rule, the males are more violent than their female counterparts and are often seen engaged in fighting with other competitor males. To your naked eyes, it might seem like a friendly push, but up close, it’s quite a spectacle.

In a fight, the hummers often tend to use their feet to grab their opponent mid-air.

The urge to scratch is as prevalent in birds as it is among us. Scratching is also a method for hummingbirds to clean their bodies; the process is not too different from preening.

You must be wondering how these birds can reach their entire back, particularly their heads, with their tiny legs. Indeed, they can’t, which is why they’ve devised a unique method to do it.

Hummers perch themselves on a branch, maintaining balance with one foot while dropping their wings forward and using the second foot to reach their back. They repeat the same process with both feet to clean themselves thoroughly. It’s quite a spectacle to watch.

So far, all the purposes we’ve discussed are for both sexes of the hummers. However, this one solely concerns the females. Wondering why? Well, it’s because, among the hummingbirds, only the females are responsible for building nests in the breeding season.

And hummingbirds’ nests are a wonder to behold; they’re small but built in perfect symmetry. They’re also surprisingly strong.

The female hummers also use their bills to build their nest like other birds. However, in the end, they use their feet to stamp the nest from all sides to give it the desired shape and strength.

And we’ve finally reached the end of this article. We began by successfully debunking the myth that hummingbirds have no feet, then talked about the fact their feet aren’t suited for walking and learned the reason behind it.

Later, we also explored all the activities that the hummers use their feet for, which include perching, scratching, fighting, and giving their nests a symmetrical shape. After debunking the myth of hummers not having feet, I’ll address other myths surrounding these birds in my next articles.

Thanks for reading this article. Have a nice day 🙂

Can Hummingbirds Open Their Beak?

Do Hummingbirds Eat At Night?