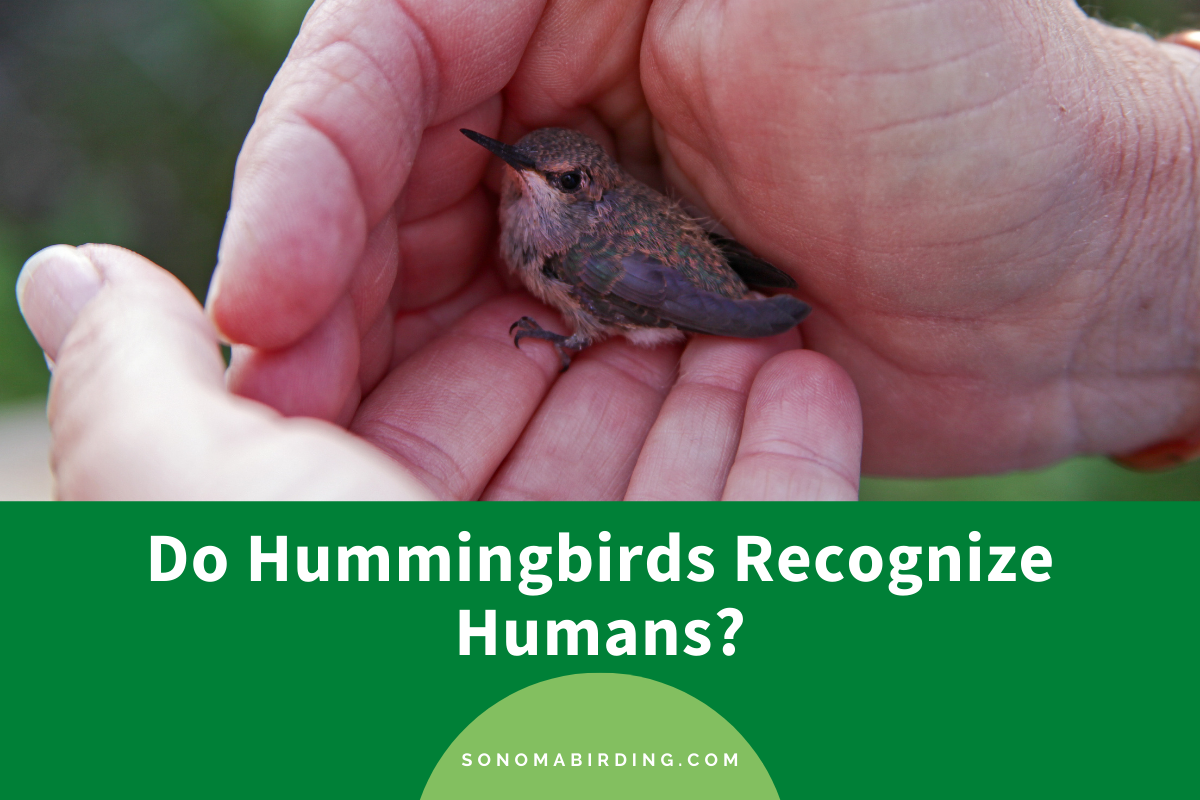 Although there are a large number of birds that would be happy to feed in your yard, haven’t you noticed how the hummingbirds have a soft corner in your heart? Well, you’re not alone. There are so many qualities about these hummers that make them adorable to us, and today, we’re going to talk about one such quality: their ability to recognize and remember people.

Do hummingbirds recognize humans? Yes, hummingbirds possess strong memory, sharp auditory senses, and vision, which help them recognize and remember humans. However, these birds don’t remember every human they’ve seen in their lives. In fact, they are most likely to remember the birders from whose feeders they drink nectar.

In this article, we will learn all about the mental capacity of hummingbirds to remember and interact with humans. Later, we will also discuss how, as a birder, you can create a safe space for the hummers in your yard.

How do hummingbirds recognize humans?

As we’ve already established in the introduction, hummingbirds are capable of recognizing humans. But have you ever wondered how these little birdies could remember humans? Can they remember every human being they come across in their lifetime?

To answer these questions, let’s study the two primary factors that play a crucial role in the hummingbirds interacting with humans.

Hummingbirds have a strong memory

Did you know that the brain of a hummingbird comprises 4% of the total body? It might come as a surprise to many, but 4% is quite a high equation of brain-to-body ratio, even in the case of humans. Moreover, the hummers have a specially structured brain with the hippocampus deep-seated into its temporal lobe.

It is this temporal lobe that accounts for their strong memory power and ability to recognize humans. However, hummingbirds will not recognize every human being they come across. They tend to remember certain environments and people with anecdotal references, such as those who refill their nectar feeders.

We just discussed how the hummers possess a comparatively strong brain. But that’s not all these birdies excel at; additionally, they also have a strong auditory system that helps them to recognize human beings and distinguish between them using their voice. Lastly, the hummers also have a sharp vision and can recognize humans by their looks.

Once the hummingbirds notice a behavioral pattern of a person – their voice and look – they will become friendly towards humans and will gladly feed on their feeders.

So, now we’ve decoded how hummingbirds can recognize humans and become friendly with them over time. Has a hummingbird ever hovered over your face? If they have, aren’t you curious what it could mean? Let’s find out in the next section.

Do hummingbirds hover over your face? Here’s what it means

Hummingbirds, when they fly around your face, appear not much larger than the bees or other flying insects with similar tendencies. But can you imagine what’s the reason behind this behavior? That’s what we’re going to discuss in this section.

There are two main reasons that can best explain this behavior in the hummers: curiosity and appetite. Now, let’s figure out how these work for the hummingbirds.

Hummingbirds are one of the most inquisitive creatures in the aviary world. As we’ve already established earlier, hummingbirds have a great sense of vision. This is why you will always find them flying around flowers like petunias, cardinals, sunflowers, and so on.

It has been reported that all the flowers that are red, purple, pink, and blue in color hold a great appeal for the hummingbirds. Hence, when humans are dressed in one of these likable colors, the hummers tend to hover over their clothes and faces out of curiosity.

Now that we know the hummers admire colors like red, pink, and purple, it is only logical to buy them colorful feeders.

Hummingbirds, like every other creature on the planet, are appetite sensitive. Besides curiosity, they hover over your face when they need to fill their stomachs.

When hummers recognize a human who regularly feeds them, they tend to interact with them, informing them about the feeders’ situation by hovering over their face.

And as we already know, hummingbirds have a rapid metabolism rate which demands them to eat every ten minutes. This is even more important for migratory hummers, as they need more energy to travel long distances. Hence, they keep hovering over the face, making chirping sounds to indicate that they need their feeders to be refilled.

Do you want to know an interesting fact about hummingbirds’ intelligence? These birds with virtuous memory can remember the territories with potential food supply even while migrating. This is why when the hummers fly across several nations during migration, they always remember the places where they can feed on nectar.

And if a hummer is a non-migratory species, they will remember not only the flower gardens but also the nectar refilling time of those flowers. Isn’t that fascinating?

If you ever notice the hummingbirds being aggressive while hovering over your face, it is a sign that they’re extremely hungry and want you to refill the feeders immediately. Another reason for their aggressive behavior a be a psychological mechanism of protecting one’s territory. Know that you have entered the hummingbird territory and the birds feel threatened by you whenever they aggressively hover over your face.

How do hummingbirds interact with humans?

Hummingbirds primarily interact with humans when there’s a need for food. Sometimes, you can notice that hummers make a chirping sound besides hovering over the face to encourage feeder stockers.

As mentioned before, hummingbirds are inquisitive in nature and can also interact with humans in a friendly manner purely for the sake of their curiosity. Although rare, sometimes hummingbirds are seen to be landing on a person’s head or shoulder.

Alternatively, the hummers also interact with humans when they feel threatened. Since their impeccable memory helps them remember and recognize humans, they can also get cautious noticing a new human being in their territory. And in order to protect themselves, they might oddly hover over their face.

It is essential to understand the behavioral pattern and nature of hummingbirds to help them lead a threat-free lifestyle. In the next section, we are going to further discuss how to gain the trust of hummingbirds to ensure a safe environment for them.

The nature of hummingbirds: How can you gain their trust?

By now, we have established that hummingbirds are not a very dangerous species of birds. However, every creature owns a comfort level and feels threatened when an unknown creature enters its territory. Similarly, hummingbirds also express their discomfort by interacting with humans in different ways, as discussed before.

One must understand the nature of hummingbirds and have patience, to ensure that they trust you. Let’s discuss the common phenomenon that is incorporated by most birdwatchers to gain the hummer’s trust.

As established before, hummingbirds love the color red. So, it is ideal for wearing red attire and standing two feet away from an adequately stocked feeder. Remember, the two feet distance is mandatory as this ensures that you are not entering the bird’s territory. Stand still for ten minutes every day.

After a few days, hold the feeder and sit still. It is preferable to wear red or sit on a red chair. After 2-3 days, if the hummingbird starts feeding on the feeder you are holding, understand that you have gained their trust. It might take some time, but eventually, one can befriend hummingbirds.

Are hummingbirds aggressive? Here’s how you can comfort them

Anyone who has ever seen a hummingbird up close would know that these little birds are mostly harmless but can grow aggressive on some occasions. If you want the hummers to be friendly with you, you must have learned how to gain their trust; but keep in mind that them trusting you cannot guarantee any aggression on their part.

Now, do you know what could inspire aggression in the hummingbirds? Well, the two primary reasons behind it are:

We know that hummingbirds cannot do well when they are hungry and, thus, need their feeders to be refilled frequently; it justifies one of their reasons to be aggressive. On the other hand, their feeling of danger while noticing a new human can be uprooted by learning to gain their trust.

While birdwatching, you must have noticed that hummingbirds are quite aggressive towards their own species. Ever wondered why? Well, one major reason behind it is the insufficiency of feeders.

Hummingbirds need to have an abundant food supply in order to fulfill their energetic lifestyle. Therefore, when a number of hummers are hovering over a single feeder, they can easily behave aggressively towards each other.

To comfort the hummingbirds, you must follow these methods:

Make sure you have abundant food sources in your yard by planting flowering plants and setting up multiple feeders. Additionally, if your feeders have multiple ports, that’s even better for these birds since they can keep one port for themselves. This not only helps the hummingbirds feel less threatened by their own kind but also helps them fulfill their appetite in peace.

You must keep rotating the feeder as the food gets consumed by the birds. This is even more essential in the case of the hummingbirds since these birds are constantly feeding themselves and preparing for flight. Therefore, rotating and refilling the feeders at intervals can help the birds consume their food whenever they need it.

If you can take care of these things, you will never see the hummers behaving aggressively towards you or one another in your yard.

With this, we come to the end of this article. Today, we’ve learned a lot about hummingbirds’ nature and behavior, both among themselves and with humans.

These curious little birds have a surprisingly large brain with a strong memory that enables them to remember people they see on a regular basis. This is why it’s most common for them to be familiar with the birders from whose yard they feed.

We also learned how aggression is quite common in their species and generally rooted in issues revolving around the unavailability of sufficient food. Therefore, the best way to keep them happy and cheerful is to add multiple feeders for them in your yard and keep rotating them every now and then.

Can Hummingbirds Open Their Beak?