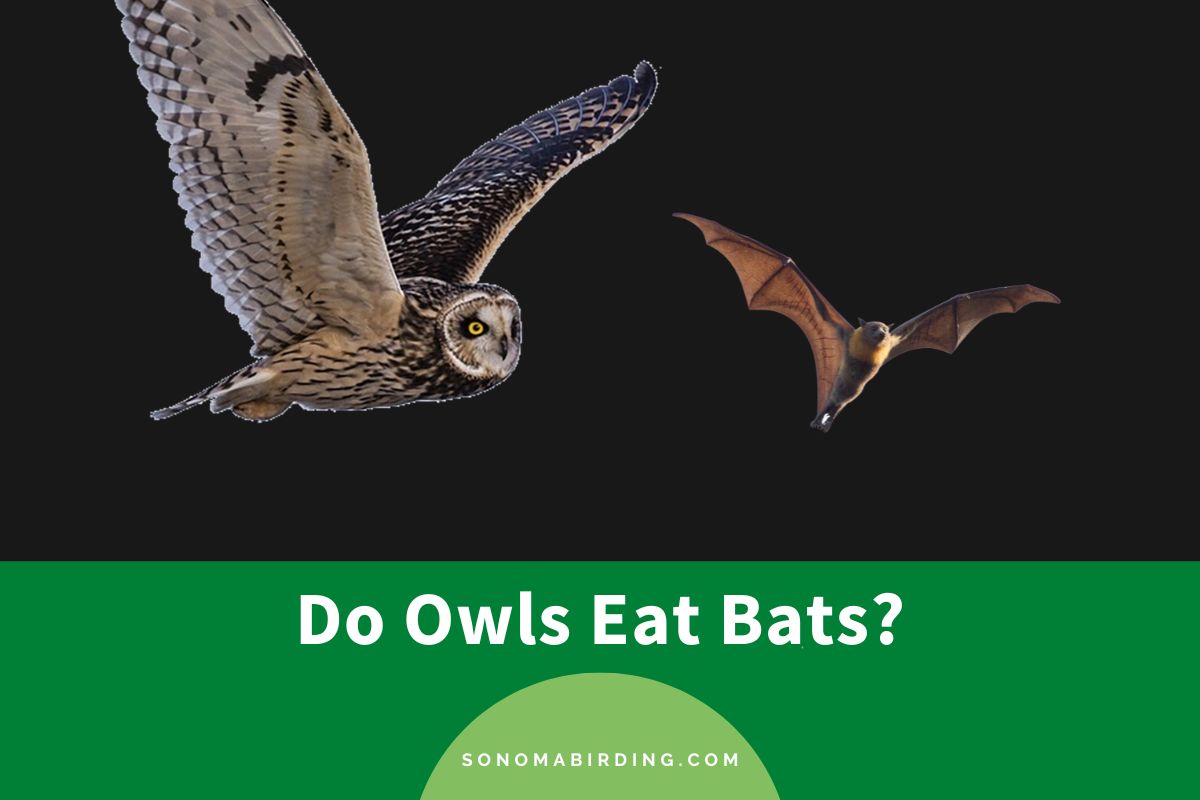 Due to their nocturnal schedule and blood-sucking tendencies (which is only true for vampire bats), bats have quite an ill-repute among humans. These hideous-looking mammals appear scary to many of us, which is why we wouldn’t want them around us. Owls are nocturnal predators, too, and are known for their ability to swoop down on prey and snatch it up in their powerful talons. But there’s a lot of debate about whether or not owls actually eat bats. If you’re wondering the same, let’s find out!

Can owls eat bats? Yes, owls can eat bats. Although the hunting techniques used by owls are not suited to catching bats, they will not hesitate to pursue these flying mammals in the unavailability of their primary food sources. Some owl species that commonly go after bats include Barn Owls, Great Horned Owls, and Barred Owls.

Are you wondering if bats are scared of owls? Or do you want to learn about the owls that feed on bats? Whatever your queries are, they will be answered in this article.

Are bats afraid of owls?

If a colony of bats has begun to roost on your property, cleaning their droppings on a daily basis might’ve become a huge chore for you. Are you trying to get rid of these pesky nocturnal creatures?

Well, we might have just the right solution for you. Have you tried to scare them away by hanging decoy predators in your yard? Using an owl figurine and balloon can help you a great deal.

While owls do not generally hunt down bats, they’re still large and deadly predators that bats are wary of. Therefore, if the bats believe that you have owls on your property, they wouldn’t dare try to encroach on the territory of these territorial birds.

There are over 200 different owl species in the world, and all of them have varying diets based on their geographical location, food availability, and many other factors. Therefore, it’s not possible for all these owls to feed on bats.

However, there are some owl species that commonly prey on bats as their sworn enemies. In this section, we’ll learn more about seven of these owl species. 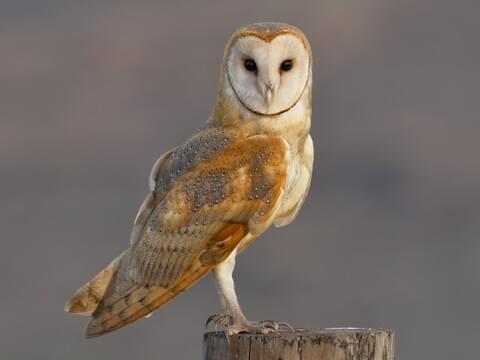 Barn Owls are one of the most widespread owl species that do not belong to the true owl family. These birds have over 28 subspecies, all of which show variation in size and coloration.

These are generally paler on their face and underparts, with brown back, wings, and tail. Their face is shaped like a heart, with a brownish outline, big, black eyes, a small, barely visible bill. 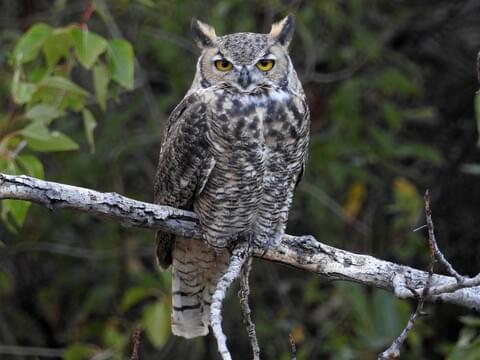 Also referred to as “Hoot Owl” and “Tiger Owl,” the Great Horned Owls are a large American true owl species. These birds have a heavy built, making them the second-heaviest owl in North America.

Great Horned Owls have a mottled brown body with two large ear tufts that appear like horns, lending them their name. They have a large facial disc, with golden eyes and a small, inflexible grey bill.

Do Great Horned Owls eat bats? Although mammals contribute to more than 80% of Great Horned Owls’ diet, bats only make a small part of it. The Free-tailed Bats are the most commonly hunted bats by these owls. 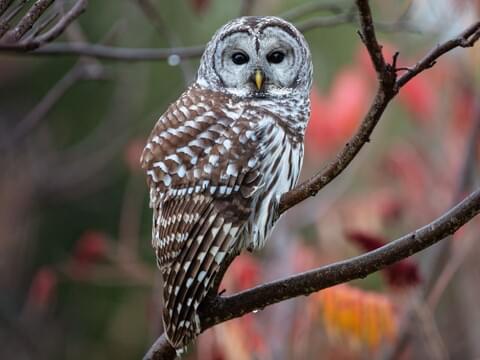 Named after their prominently barred appearance, the Barred Owls are a North American owl species in the Strigidae family. They’re also known as “Striped Owl” and have a mainly grey body with heaving stripes drawn on their undersides, which is clearly visible in flight.

Barred Owls have three recognized subspecies, all of which appear duller in comparison with other owls found within their range. Their eyes are stark black, with a short but deeply hooked bill dipped in yellow.

Do Barn Owls eat bats? Bats are a part of Barred Owls’ secondary diet. These owls are often seen hunting small bats like the Southeastern Myotises. 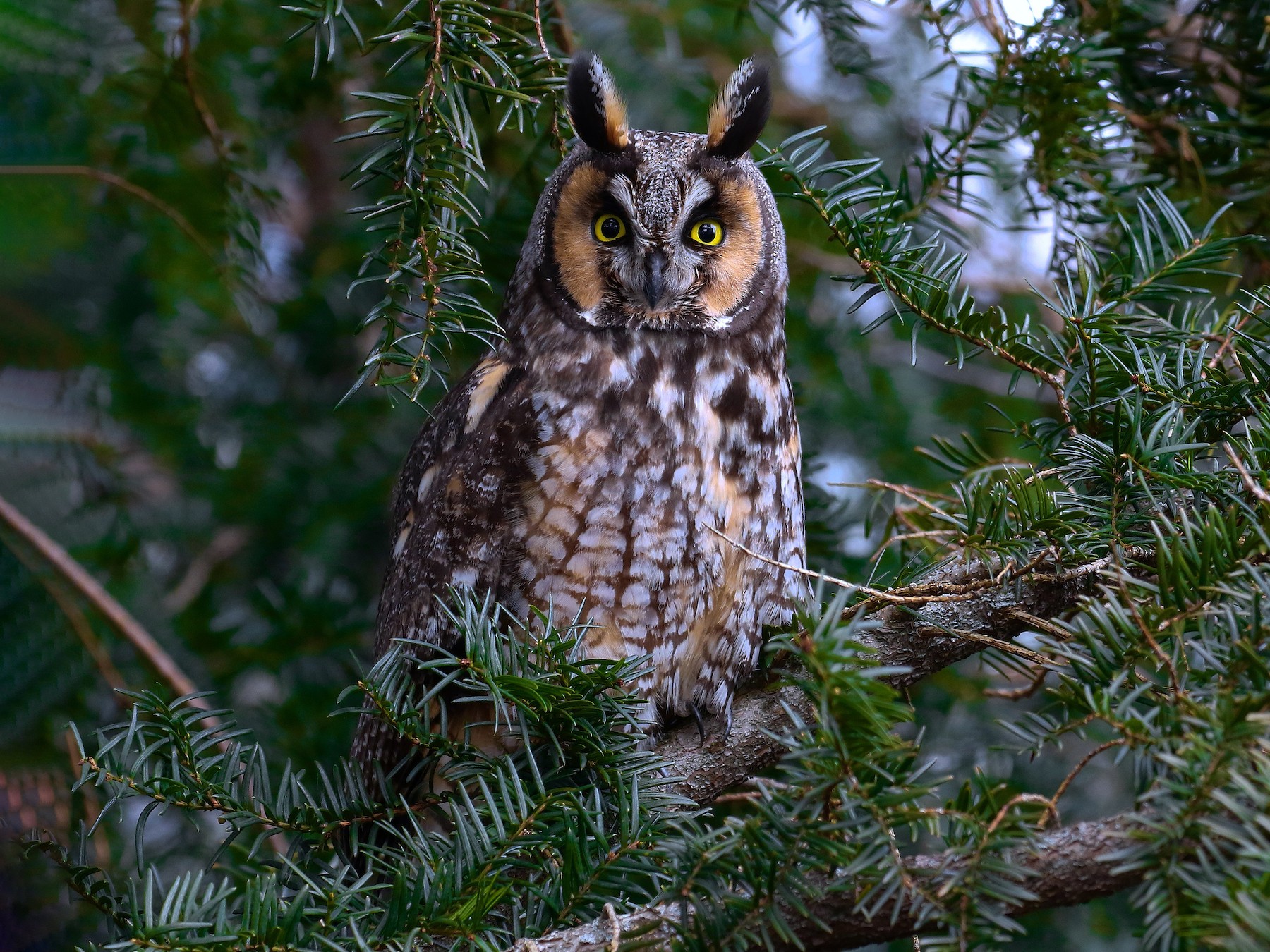 Also referred to as “Cat Owl,” the Long-eared Owls belong to the eared owl group. These owls have a widespread distribution and can be found in Europe and North America.

Long-eared Owls have four recognized subspecies, all of which possess long, slender bodies and prominent ear tufts located close to the center of their head. Although the base color of their body is brown, black vertical streaks are heavily overlaid on it. 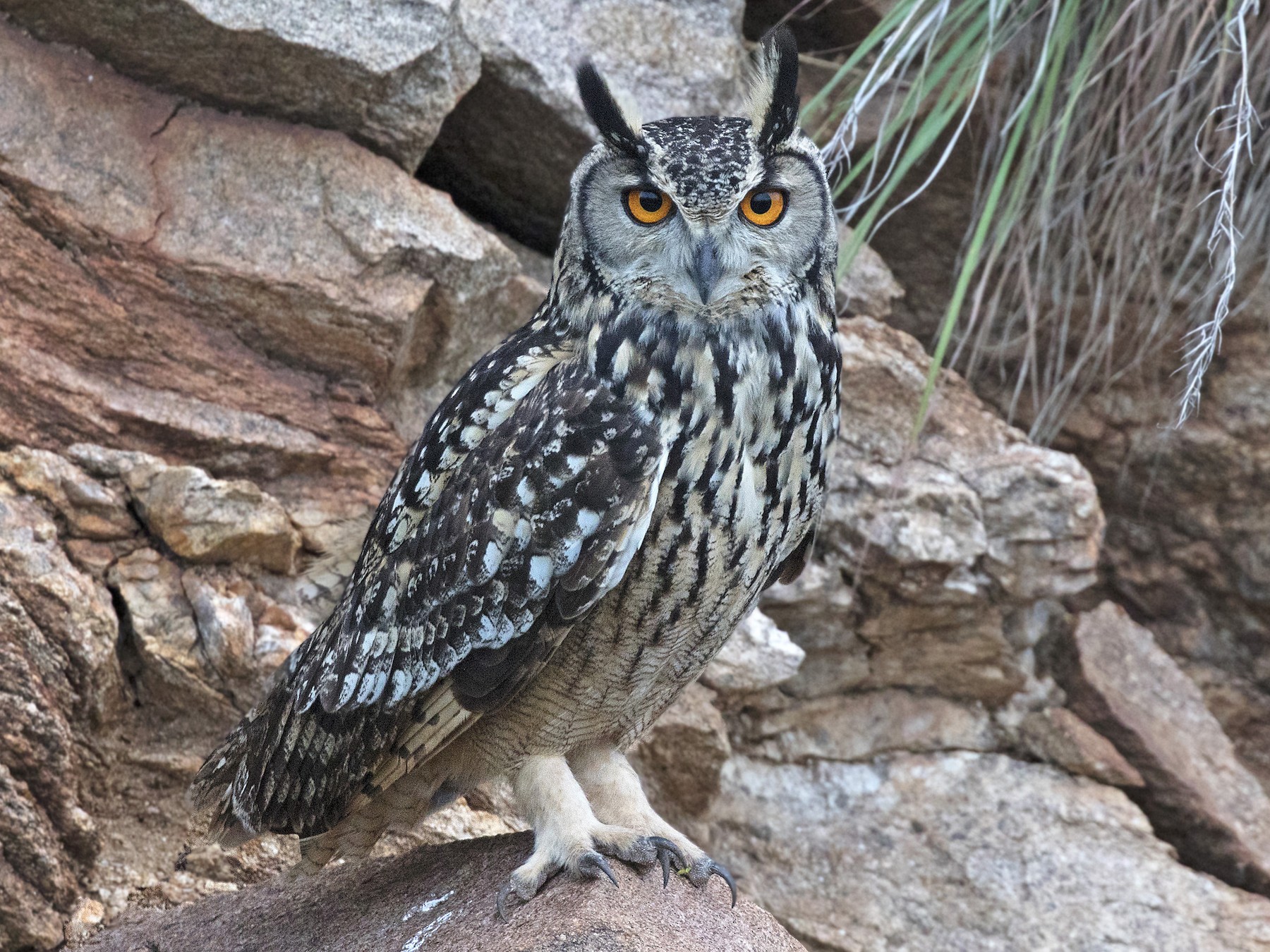 The Eagle-owls, along with the Horned Owls, together belong to the Bubo genus of the owl family. There are 20 extant owl species within the genus, out of which 16 species are eagle-owls.

Although none of the Eagle-owls are endemic to North America, some species might venture here as a rare vagrants. These owls are generally the largest members of the entire owl family, with exceptionally long wingspans, sometimes crossing even six feet. They also possess orange eyes, which sets them apart from other owls.

Do Eagle Owls eat bats? Eagle-owls are mainly rodent-eaters and will only feed on bats in rare cases. Bats make 0.08% of their whole diet. 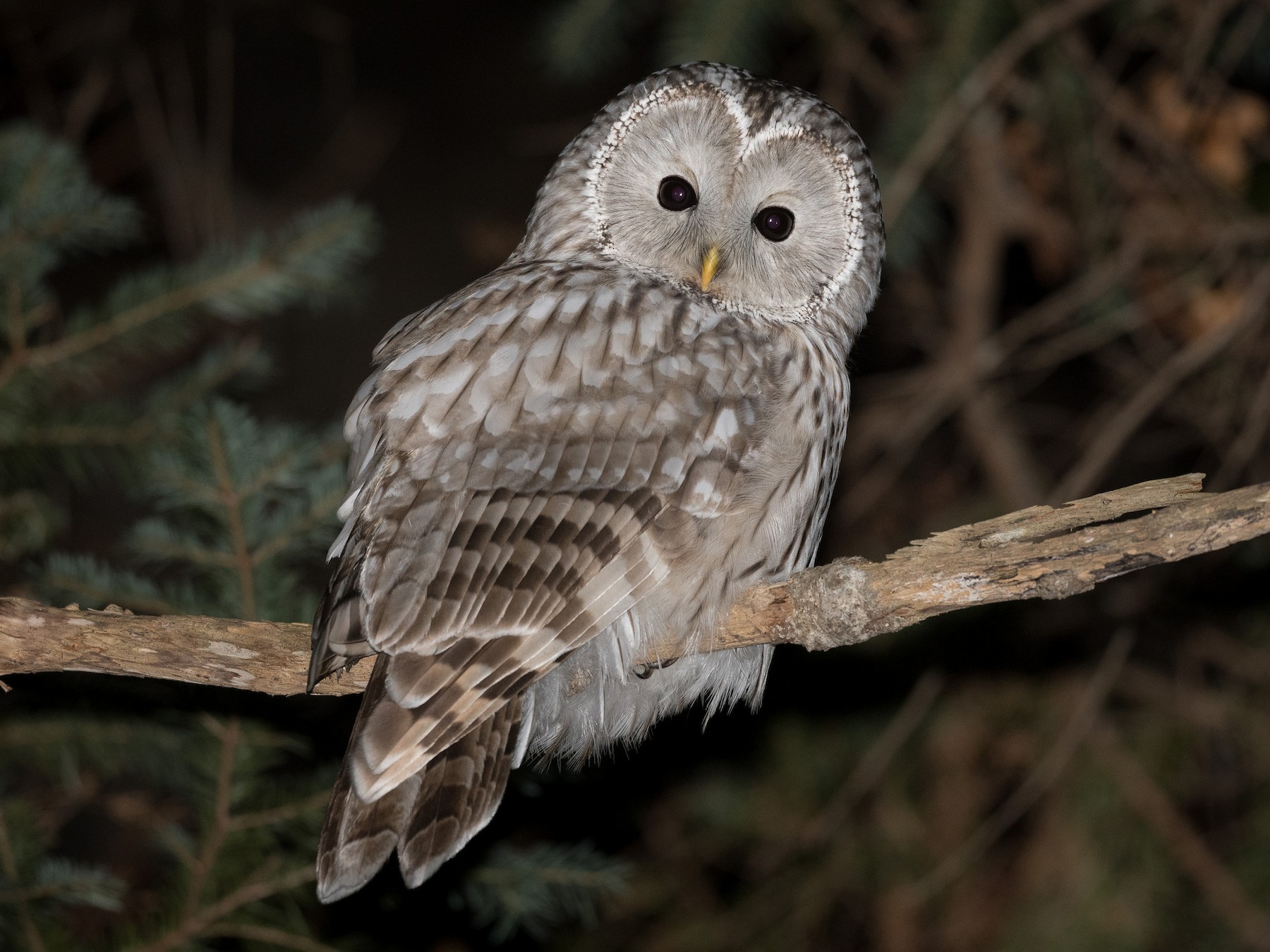 Named after the Russian Ural Mountains, the Ural Owls are a large, nocturnal owl species distributed in Europe, Russia, and Asia. These owls have a large, rounded head with a whitish or greyish overall body and dark markings on their back.

Their underparts are comparatively paler and un-streaked. The adults display a reverse sexual dimorphism in size, with the females being larger than their male counterparts.

Do Ural Owls eat bats? Among the mammals, Ural Owls prefer to feed on shrews and weasels. Bats and Flying Squirrels are secondary to their diet and contribute to only 0.06% of it. Also referred to as “Brown Owl,” the Tawny Owls are medium-sized true owl species found across Eurasia and North Africa. These owls have a rather stocky body with brown upperparts, pale underbody, black eyes, and a yellow bill.

Tawny Owls have large, bulky heads with plain eyes and occur in two color morphs. They have large, rounded wings, which lend them a slow and heavy flight. The adults display reverse sexual dimorphism, with the females being both larger and heavier than their male counterparts.

Do Tawny Owls eat bats? Tawny Owls are not very picky about food and would eat anything they can find, be it rodents, birds, or small mammals. Bats make 0.07 % of their whole diet.

Did you know that owls are not well-adapted to hunt bats? It’s true; bats are not really easy to catch and kill, even for owls. This is why these mammals are not a part of the owl’s primary diet.

However, in case of food scarcity, owls might attack bats. Most species do it when a colony of bats is leaving their roosting space by using the ambush technique to catch a bat or two from the large crowd.

Some diurnal owls also attack bats in their roost during the daytime, when they’re most vulnerable.

It is quite difficult to gather more data about which bat species fall prey to which owls. Therefore, we’ve created a list of bat species that have been known to fall prey to owls most commonly. Take a look:

Bats, although they’re efficient pest-killers, are not the creatures you’d want lurking around your home. These mammals are not just hideous in appearance but are also potential transmitters of dangerous diseases and infections.

If you’ve got a bat problem on your hands, you can try handling it by hanging owl decoys around your property. If bats are convinced that owls live on your property, they will certainly stay away from it.

Do Owls Have Eyeballs?