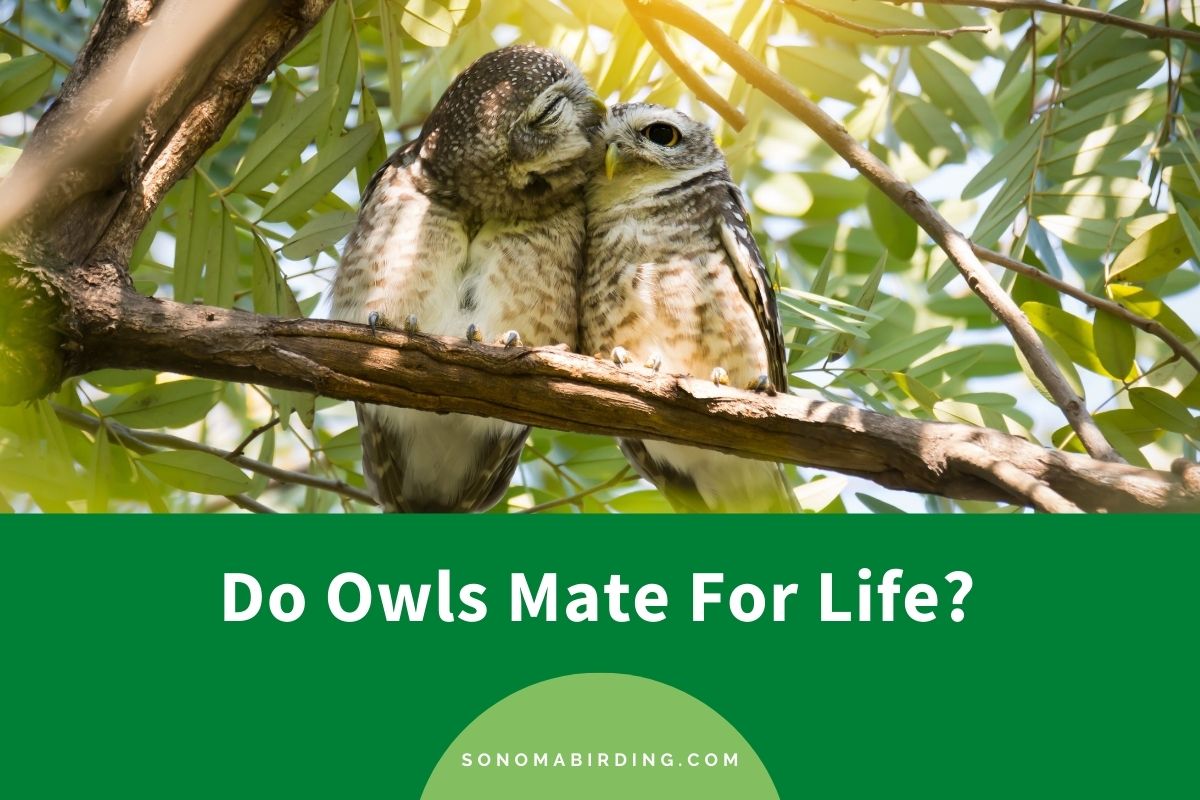 When we hear the term “lovebirds,” which bird comes to your mind first? Most people would take the names of swans, pigeons, or maybe even penguins. But what many of you might not know is that many birds of prey also tend to mate for life and are quite protective of their partners. But which raptors are these? What about owls? Do they mate for life?

Do owls mate for life? Yes. As a general rule, almost all owl species are monogamous. Although the migratory species might not stick together all year-round, they return to the same nesting site every breeding season to reproduce and raise their brood. Some exceptions to it are the Great Horned Owls that often change their partners after five years.

In this article, we will learn all about how owls mate and their reproductive and nesting behavior. Later, we will also learn which owl species tend to mate for life and which are monogamous just for a season.

Do all owls mate for life?

Most people, when they wonder about birds mating for life, think of the whole group of birds and not individual species. However, there is no right “yes” or “no” answer to questions like these. Although all members of the owl family share many similarities, they do have their individual differences as well.

As a general rule, owls are considered monogamous birds, much like the other birds of prey. However, in some species, polygamy has been noticed; the Boreal Owls and Eurasian Eagle-owls are examples of such species.

But even in these species, polygamy is nothing more than a rare occurring. A major part of their population is still strictly monogamous.

When do owls reach their sexual maturity?

As all birders know, the family of owls is extensive, with over 200 different species distributed all across the world. All of these birds have different lifespans and maturity ages.

In the wild, the Barred Owls survive up to 8, or at most ten years on average. However, in captivity, these owls can even live to be 23-24 years old.

Because the Barred Owls have an impressive lifespan for an owl, their sexual maturity tends to come a bit late. Both male and female Barred Owls become sexually active at the age of 2 years. Barred owls generally breed annually. However, if their first brood is lost, the pair might raise another brood.

Do Barred Owls mate for life? Yes, Barred Owls are strictly monogamous and tend to stay with their partners for life.

Although the Barn Owls have an average lifespan of about 3-4 years in the wild, they can survive for over 15 years in captivity. The unfortunate truth is, most of these owls die quite young.

Both sexes of the Barn Owls are ready to breed at the age of 10-11 months. These owls generally breed only once a year; only 10% of pairs are seen raising more than one brood per year.

Do Barn Owls mate for life? Yes, they do. Barn Owls return to the same nest year after year, breeding and nesting together for the entire season.

Under captivity, the Great Horned Owls are known to live up to 20-25 years, with the maximum record being 29 years. However, in the wild, most owls die by the time they cross their 13th year.

Both sexes of the Great Horned owls reach sexual maturity at the same time when they turn two years old. These owls also raise a single brood annually.

The Western Screech Owls have a typical life span of 6-8 years in the wild, with the maximum record set at 13 years. In captivity, they tend to live roughly 5-6 years longer.

Western Screech-Owls are among those that mature relatively early in life. Both sexes are ready to breed at the age of 11-12 months. These owls breed every year.

Long-eared Owls have an average lifespan of about ten years in the wild but can live up to 27 years in proper care and nourishment.

Like the Western Screech Owls, Long-eared owls also reach their sexual maturity right before crossing a year. These owls raise only a single brood in a year.

Do Long-eared Owls mate for life? There’s very little info about these owls’ breeding patterns, so you can’t be sure about them mating for life. However, these birds generally stay monogamous throughout a single breeding season.

How do Owls mate?

Just as their lifespan and sexual maturity, all owls’ breeding seasons and patterns are also different. In this section, we will learn about the mating and nesting behavior of all five owls mentioned previously.

How do Barred Owls mate?

The breeding season of Barred Owls occurs between March and August, although the courtship ritual begins earlier, in February. In February, the second-year males begin to look for a prospective female mate, presenting elaborate performances to lure them.

The courtship rituals of males include producing various hooting and screeching calls, sliding down branches, and swinging back and forth with their wings raised. Once a female responds to a male, the new couple engages in preening each other’s feathers and feeding.

Right after the courtship ritual ends, the pair mates and begins to prepare for their eggs. These owls prefer to nest in well-hidden areas within the woods, near a water source. Once a nest has been constructed, the female lays about 2-4 eggs, all white, round, and rough-textured.

These eggs are incubated for the next 28-33 days, and the males bring food for the females during this time. Once the eggs hatch, both parents care for their fledglings for about four weeks, after which they’re capable of looking after themselves.

How do Barn Owls mate?

The breeding season of Barn Owls varies in different parts of the world. In North America and Europe, their mating and nesting occur between March and June. The male Barn Owls begin their courtship rituals a little before March.

In order to attract a female partner, males display various flight performances, in addition to producing advertising calls and chasing the prospective females. They also fly right in front of the females, displaying a “moth flight.”

If the female consents to mating, it will screech to the males, responding to their calls and confirming their affirmation.

Once both partners are ready to breed, both partners search for a nesting site together, during which they mate every minute. The copulation begins with both sexes crouching down to express their consent, after which males mount the females and grasp their necks.

Rather than building themselves a new nest, the Barn Owls prefer re-modeling an old, abandoned nest. Before laying the eggs, the female lines this old nest with fresh, shredded pellets. Then, they lay about 4 to 7 eggs inside it. These eggs are elliptical in shape and have a chalky white color.

Barn Owls’ eggs require incubation of about 29-32 days before they’re ready to hatch. Upon hatching, the parent owls tend to their little hatchlings for the next 25 days, feeding them protein-rich meals for their healthy growth.

After the 26th day, the fledglings feed on their own but choose to remain in the nest until they can fly. These little owls take their first flight when they’re about 50-70 days old.

How do Great Horned Owls mate?

Of all the owls found in North America, the Great Horned Owls are one of the earliest breeding owls. Their courtship rituals take place between October and December so that breeding and nesting can occur in December and end by February.

The males seduce a female partner by flying up and down in front of them, bowing with drooping wings, and hooting to them. If the female is interested in breeding together, they will hoot back.

Once a pair is formed, they also engage in bill-rubbing and preening. During this time, the males also bring fresh prey to share with their partners.

A pair of Great Horned Owls enjoy mating for a long time (about a month) before they choose to reproduce. Once their mating is over, the male gets the responsibility of selecting an ideal nesting site.

Because these owls are quite large in size, these owls prefer large, open nests to ones hidden between tree branches. They choose an abandoned nest and add a new lining to eat before the females lay their eggs.

The female Great Horned lays about 2-4 eggs in a brood; the first-laid egg is usually the largest, while the last one is the smallest. These eggs require an incubation period of about 26-35 days.

How do Western Screech-Owls mate?

The Western Screech-Owls breed in the months of March to May, with the males performing elaborate rituals to attract a suitable partner. They sing to the females from different branches, bobbing and swiveling and until they’re face-to-face.

If the female is attracted, they will move closer, rub their bills together, and preen each other. The pair begins mating soon after that.

After mating, these owls choose a nesting site. They’re primarily cavity-nesters and will either pick a naturally large cavity or one created by the woodpeckers. The female Western Screech-Owls lay their eggs on the sawdust floor of the cavity.

About 3-5 eggs are laid by them at once; all of these eggs are white and similarly sized. The incubation of these eggs lasts for about 30 days. Once the eggs hatch, the female partners brood the fledglings while the males bring food for them.

The fledglings stay with their parents for another 3 weeks until they learn to fly and look after themselves; once three weeks are over, they will fly off the nest.

How do Long-eared Owls mate?

Although the breeding season of Long-eared Owls occurs between March and May, the males secure a nesting site beforehand. It is only after conquering the nesting territory that the males court a female partner. They do it by flying gracefully around their nests, flapping, and gliding in between.

When a female selects a nest, she also expresses her interest by display flight. Mutual preening marks the end of their courtship, after which they mate.

The female Long-eared Owls protect their nest more fiercely than the males. Before laying the eggs, they line their nest with leaves, moss, and bark strips. The females lay about six eggs; these eggs require a significantly lesser incubation time and will hatch in merely 10-12 days.

Both owl parents care for their fledglings for five weeks, after which they abandon the nest and reside with other juveniles.

Why do Owls mate for life?

If you’re assuming that owls are romantic birds simply because they mate for life, you might be wrong. These birds of prey stick with the same partner for purely logical reasons:

Conclusion: Do Owls mate for life?

While owls are not the typical birds we think of loyalty and monogamy, these raptors might just surprise you. More than 90% of the entire owl population is monogamous and mates with the same partner for as long as they live.

Only some owl species might break off their pair after 5-6 years. But even these species stay away from polygamy. Instead, they take a clean divorce and look for a new partner.