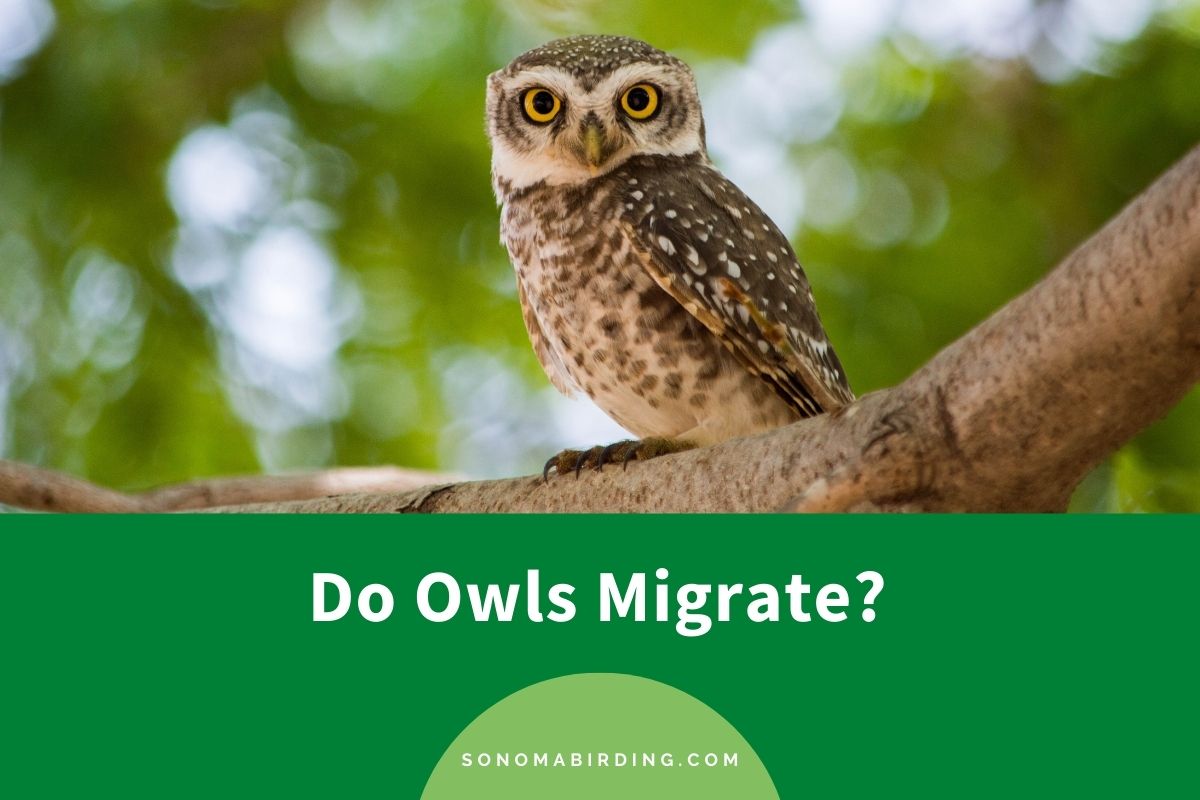 Owls are the most fluffy-looking members of the entire raptor family. But don’t judge these nocturnal creatures by their appearance; they’re just as lethal as the hawks and eagles, if not more.

In fact, their silent flight style and nocturnal nature make them even more dangerous than other raptors. But how much do you really know about owls? Do you know if they’re migratory or resident birds like most raptors?

Do owls migrate? The family of owls consists of both resident and migratory species. In fact, some owls are neither resident nor migratory and tend to wander far distances at irregular intervals like nomads.

Today, we will talk about some of the popular and widespread owl species that are either migratory or sedentary. We’ll also discuss how they migrate and the measures they take to survive the harsh climate in winters.

Do all owls migrate?

No, certainly not. Owls, as a collective group, are generally sedentary. Once these birds of prey have found their mates, they choose to stay in their breeding ground year after year rather than flying off to other locations.

Some owl species have figured out several lofty methods to avoid migrating during winters, while other, generally smaller species, find it easier to travel south to escape the cold temperature.

Moving ahead in this article, we will discuss at length the owl species that migrate and the ones that don’t.

How do different owl species migrate?

All birds have different migratory patterns. And while you can find similarities in the migration of songbirds, owls are altogether different from them. So, how do these raptors migrate? That’s what we’re going to talk about here.

But before we move on, it is important to note that not all owls mentioned in this section are fully migratory. Many of them travel outside of their breeding range in patterns not yet fully understood by ornithologists.

We’ll do our best to break their movements down to answer all questions of your curious minds.

How do Snowy Owls migrate?

Also referred to as “Polar Owl” and “Arctic Owl,” the Snowy Owls are a vulnerable true owl species found in the Palearctic and the Arctic parts of North America.

As their name suggests, these owls are quite used to living in extremely cold conditions all year round. Therefore, it wouldn’t make sense for them to move south during winters, would it?

Well, you’re partly right; while Snowy owls are highly migratory, cold is rarely a motivation behind their movement. In fact, they’re rightly called “nomadic” and not “migratory.”

Snowy Owls have a peculiar tendency of moving to a different location every breeding season, rarely mating with the same partner or nesting in the same nest twice.

Many individual owls of this species have often been found wandering all around the Arctic at irregular intervals. Some of their populations are also engaged in a southward irruption in large numbers.

How do Barn Owls migrate?

Popular for their unique, heart-shaped face, the Barn Owls have an extensive distribution, making them the most widespread landbird species worldwide. These owls can be found in Europe, Africa, the Americas, Southeast Asia, Australia, and many Pacific islands.

Although Barn Owls have been a sedentary species for a long time, in recent years, the southward dispersal of their northernmost population in the winter months has been noticed.

Within the United States, these owls do not travel further than 200 miles from their breeding grounds on average. However, the migratory journey of these owls to escape harsh winters is not as safe as they’d like it to be.

While migrating, barn owls fly much higher than the regular, foraging owls. This elevation in height makes them vulnerable to wind turbine collision. However, it’s a chance these owls readily take when faced with extremely cold temperatures.

Apart from winter migration, you can also notice the first-year Barn Owls dispersing during fall. Their journey is not to escape the cold but to search for a permanent residence.

How do Elf Owls migrate?

As their name suggests, the Elf Owls are one of the smallest owl species in the world, being as large as a sparrow. These tiny owls have a greyish-brown plumage and prefer to nest in natural or woodpecker-made tree cavities.

Elf Owls breed in the Southwestern United States and the Baja California Peninsula. They’re insectivores, feeding exclusively on insects and other invertebrates. During winters, it becomes difficult for them to find food, which is why they need to migrate.

Elf Owls migrate to the central as well as southern parts of Mexico in winters, where they can find warmer climates and plenty of food. These owls are generally solitary but form large flocks during migration. They spend a significant amount of time on their wintering grounds, returning north around May.

How do Flammulated Owls migrate?

Flammulated Owls are a tiny North American owl species that resemble the Western Screech-Owls to an extent; only they’re smaller and lack ear tufts. These little owls breed in the western parts of the United States, extending up to Central Mexico.

Due to their secretive nature, we still lack sufficient data about the migration of Flammulated Owls. Additionally, Flammulated Owls migrate during nighttime, which is perhaps a preventative measure from their predators.

The population that inhabits the northern half of their range are migratory and travel to Central America for winters.

The juveniles often leave for migration earlier than the adults, sometimes as early as August. The adult Flammulated Owls stock up on food (and gain considerable weight) by October when they’re ready to leave.

How do Burrowing Owls migrate?

The Burrowing Owls are tiny owl species that have relatively long legs and roost in burrows. These birds have 18 recognized subspecies and reside in North and South America.

These owls leave their breeding grounds in fall to reach the wintering destination by the time winter approaches. Their return north is seen in late spring.

How do Northern Saw-whet Owls migrate?

Being the smallest owl species in North America, the Northern Saw-whet Owls are a true owl species that inhabit the dense thickets within their range. These tiny owls are not larger than the robins in size, with both sexes having an identical plumage.

Some populations of Northern Saw-whet Owls are permanent residents, while others are migratory, flying down to lower elevation areas during winters. Just like the Flammulated Owls, these owls also tend to migrate during the night. It is for this reason that very little is known about their migratory behavior.

There is another peculiar nature noticed in the Northern Saw-whet Owls. Once in every four years, a large population of these owls irrupt southwards, but not necessarily during winters. The ornithologists are still confused about the intent behind this movement.

How do Long-eared Owls migrate?

Also referred to as “Cat Owls,” the Long-eared Owls are medium-sized owl species that have a widespread distribution in North America, Europe, and the Palearctic.

These owls reside in semi-open habitats such as forest edges. They feed almost exclusively on voles and other rodents.

Long-eared Owls are partially migratory, with only their southernmost population being sedentary. Their northern population travels long distances during winters, maintaining a strictly nocturnal routine on their journey.

Some individuals of this species have also been found wandering far off outside of their migration seasons, which is why they’re considered nomadic.

How do the non-migratory owl species survive winters?

As you might have seen in the last section, only a handful of owl species are reportedly migratory. So, how do the owls that remain on the breeding grounds survive the harsh winters? Let’s find out.

Barred Owls are also known as “Striped Owls” due to their heavily striped underbody. These owls have a drab appearance in comparison to other North American owls.

How do Barred Owls survive the winter? During winters, the Barred Owls face a serious shortage of food sources due to the cold and snow.

To combat this, these owls adapt the hunting technique of Great Grey Owls, called “dive-plunging.” The Barred Owls dive into the snow to catch rodents like voles from their hidden snow tunnels with this technique.

The Great Horned Owls are a large American true owl species that are closely related to the Eurasian Eagle-owls. These birds have a camouflaged plumage, with mottled brown upperparts and paler underparts, covered in brown horizontal stripes.

Great Horned Owls have more than 12 recognized subspecies, and all subspecies possess large tufts called “plumicorns” that give them a horned impression.

How do Great Horned Owls survive the winter? Like the Barred Owls, the Great Horned Owls also face food scarcity during winters. However, they tackle this issue by limiting their diet and conserving energy by staying put in their nests as long as possible.

While the adult Great Horned Owls rarely leave their breeding grounds even in the coldest temperatures, the juveniles that have not mated yet don’t feel any such obligations. These first-year owls might be seen traveling to warmer areas with more food options.

Tawny Owls are a stocky true owl species that are found in Eurasia and North Africa. Although these nocturnal birds of prey are mainly rodent-eaters, they also hunt other, smaller owl species occasionally.

The Tawny Owls have a medium-sized body, with a relatively large, round head, and occur in two color morphs. Adult females are both larger and heavier than their male counterparts.

How do Tawny Owls survive the winter? The summer diet of Tawny Owls consists of rodents and birds, at times even other, smaller owls species as well. However, in winters, they feed almost entirely on Field Voles, the only rodents they can easily find in colder climates.

Being the monotypic member of their genus, the Northern Hawk Owls are a diurnal owl species occurring in the northern Holarctic. These owls have three recognized subspecies, occurring in North America, Eurasia, and Serbia.

As their name suggests, Northern Hawk Owls closely resemble hawks in appearance, flight style, and behavior. These owls have a dark brown plumage with a whitish underbody and brown bands on their chest and belly.

To deal with it, they catch birds like grouses and ptarmigans to feed on as a supplement. These birds are easier to catch for them and are more readily available in colder temperatures.

Now that we’ve reached the end of this article, I’m sure you’ve learned many new and interesting things about migration among the owls.

While these birds of prey are quite deadly, even they are not invulnerable to the harsh temperatures of winters. If the cold wouldn’t get to them, the unavailability of food is bound to pose a challenge.

Under these circumstances, different owl species adopt different methods suited to their needs. Some migrate, while others choose to get more creative.