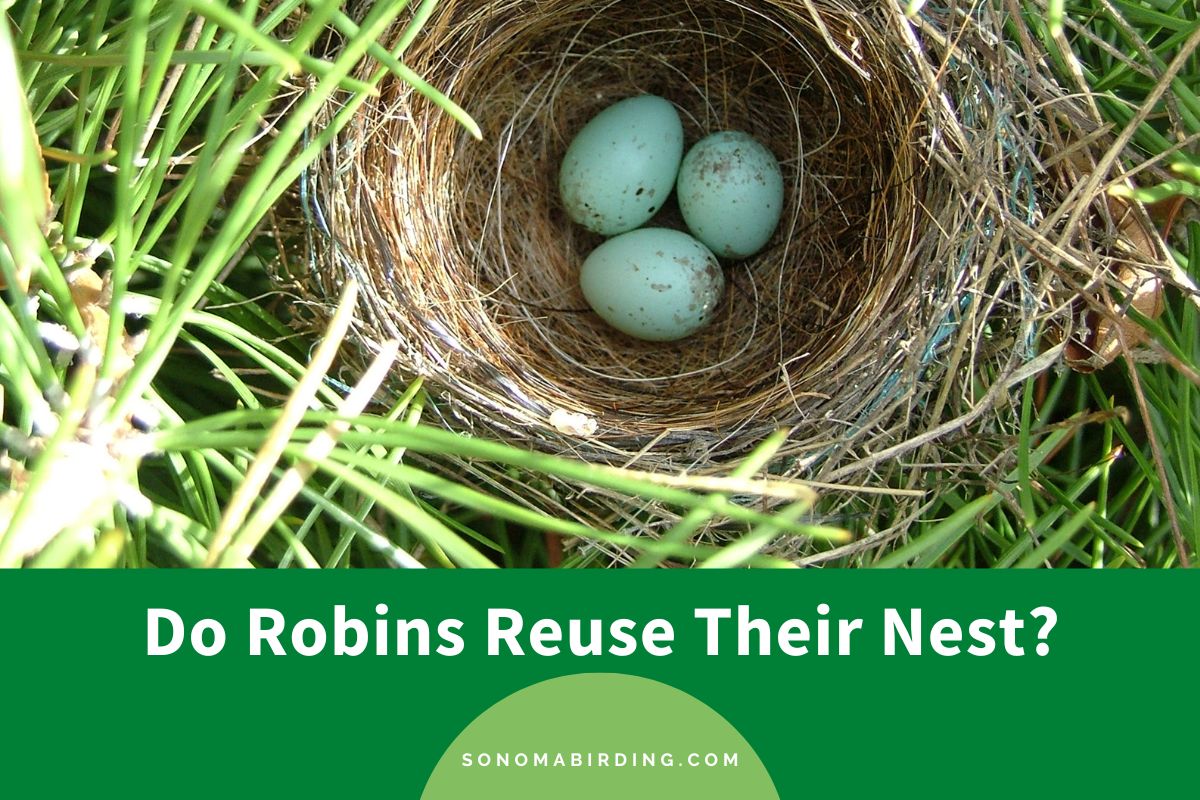 The Robins are a migratory songbird species and one of the most fascinating creatures in the avian world. The male robins are popular for their melodic songs; their songs are the last things most of us hear in the evening as the sun sets on the horizon. These birds often feed on fermented berries and behave drunkenly. Among many interesting questions surrounding the lifestyle of these birds, today, we will be talking about their nesting habits.

Do robins reuse their old nests? No, Robins don’t reuse their nests. Instead of returning to their old nests every breeding season, they prefer to build a new one. However, if these birds find an ideal nesting location, they might consider building a new nest near their old nest’s structure.

Do you have a robin nest in your garden and are wondering whether or not you should move it after the birds have left it? Or are you an amateur birder curious to understand the nesting behavior of these birds? Either way, you’ve come to the right place.

Read on to learn the answers to all your questions in this article.

Where do Robins build their nest?

Before we move on to discussing robins reusing their old nests, let’s first cover the basics about where and how these birds build their nests.

The first and foremost requirement for an ideal nesting spot among the robins is a place with proper coverage. These little birds are not strong enough to fight off any predator that might come looking for their eggs, which is why they look for a safer location.

These birds ideally look for hollows in tree trunks, climbing plants, piles of logs, hedgebanks, and other tight spaces to build their nest. When nesting in trees, they often go for conifer trees like spruce or pine.

How do Robins build their nest?

The first thing you need to know about the nest-building habits of the Robins is that the female robins are the ones that do all the work. They’re in charge of the entire nest-building job, from beginning to end. However, both sexes look for the nesting materials together.

The mother robin lays 2-4 eggs in a single brood, laying an egg a day. However, they will not start roosting these eggs until all of them have been laid. It is done so that all eggs hatch at the same time.

Once the female robins start roosting their eggs, they take about 12-14 days to incubate. After the incubation period, the eggs hatch, and fledgling Robins come out of it. These babies will stay in the nest for the next 12-15 days.

Robins’ nests are shaped like a cup large enough to hold their eggs as well as the fledglings, protecting them against the weather and keeping them warm until they’re old enough to fly out.

The basic materials of their nests are mud and twigs, while grass, feathers, moss, rootlets, and stray paper are used for lining them. Their nests are usually located at a height ranging from about 5 to 25 feet above the ground.

Once the outer structure of the nest is constructed, the female robin uses soft mud from worm castings to make a sturdy and heavy nest. After the completion of nest-building, their nest is usually 6-8 inches across and 3-6 inches high.

Do Robins use the same nest next year?

Do you also have Robin’s nest on one of the trees on your property and are wondering if you should throw it away or let it stay? In that case, you have no reason to worry. We’ll answer your question here.

As many birders might already know, Robins are one of the songbirds that raise multiple broods in a year, leading to their abundant population.

These birds generally raise two broods in a year, but you can expect them to raise even 3-4 broods in a good year. This is also the reason behind their long-stretching breeding season, ranging from April to July.

Due to their multiple broods, the robins also build several nests at the beginning of their breeding season so that all of their fledglings can safely inhabit the separate nests.

With all that being said, the adult robins don’t use the same nests next season. They’re quite happy to repeat the nest-building ritual next year and rarely return to breed in their old ones.

However, in some rare cases, the baby robins have been found to return to these nests in their second year. And if the nests are still strong enough for them, they will breed in them.

Do Robins return to their old nests?

While some juvenile robins inherit their parents’ nests, not all of them return to stay. Some of these babies also tend to return to their nests out of nostalgia. After all, it is a place where they were born and cared for; some even hope to see their parents, which never happens.

What happens if you move Robin’s old nest?

All of you who have Robin nests that you need to get rid of might be thinking that you can now do it safely. However, you shouldn’t reach any conclusion right away; there’s still much left to learn regarding these birds and their nests.

It is a well-known fact that an empty robin’s nest, or any bird’s nest for that matter, is merely an invitation for the parasites. And if parasites are infesting the nests on your property, the infestation could even spread in your family, posing a major health hazard.

However, technically, you’re not legally allowed to do so. It’s because of the Migratory Bird Treaty Act of the US. This treaty provides protection to most birds, including the robins. It prohibits any resident of the country from moving or destroying the nest of any bird on their property.

But for people’s convenience, these rules are followed strictly only for the active bird nests. Once the birds and their babies have abandoned the nest, you can certainly move it far from your property if you consider one thing.

You must first check the old nest thoroughly to see if an egg has been left behind. If you move an active nest to a different location, the mother bird will assume that a predator has tampered with it and abandon it immediately, along with the eggs inside.

Lastly, if any bird’s nest is on your property without posing any threat to you or your family, there’s no reason for you to destroy it or move it away.

All birders would agree that providing a wild bird with a home is one of the noblest things you could do. However, providing this task is not as easy as it sounds.

Most people tend to think that simply purchasing a bird box can accomplish the goal, but that’s only the first step.

Placing it correctly, attaching it firmly, and protecting it from predators are all equally important factors that you need to keep in mind while setting up the bird box. And while all of it might sound hectic, the satisfaction that sheltering the birds will bring you, in the end, is priceless.

But before we talk about setting up bird boxes for robins, let’s first talk about whether or not robins will inhabit these boxes.

Will Robins nest in bird boxes?

This is a tricky question since the chances of a robin nesting in your bird box are purely coincidental. However, there are a few tips and tricks that can definitely increase the probability of it.

While most songbirds prefer to build their nests at least 3-5 meters above the ground, the ideal nest height for robins is 1-2 meters. And although a distance of 1-2 meters off the ground may sound like a risky decision, this is the ideal take-off height for these birds.

As we have already mentioned earlier, Robins usually like to nest among proper coverage, preferably natural.

Instead of an exposed pole in the middle of your backyard, you should put up the bird box in a more concealed space, such as among the ivy and other climber plants, or simply behind tree branches.

While it is highly improbable, sometimes Robins may not nest in your bird box even after you have followed the steps mentioned above.

Now, as we have mentioned before, the largest part of a robin nesting in your bird box is pure luck. However, a more plausible reason may be that robins simply prefer using natural structures to manmade ones when looking for a place to nest.

Some specific nesters in the market are made to avoid this problem; they are natural-looking, with a large entrance.

What to do with the bird box after the robins have left it?

Suppose the Robins do nest in your bird box; congratulations! However, as you must’ve gathered by now, these birds are not there to stay. Once the breeding season ends, they’ll leave for their migratory journey and are unlikely to return to it.

The main question now is, what to do with the bird box? Well, you should clean it thoroughly, to begin with, removing all the nesting materials. After cleaning, you can set it up again to offer shelter to the wintering birds.

So, returning to our initial question: do robins reuse their nests? No, they don’t. Like many other songbirds, robins also tend to build new nests for their eggs every year and rarely return to the old ones. If you have a robin nest on your property, you can discard it.

8 Birds That Build Mud Nests (with photos and videos)