All of us have seen swans at least once in our lives. These pristine, majestic birds are truly a wonder to marvel at. Swans are impressively large and are rumored to have quite the temper, especially when their younger ones are threatened. But do these hot-headed birds have teeth? Let’s find out.

Do swans have teeth? No, swans don’t have teeth. Swans are waterbirds belonging to the Anatidae family, along with ducks and geese, and all of these birds don’t have teeth. However, they have serrated edges around their beaks, which can give the impression of teeth. These jagged structures are called lamellae and are used to hold on to algae and catch slippery creatures like frogs and fish.

Contents show
What does a swan’s bill look like?
Do swans have teeth on their tongues?
Do swans hurt humans?
What do swans eat?
Feeding the swans
Foods to avoid
Important points to remember when feeding swans
Conclusion
Related Articles 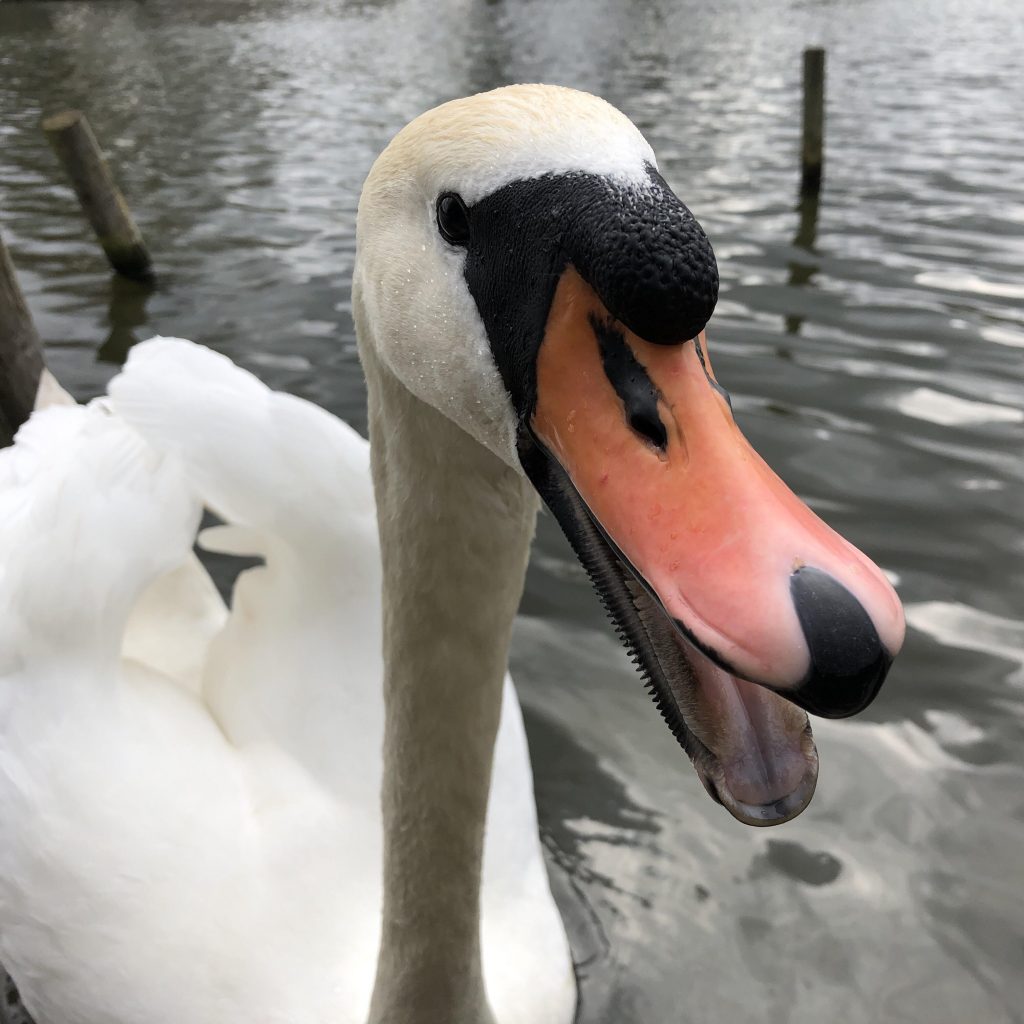 As we have mentioned before, unlike humans and most other mammals and animals, swans do not have teeth to chew their food. Nonetheless, a swan’s bill has undergone many specialized adaptations to make it easier for them to manipulate and eat their food.

A spatulate built: as you must have noticed, the bill of a swan is elongated and flattened. The structure of their bill helps them in crushing their food since they don’t have teeth to help them in doing so. However, the bill lacks the strength to grind super-tough food, unlike teeth. The spatulate build also filters the food from water or mud.

Lamellae: While the functions of lamellae in swans are the same as teeth, you’ll be surprised to know that they are made from the beak itself. Another factor that differentiates lamellae from teeth is that they do not contain enamel, which is a protective layer covering the teeth of humans and other mammals.

Instead, they contain cartilage, the same connective tissue human ears and noses are made of. However, that does mean that the lamellae are soft and flexible because a sharp bite can even draw blood.

Lamellae are pliable structures and are used for filtering and or straining food from mud and water. They are usually not visible until the swan opens its beak or if the swan has some injury or deformity at the side of its bill, which might expose them.

Nail: If you look closely, you’ll notice a small bump on the bill of a swan. The shape, size, and color of the bump may or may not be the same color as the bill, or it may contrast with the overall bill color. The nail is useful for the birds when they are digging through dirt or mud, looking for small seeds, worms, roots, or other foods.

Do swans have teeth on their tongues?

This is another frequently asked question about the oral structure of swans, however absurd it may sound.

When swans are trying to pull grass out of the ground, they hold it down with their beaks and grip it with their serrated tongues. Then, they swiftly move their head up to uproot the grass.

Their spiked tongue also aids them in holding small prey like rats and insects. Even though the lamellae are not real teeth, they can cause pretty extensive damage to their prey.

As we mentioned in the introduction, swans are known to be quite hot-tempered, especially when it comes to defending their eggs. So, you might be wondering if these birds can attack you.

The answer is no, not really. Even though there are many myths about how the wings of a swan might break a human’s limb, swans are usually not aggressive near humans. However, they are really aggressive towards other waterfowls, especially during their mating season, when they try to establish their territory.

However, remember to steer clear of a swan’s nest. Swans are very protective of their young ones. They will hiss and flap their wings at you, which might not be dangerous, but provoking an angry parent swan is unnecessary and perilous.

What do swans eat?

Swans are omnivores, with their usual diet consisting of aquatic plants, fish, and the occasional insects. However, their diet may vary depending on their habitats.

The swans that live in freshwater feed on pondweed, stonewort, and wigeon grass, along with tadpoles and insects like milfoils. On the other hand, swans that inhabit saltwater like to feed on sea arrow grass, salt marsh grass, eelgrass, club rush, and green algae, with insects and mollusks.

Do you wish to feed the swans in the pond near your house but don’t know if you should go ahead? Well, as we have already discussed, swans are not harmful to humans, especially the ones who offer them food.

You can feed them potatoes, cabbage, spinach, lettuce, and grains like wheat and corn. In fact, most green vegetables are perfectly healthy, except the nightshade plants, like tomatoes, eggplants, and more.

There are a few foods that you should strictly avoid feeding to your swans. We have curated a list for your convenience. Take a look:

There are a few pointers you must remember before feeding these birds anything.

It is common knowledge that birds don’t possess teeth. But is the belief true for all birds? Well, as far as swans are considered, it is. Swans, like most of their relatives (ducks and geese), don’t have teeth.

However, in place of teeth, these birds do possess serrated edges around their beak, known as lamellae, which they use for catching slippery prey.

Despite lacking teeth, the swans are quite ferocious, particularly when it comes to protecting their younger ones. While these birds might quarrel with other waterfowl, they’re rarely aggressive towards humans and pose no threat to them unless provoked.

300+ Adorable Names For Your Pet Goose