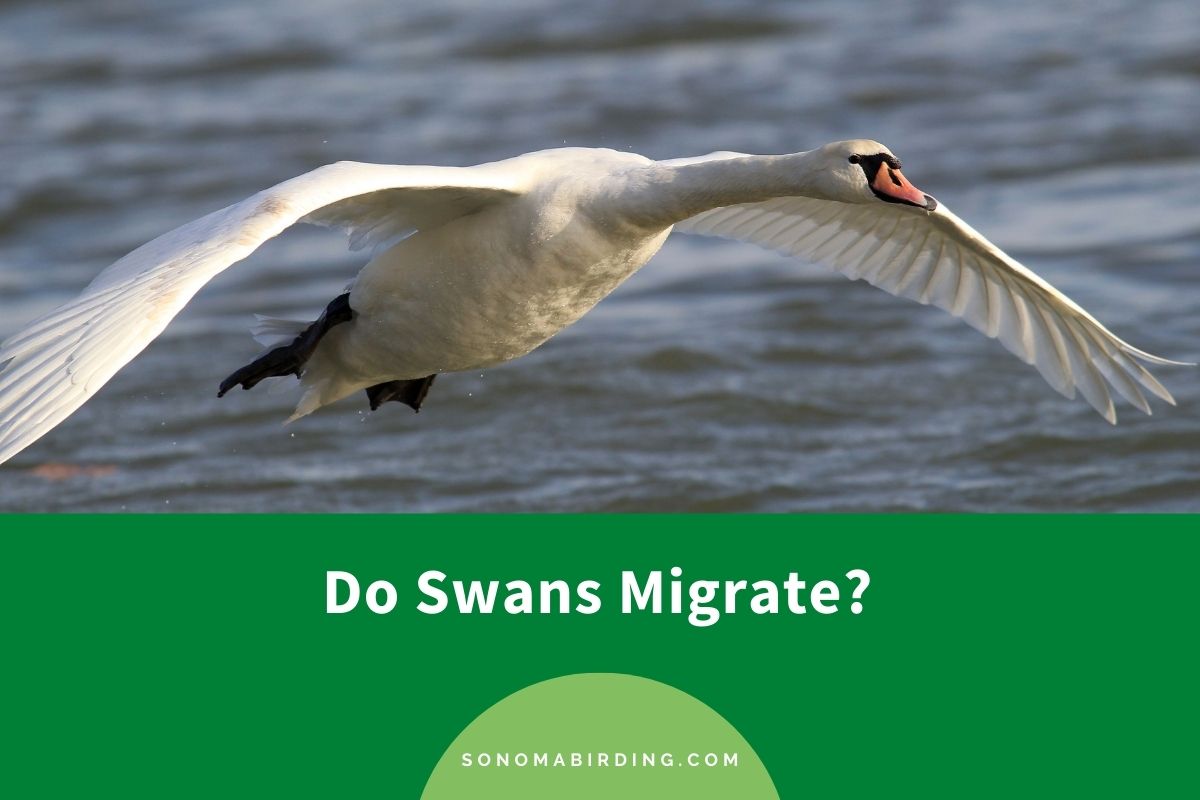 Swans are collectively agreed upon to be the royal and most graceful species of birds. While the most known fact about swans is their aww-worthy life-long partnership, not many have much knowledge about their migratory behavior.

Because the majority of the birds worldwide migrate, when one is asked if XYZ species migrates, the answer you’ll mostly get is a yes. But that’s not always the case.

What about swans? Well, for starters, migratory patterns in each swan species are different. You’ll find the answer to the ‘how’ of that today.

So, do swans migrate? Yes, swans are migratory in nature. All seven species of swans have different migratory tendencies and patterns in some way or another. With each species responding to different factors differently, all of them are either partly or wholly migratory, with the exception of Black swans, which are nomads.

The northern trumpeter migrates down South to Canada and north-western states of the US, while the Mute swans migrate partially and only far as necessary because of their territorial behavior.

The Black swans are nomadic with the most erratic migration patterns of all; the Tundra swans are the ones that migrate the most.

Compared to other migratory birds, swans primarily migrate or relocate for a rather short while to wait out the winter and head back to their breeding grounds within a couple of months.

Swans indeed are a fascinating species, and this article will get into the details of each of the seven species’ migratory patterns and behavior.

Whether you’re doing some research for your school project, or are simply curious after you saw a cute pair flying over during a visit to grandma’s last spring, you’ll leave this page knowing more about swans’ migration habits than you planned.

Let’s begin with naming all the species of swans. While there are a few races and subspecies, there are primarily 7 identified species of swans in the world today – five of them white, and two black – namely the Mute, the Whooper, the Trumpeter, the Tundra, the Coscoroba, the Black, and the Black neck.

Why do Swans migrate?

Yes, I hear you. This might seem a silly question, but you have to understand not all birds migrate for the same reasons, even though they can be largely similar in most cases. Similarly, climate change has also contributed quite a lot to migration behavior and patterns that weren’t seen before.

But apart from the possible climate change factors at play, the primary reason why swans migrate is to nest during harsh winters.
Like many others, swans prefer to have the same, familiar breeding region. Therefore, migrating for them is only a means to survive the frozen weather that limits their food supply.

Because swans are mostly herbivores and feed on aquatic vegetation, while a few also eat small aquatic creatures like frogs, worms, and small fish, winter is bad news.

So, when the cold takes over, they travel primarily to the east and especially the South for two main reasons – finding food and raising their baby swans (called cygnets).

Depending on the region they come from, different species migrate for different distances and periods. This brings us to our next question.

Do all Swans migrate?

To answer with a simple yes or no. No, not all swans migrate.

Though all swans are partial or wholly migratory, as I mentioned in the beginning, some species don’t quite fit either. Those species are the Mute and Black swans. Why? We’ll get there after we look at the patterns of swans that do migrate.

Keep on reading to find out!

What are the areas each species that do migrate usually travel to?

The trumpeter swans being native to northern America, are exposed to a much harsher winter cold compared to the Eurasian and Australian native species, forcing them to travel down south toward the central United States.

Flying in V-shaped flocks, the states that the trumpeter swans usually migrate to and from are Colorado, Montana, and Washington. They also frequent the Pacific coast and southern regions of Canada.

The Tundra swans, also native to northern America – the Artic in particular – can overlap migrating regions with Trumpeter swans like the pacific Northwest and the Chesapeake area. But the places they most commonly migrate to are southern Canada and the coasts of Alaska and the Pacific.

Tundra swans are the ones that cover the most distance, making a trip of close to 6,000 km twice every year!

Another Eurasian species, along with the Mute swan, Whooper swans, are found across the entirety of Europe, particularly Finland. A little fun fact, the whooper swan is Finland’s national bird.

They mainly breed in the taiga and tundra regions of Eurasia. So naturally, their migratory routes are more or less fixed throughout southern Europe and eastern Asia – miles away from their northern American buddies.

After the Trumpeters, Whooper swans are one of the most powerful fliers among all swans and can cover a great distance during summers and winters within a few weeks.

A species native to southern America, the black-necked swans are largely concentrated in Chile, Uruguay, and the Falkland Islands. They migrate a comparatively shorter distance of 3,000-4,000 km to southern Brazil and Paraguay during the winter.

The only species that are genetically much closer to ducks and geese than swans because of their super short necks are the Coscoroba swans.

Their breeding and resident areas almost completely overlap with the black-necked swans, as they mostly flock over central Argentina, Chile, and southern Paraguay.

They also don’t migrate that far. Their most commonly migrated places are Northern Argentina, southeastern Brazil, and Uruguay – a pattern very similar to the black-necked swan.

These were the swans that do migrate when winter hits. Now, let’s take a look at the non-migratory swans.

Species of swans that don’t migrate

Mute swans, usually considered to be partial migrators, are essentially non-migratory in nature but only cross over when they absolutely need to.

Mute swans and the trumpeter are two of the most territorial species among the 7. But in comparison, the Mutes migrate far lesser than the trumpeters because of their relatively warmer native and breeding grounds – western Europe, mainly the UK.

Black swans are unique in terms of their geographical foothold and the closet to being a non-migrant species of all seven.

Native to Australia, Black swans aren’t exactly migratory. They are nomadic, so you could say they migrate within Australia, circling the south-east and south-west and moving into more interior parts when the climatic conditions don’t suit them.

What does it mean then? Are Black swan migratory or not? I’d say it’s relative, but strictly speaking, no. That makes two non-migratory swan families.

Well then… So, to answer your question once more, swans do migrate except for two species.

Swans are social creatures but also extremely territorial and protective of their mates and young ones. Caring for their babies, bringing them up in a suitable weather/environment is also a part of the reason other than lack of food for migration.

I hope I answered all swan-migration things you were curious about. Well then! I’ll end this article with one last question. Are swans really ridiculously gorgeous? Yes, they absolutely are.

Now, go write that paper and try to catch a sight of more swans the next time you visit grandma’s house.

Do Swans Have Teeth?

300+ Beautiful Names For Your Pet Swan