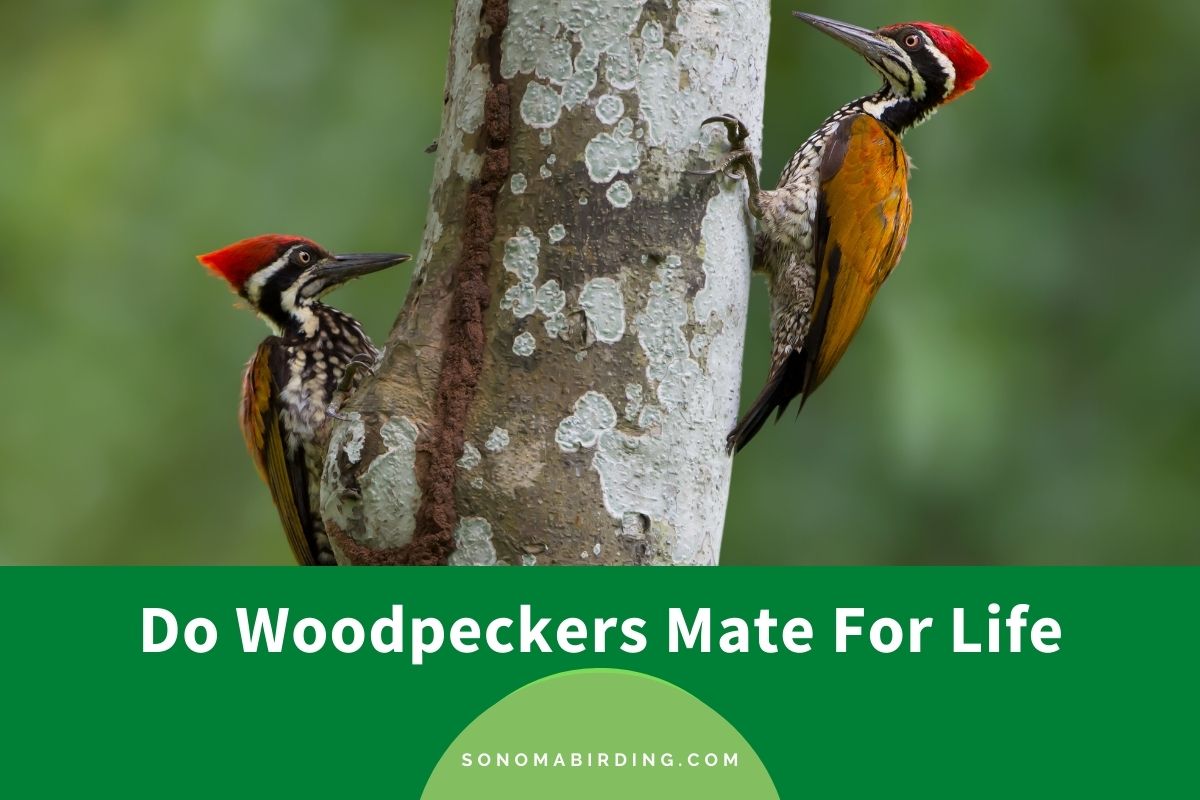 Woodpeckers are quite fascinating in the avian world because of their unique habit of pecking into the bark of trees. You must’ve heard them at least once, hammering away at old trees. But can these noisy birds be added to the list of birds that mate for life, with swans, albatrosses, Black vultures, and some others? Let’s find out.

Stay with us till the end of this article, and we’ll tell you everything you need to know about the mating habits of woodpeckers, including nesting habits, breeding habits, courtship rituals, and more.

When do woodpeckers reach sexual maturity?

Did you know that woodpeckers have a short lifespan of only 4-12 years in the wild? It is because they’re either preyed upon by larger predatory birds like falcons, eagles, and hawks or shot down by hunters. However, in captivity, these birds are known to live for more than 20-30 years with proper care and nourishment.

How do woodpeckers mate?

Woodpeckers are monogamous for one breeding season, which means that they seek a new mate every year. However, there is one exception to the above criteria, the Acorn woodpeckers. The female of this species mate with several males during their breeding season.

In this section, we’re going to discuss the mating procedure in woodpeckers.

Drumming is a ritual where the woodpeckers tap their bills repeatedly against a resonant object in order to create the loudest sound that reaches the farthest distance. The purpose behind drumming is to show their potential and competence to their prospective partners. Outside of their mating season, woodpeckers might also drum to communicate locally with a mate or lay a claim on their territory.

Although woodpeckers used to drum on old trees and hollow logs, they quickly learned that man-made objects are more resonant than trees and logs. Nowadays, they usually drum on metallic objects like garbage cans, street signs, utility poles, gutters, and the sides of houses.

As you might have imagined, different woodpecker species have varying drumming patterns. Below, Let’s take a look at how different species drum:

Hairy Woodpeckers: Hairy woodpeckers have a rock-and-roll, steady drumming pattern, with at least 25 taps per second.

Downy Woodpeckers: In comparison to the Hairy Woodpeckers and Red-breasted Sapsuckers, these birds drum more slowly. However, they have a regular pattern with a start and a pause, which is repeated several times.

Although woodpeckers are not fans of dancing, nor are their dances particularly enchanting, their confidence during these performances makes up for the lack of pomp and show.

With utmost confidence visible in their features, the male throws their head back to point their bill up to the sky, then strikes a pose. The repetition of this movement, often in sets of 2, is what their dancing looks like.

Calling and singing while dancing to attract a potential mate is not unusual among the birds. However, the woodpeckers are not known for their tuneful songs. Although they are not melodious, their calls do the needful to attract a mate for the breeding season.

Once the males have successfully attracted a female partner for themselves, the couples are ready to mate. The mating process in birds differs from that of humans because their sexual organs are not as developed as ours.

In fact, to reproduce, woodpeckers simply rub their cloacae together. While they are doing so, the sperm from the male’s body gets ejected into the female’s body, where it travels to the reproductive tract and fertilizes the ovum. This whole process is about 15-20 seconds long and is referred to as the “Cloacal Kiss”.

What comes after mating?

After the mating is complete, the woodpecker couple starts the construction of a nest or a tree cavity to accommodate their eggs and later fledglings. It takes them about 28 days on average to finish building their nest.

Woodpeckers can be quite picky when it comes to settling on a tree to build their nest. They usually prefer dead or old coniferous or deciduous trees, although it doesn’t matter to them if it’s located in a forest or an urban area. Behind their preference for old or dead trees is the fact that these trees have a slightly softer inner cavity, in which they can build their nests without much difficulty.

Old or dead trees are an important source of nests and shelters for many other birds as well. The woodpeckers often have to battle for ownership of the tree with European Starlings, Wood Ducks, Eastern Bluebirds, and Great Crested Flycatchers. They are often known to share roosting cavities with owls and swifts.

Although the male starts building the cavity and does most of the work, the female helps towards the end of the construction by chipping away at the inner cavity of the trees. Then, most woodpeckers line the cavity with whatever soft material they can find, which are mostly vines and weeds.

However, the Pileated Woodpeckers do not line their cavities with anything but leftover wood chips. The depth of the cavity may vary in different species, but on average, they range from 10-24 inches.

The shapes of the cavity holes also vary in different species:

The size of a clutch in woodpeckers ranges from 4-6 eggs. Their incubation period usually lasts for about 10-14 days. During this time period, both the parents take turns incubating the eggs, usually rotating every 30-50 minutes.

Once their eggs have hatched, the nestlings stay in the nests with their fiercely protectively parents for about 28-35 days. Afterward, when they’re fully grown, the parents drive them away to live on their own.

Do woodpeckers return to their nests?

Most birds have the tendency to return to their old nest in the next breeding season. But are woodpeckers one of them? No, they’re not. These birds do not stay with the same partner for more than one season, which is why it doesn’t make much sense to return to the same nest.

Even after they’ve found a new mate, the woodpeckers are never seen returning to their old nests. Instead, they prefer to build a new one for themselves every season. The old nests of these birds are either used by other garden birds or become home to insects and their larvae.

Fun fact: The Red-Bellied Woodpeckers usually return to the location of their old nest and build a new cavity below the previous one.

Conclusion: Do woodpeckers mate for life?

Returning to our initial question: do woodpeckers mate for life? No, they don’t. Although most woodpecker species (except for Acorn Woodpeckers) stay monogamous for an entire breeding season, they seek a new mate in the next season. But while a couple is together, both parents share their responsibilities of bringing up their nestlings until they’re independent.