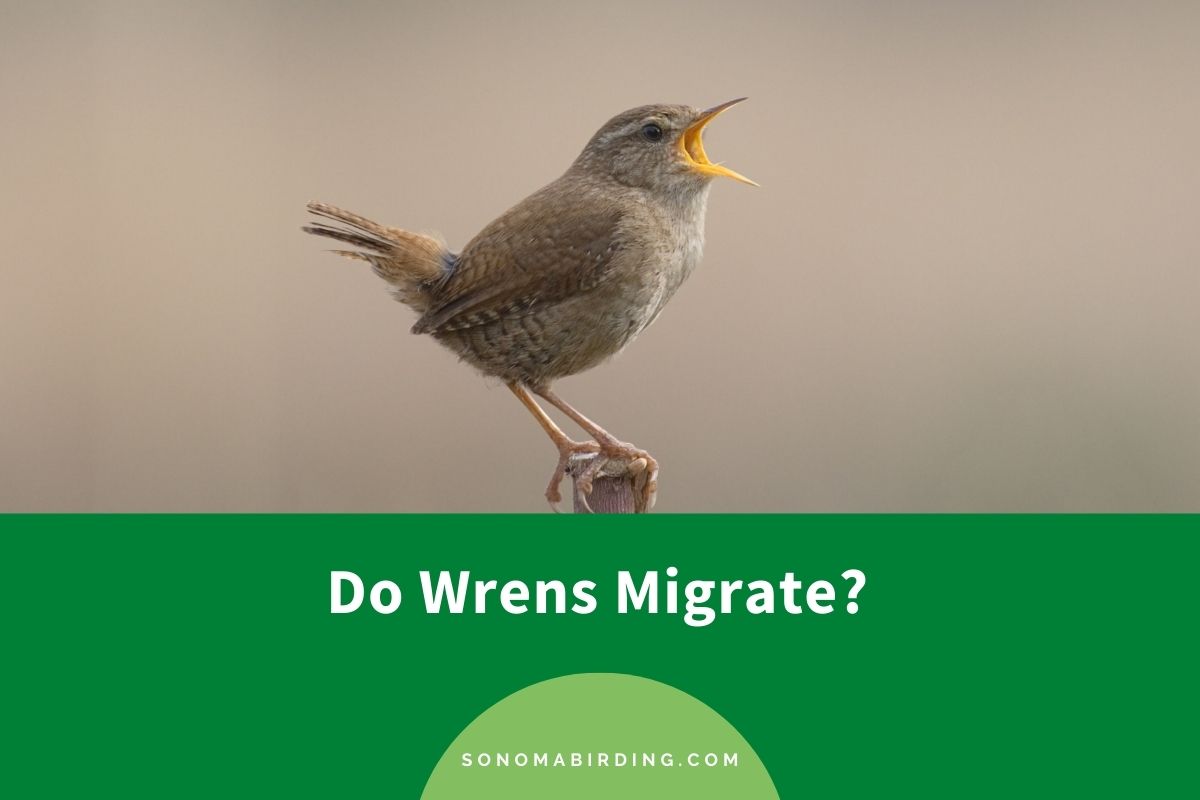 Wrens are common backyard birds that have been named after their tendency of nesting near our homes or in birdhouses.

Although wrens do not have a colorful plumage, they’re quite bright and lively. These birds bring a lively spark to the gardens and city parks by bouncing around with their tail raised, pausing now and then to sing a rich melody.

In addition to North America, wren species are also found throughout central Canada and southern South America. But are these migratory, or do they stay put in the same region all year long?

Do wrens migrate? Yes, they do. In the winter, wrens migrate towards the south from the colder northern or extreme southern regions to the warmer climates of the Southern United States and Mexico. Year after year, the male wrens return to the same nesting grounds, most often in the spring season.

The migratory behavior of the female wrens is less prominent, although they, like their male counterparts, migrate to warmer climates in the winter as well.

If you have any questions or doubts regarding the migration patterns of wrens, you have come to the right place. By the end of this article, you will know everything there is to know about the migration in wrens and more.

The family of the New World Wrens is endemic to the Americas almost entirely. Therefore, it shouldn’t surprise you that North America homes over 50 different wren species.

The following is the list of 10 North American wren species most commonly found in the United States. Take a look:

How do different wren species migrate?

Now that we’ve learned about all the common wren species of the United States let’s get to the interesting part. How do these species migrate?

How do Rock Wrens migrate?

Rock Wrens are the palest of all wren species inhabiting the United States. These birds prefer to reside in stony arid valleys and seemingly barren piles of boulders.

Birders who visit such locations might see them jumping up and down on their tiny legs as if on springs while emitting a metallic call that reverberates amid the rocks.

Strongly migratory, these birds leave the northern part of the United States during the winters. Strays are known to go east in the fall, as far as the Atlantic Coast.

Most birders are unaware of the travel patterns of rock wrens. These birds are found as far east as the western Great Plains on tough desert outcroppings, mountain talus slopes, and ravines.

How do Canyon Wrens migrate?

Unlike the Rock Wrens, which are year-round residents in their range, the Canyon Wrens often migrate to denser environments in the winter.

This wren species is a year-round resident of Washington. However, they have a tendency to migrate away from cliffs into deep vegetation, particularly near streams, and to lower elevations during the winter.

The Canyon Wrens are vulnerable to cold temperatures, and their populations might witness a severe drop in the years of harsh winter.

How do Bewick’s Wrens migrate?

Bewick’s Wren is a common wren species found in the dry thickets and open woods of the west. These wrens crawl around in the undergrowth, exploring tangles and bark cracks, flapping their long tails around and scolding at the slightest provocation.

This species is far less common in the east and has entirely disappeared from its previous habitat east of the Mississippi River.

A small part of their population is present in their breeding range throughout the year. However, many individuals migrate from northern locations and higher elevations to the south in the winter.

How do Pacific Wrens migrate?

Pacific Wrens are small, brown wren species with a beautiful and loud singing voice. These tinkling, bubbling songsters are more typically heard than seen. It is because they inhabit the dark understory of old-growth evergreen woods.

When the Pacific Wrens sing, they stand on their tail and shake their entire body. They are short-distance migrants and residents on the West Coast, from Alaska to central California.

These birds can also be found in some western states’ interiors. During winter, the Pacific wrens that breed in Canada move short distance south.

How do Marsh Wrens migrate?

The presence of the Marsh Wrens is marked by their sputtering, bubbly songs. As these birds sneak through the reeds or bounce to the top of a stem for a look around, only a careful observer can spot them.

Male Marsh Wrens build dozens or even hundreds of “dummy nests” in their nesting territory. Most of them are not even used for raising their younger ones; the adults often sleep in these during the non-breeding seasons.

The Marsh Wrens almost always migrate at night. Migrants will occasionally pause in unusual settings far away from water.

They travel to distinguished wintering sites in the east and west. These eastern population travels to the Atlantic and Gulf Coasts, while the western birds migrate to Mexico and Texas.

How do Carolina Wrens migrate?

Carolina Wrens are a vividly-colored wren species that have a rich musical voice. These birds are known to inhabit open forests and backyards across the southeastern region.

Carolina Wrens are mostly found in pairs, and each pair spends the entire year in its own area. The adults living in pairs might “duet” at any time, with the female singing while the male chattering.

Since these birds can’t withstand frigid winters, they prefer to dwell in warmer climates. During the fall, they’re likely to travel south of their breeding range.

Carolina Wrens can be found as far north as the Great Lakes, and warm winters encourage them to move further north. They are often spotted exploring brush piles and low tangles in the winters.

Fun fact: The Carolina Wrens are declared as the official state bird of South Carolina, hence the name.

The nesting behavior of Wrens

So far, we have learned about the migratory patterns of the wrens. But have you wondered how these birds spend their time before migration? Here’s a quick peek into their nesting behavior.

The average height of a wren’s nest can be anywhere between 4 and 30 feet above ground level. Wrens prefer to use either the mounted or hanging form of birdhouses for nesting purposes.

After choosing and rebuilding a nest, the female lays one egg per day until a clutch of 5 or 6 eggs is laid. These eggs are white and have dark brown stains on them.

It takes 12-15 days for the eggs to hatch. During this phase, the female stays close to them, keeping them warm and protect. However, you will find them occasionally leaving the eggs to feed.

The males are also seen bringing food to their female partners during this time. However, the truth is, they’re doing it as a practice to feed their fledglings when they’re born.

Following the hatching of the eggs, both adults feed their younger ones in the nest. The mother usually sleeps with the chicks, and the male picks another hollow close by to nest in.

After 16-17 days of caring for the fledglings, the adults leave the nest and meet up with other adults but continue to feed and train their babies for another two weeks.

Wrens are also known for being violent, piercing the eggs of other cavity-nesting birds despite their small size. It is something you must consider before you place a birdhouse for these birdies in your yard.

How can you help?

Now that you’ve read all about these little songbirds, you might want to help them through their difficult annual journey.

Did you know that almost 2.6 million birds die during the winters each year? Don’t worry; in this section, we’ve listed just a couple of thoughtful steps you can take for them without much effort.

The most important help you can offer to any bird is water since the lack of water kills most birds during their migration in the first place. Putting out heated birdbaths can save a lot of bird lives.

Food is another important factor to remember if you wish to help migrating birds. Birdfeeders and berry bushes are the best ways to help these birds out.

Always keep in mind that these birds will also bring their sweet melodious voices into your yard.

Apply tempera paint on your windows

As you must’ve learned by now, many birds tend to fly during the nights. These birds are more vulnerable than the others since they are more likely to collide into house windows.

Many birds die every year due to bird-window collisions because they see the reflection of the sky, clouds, and trees in the windows.

To help them out, you can apply tempera paint on your windows, which is easily available, inexpensive, and long-lasting.

All you need to do is paint a grid pattern no bigger than 4 inches by 2 inches. However, you can also get creative and make your own creative patterns.

In this article, we have talked about the six most commonly found species of Wren in the United States of America.
We discussed their common habits, migratory patterns, and their nesting behavior.

We have also put in a list of low-effort activities that can help the survival of these birds during their migration.