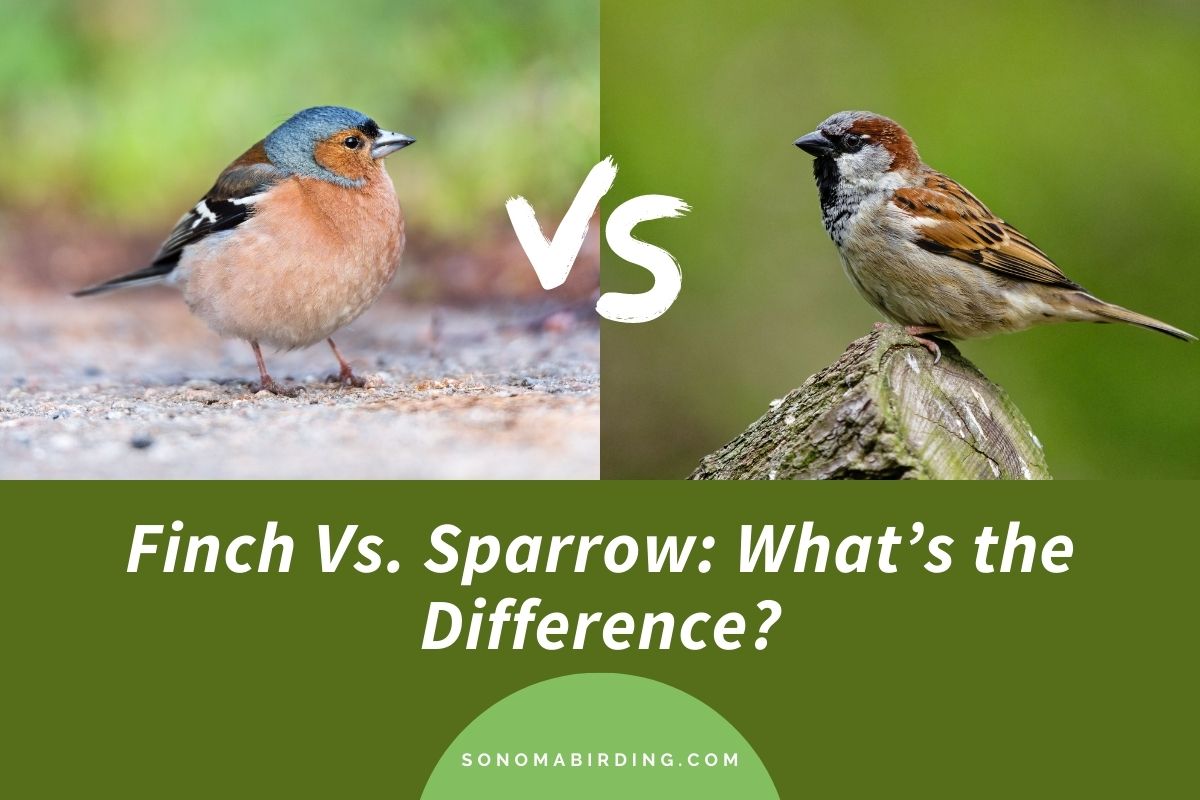 But in order to tell a finch apart from a sparrow, you’ll need to observe them closely. In fact, because of the diversity of their families, you might not be able to distinguish between them even from up close. Are you wondering about how to differentiate them from one another?

Sparrows are generally larger than finches in size and are also more heavily built. They have a well-rounded body with a rounded head and tail, which is different from the finches’ flat head and notched tail. The beaks of these birds are also significantly different. While finches possess a sharp-edged bill, the bill of sparrows is stout, more conical, with an extra bone in their tongue and help them eat seeds.

In addition to the differences in the appearance of these birds, there are several other grounds on which you can tell them apart. Keep reading to learn more about their differences and similarities.

Finch Vs. Sparrow: At a glance

There are various grounds on which finches and sparrows can be differentiated. But before we dump all that information on you, here’s a table listing all their quick differences for your convenience. Take a look:

Now, we’re ready to talk about all their differences in detail. Let’s start by talking about how their families are (or aren’t) linked and then proceed further.

Are finches and sparrows closely related?

As you can clearly see in the table from the last section, the families of both finches and sparrows are quite large and diverse. In fact, the way some birds of these families have been named just adds to the confusion.

For instance, there’s a genus of sparrows in the Estrildid finch family that consists of two species, Java and Timor Sparrows. On the other hand, you can find several rockfinch and snow finch species in the old world sparrow family. Additionally, few other finches and brush finch species can also be found in the New World Sparrow family.

So, does it mean that finches and sparrows are closely related? No, not really. While the appearance and diet of these birds might have similarities, their families are not closely related.

True finches, estrildid finches, old world sparrows, and new world sparrows are all separate families. Now, let’s take a look at some of the popular finch and sparrow species you can find in the United States.

It is important to note that estrildid finches are not endemic to the US or North America. Any species that can be found here are either introduced or invasive.

As most of you already know, the old world sparrows are endemic to Africa, Europe, and Asia. In North America, you can only find two introduced species of this family:

In the last section, we learned how true finches are not to be confused with Rockfinches, Snow finches, and Brush finches, all of which belong to either the new or old world sparrow families.

These finches are not related to the sparrows in any way and are quite different in appearance as well. Do you want to learn more about how to distinguish between finches and sparrows in terms of their physical features? Let’s find out!

Finches are tiny passerine birds with a remarkable, stubby beak, wings that seem quite short for their bodies, and a short, notched tail. While the size and color of their beaks might vary according to the species, most true finches possess beaks that appear relatively large for their tiny faces.

In terms of plumage coloration, the finch species are quite diverse. The base color of their plumage is generally either brown or green, with a significant amount of black in it. In most species, you will find plumage markings in yellow, red, and blue. These birds rarely display white, except for their wing bars.

Among the adult finches, most true finch species display sexual dimorphism in plumage. So, while the males and females of a finch species might be sized nearly the same, the females will appear duller than the males due to the absence of the dark marking you can see on the males’ plumages.

All sparrow species have a small but stocky body, with short legs supporting their plump frame. They have a short face with a large, conical bill that’s strong enough to break the hardest nuts in the world.

The major plumage colors for the sparrows include brown and grey, with subtle differences noticed in different species. In comparison to the old world sparrows, the new world sparrows show more diversity in their plumage.

Sparrows are quite large-winged in comparison to most seed-eating birds, with a short, rounded tail.

The adult sparrows are strongly sexually dimorphic. The males are considerably larger and heavier than their female counterparts and also sport bolder markings on their heads.

Now that we’ve learned about the physical descriptions of both finches and sparrows, let’s do a quick review of how to differentiate between them on the following grounds:

As we’ve already discussed above, both finches and sparrows are medium-sized birds with significant variation among their species. However, when you compare them in terms of their size, you’ll generally find the sparrows to be larger and heavier than the finches.

Because both sparrows and finches follow a closely similar diet, they possess strong, conical beaks. However, while finches have a sharper bill, the beak of sparrows is larger and more powerful.

Furthermore, sparrows also happen to have an extra bone in their tongue, which cannot be seen in any other seed-eating bird. This extra bone is called the “preglossale” and helps them in stiffening their tongues while holding seeds. As you can gather, finches have no such bone to support their tongues.

Both finches and sparrows are short-tailed birds. However, the tails of the finches end in a notch, while sparrows have rounded tails.

In addition to it, finches have wings that seem short for their bodies, whereas sparrows’ wings are broader and appear large in relation to their bodies.

Because finches are smaller than sparrows, it is obvious that their heads would be smaller than the latter. But another important difference between the heads of these birds is that while sparrows possess a well-rounded head, the finches are rather flat-headed.

When it comes to their plumage colorations, it’s a well-known fact that the family of finches is far more colorful than the sparrow family. Be it the true or estrildid finch family, you will notice many colors and marking variations in these birds.

On the other hand, when you take a look at the sparrow family, you will observe that their species show subtle color variations and are mainly either grey or yellow in color.

It is no secret to us that both finches and sparrows are loud and noisy birds. But can you differentiate between their calls and use them as an identifying feature? To help you achieve that, let’s take a look at what the calls of the following finches and sparrows sound like:

Vocalizations of the popular Finch species found in the United States:

Vocalizations of the popular Sparrow species found in the United States:

If you’re looking to distinguish between the finches and sparrows, their choices and preferences of habitats can help you a great deal with it.

As adaptable birds, both finches and sparrows have adapted to nearly every environment and are, therefore, found in almost every part of the world.

However, the finches have a preference for thick forests and other areas surrounded by plenty of trees. Some finch species are also known to occur strictly in arid and semi-arid areas.

On the other hand, the sparrows exist alongside humans and will generally dwell in open areas. You might never find these birds in the woods.

In terms of their diet, the finches and sparrows are not all that different from each other. Both of these birds feed on seeds and nuts primarily and can occasionally eat a variety of fruits as well.

However, one major difference between these birds is that in their breeding months, sparrows actively hunt on insects to feed their younger ones. And the birds of the finch family are generally not inclined towards consuming insects.

The only exceptions to this rule are larger finches such as Owl and Waxbill Finches. But these finches have an insectivorous diet and will feed on insects all year round.

With this, we have come to the end of our article. Today, we’ve learned that while finches and sparrows might look similar from a fair distance and eat the same food, they’re very different from each other.

The first and most obvious difference between finches and sparrows lies in their appearance. When you examine them closely, you’ll find that sparrows are not only the larger ones but also heavier than finches. In terms of coloration, they’re poles apart. While finches are colorful birds, all sparrows are primarily either brown or grey.

Another major difference between these birds is their choice of habitat. The finches are more inclined to inhabit thick forests and woodlands, with some species primarily found in the desert regions. On the other hand, sparrows are more of open landscape birds and rarely venture into the forests.

Grackle vs Crow: How To Tell the Difference?

Seagulls vs. Albatrosses: What&#8217;s The Difference?