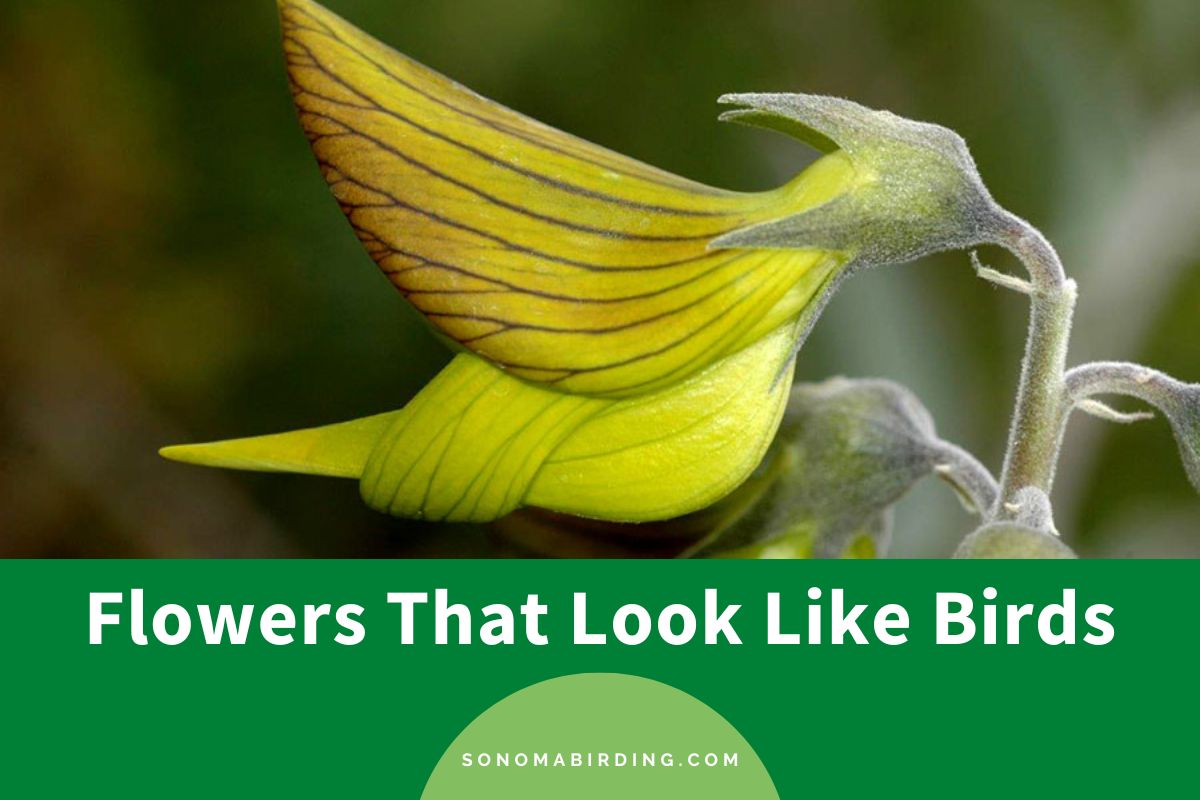 Have you ever seen a flower and thought it looked like a bird? There are actually quite a few flowers that look like birds, and today we’re going to take a look at nine of them. The next time you’re out in nature, keep your eyes peeled for these unique blooms! 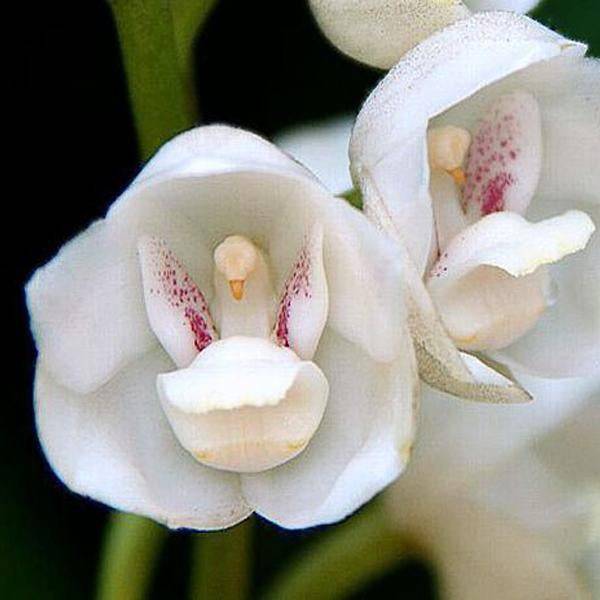 Also referred to as Holy Ghost Orchids and Flower of the Holy Spirit, the Dove Orchids are flowering plants belonging to the Orchid family. These plants are commonly found in Central and South America.

Dove Orchids grow on light-green, upright stems in small clusters (often of a dozen flowers). They’re marble-white in color, made up of several tear-shaped petals that form the outer bulb. The anthers and pistils inside are yellow in color, and within the bulb resides a small white bloom shaped like a dove.

If you take a closer look at it, you’ll see the front profile of a dove facing downwards, its well-defined beak clearly visible.

Dove Orchids have a waxy texture and are quite sturdy. They bloom between late summer and early fall and require plenty of sunlight and warm temperatures to thrive. These plants tend to grow at the ground level and are naturally found in mature forests. 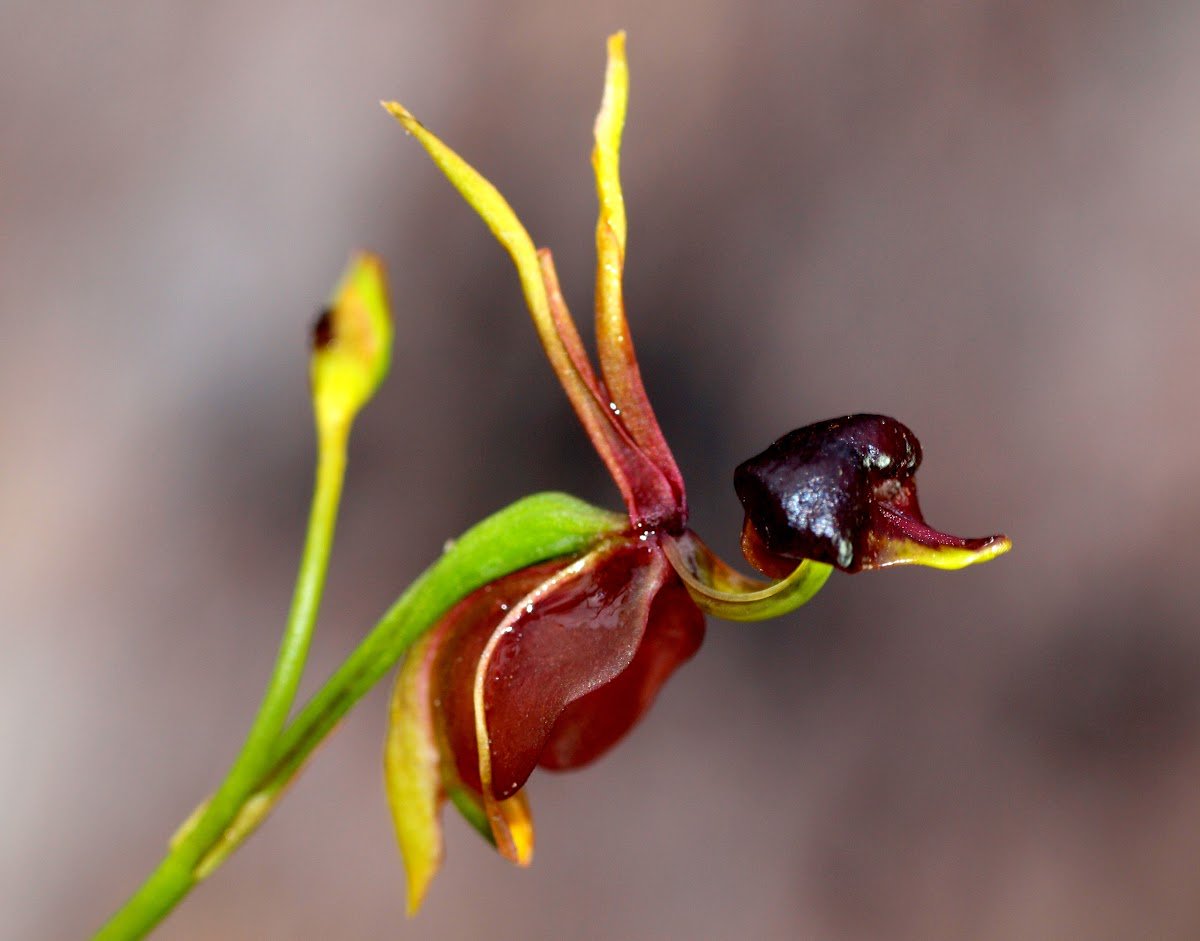 The Flying Duck Orchids are small plants from the Orchid family that grow in the Eastern and Southern parts of Australia. As you can gather from the plant’s name itself, they have flowers that appear just like a flying duck.

The flowers of these plants are incredibly small, growing as large as 2 centimeters in full bloom. They’re shaped uniquely and can be divided into two parts: the smaller part that looks like the duck’s head and the larger one that resembles its body.

The larger part is attached closely to the green sepal and is purplish with a touch of red, while the head is deep purple, with a bill-like structure protruding in front. You’ll also notice two thin and tall wing-like petals standing erect, attached to the larger part of the flower, giving us an impression that the duck is in flight.

Flying Duck Orchids bloom between late spring and early Summer but cannot be grown in any other part of the world. Wondering why? Well, it is because their natural habitat – the eucalyptus woodlands of Australia – is also home to a unique fungus. And since the roots of Flying Duck Orchids maintain a symbiotic relationship with this fungus, their growth in its absence is impossible.

Fun Fact: The Flying Duck Orchid flowers also attract the male sawflies, who are tricked into seeing them as female sawflies and hovering around them. The sawflies end up acting as their pollinators and are an important contributor to the survival of these vulnerable plants. 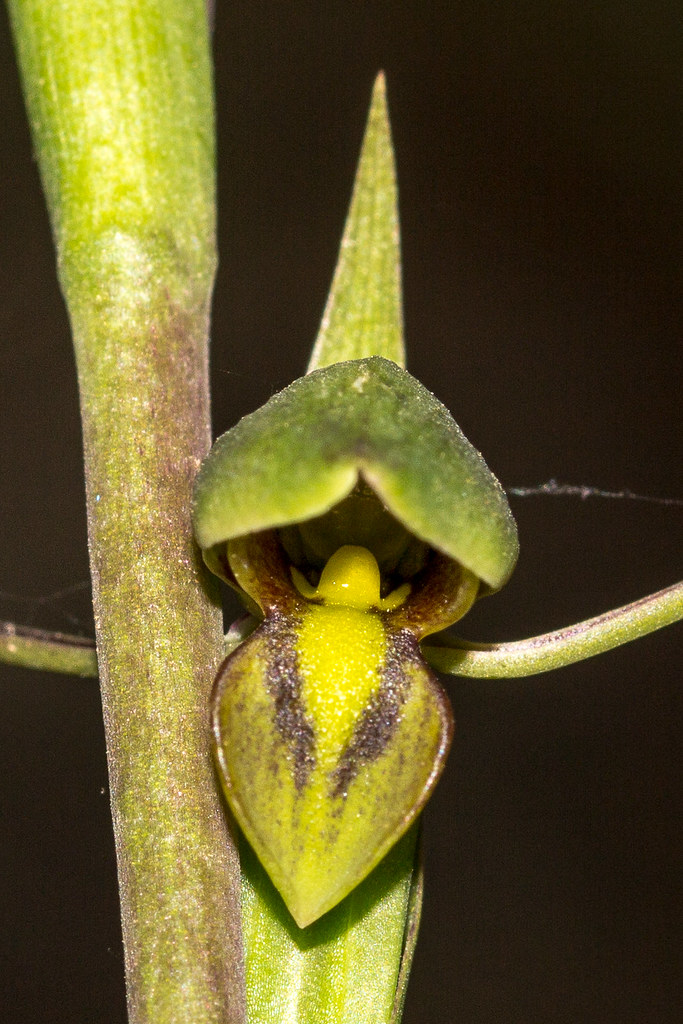 Also referred to as Horned Orchids, the Bird’s Mouth Orchids are another tiny member of the orchid family endemic to New Zealand, New Calendonia, and Southern and Eastern parts of Australia. These plants are quite adaptable and can be found in scrubs, heaths, shrublands, and grassy forests and bloom between the months of November and February.

While the flowers grow in tall, light green stems in clusters of nine, their own color shows some variation and can be Brown, Maroon, or Yellowish-green in color. They’re incredibly small (not crossing even 1 centimeter in size) and have several oblong petals that come together to form an egg-like structure, save for one.

This last petal, which faces the opposite side, ends up giving the flower an opening that looks very much like a baby bird opening its mouth, hence, the name. 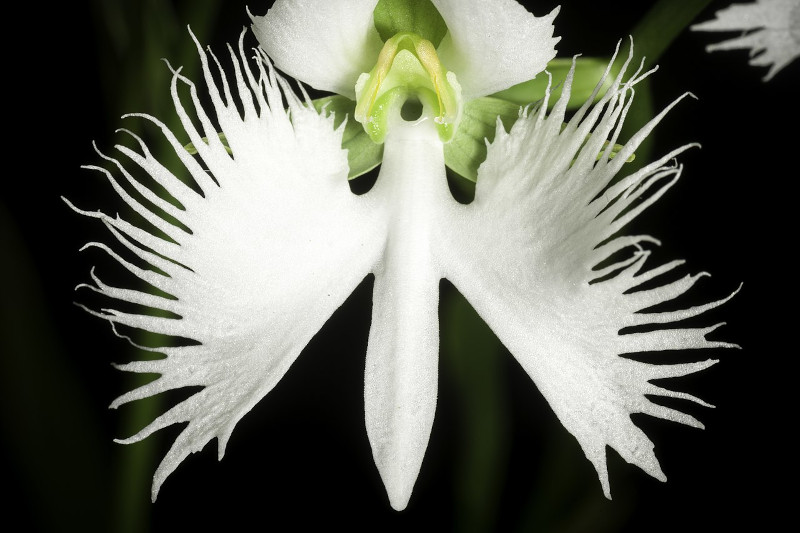 Also referred to as Fringed Orchids, the White Egret Orchids are members of the orchid family found in Russia, Japan, Korea, and China. These plants are known to bloom in late summer, with their bloom lasting for about 4 weeks. You can spot them in the upland bogs, grassy wetlands, and seepage slopes within their range.

The White Egret Orchid plants are quite tall in their adulthood, standing as tall as 18 inches. The flowers of these plants, which are their central attraction, grow on unbranched stalks; on each stalk, you can find 6-8 flowers.

The flowers initially have a long, almost oval, white petal that later grows on each side, resembling the Snowy Egrets in flight, which is how they’ve been named. Their plants need a humid environment to grow, but the soil should be dry, particularly in the growth phase. 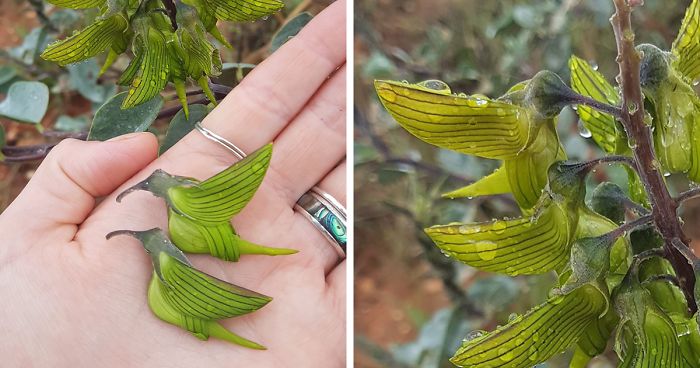 Also referred to as Parrot Pea and Regal Birdflower, the Green Birdflowers are small shrubs belonging to the legume family. They’re endemic to the northern parts of Australia and bloom well in temperate and semi-arid regions where the soil is well-drained. This is why you’ll often find them growing in the sand dunes, coastlands, and deserts within their range.

Green Birdflower plants have thick, woolly branches that can grow as tall as 3 meters in height. The leaves are dull green, and the flowers that grow at the end of the long spikes of the branches are light green with faint black lines running across them. These flowers are shaped very much like birds that are attached to the tree by their bills, lending the plants their name.

Various large bees and honeyeaters pollinate the Green Birdflowers, and they bloom between January and April. 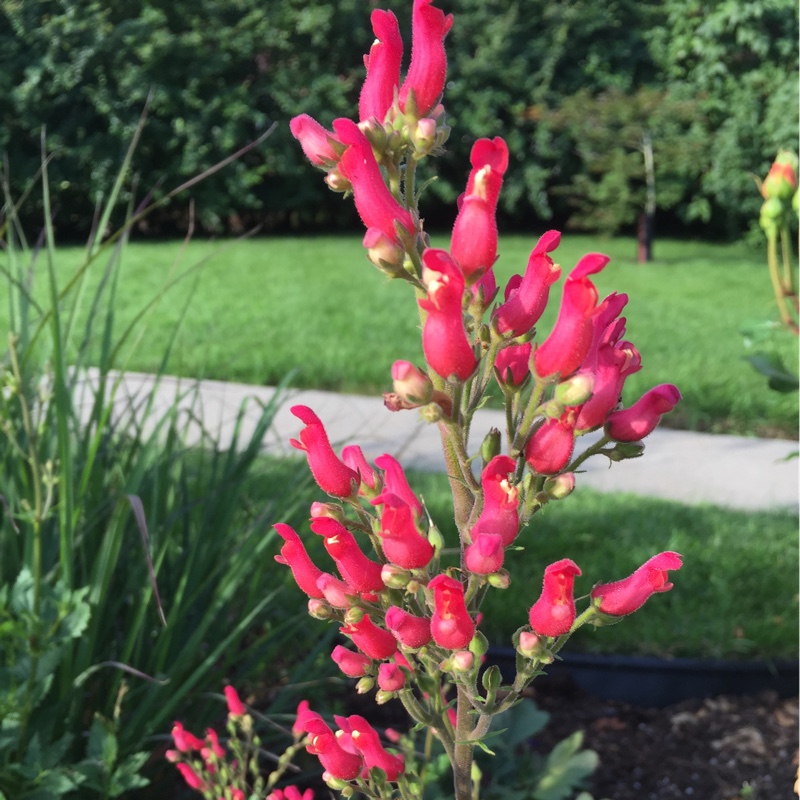 Closely related to the figwort plants, Red Birds in a Tree Plants are wildflower plants that are endemic to the mountains of Arizona and New Mexico. As you might have guessed already, these plants have been named after the bird-like shape of the bright red flowers that grow on them abundantly. From a fair distance, you’ll notice the flowers appear like little red birds perched on the tree.

Red Birds In A Tree plants are naturally found in high-elevation coniferous forests and woodlands, with activities like mining and construction posing a threat to their dwindling population.

Because they can grow in almost any soil type (except for clay) and are quick to grow, growing them in your yard can be a great idea. This is especially true if you’re a birder because these trees are a magnet for hummingbirds. 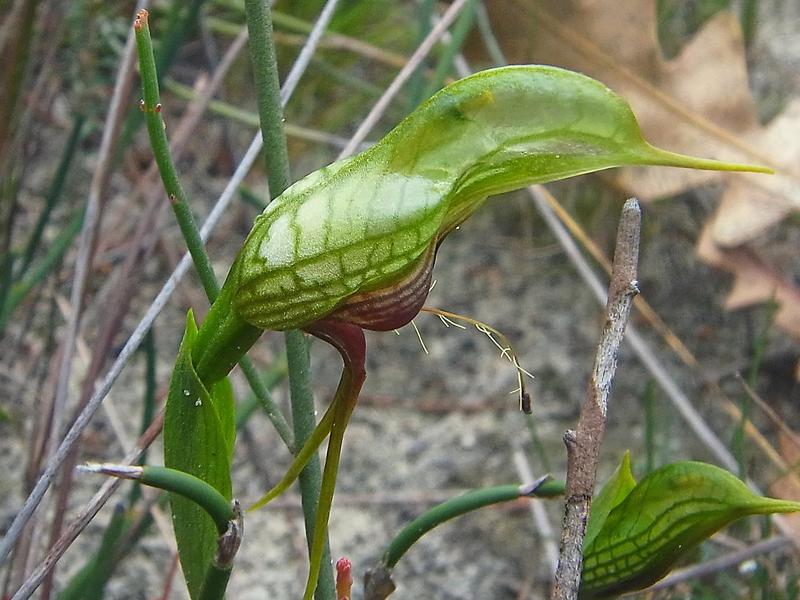 Although the Western Bearded Greenhood plants are members of the orchid family, it’s impossible to tell by their flowers. These herbs are endemic to western parts of Australia, where you can find them growing in clumps in shrubby woodlands, leaf litter, and forests.

The flowering months of Western Bearded Greenhood plants lie between July and September. Around this time, a rosette of about 15-20 stem leaves appears on the plants. Soon, a pale, translucent flower grows on each stem.

These flowers are shaped roughly like a tiny bird, with dark green veins running along the length and brownish/purplish markings around the front. Their sepals are joined at the base to resemble a long tail. 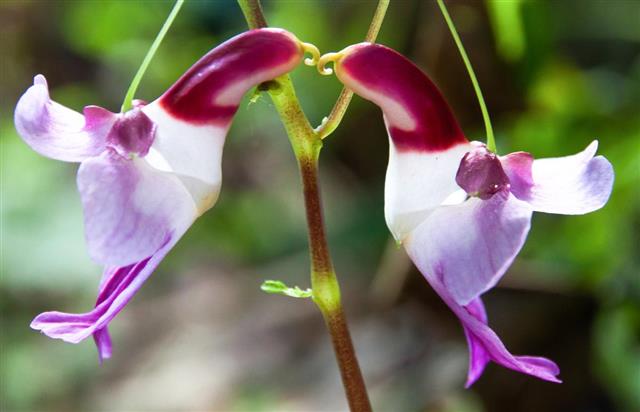 Also referred to as Parrot Balsam, the Parrot Flowers are balsam plants endemic to South Asia. These plants are an extremely rare species; so rare that we have no knowledge of their pollinators as of now.

While they’re found in several South Asian countries, their predominance lies in the tropical forests of Thailand, where they’re considered a protected species, banning their export. These plants require a hot and wet climate to grow into a large, wide-leafed bush.

The flowering season of Parrot Flowers is very brief, with flowers appearing only for 2-4 weeks between October and November. They’re a mix of Purple and Carmine Red in color, with a bulbous lower sepal that appears as the bird’s head. Long, united petals make their wings, and narrow, hooked spurs make their legs. 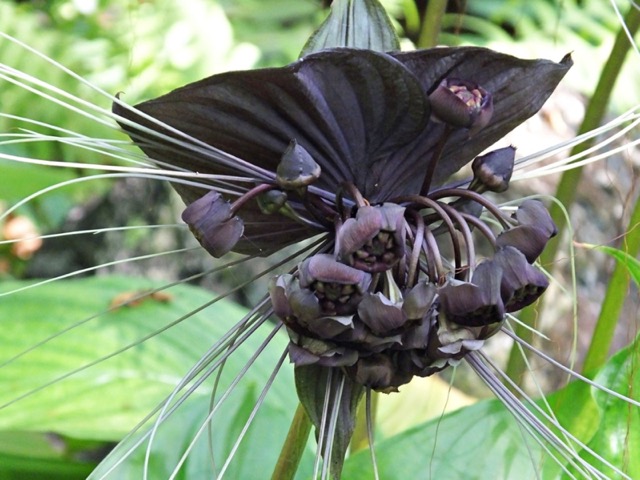 Also referred to as Cat’s Whiskers, the Bat Flowers are members of the same family as the Arrowroots and are quite popular for their unusual flowers. They’re found in the tropical forests of South Asia, with the blooming period lying between late spring and early fall.

As their name indicates, the flowers of these plants appear like real bats. They’re quite large in size, growing as much as 12 inches, have black bracts that are shaped roughly like bat’s wings, and dark seed pods make for their faces.

These flowers also have several long bracteoles emerging from the center and falling out on all sides. They’re about 36 inches tall, giving the flowers a whiskered appearance.

With that, we’ve reached the end of our article. Today, we learned about nine unique flowers that come surprisingly close to resembling birds. Wasn’t that impressive?

If you’ve been paying attention, you’d have noticed how a majority of plants in our list belong to the orchid family. We also learned how some bird-like flowers also work well in attracting real birds, like the hummers to the Red Birds in a Tree. In the end, it’s hard to say which flower is actually the most beautiful — they are each special in their own way.

Have a great day!