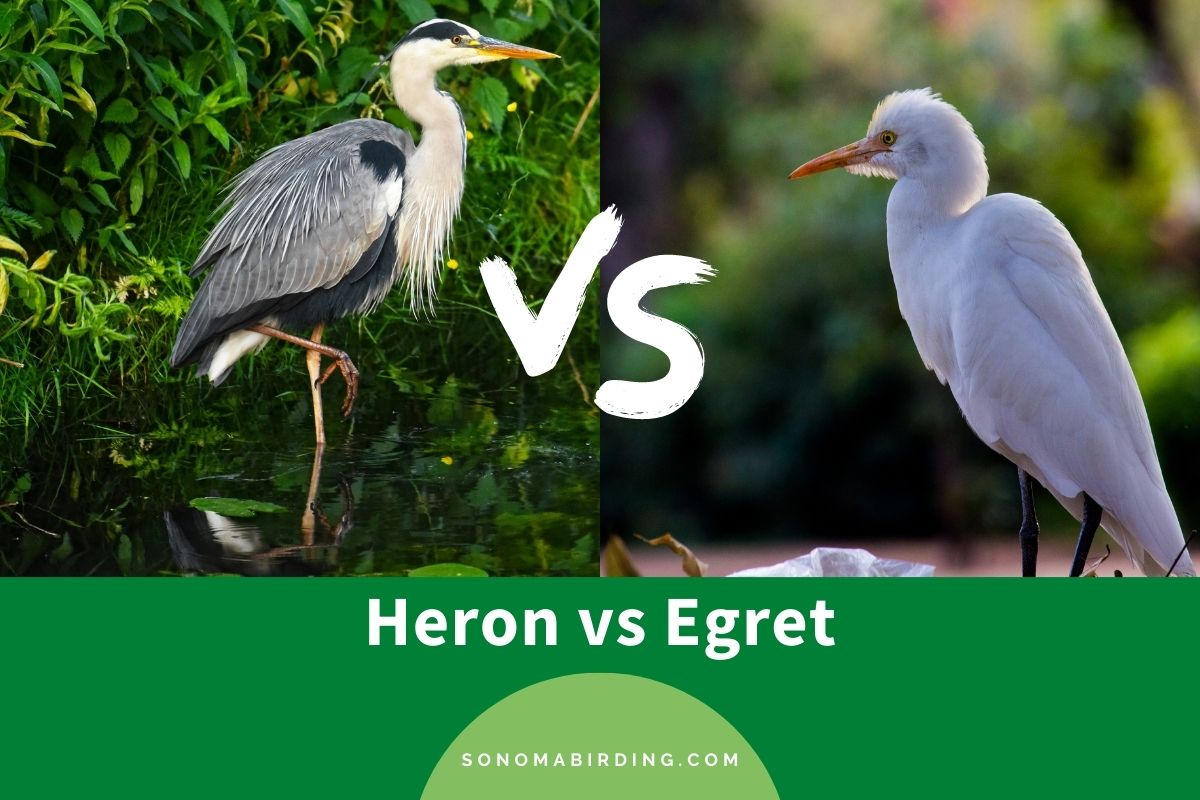 Did you spot a whitish waterbird wading through the sky and are wondering if it was a heron or an egret?
You’re not alone. The confusion between these birds is quite common, considering these two belong to the same family.

The easiest way to distinguish between herons and egrets is by their coloration. While the herons can have varied colors in their plumage, the egrets stick to a white or buff plumage. Also, while egrets lack any plumage decoration that you can see in herons, they display beautiful breeding plume feathers unique to their species.

Since herons and egrets do not have a biological distinction between them, the line between these species can easily be blurred.

In this article, we’ve gathered all the information about these birds that can help you in telling them apart. Stay with us till the end to know more.

Heron vs. Egret: at a glance

Before we talk about herons and egrets, let’s first discuss what waterbirds are. Any bird that inhabits an area in or around the water bodies (both freshwater and saltwater) are known as a “waterbird.”

It might come as a surprise to some, but the herons and egrets are not the only ones that have a similar appearance (body structure). The cranes, storks, ibises, and spoonbills all have some resemblance to the herons as well.

However, these birds belong to different families and genera and have some or the other distinction that can easily set them apart.

Fun fact: There are two members of the Ardeidae family that are known as both herons and egrets:

The Ardeidae family is a family of waterbirds that consists of herons, bitterns, and egrets.

According to the International Ornithological Congress (IOC), 74 recognized species in the family are divided into 18 different genera.

Unfortunately, five birds of this family (all heron species) have already been extinct, which leaves us with 43 heron species, 15 bittern species, and 9 egret species.

Now, we’ll look at all the heron, bittern, and egret species found in North America.

How were Herons and Egrets named?

Let’s begin with the taxonomy of herons and egrets.

The term “heron” comes from the Old French term “hairon” or “eron.” However, the taxonomy of the egrets is far more interesting than this.

First, you must know that all egrets were initially herons. They were put into a separate group much later.

The term “egret” comes from the French term “aigrette.” Now, this term has two different meanings.

One meaning refers to a “silver heron,” which would be suitable for the egrets since all egrets have white plumage.

Another meaning of “aigrette” is the plume feathers of these birds unique to their species and cannot be found in bitterns or herons.

In fact, for years, the breeding plumage of the egrets was a part of the fashion industry, being used in making exotic headdresses.

However, since the egrets had to be killed to obtain their plume feathers, the practice had to be banned to save their species from extinction.

Because the egrets have been separated from the rest of the herons based on their appearances, it makes sense to discuss it first. Let’s learn more about what these birds look like.

Both herons and egrets are medium-to-large in size and have long legs, which allows them to forage in the shallow waters of their habitats.

The bills of these birds are shaped somewhat like a harpoon, which makes it easier for them to catch fish. The thickness of the bill can vary from species to species.

Although both these birds are quite tall, their height appears to be diminished due to their curvy necks.

Because of the modified shape of their cervical vertebrae, they have an S-shaped neck that they can retract and extend on will.

However, a common difference between these and other long-necked birds is that they retract their necks while fighting, whereas the others extend them.

Both herons and egrets display little sexual dimorphism, with both the sexes appearing alike, particularly in the non-breeding season. Both birds have broad wings with soft feathers.

Now that we’ve covered the basics of their appearance, let’s explore the differences:

The first significant difference between the herons and egrets is size. While there are both small and large species in both groups, the members of the heron family are generally larger.

Another vital difference between these birds is the color of their plumage.

The herons can have a varied plumage coloration, with some of them even being dual-toned on their upper body, such as the Great Blue Heron (Ardea Herodias).

However, the egrets don’t display such a variety; these birds have mostly white or buff plumage.

Although some exceptions are there, the egrets usually possess a thicker neck than the herons.

Additionally, six species of egrets are capable of growing distinctively white plume feathers during the breeding season. This quality is not so profound in the heron group; herons are more likely to have crests than plumes.

Lastly, all egrets have black legs, while the legs of the herons are usually yellow. The beaks of the egrets are also considerably lighter than that of the herons.

There are a few other minor differences between these waterbirds that can set them apart from other than their appearances.

The first is diversity. Since the heron species are obviously larger in number than the egrets, they have more diversity.

Herons also have a peculiar nesting habit. Despite their size, these birds prefer to nest at a certain height, such as treetops. Their nests are known as “Heronries.”

On the other hand, the egrets share no such reservation and nest lower, closer to the ground. These birds usually build their nests in the shrubs around the shallow water.

Other than that, they might choose to nest in the thickets, too, at a safe distance from the water.

When it comes to flight, these birds are different from each other as well. The herons are much better at flying than the egrets. Herons have a clean flight, while egrets are sloppy fliers. Their legs keep shaking throughout the flight.

This article discussed some of the major differences between the two waterbird species, egrets and herons.

Although they both belong to the same family, Ardeidae, they have some quite obvious differences, once you know where to look for them. Their appearances, particularly their coloration and height, can be used to tell them apart.