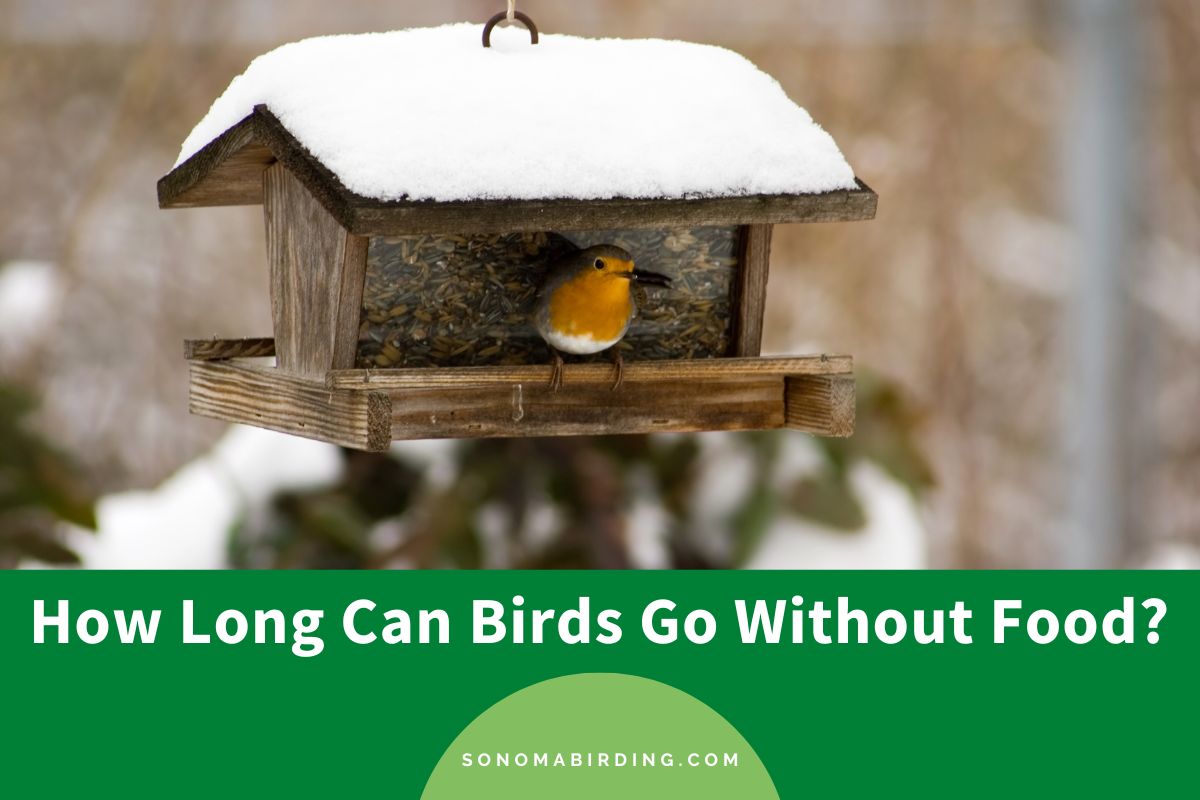 As a bird lover, you know that keeping your feathered friends well-fed is essential to their health and happiness. But have you ever wondered just how long birds could go without food? The answer may surprise you. In this post, we’ll explore the fascinating topic of bird fasting and uncover the impressive feats of endurance that some birds are capable of.

To answer this in brief, the length of time that birds can go without food varies depending on several factors, including the species of bird, its size, body condition, and the weather. A young chick can only go for a few hours without food, whereas a medium-sized songbird can survive 1-2 days without food. The raptors can go for 2-3 days without food. In general, smaller birds have faster metabolisms and may need to eat more frequently than larger birds. In addition, birds that are breeding or molting may have higher energy requirements and may need to eat more often.

We’ll explain it in detail below. So, grab your birdseed, and let’s dive in!

Contents show
Do all birds have the same timeline of survival without food?
Factors that are essential in considering how long a bird can go without food
1. Species and size
2. Diet
3. Age
4. Fat reserves
5. Level of activity
6. The climate of their surroundings
7. Season
Related Articles

Do all birds have the same timeline of survival without food?

Before we proceed to answer the question that has been on your mind, let’s ask you one of our own: Do you think that the time period of survival without food is the same for all birds? We’re hoping you said no, because if your answer was a yes, you’d, unfortunately, be wrong.

The avian kingdom is a large and diverse one, with birds as small as a dime to ones so large they’re incapable of flight! And size is just one of their diversifying factors.

Different birds reside in different parts of the world, have different lifespans, diets, and lifestyles. It’d be insane to expect them all to have the same level of tolerance toward starvation, wouldn’t it?

Before we talk about how long birds can go without food, we’ll learn about the factors that influence it. Let’s get started, shall we?

While various factors determine the time period of a living being’s ability to survive without, among birds, the seven factors we’ll discuss below are seen to play a major role. Let’s explore what these are and how they work now:

When considering how long an individual bird can survive without food, the most important thing to keep in mind is its species. Not all species show the same endurance towards food scarcity, and size is often seen to play a key role in it, and here’s how:

Smaller birds, like the hummers, can’t even go a day without food, whereas larger birds, like hawks and eagles, can easily survive a couple of days. In fact, some penguin species survive without food for months when they reproduce and lose half of their body weight in the process.

Diet is another important factor that affects a bird’s ability to survive without food. Researches show that carnivores tend to have a higher metabolism rate than herbivores, which applies to both animals and birds.

In other words, birds that feed solely on seeds, grains, or fruits will have a lower metabolism rate than those that feed on insects and other living creatures as well.

Keeping this in mind, if a granivore and an insectivore bird both face food scarcity, the former is more likely to last longer.

Do you agree that an adult could go without eating for much longer than an infant or a child? Well, the same is true for all species of the animal kingdom, be it a reptile, a fish, or a bird.

However, when it comes to food and nourishment, be it precocial or altricial, all offsprings are dependent on their parents. And because they grow quickly, their food requirements in the initial days of their birth are much higher than the adults.

In other words, an older bird can survive without food much longer than a fledgling or even a juvenile.

Do you know how starvation works? When you stop consuming the calories that your body needs to perform its day-to-day functions, your body seeks other ways of generating energy and using your fat reserve tops that list.

Wondering what fat reserves are? Well, when you intake more calories than your body needs in a day, all those spare calories are stored in other parts of your body as fat, creating a fat reserve.

Birds that eat well (and appear plump) have fat reserves in their body as well. In times of low food availability, they can break down the fat reserved in their body to sustain themselves. This indicates that a bird who has eaten plentily in the past is likely to survive longer in the absence of food than those who always eat minimal food and have lesser fat in their body.

Who do you think would need more food: an athlete or someone working a 9-to-5? We’re sure your answer was the latter, and we agree. It is because the more active our lifestyle is, the higher amount of food we’d need to support it. The same rule applies to birds.

In a study conducted on the Red-winged Blackbirds at the University of Texas, we found that in an active state, they could survive 1-3 days without food, while in a state of rest, this period was extended to 5 days.

This mechanism is also at play during hibernation, wherein creatures adopt a passive lifestyle and minimize their movement to survive without food.

6. The climate of their surroundings

So far, we’ve taken into consideration all the internal aspects of birds’ own anatomy and bodily changes that affect their ability to live without food. However, there are several external factors that influence it as well.

The climate of a bird’s surroundings is one such factor. As you might know, temperature plays a key role in metabolism. A higher temperature means a higher metabolism rate, which means the species that inhabit warmer and tropical environments have a faster metabolism and will find it challenging to survive without food.

So, does that mean that birds that inhabit high-altitude areas can go longer without food? No, that’s not how it works. Wondering why? Well, in high-altitude areas, where the external temperature is already too cold, birds need to regulate their body temperature on their own, for which they’d need double the amount of food than low-altitude birds.

To sum it up, any bird living in extreme climates (be it hot or cold) requires more food for survival than birds living in moderate climates. Therefore, in case of a food crisis, the latter have higher chances of surviving longer.

We just discussed above how temperature affects the diet of birds and their ability to survive without food. Wondering how that’s different from seasonal changes? Well, it’s different because the seasons we’re going to talk about here are not summer, winter, or spring; our topic of discussion here is the breeding and non-breeding seasons of the birds.

Here’s how it works:

During the breeding season of birds, they need more energy in order to engage in courtship rituals, build their nests, reproduce, and tend to their hatchlings. Whereas, during winters, no such activity takes place, which means their energy requirements are considerably lower during this period.

So, if a bird faces a food crisis, they’re more likely to outlast it in winter than in summer. Unless, of course, they live in an extreme climate (as we’ve talked about above).

Why Do Birds Bob Their Heads?