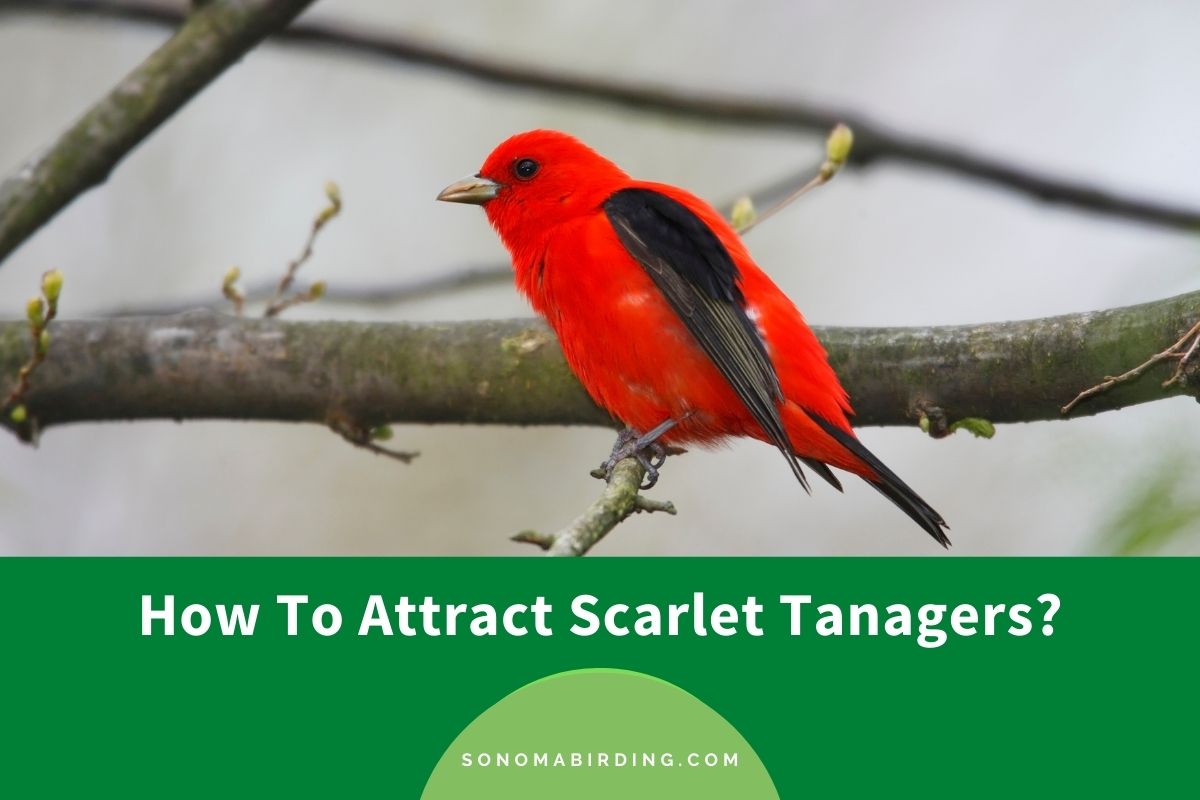 If you’ve ever heard the song of a scarlet tanager, you would definitely want them to frequent in your yard. These birds have an exceptionally melodious voice and have a vibrant orange plumage that is quite pleasant to look at.

However, luring them into your yard can be difficult. These birds are not like the other backyard birds and prefer to nest in the safety of dense deciduous forests.

Here are 5 effective ways to attract scarlet tanagers to your yard:

Are you planning on attracting scarlet tanagers in your garden but can’t seem to figure out how? If these birds are found in abundance where you live, you can do things to lure them in, and we are going to about them in this article.

Before you try to attract scarlet tanagers, let’s make sure you can identify them easily. These medium-sized songbirds can be confused for orioles from a distance, and if you don’t want to make this mistake, here’s everything you need to know.

Scarlet Tanagers (Piranga olivacea) range between 6-7 inches in size, with both sexes having a similar length. The major differences between them can be seen in the plumage of the adults.

The adult males sport a bright red body, with black wings and tail, and a whitish bill. The plumage of male scarlet tanager outshines that of even the northern cardinals and summer tanagers.

They molt twice in a year, once before starting their southward migration and another before returning home, so that they’re fully groomed by the beginning of the breeding season. And this is no coincidence; their vibrant plumage does play a key role in attracting a suitable mating partner.

While you can easily recognize the male scarlet tanagers in their summer plumage, they appear slightly different when they molt. During these months, you might find patches of olive green or yellow throughout their body (more prominent in some individuals than others).

Some of them might even appear sickly at times, but you needn’t worry; it is just a part of the process. Come spring, they will get back their striking scarlet plumage.

The female scarlet tanagers have no hint of scarlet or red anywhere on their body. These birds have an olive-colored upper body, with their undersides have a pale yellow overtone.

Their wings and tail are a darker blend of olive and yellow. The females appear the same throughout the year, with the coloration of the plumage remaining unaffected by molting.

The juvenile scarlet tanagers take after their mothers and have a dull, greenish-yellow body; only they have a slightly smaller body. It is not until they undergo their first molt that the males begin to grow their signature red plumage.

When can you see Scarlet Tanagers?

As you might already know, like most songbirds, the scarlet tanagers are also migratory birds that cannot be found at the same place throughout the year. Wondering when these birdies are most likely to venture into your yard? We’ll tell you.

Scarlet Tanagers spend most of their breeding season scattered around the eastern regions of North America. These birds build their nests in the canopies of large deciduous forests, preferably dominated by oak trees.

Although mature forests are where they belong, you can occasionally find them nesting in young woodlands, cemeteries, and even suburban areas with a dense tree population.

If you reside in any such suburb or at a forest’s edge, you might attract the tanagers to your yard during these months.

During the winters, these birds migrate south to the northwestern regions of South America, where they mostly inhabit the Andean foothills’ montane forests and the lowland rainforests of the Amazon Basin.

They pass through Central America twice a year, as it falls on their migration route. If you live here, you can catch them in October, when they’re heading south, and in April, on their way back north.

Luring them in with their favorite food

Most bird enthusiasts believe that oranges are the only way to attract the scarlet tanagers to your yard. However, that’s far from the truth.

Did you know that these birds are primarily insectivores and only resort to fruits when they face a shortage of insects? If you are familiar with the diet of these birds, you will have better chances of luring them into your yard than those who offer them only oranges.

Scarlet tanagers feed on various insects, such as butterflies, moths, ants, bees, wasps, hornets, beetles, flies, and scale insects. Mealworms are one of their favorites, and since these are easy for you to procure as well (both dried and live), you can use them to attract tanagers.

These birdies are also fond of berries like chokeberries, mulberries, strawberries, blackberries, juneberries, huckleberries, and raspberries. Offering them these berries is also known to attract them to your yard. Scarlet tanagers also find jelly appealing, particularly grape jelly.

Because scarlet tanagers are omnivores, offering them suet is also a good idea. It will be more helpful to them during winters when they switch their diet to fruits and could benefit from a little animal protein. We would recommend to you offer them berry suet, as they’re quite fond of berries.

Feeders that work well for these birds

If you pay attention to the last section, you will notice that due to the diversity in their diet, you can use various types of feeders for them effectively.

These birds can easily feed through a fruit feeder, regardless of being pole-mounted or hanging, as long as they can find a perching space. During winters, you can put out suet feeders for them as well.

Following are some pointers that might come in handy while selecting and setting up their feeders:

Scarlet tanagers are the kind of birds that are not used to living around humans and prefer to be surrounded by a natural environment. Therefore, if you can make them feel at home in your yard, your chances of attracting them increase manifold.

But how would you create a tanager-friendly landscape in your yard? By planting any tree? No, not really. Before you start renovating your yard for them, take a look at the plants and trees that appeal to them the most:

Vines and shrubs that can attract them

Don’t overlook the importance of a water source

Did you know that a water source is the first thing scarlet tanagers look for when picking a nesting site? Water is essential to their survival and can, therefore, work as a deciding factor for them to visit your yard.

Here are few things you must keep in mind while offering a water source to the tanagers:

Can birdhouses help you in luring scarlet tanagers to your yard?

Yes, they can. Providing the right kind of shelter plays an essential role in attracting scarlet tanagers, and a birdhouse can offer them exactly that.

However, when you’re setting up a birdhouse for them, make sure that it is safe from all kinds of predators that can prey on their eggs and fledglings.

Do the male scarlet tanagers help their partners in nest-building?

No, the males do not participate in the process of nest-building as well as incubation. It is because their bright plumage might draw the attention of predators to their nests, threatening their eggs and fledglings. However, the males do protect the nesting site fiercely.

How many broods do the scarlet tanagers raise in a year?

Scarlet tanagers raise only a single brood every year, with their clutch size ranging between 3 and 5 eggs.

Conclusion: How to attract Scarlet Tanagers to your yard?

Scarlet tanagers are not the birds commonly found in backyards, which you have to keep in mind while trying to attract them. It is possible that your efforts at luring them might not come to fruition.

However, if you’re living in the right locality and are doing everything we have discussed above, the probability of these birds venturing into your yard will increase significantly.