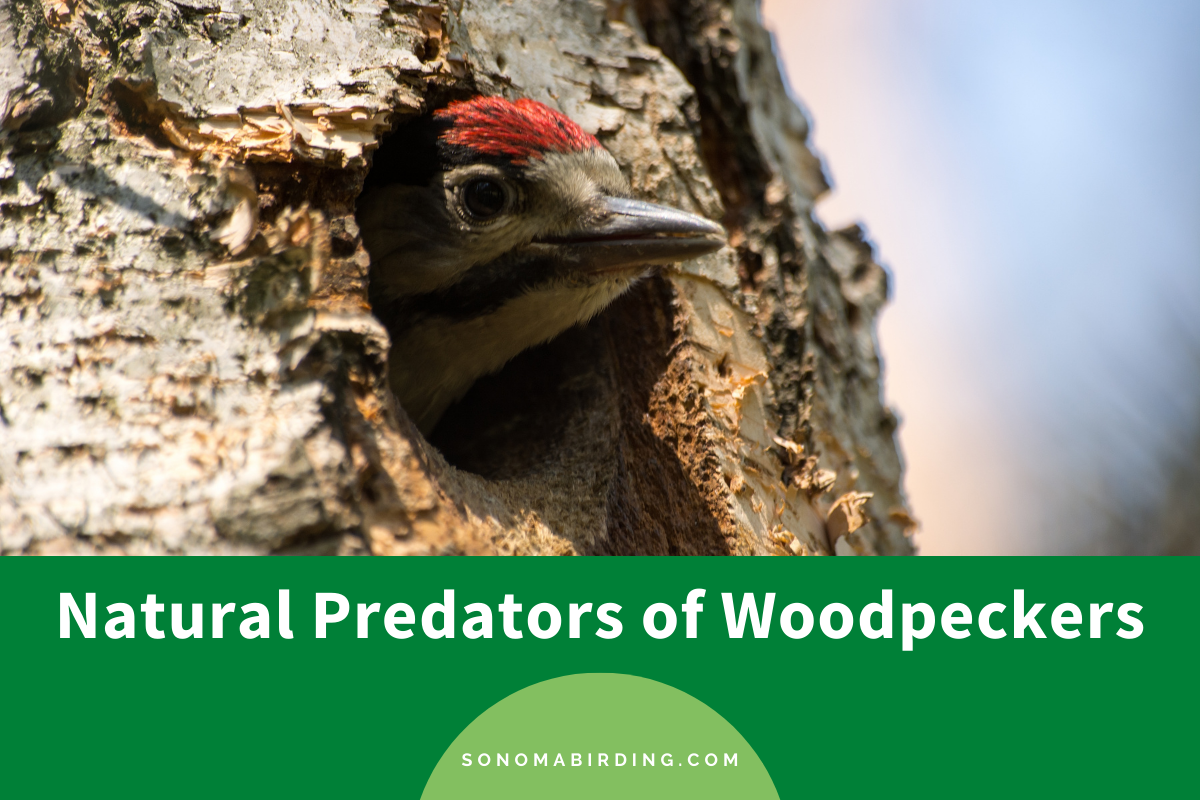 Woodpeckers are medium-sized birds that are well-known for their characteristic pecking behavior. They have vibrantly-colored plumage, with most of them being olive and brown, and some with patterned red and white, and black. Many species of woodpeckers even sport tufted feathers on the top of their heads, resembling a crown.

Unfortunately, a number of woodpecker species in the world are endangered today, mostly due to predation by other, larger creatures in the wild catalyzed by habitat loss due to human activities. If you are wondering what are the natural predators of woodpeckers in the wild, this article is for you.

Here’s a list of all the natural predators of woodpeckers:

While measures have been taken by governments to stabilize the population of woodpeckers, not much can be done about the natural food chain. Stay with us till the end of this article, and we’ll tell you everything you need to know about the predators of woodpeckers, their eggs and nestlings, and much more.

Birds that prey on woodpeckers

In this section, we will discuss the birds of prey that pose a threat to the woodpeckers. But before we proceed to that, let us conceive a fair idea about what a “bird of prey” means.

Birds of prey are those bird species that hunt other birds, reptiles, or mammals for their nutrition. An important point to remember is that these birds do not feed on dead creatures (except the vultures). They only eat the prey that they have taken down themselves.

Now, we know that hawks are apex predators. They prey on more than 100 species of other birds, including woodpeckers.

We know that raptors have physical features that help them hunt other birds: their talons. These talons are sharp, strong claws that help them get a hold of other birds and take them down in a few minutes. The limbs of a raptor consist of three frontal and one posterior talon that effectively works in gripping sitting as well as flying birds.

Interestingly, in the case of hawks, another important factor comes into play. Hawks use seven different types of killing mechanisms to catch and kill a bird. And since woodpeckers are not very fast birds, these mechanisms work very efficiently on them.

Do you know which bird species come to the minds of most people whenever they hear the phrase “bird of prey?” Eagle. Wondering why? Well, eagles literally prey on every other bird they can get hold of. Thus, it shouldn’t come as a surprise that eagles prey on woodpeckers, even the larger species, like the ones belonging to the Dryocopus genus.

While we have often witnessed large woodpeckers put up a terrific fight when eagles attack them, they hardly ever emerge victoriously.

Eagles, when they catch a woodpecker, kill them within minutes. As discussed before, they have three equally sized frontal talons and one large posterior talon, and woodpeckers cannot compete with these.

But when a flock of woodpeckers attacks an eagle, the eagle is bound to lose. Woodpeckers do this when they have to save their eggs and nestlings from an eagle. You see, this is the power of numbers in the aviary world. When a large number of medium-sized birds attack one large bird, the flock always wins the fight.

Just like eagles and hawks, falcons are also a group of raptors. While they feed on woodpeckers whenever they can get a hold of them, such a thing happens very rarely in the wild.

The Peregrine falcons feed on birds of almost all species except the apex predators. One of their primary hunting styles is defined by their tendency to chase and hunt the birds, particularly woodpeckers, in flight. Peregrine Falcons are rarely spotted chasing any terrestrial bird.

These falcons, like all raptors, possess strong talons that help them hunt their food. They’re strictly carnivorous and feed only on freshly killed birds. One of their traits while catching woodpeckers involves chasing non-migratory dark-spotted woodpeckers.

However, as mentioned earlier, falcons rarely prey on woodpeckers. The frequency of hawks preying on woodpeckers still stands at the highest.

Grackles are considered one of the biggest bullies in the aviary world. These birds are large and often bully other small birds, not out of the necessity of preying on them but just because they like to.

The usual diet of grackles mainly consists of seeds and fruits, but sometimes they can also be seen going after woodpeckers. The most common reason for grackles to chase down woodpeckers involves the safety of their eggs and nestlings. It is not a surprise that woodpeckers feed on other birds’ eggs.

This vividly gives us a picture of how woodpeckers and other birds behave while chasing for food. The birds of prey look for small, weak birds who are flying or resting alone. On the other hand, the small birds avoid interrupting large birds but will voluntarily take up a fight with them when it comes to the safety of their eggs and nestlings.

Now, let’s move ahead and read about the one reptile that is powerful enough to scare the aviary species and humans. You might’ve guessed by now, but we’ll discuss it in detail in the upcoming section.

Many reptiles feed on birds and other reptiles. But the ones that we will talk about in this section are snakes. While snakes have vibrant and colorful skin, don’t let it distract you from the real danger. Snakes are a threat to humans, birds, reptiles, and mammals. However, today, we are only concerned with snakes attacking woodpeckers.

Woodpeckers are a common target for these slithering creatures. In fact, even the eggs and the nestlings of the woodpeckers are not safe from the threat of these reptiles.

As you might very well know by now, woodpeckers mostly live on trees. What might be lesser known is the camouflaging techniques used by snakes to trick their prey into their trap.

While attacking a woodpecker, all snake has to do is blend itself with its surroundings and wait for an innocent woodpecker to land near its range. The snake then attacks the bird and slowly wraps its long body around it. Once gripped properly, the snake slowly contracts its body around the woodpecker, killing it efficiently.

There are many more interesting tactics that are used by snakes to lure in their prey. One known attacking mechanism frequently used by snakes is disguising their tails as worms.

As you may or may not know, worms make up a big part of the woodpeckers’ diet. Snakes take advantage of this fact, using their worm-like tails to lure the woodpeckers in.

Now that we have covered how snakes kill woodpeckers, let’s move on to mammals that hunt and prey on woodpeckers.

In this section, we will be talking about coyotes, foxes, and bobcats, all of which are fast and deadly hunters that possess the ability to kill large birds like woodpeckers. Keep reading to learn more about them.

When it comes to hunting birds, coyotes target the large bird species that are slow and nest on the ground, such as pheasants and chickens. However, these mammals are surprisingly adaptable and can even climb a tree if they have enough motivation. And since food is a major motivation for all animals, the same is true for coyotes. Once they climb a tree, they’re a threat not just to the woodpeckers but also to their eggs and nestlings.

Foxes are another predatory species of woodpeckers. Their diet consists of birds, reptiles, and other mammals. However, make no mistake; foxes are not carnivores but omnivores. A small part of their diet is also made up of berries and fruits.

Did you know that foxes have a surprisingly rapid metabolism? Because of this lesser-known fact about these canines, they need food at regular intervals to fulfill their appetite. When they are hunting for prey like woodpeckers, these mammals prefer attacking a flock of woodpeckers as opposed to a lone bird. But how do they manage to attack these birds? Let’s find out.

Foxes are clever animals and have incorporated different hunting mechanisms for different types of prey based on size and speed. And as far as woodpeckers are concerned, they don’t have to undergo much hassle.

As you already know, woodpeckers inhabit trees, and foxes, just like coyotes, are brilliant climbers. Therefore, they can simply climb on trees, hide, and wait for these birds to come to their nests or even perch on bark for pecking. Once the woodpecker is in the fox’s reach, they’ll leap right at them.

It is no secret to us that bobcats are some of the finest hunters in the mammalian world. These cat species can jump up to 10 feet when hunting for food. Their significant mechanism of pouncing and killing the prey with one bite is commendable.

Bobcats are one of the most dangerous predators of woodpeckers. They can catch slow woodpeckers using their fast-hunting mechanism, holding the birds in their mouth and using their sharp teeth to kill them within seconds.

Predators of woodpeckers’ eggs and nestlings

So far, we have learned about the various birds, reptiles, and mammals that prey on the woodpeckers, along with the mechanisms they employ for doing so. However, the adult woodpeckers are not the only ones in danger; their eggs and nestlings are also hunted extensively by different birds, mammals, and reptiles.

In this section, we will be discussing the predators of the eggs and nestlings of the woodpeckers.

Much like the adult woodpeckers, the most dangerous predators of their eggs and nestlings are eagles, hawks, snakes, grackles, coyotes, and bobcats. These species actively steal woodpecker eggs.

As woodpeckers live inside the holes of tree barks, the threat to their eggs and nestlings is even greater. This is because besides being in an easily accessible space, they are also the most defenseless. Snakes usually attack the young woodpeckers and their eggs in these nest holes, and so do their other arboreal predators.

As birdwatchers, you might have noticed a roost of woodpeckers attacking an eagle or a hawk to drive them away from their territory. This struggle is generally an attempt to save their eggs and nestlings, in which the woodpeckers might or might not succeed.

In this article, we learned about several natural predators of woodpeckers, which are also why some woodpecker species are endangered. Birds of prey or raptors, reptiles, and mammals: all three were discussed in this article. Moreover, we also talked about their various hunting styles and attacking mechanisms.

How To Attract Woodpeckers To Your Yard? (4 Effective Ways)

How To Get Rid Of Woodpeckers? (7 Effective Measures)

Do Woodpeckers Mate For Life?