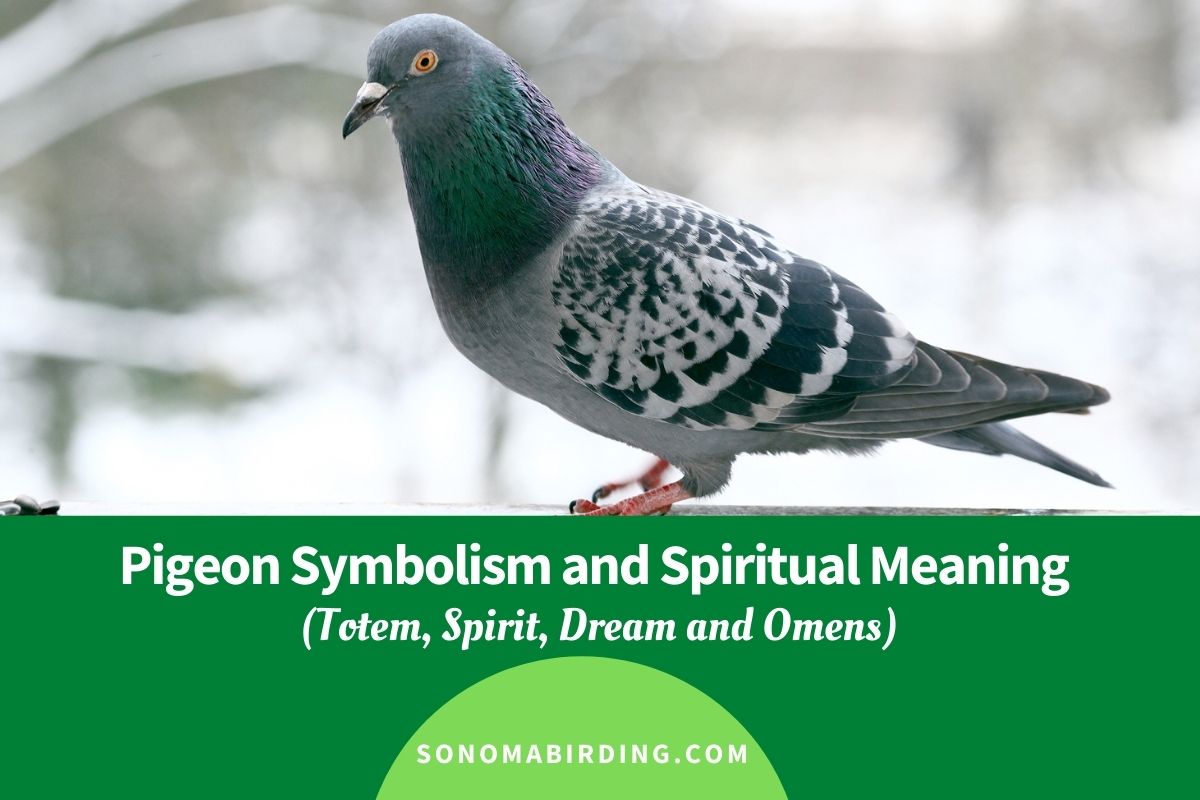 Those who have a strong spiritual interest or connection with the Universe have been known to see a lot of symbolism in everyday things. The Pigeon has been with us since our ancient beginnings. They have been a source of inspiration, information and even served as messengers of the gods.

Their presence seems to appear when we need them most and their symbolism runs deep. I’ve spent many hours researching the meanings behind this bird and I’d like to share what I’ve discovered so far…

What do pigeons symbolize? Pigeons are symbolic of fertility and prosperity, fortune, luck, and transformation. They’re said to be one of the first bird species to be domesticated by humans and have been friends to us since ancient times. These birds are also symbolic of persistence, harmony and well-being, mercy and forgiveness, and freedom.

The Pigeon is an important symbol in the traditions of many different cultures from around the world. In religious symbolism Pigeon features in Hinduism, Buddhism, and Christianity. The pigeon has a long history of association with gods, goddesses, and spiritual teachers of many traditions.

Let’s explore the symbolism of pigeons in detail, learn about their dream interpretations, and have a deeper understanding of their superstitions, totems, and spirit animals.

It might come as a surprise to many, but pigeons, along with all the other members of the Columbidae family, are different from other bird species because, in their family, both the males and the female parent pigeon can produce crop milk for their younger ones. Due to pigeon’s ability to be able to take care of their babies, these birds stand for nurturing and caring.

Have you ever heard of the ancient tradition of using pigeons as posts? Although it might sound hilarious today, it is an age-old practice that was perhaps initiated by the Persians. After the Persians, this technique was used by the Romans, the Greeks, in Baghdad, and many European countries afterward.

It begs the question: why would people pick pigeons out of all the birds they could have used for the purpose? Because they believed that these birds would deliver their letter to their rightful recipient and return back home. This is the evidence that pigeons are symbolic of perception.

Pigeons are also symbolic of faithfulness and commitment. It is because they’re one of the few birds that are known to mate for life. If one of them dies, the other spend their remaining life in agonizing loneliness. Their monogamous nature is mostly why doves and pigeons are considered sacred symbols in a wedding ceremony.

The pigeon totem will enter your life when you’ve been good to others for too long and have only received hurt, betrayal, and disappointment in return.

When you find yourself in such an unfortunate position, you begin to lose faith in goodness, in humanity. Every good deed you’ve done begins to haunt you, and you drain yourself out in an effort to block out all these thoughts.

The totem of pigeons will appear in your life to restore your faith in everything good in the world. Your soul might have been in a dark place for too long, but their totems will guide it back to the light.

They will show you how kindness always pays off, sooner or later. Under their influence, you will grow to be wiser and more patient.

Most of the superstitions revolving around pigeons have their roots in Christianity. Many Christians believe that to see a solitary pigeon perched on a chimney is a bad omen. The lonely pigeon you have seen is symbolic of death.

Then there are those who practice the tradition of setting pigeons free during a funeral of a loved one, considering them to be the souls of the deceased, now free to move on to the afterlife.

One of the hilarious superstitions attached to these birds is that it symbolizes good luck if they poop on you. While most people discard this superstition, calling it ridiculous, some firmly believe in it.

Due to their widespread population, pigeons are basically found in every part of the world. Seeing them is a common affair, and so is dreaming of them. But have you ever stopped to wonder if these dreams could have a deeper, hidden meaning for you?

While each individual dream has its own unique meaning, we have curated a list of the most common pigeon dreams people seem to have, along with their interpretations. Take a look:

If you see a pigeon flying in the sky in your dream, it suggests that very soon, your children or younger siblings will ask you for something which you wouldn’t be able to say yes to. If the pigeon in your dream seems to be flying away from you, it is a sign the other person would not take your refusal well and might act out in the future.

Dreaming of feeding a pigeon is a warning. Such a dream is a sign that you might be putting your trust in the wrong person; they might betray you in the worst way possible.

Shooing a pigeon away

If, in your dream, you see yourself shooing a pigeon away, it is symbolic of your self-centeredness. Your dream is a sign that you constantly put yourself before people who care for you, and the people around you are not happy about it. If you keep up this behavior, you might end up losing some of these people.

Dreaming of killing a pigeon is not a good sign. Such a dream indicates that you will soon argue with a close friend who has always supported you in your difficult times. In the heat of the argument, you will say something hurtful that you can’t take back.

A pigeon falling down the sky

It is not common to see a pigeon falling down the sky mid-flight. If you dream of such a thing, it suggests that you might receive some bad news shortly; something that you’ve been preparing or waiting for a long time would be postponed or called off.

Dreaming of catching a pigeon is symbolic of your incredibly shy nature. Such a dream indicates that you’re the kind of person who is talented and still wants to stay in the shadows. Perhaps now would be the right time for you to give others a chance to appreciate you for who you really are.

Dreaming of a dead pigeon has a bad interpretation. Such a dream indicates that you will find yourself in a difficult situation very soon and would need the help of someone in your social circle, and the person would abandon you in your hour of need.

Pigeons have always had a rich symbolism in different religions and civilizations, which is why their tattoos are very popular among people. Since these birds are considered to be sacred in Christianity, a vast population of devout Christians gets them inked on their bodies.

Another symbol that is commonly associated with most birds, including pigeons, is freedom; people who want to attain ultimate freedom in life are more likely to get their tattoos.

Pigeons also live in large communities and have great social skills. Their tattoos could, therefore, be symbolic of the strength and values of a community. The image of a white pigeon holding an olive branch from Noah’s story is a remarkable symbol of hope and can, thus, be seen inked on many people’s bodies.

The Cultural Significance Of Pigeons

For those of you who don’t know this, both the pigeons and the doves are considered to be the successors of the Rock Dove and are, therefore, close relatives. In this connection, both of these birds could be said to have the same cultural significance. Below, we will discuss how different cultures and civilizations in the world perceive them:

If you’re someone who is able to keep a positive mindset even in the darkest times, the spirit of pigeons might be guiding you. Such people have a heart of gold and very kind and supportive towards others. They have an innate urge to take care of others; if you are their friend, you can always count on them to have your back.

Governed by the pigeon spirits, these people have the inability to say “no” to anything or anyone because they’re either too polite or too intimidated by the idea of rejection and refusal.

This tendency often leads them into troublesome situations, more often in their workplace, where their colleagues and superiors burden them with far more work than they should.

Another important quality in the people guided by the pigeon spirit is their persistence. These people have a stubborn personality and won’t give up on something, no matter how many times they have failed.

Their commitment towards things or people is far stronger than their fear of failure. They have admirable willpower that makes them stand squarely in the face of all the challenges and adversities that life throws at them.

More than anything else, the pigeon-spirited people have the potential to become excellent parents. They’re not just protective of their children, but also want to be a part of their lives. They’re the kind of parents that have long, meaningful conversations with their younger ones, sharing their experiences and winning their trust.

They’re forgiving, understanding, and supportive of their child, and often raise them to be extraordinary human beings.

When Should You Call Upon The Pigeon Spirit Animal?

If you’re going through any of the following circumstances, you can call upon the pigeon spirit to guide you towards the right path:

Pigeons are a common sight in cities and towns all over the world. They have been domesticated as pets, taken along on warships, and used for their meat and feathers by many cultures throughout history.

Throughout human history, pigeons have symbolized love, peace, compassion, wisdom, and power and have been honored as sacred messengers from the gods.

The most common pigeon symbolism and spiritual meanings in the ancient cultures that worshipped pigeons were of good luck, divination, healing, peace, and happiness.