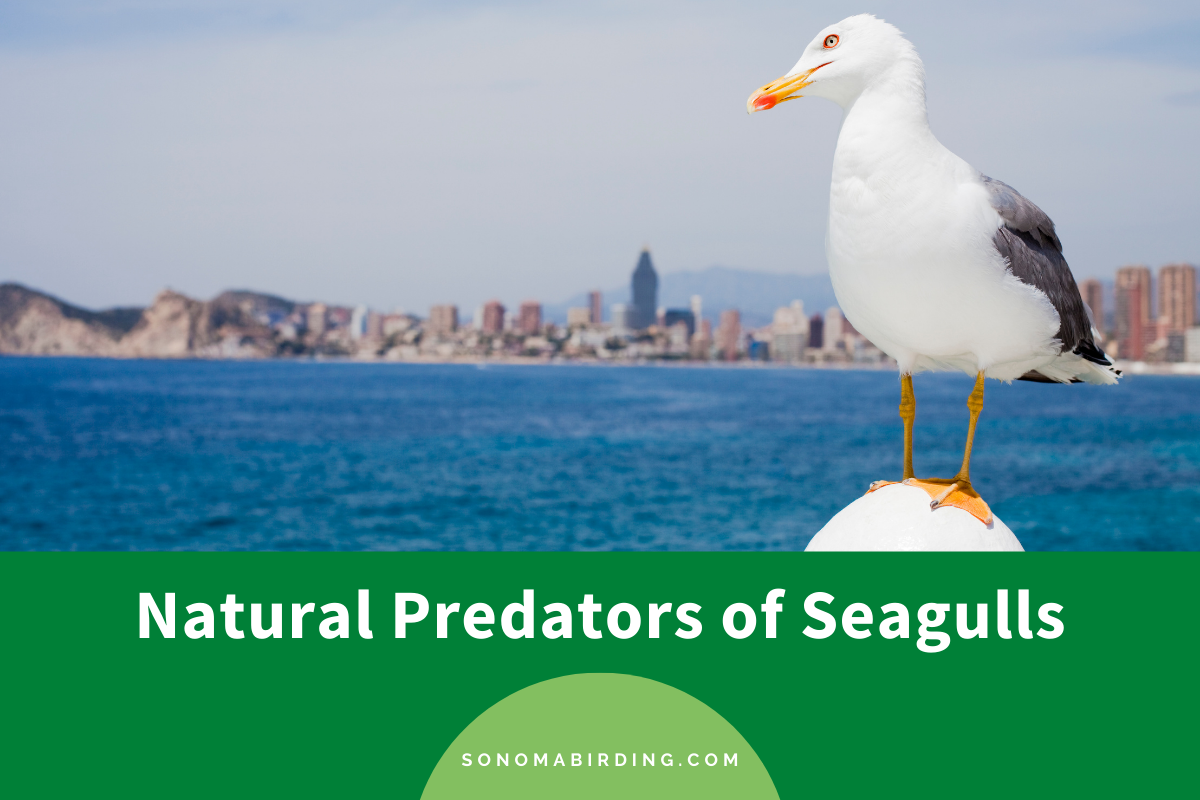 Seagulls are large, aquatic birds with a typical white body and grey-to-black plumage. While these birds might seem ordinary at first glance, don’t make the mistake of underestimating them. These are extremely clever creatures with great memory and highly evolved communication skills, using both their body movements and vocalizations.

To top it off, seagulls are also quite flexible and can survive on both freshwater and seawater. However, despite all these qualities, they still end up falling victim to a bigger, stronger predator every now and then.

While it is easy to imagine how a bird can prey on the seagulls, can you guess how terrestrial and aquatic creatures can possibly hunt them? Well, we wouldn’t want you to keep guessing and come bearing the answers to all these questions. Keep reading to learn all about the seagull predators and how they manage to hunt these birds.

Aviary Predators: Birds of prey that hunt the Seagulls

As an avid birdwatcher, you must have already figured out that birds are usually the biggest predators of other birds. It is because, as a general rule, birds are mostly inaccessible to the terrestrial or marine creatures because of their inability to fly, which makes other, more dangerous birds their most common predators.

And when it comes to predatory birds, the first name that comes to mind is the birds of prey or raptors. While identifying the meaning of these predatory, carnivore birds, it becomes important to mention all the prominent members that belong to this family, including Eagles, Vultures, Falcons, and Hawks.

Eagles are one the most widely known apex predators in the avian world, and that’s why we will start with them. Keep reading ahead to learn about all the birds of prey that feed on seagulls.

It is no surprise that eagles prey on seagulls since these raptors prey on almost every bird in the world. Having almost no other creature (except humans) to hunt them down, eagles enjoy a terrific lifestyle, hunting and preying on different birds, including seagulls.

Eagles possess better physical characteristics than seagulls in all aspects, including strength and speed. This makes seagulls an easy pick for the eagles.

An eagle generally attacks seagulls when they are roosting in flocks, going after the one that is slightly away from the roost. This tactic makes it easier for eagles to catch prey without facing the flock’s defense.

Eagles are considered one of the most common predators of seagulls. These raptors possess limbs built with strong talons that play an integral part in attacking and killing seagulls.

Hawks are also categorized as the most dangerous raptors and are generally placed right after the eagles. They are infamous for their extreme methods of killing and hunting other creatures. Hawks also prey on seagulls and their young ones.

Just like other raptors, the hawks also possess strong and sharp talons that are used for hunting. However, it is interesting to note that hawks are seen to use seven different methods for killing birds, changing methods based on the size and speed of their prey.

Seagulls are an easy pick for fierce raptors like hawks, but we have noticed one common tendency of hawks while attacking almost every bird. They usually attack the birds found at the edge of a roost or are away from the central crowd. Although it is not a surprise that in a one-to-one fight with seagulls, hawks will win, hawks don’t prefer wasting energy over fights.

Another fascinating fact about hawks is their surprisingly low success rate in hunting. Although hawks use seven different hunting mechanisms, their success rate while hunting is only 10%.

If we’re talking about the dangerous raptors, we cannot possibly overlook the falcons, another bird of prey that is extremely treacherous to the seagulls and their young ones. Wondering why? Let’s find out by reading ahead.

Falcons are faster and larger than seagulls, almost twice their size, which gives them an upper hand over the latter. However, the more crucial factor that works in favor of the falcons is their talons. Like all other raptors, Falcons have three frontal and one posterior talon that helps them get a fierce hold over their prey.

Once captured, a falcon will squeeze the seagulls unless they stop breathing, which is a killing mechanism that’s common among all raptors. Much like other raptors, the falcons also go for the seagulls that are not roosting in a flock.

A group of seagulls is powerful enough to chase away falcons. Thus, a seagull wandering alone on the beach or flying in the sky is at the highest risk from the raptors.

In the previous section, we learned about the birds of prey that attack seagulls. But did you know that these feathered creatures can also be hunted down by mammals? Well, you will be shocked to find out how mammals can prey on seagulls while wandering on the land.

Let’s get started with discussing different mammals that feed on seagulls:

Can you guess the most dangerous thing about weasels? They hunt in groups. Yes, weasels are categorized as one of the biggest predators of seagulls. They are quite small animals, but their tendency to hunt in groups makes them powerful.

Weasels would not stand a chance of killing seagulls if they attempted to hunt these birds alone. But as they move around in groups, they can not only kill a seagull but a whole flock of them. Weasels also prey on seagulls’ eggs and nestlings. They are always on the lookout for an opportunity, and as soon as they land one, they act quickly, attacking their eggs and nestlings.

Weasels have a rapid metabolism rate and, thus, require food very frequently. To fulfill their appetite, weasels feed on almost anything that comes their way. Their primary food consists of rats, rabbits, birds, and frogs, including the eggs and young ones of these species.

We already know that foxes are carnivores that prey on a large number of birds and other animals. However, foxes usually live near the urban setup as it has more abundant food sources. On the other hand, the gulls are aquatic birds found nowhere near urban settlements. Are you wondering how foxes can prey on seagulls?

Well, foxes and seagulls rarely cross paths in the wild. But when they do, it seems quite obvious which one would win between the two. In fact, foxes might even attack gulls when they are roosting in a flock as they have a stronger killing mechanism and can easily kill a number of seagulls.

Foxes like to have abundant food for themselves and, thus, hunt more often. Although quite rare, foxes are a threat to the gulls. On the other hand, our feathered friends have learned to combat the foxes before their arrival. Whenever a group of seagulls notices cartilage of their own species lying around, their reflex tells them to be cautious. Thus, they make necessary arrangements to save themselves.

Now that we’ve learned about foxes and weasels, the two primary terrestrial predators of seagulls, let’s move on to the aquatic creatures that are a threat to the birds.

Aquatic Predators: Marine creatures that are a threat to Seagulls

Well, it goes unsaid that a marine bird will have aquatic predators. Seagulls have prominent aquatic predators who can hunt and kill them within seconds. Wondering which aquatic creatures prey on seagulls and how they attack these birds? You can find out the answers soon if you keep reading.

Here are the primary aquatic species that seagulls must be careful of:

Among all the aquatic creatures we are going to discuss here, sharks are the most dangerous predators to seagulls. We already know that sharks are carnivorous fish belonging to the Lamnidae family that heavily rely on meat for their nourishment. It is also common knowledge that these fish are apex predators. Thus, it must come as no surprise that they can gulp seagulls at once.

Are you wondering how do sharks catch the gulls? Well, as you already know, seagulls wander over the sea and beaches looking for food. Sometimes they fly too close to the surface of the sea, which is where all the trouble begins. Once a shark locates a seagull, it takes a deep dive out of the sea and catches the bird. But how do these large fish locate a seagull within such a short span of time?

Well, sharks have surprisingly strong eyesight that allows them to see clearly from a distance of over 10-15 meters. Therefore, even from within the water, they can easily locate a seagull flying too close to the sea surface and attack before they can even realize what hit them.

Anyone who has come across the pictures of a shark will know that they have a huge mouth, huge enough to easily gulp a number of seagulls at once. Thus, when they open their mouth while attacking the bird, the bird has little to no chance of escaping.

Although rare, crocodiles are also found preying on seagulls and their eggs. These deadly, ancient reptiles might be aquatic, but they’re not found in seas. And seagulls, as their name suggests, primarily prefer to inhabit sea beaches, meaning the two rarely cross paths.

Octopus is one of the rarest and most surprising predators of seagulls. It is on rare occasions that people on the beach have witnessed an octopus attack and feed on a seagull. Octopuses are flexible creatures with complex-built bodies, using their tentacles for hunting, squeezing, and constricting their prey.

As octopuses can also walk on the land, it is easier for them to attack a seagull on the beaches. And while seagulls fly away as soon as they are signaled about the presence of a predator around them, sometimes, there isn’t enough time. It is fascinating to watch an octopus using its sensory tentacles to catch a seagull attempting to fly.

Octopuses also have an intriguing characteristic of vanishing into their surroundings. They possess the ability to squish themselves. In other words, a hundred-pound giant octopus can easily fit itself into a small hole in the ground. This gives them an advantage over the seagulls’ ability to fly. Once planned, the octopus can easily capture seagulls inhabiting the land.

Before we discuss dolphins, it is important to mention that dolphins are rarely seen chasing seagulls. However, one can find dolphins teaming up with birds to go fishing together. Sounds fascinating, doesn’t it?

Dolphins have a complicated relationship with the birds; they’re friends with some species and enemies to others. And as we know, dolphins usually dive on the surface of the sea, which is why it’s easier for them to attack a seagull. However, in most cases, dolphins do not attack seagulls to eat them.

Both dolphins and seagulls share a mutual love for preying on fish. Therefore, a fight between them is usually the result of a chase for fish. And when the seagulls go after the same fish as the dolphins, the latter will not hesitate to attack and even kill these birds.

With this, we come to the end of the article. Today, we’ve learned that even birds as smart and capable as seagulls aren’t free from the threat of predation. In fact, these birds, their eggs, and younger ones face the risk of not only the raptors but also other creatures like weasels, sharks, and octopuses.

Seagulls vs. Albatrosses: What’s The Difference?