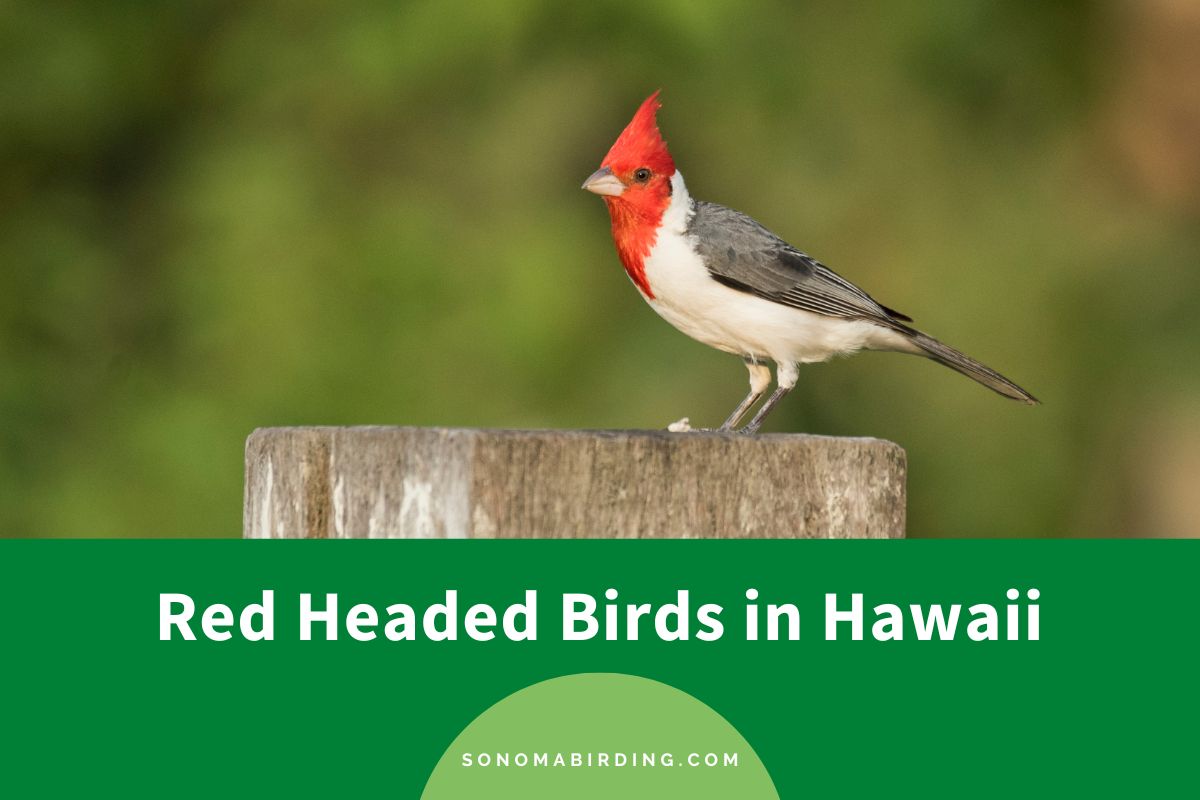 Birds come in colors of all sorts and can appear on all body parts, including the head. This is almost always due to a combination of natural and sexual selection. In this article, we’ll be going over a bunch of red-headed birds in Hawaii.

Keep in mind that throughout this article, some birds may only have their heads red, while others may have their entire bodies red. Regardless if the rest of their bodies are red, as long as their heads are, they’ll be included in the article. 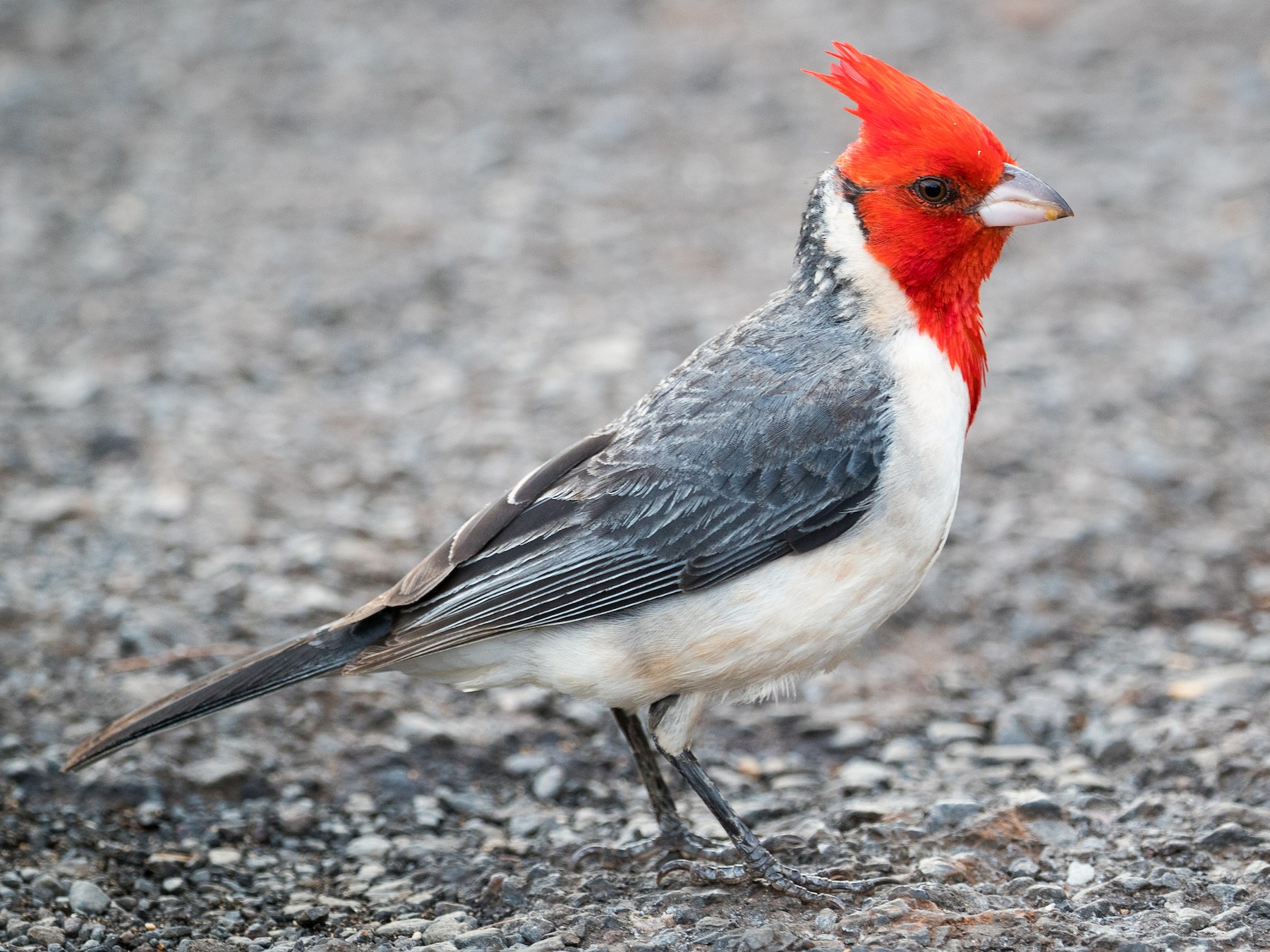 The red-crested cardinal is a songbird with a bright red crest, red throat, a gray back with black wing tips, white underparts, and a pale creamy colored bill. Juveniles are of a duller color with a brown-orange head.

The red-crested cardinal prefers semi-open habitats with shrubs and trees, such as agricultural lands, parks, lawns, tropical shrubland, degraded forests, and other urban areas, where they can typically be seen on the ground.

The red-crested cardinal’s diet consists of a combination of fruit, seeds, berries, and insects. They can often be found foraging on the ground for seeds and occasionally invertebrates. 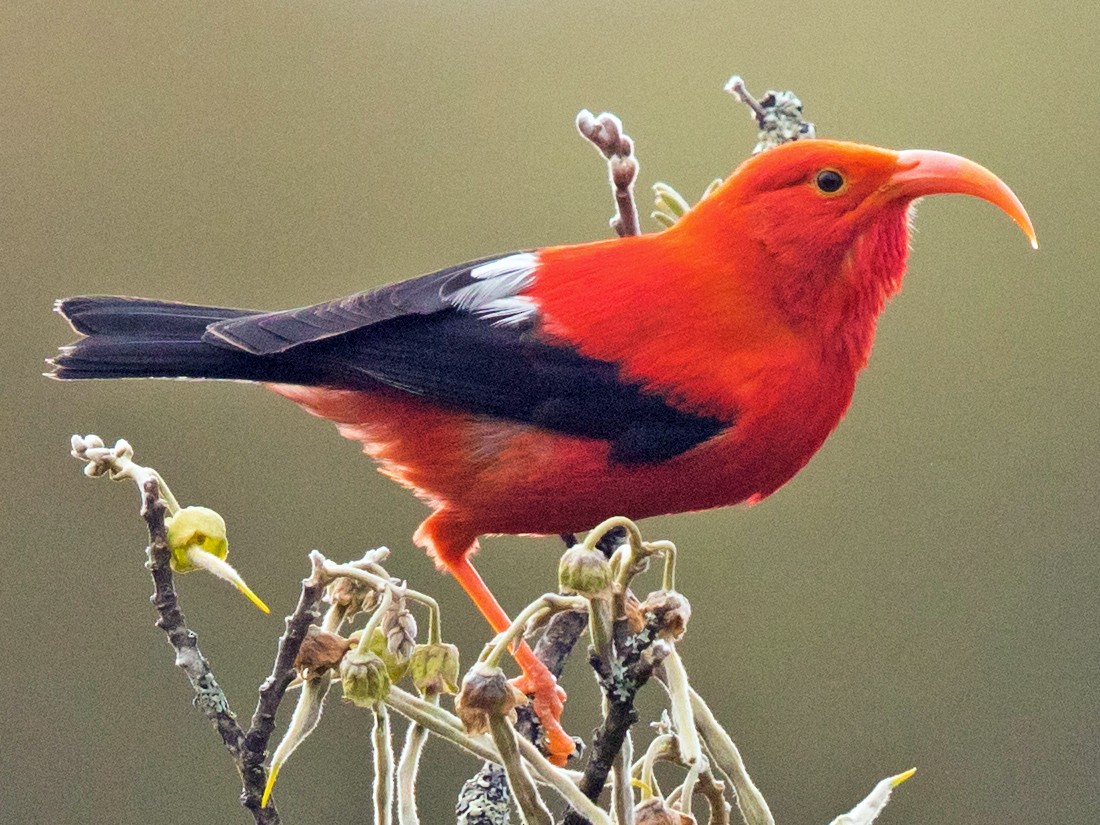 The ‘I’iwi is a red Hawaiian honeycreeper with bright red plumage and a long curved pink bill. Juveniles are of a mottled green, yellow, and orange plumage. Their long bills most likely evolved to help them extract nectar.

The ‘I’iwi is native to the highly elevated forests (from 4,300 to 6,200 feet) of Kauai and Maui in Hawaii. They are quite active and loud and can often be found in the forest understory and canopy, where they tend to chase away other birds from flowering trees.

The ‘I’iwi consumes mainly nectar, such as that from the native Lobelia and mint flowers, and the occasional arthropod. The increase in non-native flowers may explain the increase in some local populations. 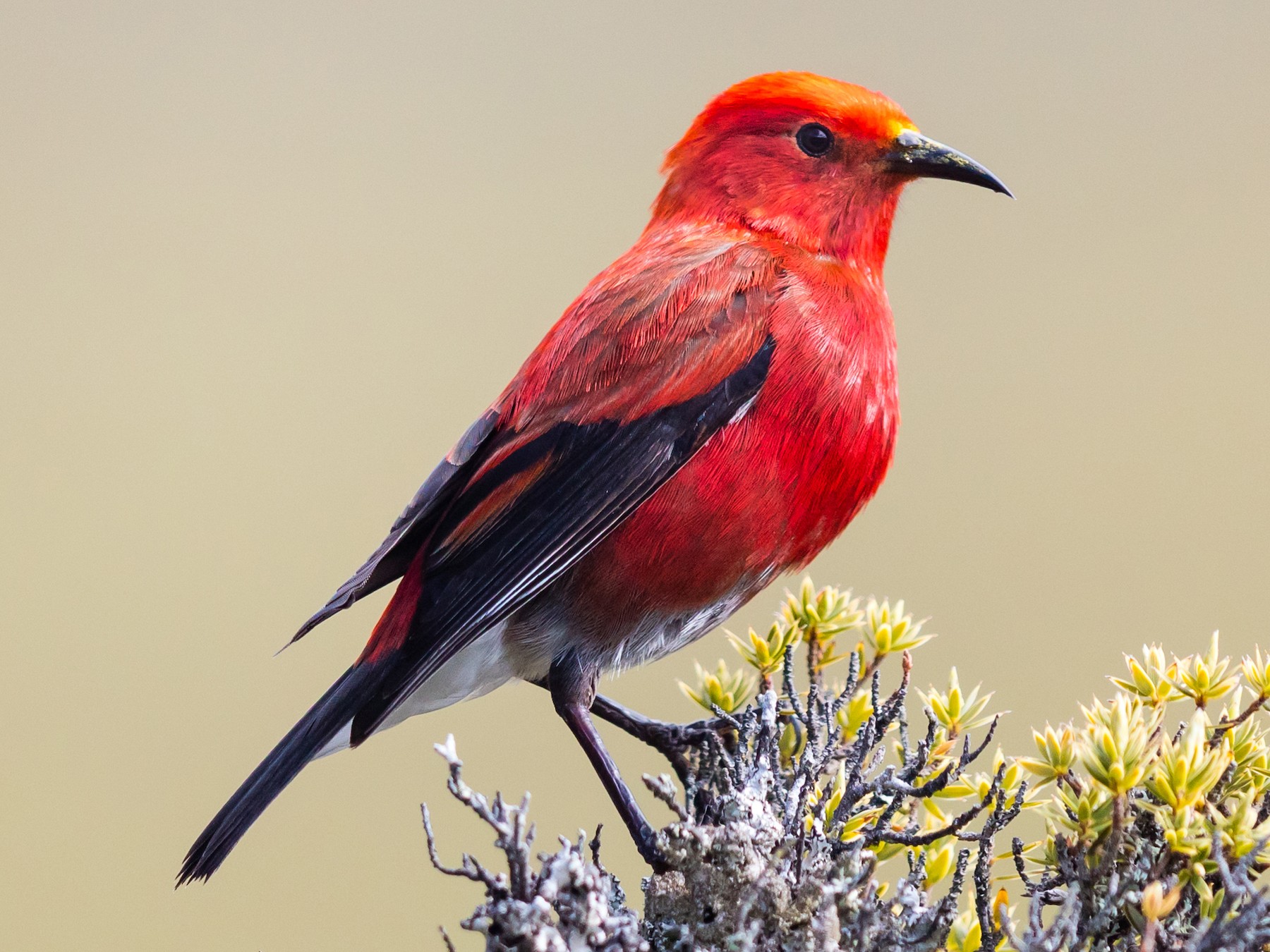 The apapane is another Hawaiian honeycreeper consisting of dark red plumage throughout, a black bill (somewhat shorter than that of the ‘I’iwi), and white areas under the tail, which is often held cocked up. Juveniles are of brown plumage.

Typical habitats for the apapane include highly elevated (typically between 1,000 to 3,000 feet) wet, tropical evergreen, and mesic forests. In lower areas, they typically stay high up in the forest canopy. They often gather around and in flowering trees.

The common diet of the apapane includes nectar of the native ‘ohi’a flowers (they are important pollinators of the flower), and some insects and spiders. 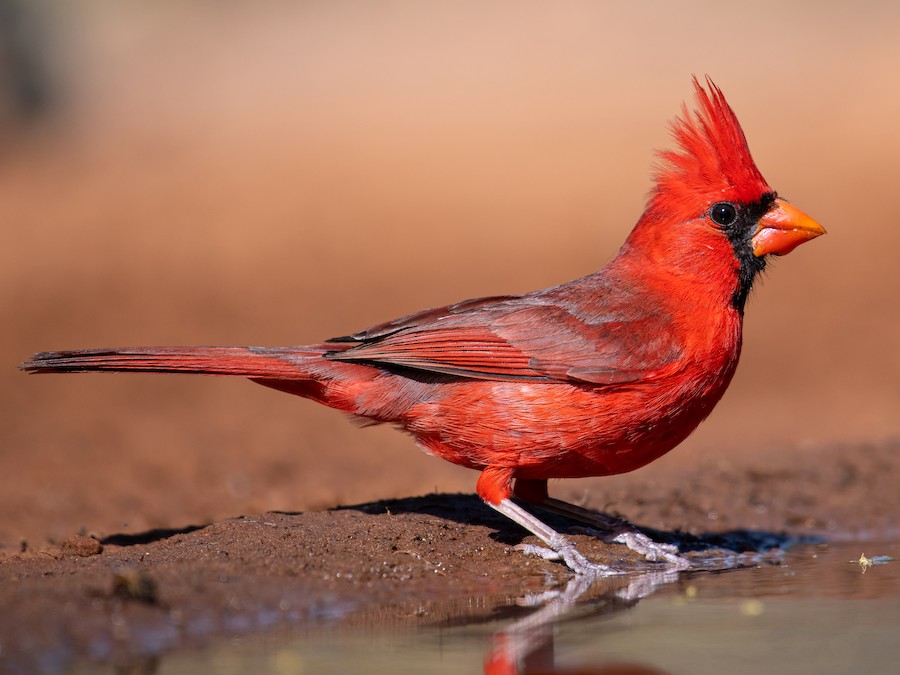 The northern cardinal is a common cardinal consisting of a bright red crest, a large red bill, and a long red tail that makes this bird easily distinguishable even from a distance. Males are completely red throughout with a black face, while females are brown overall with red wings and tails.

Common habitats for the northern cardinal include woodland edges, thickets, suburban gardens, towns, and desert washes. They can generally be found in any brushy or semi-open habitats where there are bushes for nesting. They are also frequent visitors of bird feeders.

The northern cardinal’s diet consists mainly of insects, such as beetles, true bugs, grasshoppers, caterpillars, flies, and ants. They also feed on vegetation, such as the seeds of weeds and grasses, waste grain, flowers, as well as other berries and fruits. They may also consume the occasional spiders, centipedes, and snails if they come across them.

The yellow-billed cardinal is a slim bird with a gray back, white chest, white collar, and a brilliant red head. They appear similar to the red-crested cardinal but lack the distinctive crest. Juveniles are similar to adults, except that they’re brown instead of red.

The yellow-billed cardinal prefers waterside habitats, such as marshes, flooded fields, riparian scrub and forests, and wooded lakeshores. They may also be found in urban cities and towns near the water.

The yellow-billed cardinal feeds mainly on seeds, fruit, insects, and some flowers. They may also feed on young shoots, berries, and in areas near people, refuse, and even leftovers given by people. They can often be found foraging on the ground for seeds. 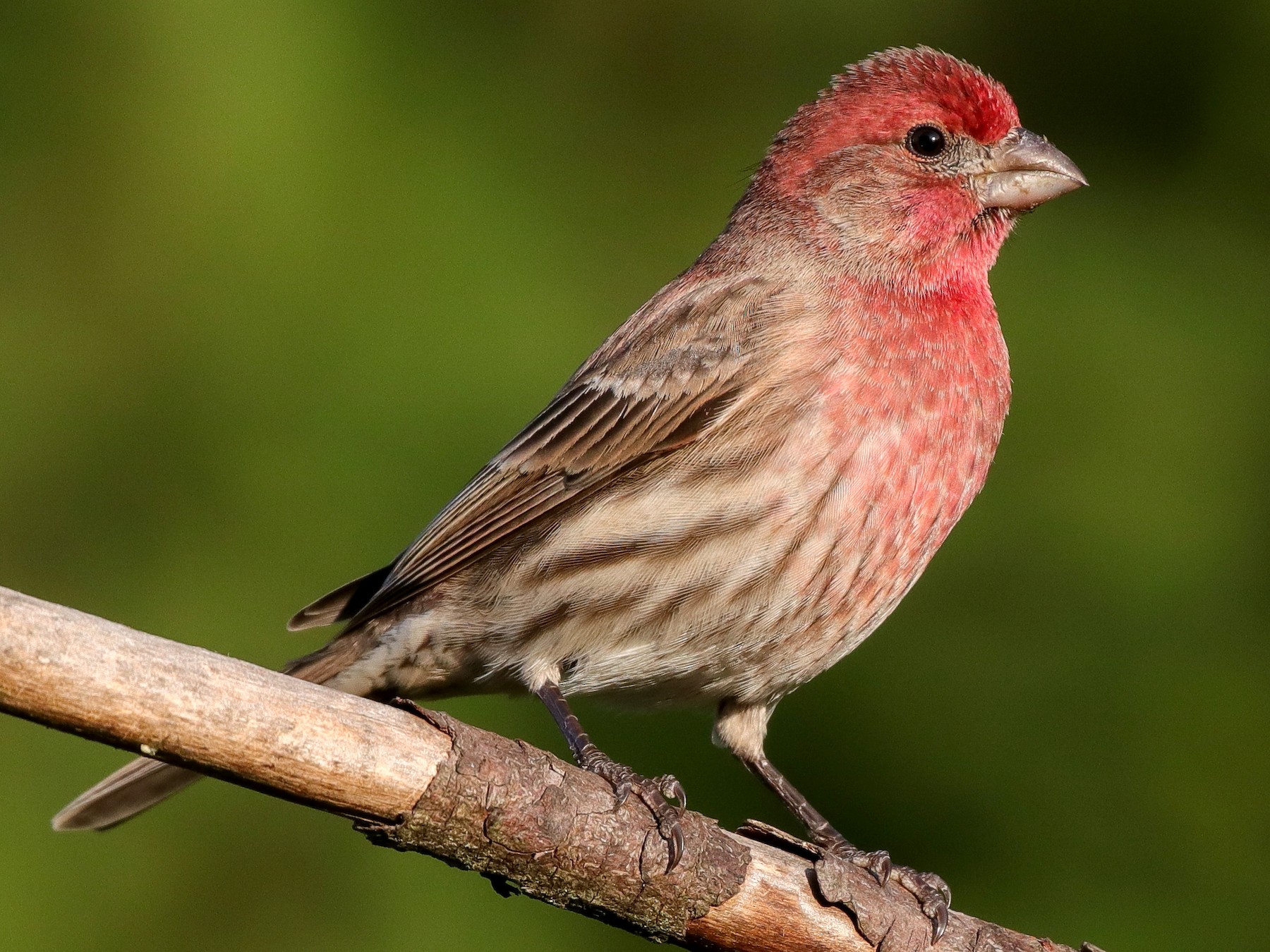 The males have red plumage concentrated mainly on the head and upper chest, contrasting the gray-brown nape, back, and wings. They also have distinct brown streaks along their pale sides, something that is subtler on the females.

The house finch’s diet consists mainly of seeds, buds, and berries. Their diet is comprised almost entirely of vegetable matter, such as weed seeds, flower buds, other flower parts, berries, and small fruits. 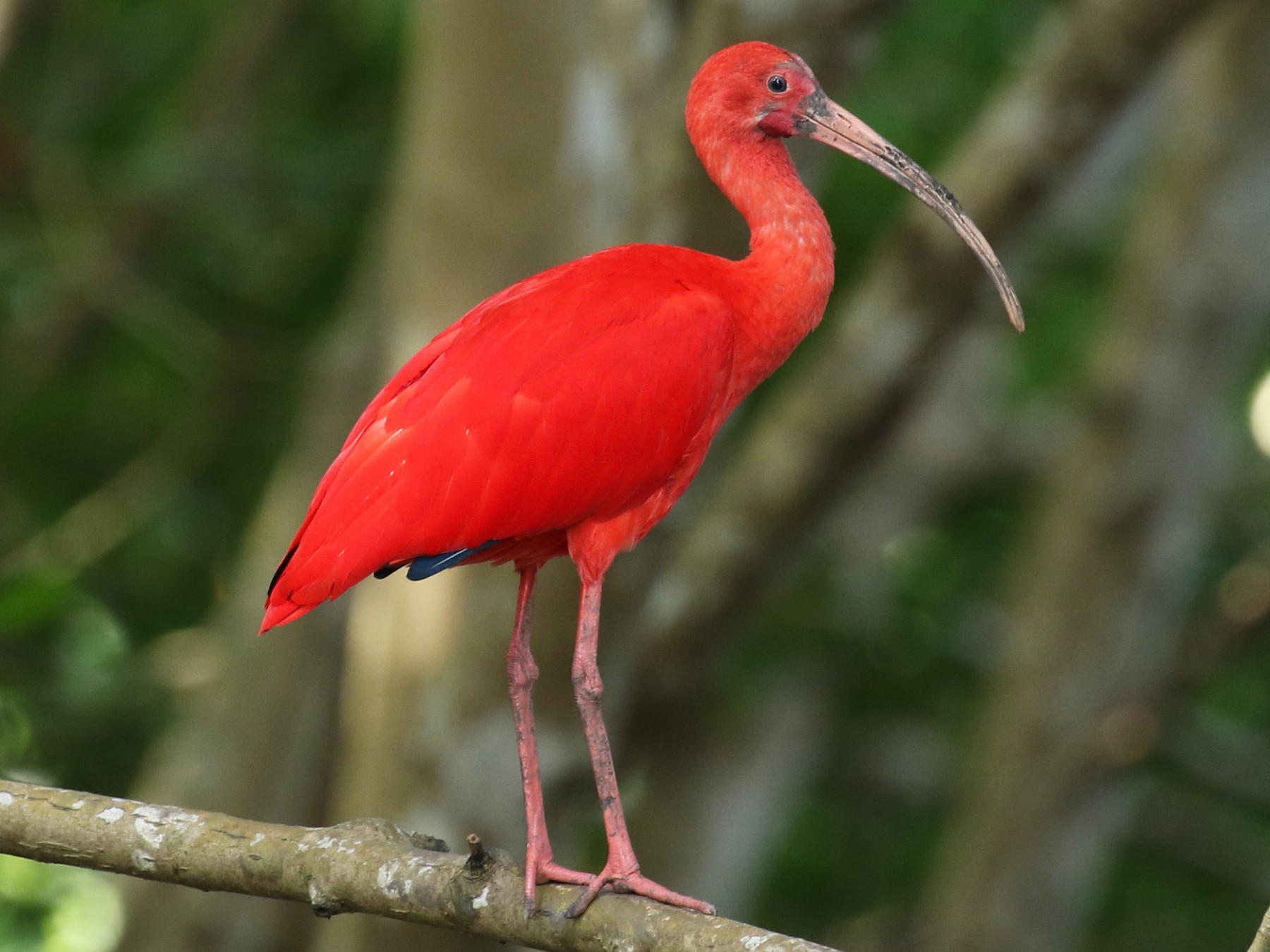 The scarlet ibis is an ibis with bright orange-red plumage throughout, black wingtips, and, for breeding adults, black or pink bills. Juveniles are of dark plumage above, white below, and have pink bills.

The scarlet ibis is primarily found in mangrove forests and their adjacent muddy estuaries. Other aquatic habitats include tidal mudflats, wetlands, and shallow lakes.

Being a carnivore, the scarlet ibis’s diet consists mainly of animals, such as crabs and other crustaceans, small fish, mollusks, amphibians, worms, and insects. They use their long bills to poke into soft mud to forage both on land and in shallow waters. 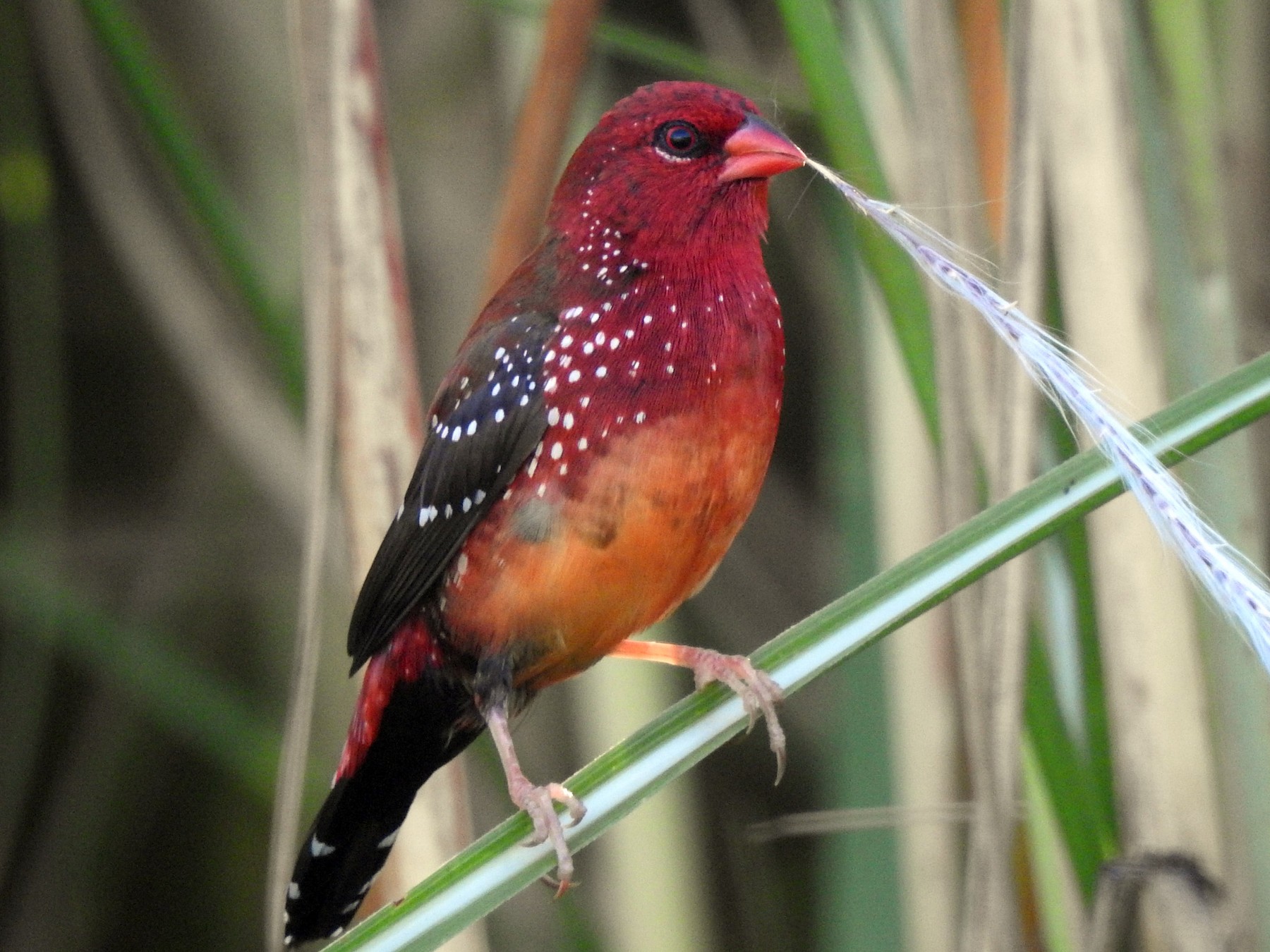 The red avadavat is a small finch that, for males, has dark red plumage overall with white spots covering the body, along with dark wings and a dark tail. Females are of a gray plumage with a rusty-colored rump. Both sexes have a red beak.

The red avadavat is often found in grassy areas near water bodies and human habitation, especially those with wet rice paddies. Other less common habitats include open fields and grasslands.

The red avadavat feeds mainly on grass seeds, but will also consume insects, such as termites, fruit flies, ant pupae, and small mealworms, when they become available.

The redhead duck is a diving duck that, for males, consists of a reddish-brown colored head, yellow eyes, and a gray body. Females have a plain brown plumage overall. Both sexes have relatively round-shaped heads. They can be separated from the canvasback by their head and bill shape, along with the darker gray plumage of the males.

The redhead duck breeds mainly on marshes in prairies or valleys, freshwater ponds, and lakes. They spend their winters on any large body of water. Other habitats include saltwater bays and estuaries.

Redhead ducks eat a mix of vegetation and animals. Vegetation includes mainly the leaves, stems, seeds, and roots of aquatic plants, along with shoalgrass, pondweeds, smartweeds, and waterlilies, among others. Their diet changes to include mainly insects, along with mollusks, and some small fish, during summer. 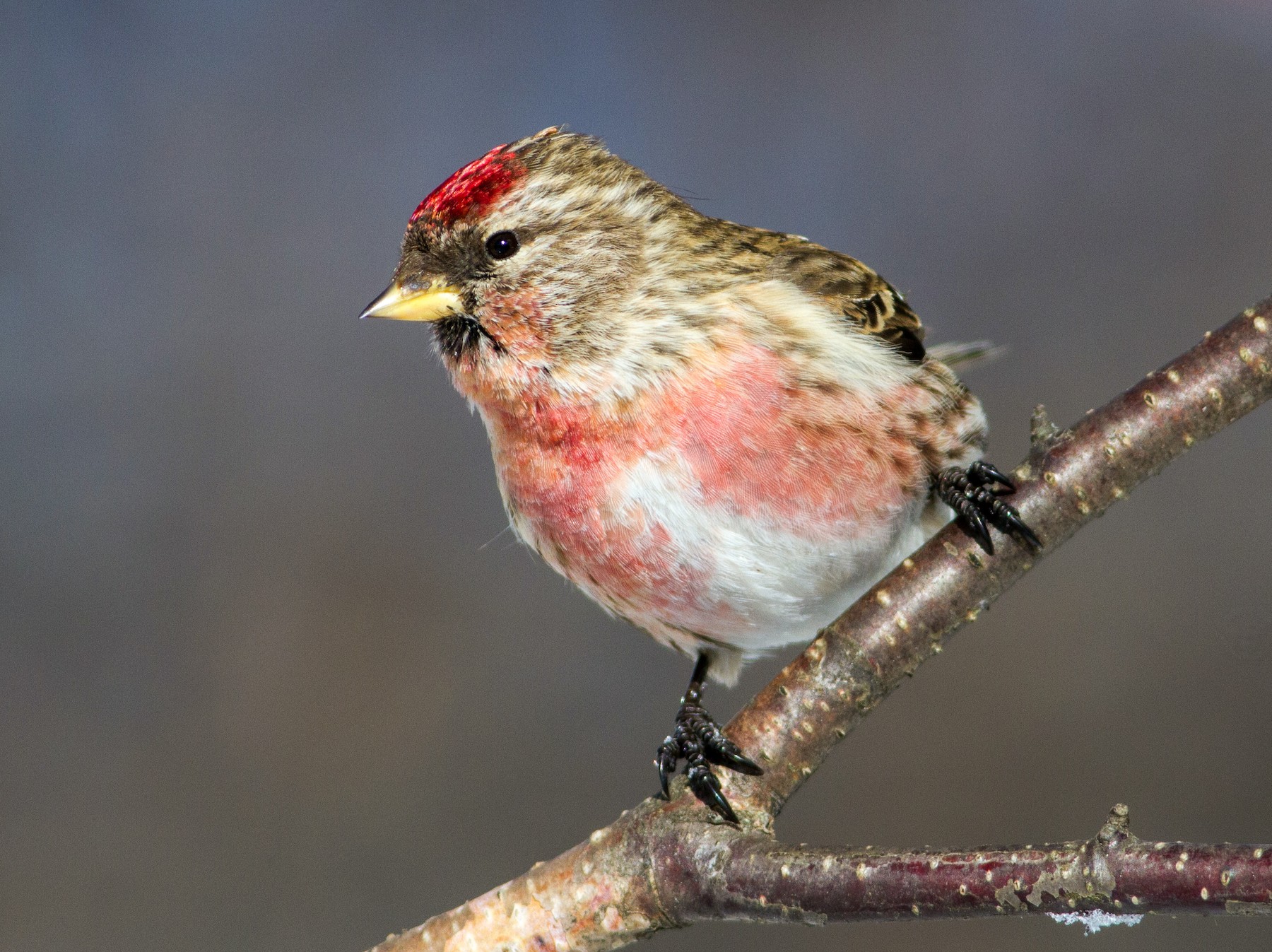 The common redpoll is a small finch with a small yellow bill, a stout body, a long-notched tail, a red cap, a black face, and a black throat. Males may display pink plumage on their breasts.

Typical habitats for the common redpoll include open forests, tundra with willows, coniferous forests with birch and alder thickets, and semi-open country areas such as woodland edges and brushy fields. They are also frequent bird feeder visitors, where they often go for nyjer seed.

The common redpoll consumes mainly seeds and some insects. Seeds and other vegetation include catkins, seeds, and buds of trees such as willows, alders, and birches. They also consume the seeds of conifers and of different weeds and grasses. They consume small insects mainly during the summer. 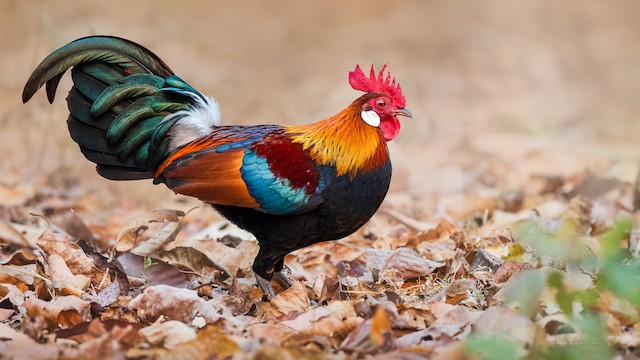 The red junglefowl is a chicken that is relatively smaller than its descendants. The males display a variety of colors in their feathers ranging from red, orange, and gold, to grey, white and green. They often have iridescent green feathers on the tail. Females mainly consist of the same coloration, but a duller tone and are less contrasting.

Typical habitats of the red junglefowl include the woodlands and scrubby habitats in southeast Asia. Other habitats include rainforests and areas with dry brush or trees with small groves.

The diet of the red junglefowl includes a huge variety of vegetation and insects. They consume seeds from over 30 species of plants, a large variety of grasses, bamboo shoots, leaves, and flower pedals. Living prey includes insects, spiders, snails, caterpillars, worms, lizards, and termites.

Despite Hawaii being only a few islands on the Pacific Ocean, it has several strikingly beautiful bird species, some of which are endemic to the region. Luckily, several of these native birds are very bright in color, so as long as you bring along a decent pair of binoculars with you, spotting them in Hawaii should be no problem at all.