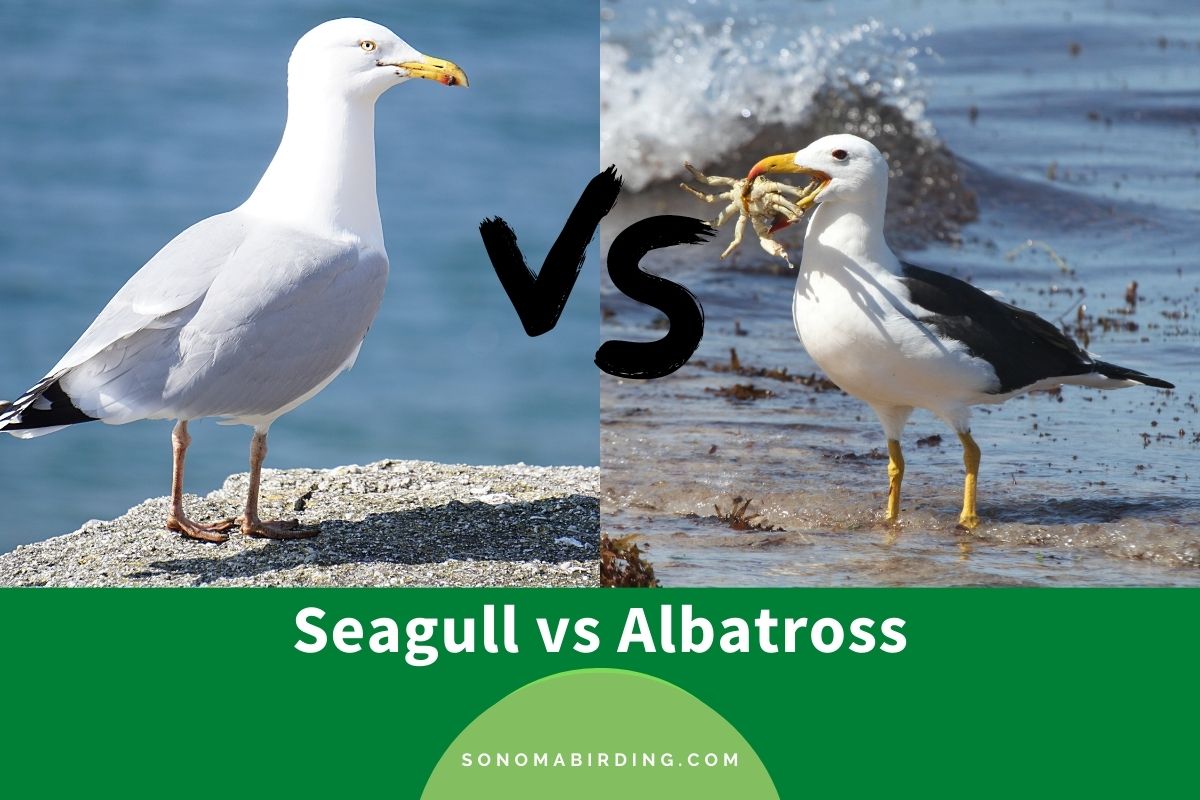 There are hundreds and thousands of different birds in the avian world, and it is not uncommon for people to get confused between any two of them.

In fact, even if the body color and average size of two bird species are similar, we mostly assume them to be of the same species. Seagulls and albatrosses are one such pair of birds.

Are you one of those people who are always confused between the species of similar-looking birds? If yes, then don’t worry; you’ve come to the right place.

Stay with us till the end of this article, and we will tell you everything you need to know about the differences between seagulls and albatrosses.

Seagulls and albatrosses: at a glance

Now, before we proceed to talk about the differences between these two birds, let us take a step back and start from the beginning.

As we have already mentioned before, both the seagulls and albatrosses are seabirds. But what are seabirds?

Well, any bird that makes its living primarily from the ocean, beyond the intertidal or surf zone, is called a seabird. In other words, all bird species that frequent the sea or the coast are counted under the category of seabirds.

As you might have imagined, there are hundreds of different seabird species. And while almost all such birds share a resemblance, there are always some features that set them apart from others, making it easy for us to identify them.

Coming back to seagulls and albatrosses, the following table consists of some basic differences between these birds. Take a look:

Before moving on to the major differences between seagulls and albatrosses, let us first discuss how these birds were named. Like all other birds, these two also have an interesting taxonomy.

How are seagulls named?

Various members of the gull species are commonly referred to as “seagulls.” However, “seagull” is a layman’s (or an amateur’s) term and is not widely used or accepted by most ornithologists and biologists.

This name is usually used informally to refer to a common local species or all gulls in general and therefore has no taxonomical meaning whatsoever.

In fact, in common usage, the term “seagull” is sometimes also used to refer to gull-like seabirds that are not necessary gulls.

For example, fulmars, terns, skuas, and even albatrosses, are sometimes referred to as seagulls by many people.

How are albatrosses named?

Until recently, albatrosses were called “Gooney birds” or “Goonie birds,” especially those in the North Pacific.

In the southern hemisphere, these birds are referred to as “mollymawk,” which came from the word “malle-mugger,” an old Dutch term.

The name “Diomedea” was given to the albatrosses by the Swedish botanist, physicist, and zoologist Carl Linnaeus. It was derived from the story about the Greek warrior Diomedes becoming a bird.

The most obvious way to distinguish between any two species of birds is by their appearances; the seagulls and albatross are no exception to it.

In this section, we will be discussing the physical traits of a seagull. However, the first thing you should know about seagulls is that they are correctly called “gulls.”

People started calling them “seagulls” since these birds were mostly spotted near the coasts. We will be discussing more on this topic later in this article.

When compared to the large body size of the albatross, seagulls are relatively average-sized. Their bodies are uniform in shape, with a heavy body, long wings (although not as long as an albatross), and moderately long legs.

The tails of almost all the seagull species are rounded, except for three: the Sabine’s Gull and the Swallow-tailed Gull, which have forked tails, and the Ross’s Gull, which has a wedge-shaped tail.

When compared to other similar seabirds, seagulls have somewhat long legs, with fully webbed feet, making them adept for walking for land as well.

Their bills are usually heavy and slightly hooked, with the larger species having stouter bills than the smaller ones. The bill coloration ranges from yellow to orange, with a red spot for the larger, white-headed species and red, dark red, and black for the smaller species.

The general coloration pattern in an adult gull is a white body with a darker mantle, which ranges from pale grey to black.

Some gull species have a single body color. The Ivory Gull, for example, has a completely white body, while the Lava Gull and the Hermann gull have partly or fully grey bodies.

Now, before we dive any further into the differences between seagulls and albatrosses, let us first talk about what both of them look like.

As we have already mentioned before, albatrosses are big-bodied birds. Their body coloration varies from white, black, and grey, while some species even have a single body color.

The Southern Royal Albatross, for instance, is almost completely white. Their long, orange or yellow beaks are hooked at the end and contain many horned plates. These beaks also have tubes on the sides that help the birds measure airspeed in flight.

However, the most magnificent physical characteristic is the sheer size of their wingspan.

In fact, judging by the size of their wings, the great albatross (the Wandering Albatross in particular) is the largest living group of birds, with a wingspan of 11 feet (132 inches).

Even the smaller albatross species have a wingspan of about 6.5 feet, which is still longer than most other seabirds.

The wings of the albatross are stiff and arched. You might find that strange, considering how long these wings are, but they have a very logical reason for being so.

Albatrosses glide on the ocean winds for long periods instead of flapping their wings, with minimal body movement.

It is a necessary adaptation for these birds since they have a lot of body weight to carry around. Of course, this means that an albatross cannot fly very well at all in the absence of wind.

Now that we have a thorough idea of how seagulls and albatrosses look, let’s discuss the major appearance differences between them:

When it comes to their diet, seagulls and albatrosses are different since the former are omnivores, while the latter are exclusively carnivores. In this section, we’ll take a closer look into the diet of these birds.

What do seagulls eat?

When it comes to the diet of seagulls, you can rest assured because these birds eat almost anything that humans eat. In fact, research has shown that seagulls are more inclined to eat what they see humans eating.

Even though they are mainly scavengers, seagulls are very skilled at hunting and catching their prey.

Due to their size and weight, these birds are not well suited for deep diving or hunting large fish, which is why they usually go after smaller fish and the fry (younger ones) of larger species.

Needless to say, these birds are fully comfortable with eating the fish they didn’t catch themselves. They are often spotted around docks and following fishing boats, looking for an easy meal or two.

Below, we have enlisted the names of the fish that seagulls go after the most:

What do albatrosses eat?

Unlike seagulls, albatrosses are not a fan of the food that humans eat. They are mostly seen living off of fish and mollusks, but they often make an exception of carrion and other zooplankton.

However, the importance of each food source is different for the varying species. Some species are partial to the squids, like the Laysan albatross found in Hawaii, while the others prefer more fish in their diet, like the Black-Footed albatross.

Albatrosses are also seen taking the help of other fish to eat more often than not.

For example, they eat the squids that have died after mating or those that are vomited out by the squid-eating whales (sperm whales or pilot whales). Also, sometimes the Waved albatross is seen stealing food from other birds.

Until recently, people believed that albatrosses only feasted on the fish found at the sea’s surface. It included dead squids pushed to the surface by the waves, other fish, or death.

However, it was proven wrong not long ago, since these birds have an average diving depth of about 5 meters and can dive as deep as 12.5 meters.

Because the seagulls spend more time in their nests than the albatrosses, these seabirds seem to put more thought and effort into their nesting preferences.

Most seagull species prefer to nest in large colonies; although sea cliffs or beaches are their primary choices, you can also find them nesting on sand dunes. Some species have even adapted to rooftop nesting.

The nests of seagulls are very well-constructed; they have a cup-like structure and are commonly made of twigs and grasses.

On the other hand, the albatrosses nest on remote islands. These seabirds are more of ground nesters and would use anything found at their disposal while building their nests.

Some of the common building materials used by them are soil, peat, shrubs, and even penguin feathers.

The Waved Albatross is an albatross species that do not build nests at all. These birds prefer to move their egg with them, which often results in the loss of the egg.

Differences in mating and reproduction

As far as mating is concerned, seagulls and albatross have some similarities. Both seabirds are colonial breeders and stay monogamous to their partners for life.

While most seagull species breed annually, the albatrosses often breed once in two years, also referred to as “Biennal breeding.”

Seagulls lay about 2-3 eggs at once, but the albatrosses lay only one. Both seabirds protect their eggs fiercely and care for their younger ones for a long time, at times even half a year or more.

The incubation period of the seagull lasts for 20-25 days, while albatrosses incubate their egg roughly three times longer than that (70-80 days).

Both seagulls and albatrosses are seabirds that humans have not domesticated; it is also highly unlikely to happen in the future. Therefore, we lack in-depth knowledge of their nature and personality.

However, during common instances of birdwatching or rare interactions with these birds, it is obvious that despite their smaller size, the seagulls are more violent and aggressive than the albatrosses.

Gulls are highly territorial and protective of their nests and younger ones and will not hesitate to attack (peck, strike, or bite) humans if they feel threatened.

Moreover, they’re also known to steal food from people’s hands on multiple occasions, just as they do with other birds.

On the contrary, the albatrosses are gentle and graceful creatures that rarely behave violently towards humans. Ironically, many fishermen despise these birds for eating all the fish and have even attacked them numerous times.

In this article, we have discussed many major and minor differences between the two seabirds, seagulls and albatrosses. Even though most seabirds look the same, a closer look will reveal all the differences.

We discussed the major differences between the two birds based on their appearances, food preferences, nesting preferences, mating behavior, and personalities.

We have also included a table that differentiates between seagulls and albatrosses based on their genera, length, height, wingspan, population status, and more.