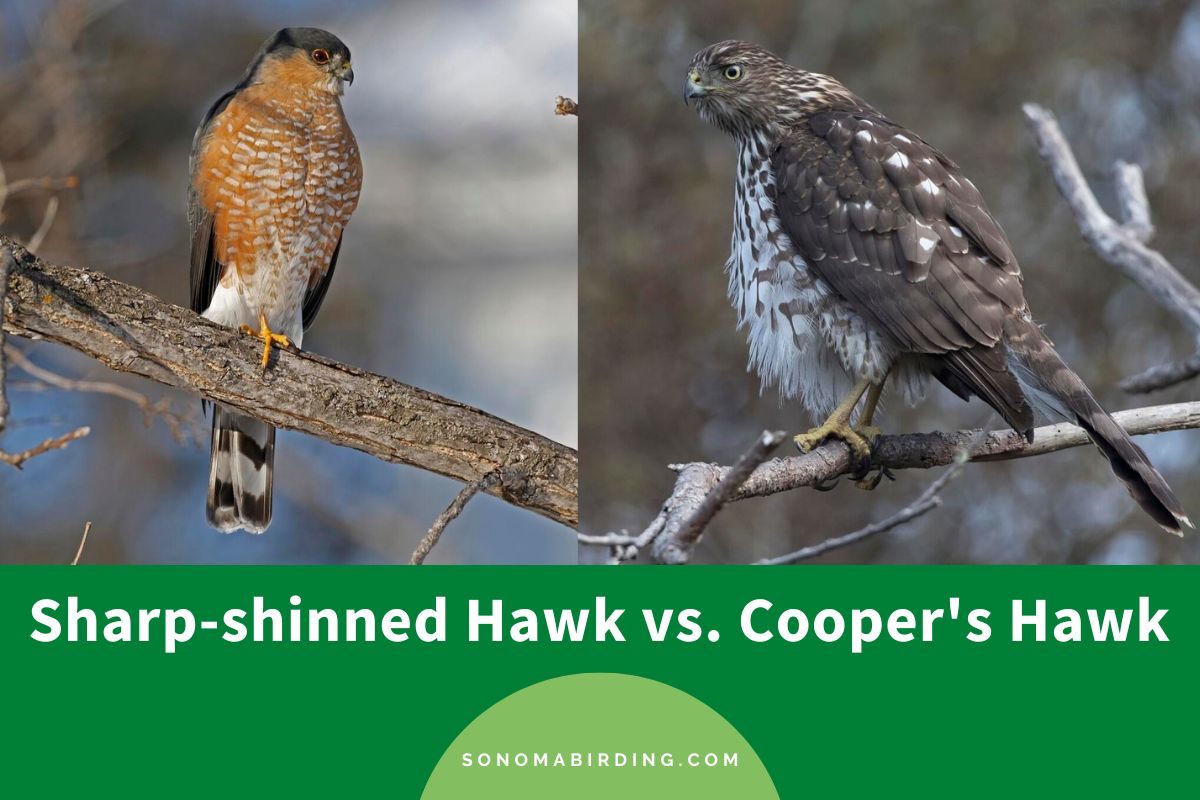 As many of the birders might already know, the United States is home to over twenty different hawk species, out of which these six have abundant populations and are commonly spotted: Red-tailed, Red-shouldered, Broad-winged, Ferruginous Sharp-shinned, and Cooper’s Hawks.

But if we were to ask you which of these hawks you often mistake for the other, what would you say? In a survey we conducted on this question, we noticed most birders taking only these two names: Sharp-shinned and Cooper’s Hawks.

And we can understand. With their reddish irises, strongly barred chests, and grey backs, the Cooper’s and Sharp-shinned Hawks are indeed quite similar to one another. At a distant glance, one can easily confuse the two. So, how will you tell them apart?

In today’s article, we’ll dig deeper into the appearances and personalities of these two North American hawks and examine the features and attributes that set them apart from each other. Let’s get started!

Sharp-shinned Hawk vs. Cooper’s Hawk: At a glance

Before we delve deeper into helping you distinguish between Sharp-shinned and Cooper’s Hawks, let’s first address the similarities between them.

As their names themselves indicate, both these birds are hawks: medium-sized, long-tailed raptors that primarily inhabit woodlands and have a wider population in the world. The two also belong to the same genus (Accipiter), which homes 51 raptor species of hawks, goshawks, and sparrowhawks.

Now, let’s move on to scan the table given below. It will give you an idea of the basic similarities and differences between these raptors before we explore each one elaborately:

Are you ready to learn about the differences between these hawks in detail now? Let’s begin with appearances first!

Because the primary ground of similarities, and, therefore, confusion, between both Sharp-shinned and Cooper’s Hawks is their appearance, we’ll focus on it first and foremost. Below, we’ll discuss six physical features of both these hawks and the differences between them:

Since we’ve already established that Cooper’s Hawks are overall much larger than Sharp-shinned Hawks in size, it’s obvious that their heads would also be larger than the latter; this is the first difference between the two.

Secondly, while the Sharp-shinned Hawks have a rounded head forming a smooth curve, Cooper’s Hawks’ heads are comparatively edgy and appear somewhat squarish. The crest-like feathers at the back of their heads further contribute to it.

Lastly, the color of Sharp-shinned Hawks’ back and head are uniformly bluish-grey. On the other hand, among the Cooper’s Hawks, the heads are darker than the lower body, lending them a dark-capped look.

Coming down to their necks, you’ll notice that the Sharp-shinned Hawks have very short necks, which makes them appear nearly neckless. On the other hand, the Cooper’s Hawks are comparatively long-necked, which helps with their head movements.

Additionally, the feathers of Cooper’s Hawks’ hindneck are almost pale white, giving their dark heads a contrast, while no differentiation of color is noticed in the Sharp-shinned Hawks’ back.

Now that we’ve got the heads and necks covered, let’s move lower to their upper and underparts:

Upperparts
Both Sharp-shinned and Cooper’s Hawks have a blue-grey (or livid) colored back, including their wings. From a distance, they appear almost identical, but if you take a closer look, you’ll notice how the Sharp-shinned Hawk’s back has a dull brownish wash which Cooper’s Hawks lack.

For this reason, the former generally appears browner (and at times even duller) in comparison to the latter.

Underparts
Both these hawks have white undersides with rufous streaks scattered over them. However, while the lower belly of Sharp-shinned Hawks displays thicker streaks, that of the Cooper’s Hawks is relatively unmarked and appears much whiter in comparison.

It is common knowledge that all hawks in the Accipiter genus are long-legged and long-tailed. But do you know why the Sharp-shinned Hawks have been named so? It is because their legs are surprisingly slender, making them appear even longer than they are.

As you might have gathered in the table above itself, the wingspan of Sharp-shinned Hawks is shorter than that of the Cooper’s Hawks. This makes sense as the latter is overall larger as well.

Another important distinction between the wings of these two hawks is in their shape. The Sharp-shinned Hawks’ wings are placed forward in their body and have a rounded end, save for a few feathers that are separated at the tip and appear more like independent fingers.

On the other hand, the wings of the Cooper’s Hawks are straight, placed parallel to their flanks, and have a pointed edge.

Lastly, we come to the tail of these hawks. These can easily be distinguished, for the tail of the smaller Cooper’s Hawks is shorter and has a rounded edge. On the other hand, a Sharp-shinned hawk’s tail is longer and squared at the end.

When it comes to vocalization, we must keep in mind that hawks are not songbirds but raptors. And just like raptors are not highly vocal birds, this is true for both Sharp-shinned and Cooper’s Hawks.

The only time of the year when these hawks are known to produce calls is during their mating season. During these months, they produce calls to first attract a mate and then communicate with them.

Both the hawks have shrill, high-pitched calls, but they do sound slightly different. The calls of Sharp-shinned Hawks are described as kik-kik-kik, while that of the Cooper’s Hawks sound like cak-cak-cak.

Differences in hunting style and diet

When it comes to their diet, one basic rule applies to both Sharp-shinned and Cooper’s Hawks. They’re both raptors, which means they always hunt and kill their food. However, when you dig deeper into their hunting style, you’ll be able to explore their differences.

The Sharp-shinned Hawks are flying hunters; after they’ve selected prey in flight, they wait for them to get inside a wooded landscape (a forest of any kind) to gain an element of surprise. Once the prey has taken shelter among the trees, Sharp-shinned Hawks take a deep plunge dive, flying through the thickets with ease until they’re right upon their prey.

Unlike Sharp-shinned Hawks, the Cooper’s Hawks don’t have the tendency to launch attacks mid-flight. After finding their target, they don’t plan on following it inside the woods but instead fly around in circles to find a suitable tree nearby to perch on conspicuously.

Then, when the bird flies around the tree, unaware of the predator lying in wait, these ambush predators take a swift flight, seizing the birds and killing them almost instantly.

Both these hawks excel at hunting birds and are rarely spotted preying on rodents or small mammals. However, due to the difference in their size, the range of their prey differs.

Sharp-shinned Hawks prey on small songbirds, such as sparrows, tits, finches, nuthatches, wood warblers, thrushes, wrens, and icterids. On the other hand, the prey list of Cooper’s Hawks includes medium-sized birds like American Robins, blackbirds, and even grouses!

Identifying a raptor in flight is no easy task. These birds of prey are exceptional fliers and can dart or dive with ease, especially when in pursuit of prey, which is pretty common. It is only when they’re gliding or soaring that you can notice the difference in their flight patterns.

While soaring, the wings of the Sharp-shinned Hawks are pushed forward at their wrist, placing them parallel to their heads. On the other hand, the Cooper’s Hawks hold their wings straight, which makes their head appear more prominent.

In terms of wing beats, you’ll notice how Sharp-shinned Hawks flap their wings more frequently and in an erratic manner, while the Cooper’s Hawks have slower, smoother wingbeats.

Sharp-shinned Hawk vs. Cooper’s Hawk: Who would win in a fight?

Being members of the raptor family, both Sharp-shinned and Cooper’s Hawks have been blessed with sharp bills and powerful talons designed specifically to attack and kill other birds. In other words, if they’re ever opposing another bird in a fight, they’re highly likely to win.

But what would happen when these hawks fight with each other? Well, although such a thing isn’t common in real life, if it did, we’d bet on Cooper’s Hawks to win. This is because, despite the similar features and attributes these birds possess, the Cooper’s Hawks have the advantage of size that is bound to give them the winning edge.

However, if Cooper’s Hawk is old or injured, the chances of Sharp-shinned Hawks winning can increase substantially.

Vulture vs. Hawk: What’s the Difference?

How To Scare Away Hawks? (10 Effective Ways)