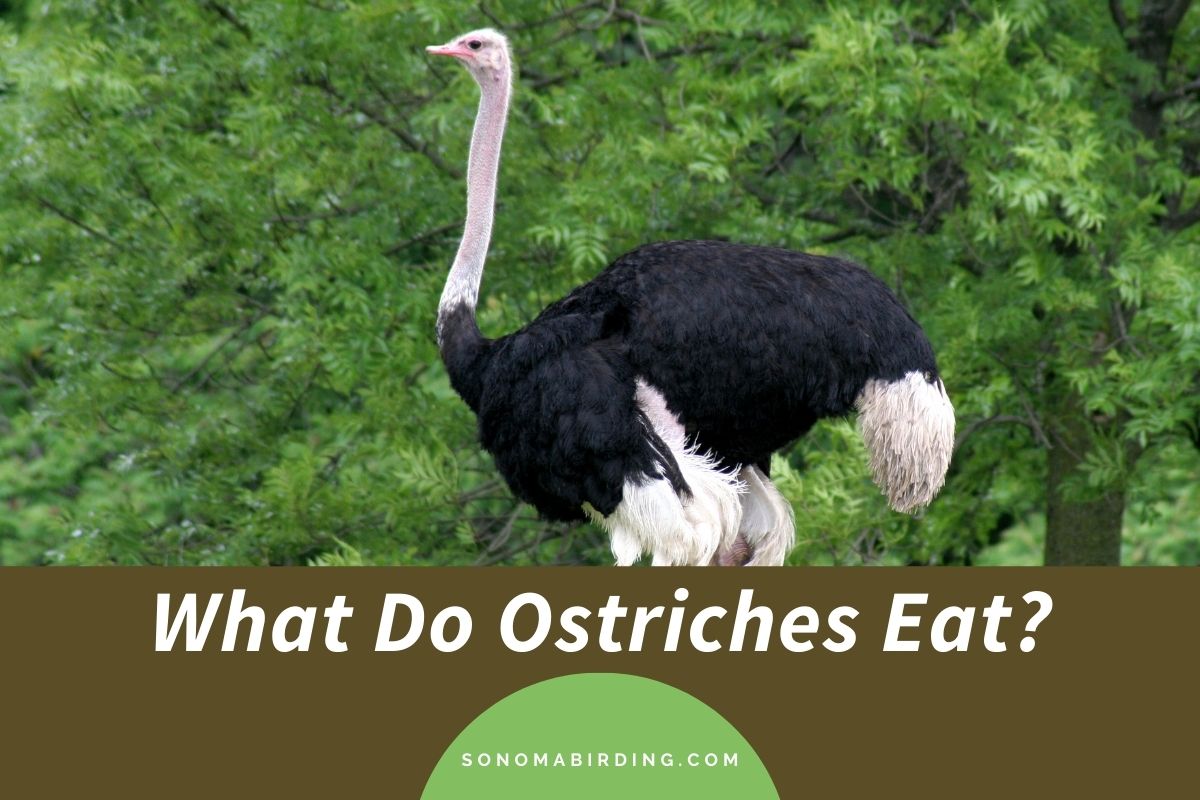 Popular for being the world’s largest flightless birds, the ostriches are a family of African birds, only two of which are extant today. While these birds cannot fly, they’re skilled runners with long, powerful legs. Considering the size of these desert-dwelling birds, it’s obvious that they’d need plenty of food to survive. But have you ever wondered about what they eat?

Ostriches have an omnivorous diet consisting of almost all parts of plants, including the roots, flowers, fruits, buds, seeds, and leaves, along with insects, rodents, amphibians, and other small mammals. In captivity, 90% of their diet should ideally come from commercial feeds, along with occasional fruits and vegetables as treats.

Due to the habitat preference of the ostriches, they cannot afford to be picky eaters and will generally eat anything they can find. In this article, we will take a deeper look at the diet of these birds and learn how they can survive in arid areas.

What do ostriches eat in the wild? 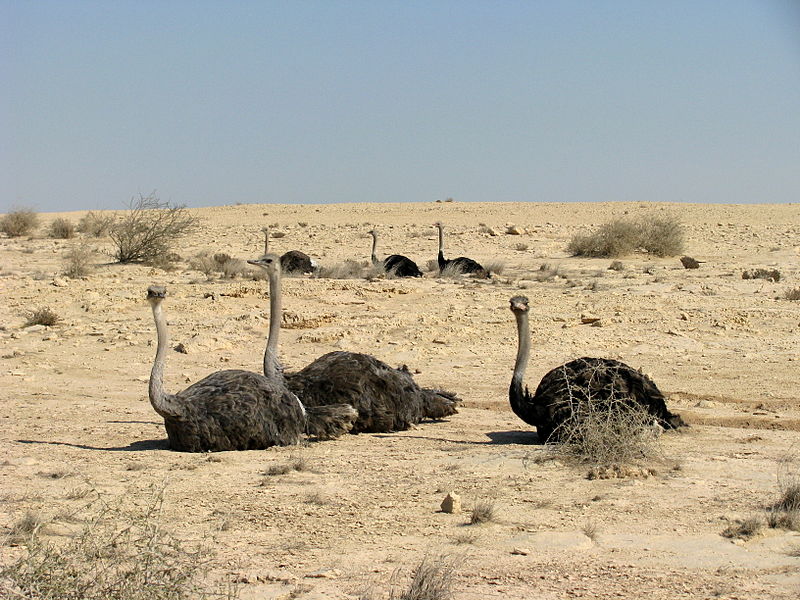 As we just discussed, ostriches live in an environment where food is not merely a commodity but a luxury. The deserts and savannahs of Africa, home to these large birds, have scarce vegetation and wildlife.

As you can imagine, the availability of plants and animals in these regions has a direct impact on the diet of ostriches.

They might be omnivorous birds, but a majority of their diet comes from plants, with only 5% of it consisting of small mammals and insects.

When it comes to plants, the ostriches have very little reservations about taste and will readily eat the roots, leaves, seeds, nuts, flowers, bulbs, berries, and fruits.

In many areas, they primarily survive by feeding on green grasses, wild shrubs, and bushes.

One of the lesser-known facts about the ostriches is that while they might appear scary, these birds are not instinctive predators with a tendency to go after smaller animals.

They will either eat the insects or animals they happen to find on their way or their remains left behind by another carnivore.

Some of the animals and insects they commonly eat in the wild include moths, locusts, grasshoppers, crickets, frogs, lizards, mice, and snakes.

What do the farm-raised ostriches eat? 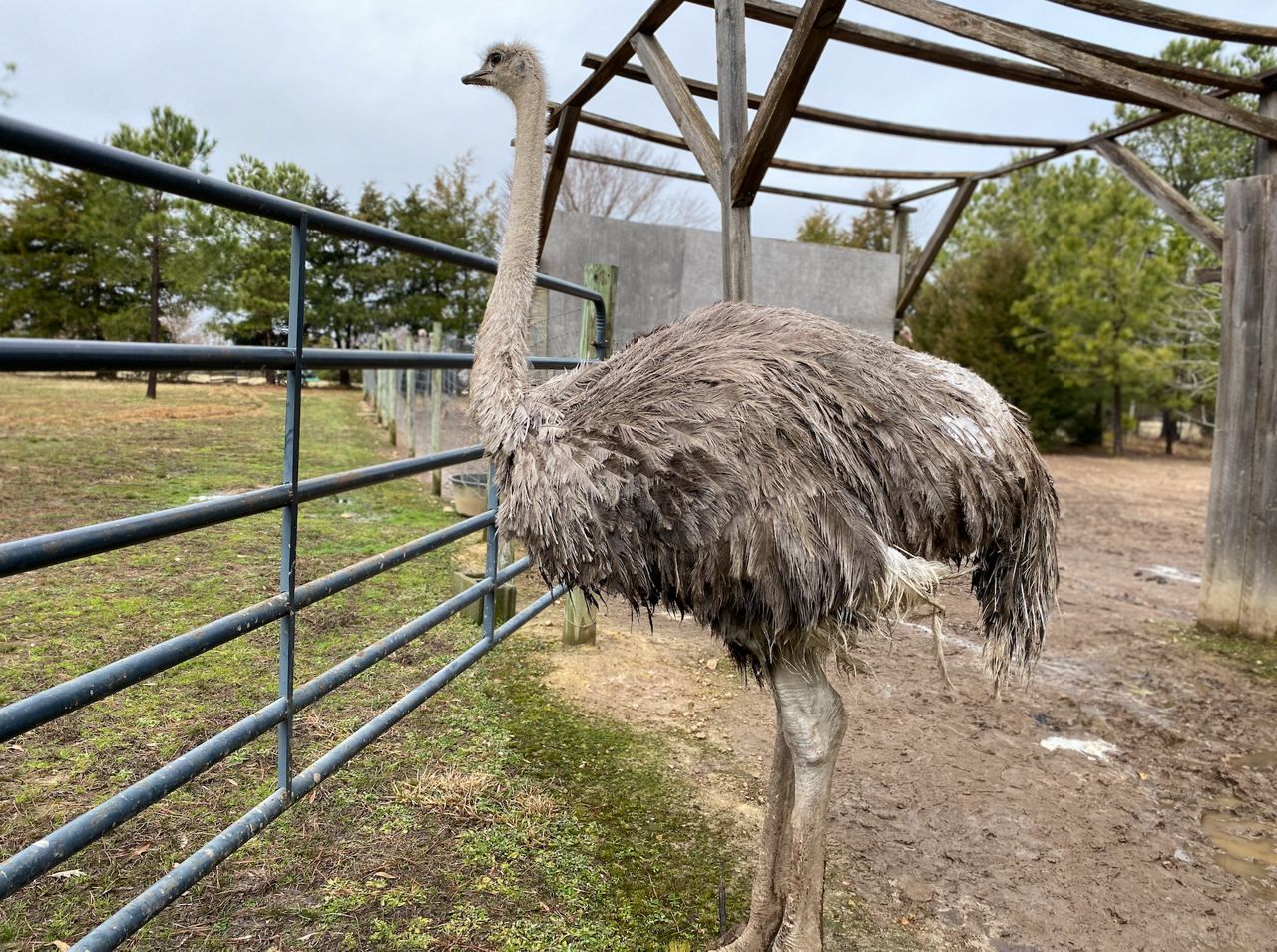 Looking at ostriches, could you ever imagine them living in captivity? Well, as we mentioned earlier, these birds might look large, but they’re quite harmless. While ostriches cannot be kept as pets, they are raised on farms for their exotic meat and a number of other commercial purposes, such as their leather, moisturizing oils, and eggshells.

However, raising ostriches is an expensive affair. These birds need to eat about 3 pounds of food every day in order to remain healthy.

In captivity, the diet of ostriches should ideally consist of their commercial feeds that have been manufactured, keeping in mind the nutritional requirement of these birds.

Do ostriches eat rocks and pebbles? Why?

Did you spot an ostrich eating rocks and stones in the zoo and think you were mistaken? Well, you aren’t.
Ostriches, along with other birds and animals such as crocodiles and sea lions, do consume small rocks, stones, and pebbles, which are called “gastroliths.” But they aren’t really eating these stones but simply swallowing them.

Wondering why? These gastroliths are stored inside their gizzard, a muscular second stomach that is responsible for grinding down the food they consume into a fine paste before it moves to their intestines. This function is very much similar to that of grit in other, smaller birds.

Because of their large gizzards, the ostriches can even swallow stones as large as 10 centimeters!

Does the diet of ostriches vary in different seasons?

If you’re curious about wildlife, you must be aware of the fact that, much like humans, the diet of many birds and animals also changes according to different seasons. Smaller passerine birds eat insects during summers and switch to fruits and berries in the winters.

Does the diet of ostriches also undergo similar changes due to the changing season? Not particularly. Because these birds live in arid and semi-arid environments, they don’t see significant changes in their vegetation due to changing seasons.

However, if they were to find trees with fruits growing on them in winters or summers, they’d certainly eat them.

It is no secret that arid areas have a water shortage, and the animals and birds that live here have adapted to it. The same is true for the ostriches; these birds are surprisingly good at surviving with little water.

These birds are capable of controlling and regulating their body temperature to a large degree like the camels, due to which they reduce moisture loss by preventing panting.

Additionally, most of their skin is covered with features that prevent the evaporation of moisture from their body. The organs and tissues of these birds can also absorb moisture from the plants they eat.

Lastly, the ostriches can also concentrate their urine to avoid water loss. Therefore, just like the camels, their urine is also dark brown.

All these adaptations help the ostriches forgo water for about two weeks. However, if they have access to sufficient water, they can drink up to 1-2 gallons of it in a day.

The diet of baby ostriches

Do you work on an ostrich farm, or are you planning to open one? In that case, it is essential for you to understand the diet of these birds, particularly of their younger ones, since they’re more fragile and need more care and attention.

The diet of baby ostriches is very different from that of the adults because, in the initial stages of their lives, they have special nutritional requirements to help them grow and develop. Their diet at this point plays a crucial role in their health and weight as adults.

When these babies are hatched out of their eggs, they have enough nutritional fluids from the yolk to keep them nourished for a while. This time period is quite confusing, as some claim it to be 6-8 days, while others believe it to be 12-15 days.

Therefore, you should check about it with your vet before you start feeding them solid food. Most people start feeding them yogurt in the beginning and then slowly switch to the solids. Once these chicks start eating, they should be fed the commercial starter feed (containing 26% crude protein) exclusively for the next three weeks.

Between 3-8 weeks of age, you should feed them the same feed twice a day, with each session being 20 minutes long. Thereafter, they can eat the commercial grower feed until they reach maturity (about three years).

As we come to the end of the article, we’ve already discussed everything you need to know about the diet of ostriches.
But have you ever wondered where these birds rank in the natural food chain of the animal kingdom? Are they at the top of it? Or are they hunted by other predators as well?

Given their size, their speed on the ground, and the strength of their legs, it is safe to say that taking on a healthy adult ostrich is no cakewalk for even the deadliest predators of the world (except humans, of course).

However, there are some carnivores in the wild that have been reported to prey on the ostriches, although with a low success rate. Here’s a list of these predators:

However, when it comes to baby ostriches or ostrich eggs, many birds and animals have a better chance of hunting them. Jackals, mongooses, and several birds of prey are their most common predators.

And finally, we’ve reached the end. Today, we’ve learned in detail about the diet of ostriches, both in the wild and in captivity.

We learned that these large birds have a flexible diet and can eat a variety of plants, insects, rodents, and small mammals. However, a majority of their diet comes from plants.

As a bird living in deserts and savannahs, ostriches have adapted to surviving on lesser water and can go without water for as long as 15 days.

Emu Vs. Ostrich: What’s The Difference?