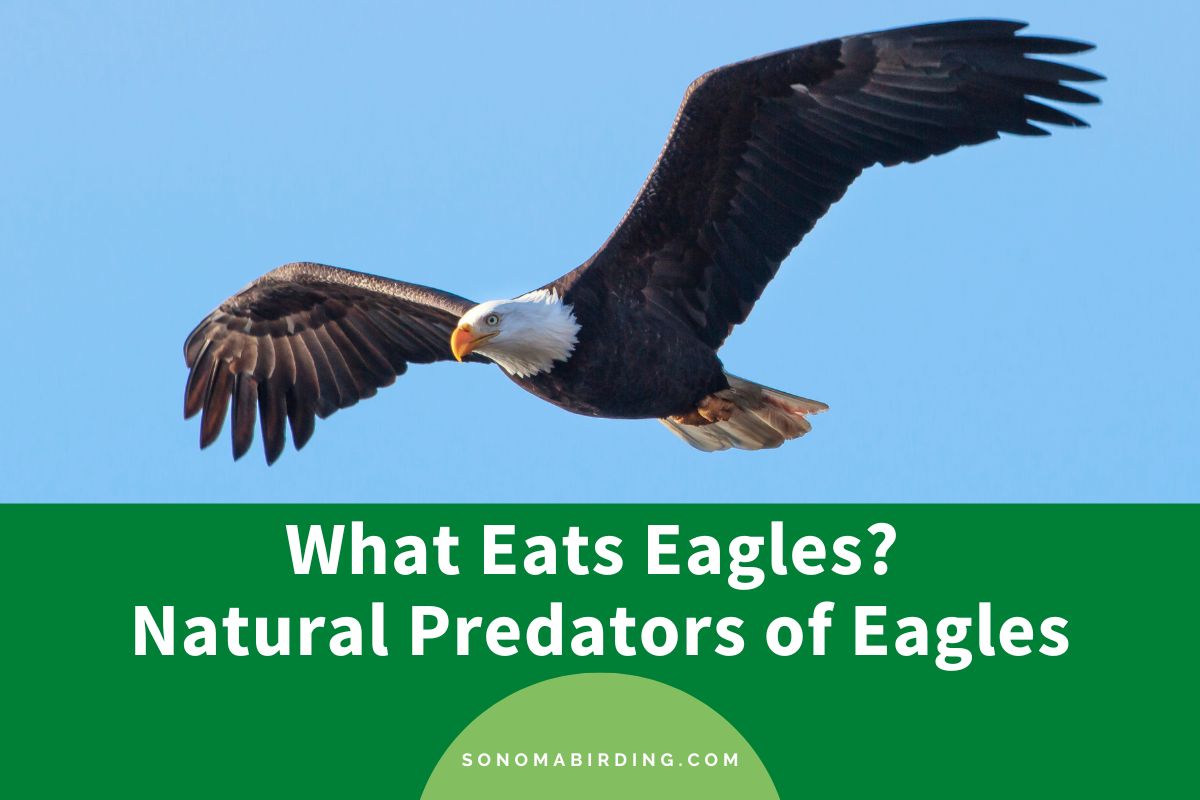 Eagles are iconic birds that are known for their size and strength. They soar through the sky with ease and can spot prey from great distances. But what eats eagles? What natural predators do they have? In this article, we’re going to learn about the place of eagles in the food chain.

So, what eats eagles? Because eagles are one of the apex predators, they have no natural predators in adulthood. However, their eggs and nestlings are vulnerable to several birds as well as raccoons. Lastly, human beings pose the most significant threat to eagles’ survival because of their illegal hunting, contribution to pollution and deforestation, and overuse of pesticides.

If you’ve come here looking for the predators of eagles, your questions will be answered in this article.

Natural predators of adult eagles: do they exist?

How many of you are familiar with the term “apex predator”? Also referred to as “top predators” or “alpha predators,” the apex predators are those animals that are placed at the top of the food chain because they don’t have any natural predators.

Now, what kind of creature wouldn’t have any natural predator? The ones that are strong and formidable enough to take down any other bird or mammal trying to hunt them or compete with them. Does that sound even remotely like the eagles? Yes, absolutely.

Eagles belong to the raptor family, a family of birds that are the most ruthless hunters in the entire avian world. Even among these raptors, eagles surpass the owls, hawks, falcons, and kites both in size and strength as a general rule.

The only raptors larger than eagles are the vultures. However, since they’re scavengers, they cannot possibly match the strength, sharpness, or speed of the eagles. To sum it up, eagles are not only the best of all raptors but the uncrowned kings of the avian kingdom.

Coming back to our initial question: do these birds have any natural predators in the animal kingdom? Well, considering the fact that no bird could compete with them, and no mammal would ever have the opportunity to do so (since eagles rarely dwell on the ground), the answer would be “no.” This makes the eagles an apex predator.

Predators of eagle nestlings and eggs

In the last section, we learned about how deadly eagles can be. However, you cannot expect these birds to be so strong and fast as soon as they hatch from eggs, can you? This would mean that while it might be impossible to prey on a healthy adult eagle, their eggs or nestlings can have predators.

Eagles are aware of the fact their eggs or nestlings could be their weak link, which is why they always protect them most fiercely.

Most of the eagle species, including the Bald and Golden Eagles, are excessively aggressive in their mating season. They always pick the tallest tree in their vicinity to build their nest on and protect the whole territory viciously, not allowing any other bird to enter the area.

Additionally, once their babies hatch from the eggs, the parent eagles not only bring food to them but, in time, also teach them to fly, hunt.

However, no matter how vigilant the eagles might be as parents, they can’t be omnipresent. Every now and then, both parents might have to leave the nest alone for something urgent, leaving their babies undefended. And you’d be surprised to know how many hungry predators lie in wait for such an opportunity.

As we’ve just discussed, eagles typically build their nests on the highest branches of the tallest trees they can find for the safety of their younger ones. This means that the only creatures that can access their nest, even in their absence, are either other birds that can fly or arboreal mammals.

Following are some of the common aerial and arboreal predators of eagle’s eggs and babies:

Doesn’t the very sound of an eagle eating another eagle’s eggs or babies sound gross? Although such a thing is highly uncommon among these raptors, it has happened on some rare occasions in case of food shortage.

While crows and ravens stand nowhere in comparison to the eagles’ speed or strength, these birds are quite gifted in terms of intelligence. And because eagles often go after the eggs and fledglings of these corvids, when an opportunity presents itself, they’re eager to return the favor in kind.

Crows and ravens can stalk eagle movements for days just to figure out where their nest lies. And once they’ve located the nest, they will pick a concealed spot nearby and stay perched, waiting for the parents to fly off and snatch the eggs in haste.

These bandit-faced critters are quite popular among all the nest raiders. They’re arboreal, omnivores, and have a special taste for bird eggs. Therefore, if a raccoon has spotted an eagle nest, there’s no stopping them from trying to steal their eggs.

But suppose a bird was trying to fly off with an eagle egg, but it fell off halfway, or one of their fledglings fell down while fighting among themselves and got injured. They will be vulnerable to a number of deadly predators in the wild, such as:

These predators will prey on not only eagles’ eggs and fledglings but also an injured eagle that is unable to fly.

How many of you have spotted a bow fly in your life? Commonly referred to as “Carrion Flies” or “Bluebottles,” bow flies are a family of flies that land on carrion or feces and carry various dangerous parasites and bacteria around.

These flies are also known to infect bird eggs and, in many cases, spread diseases among young nestlings. And because these nestlings already have a weak immunity in that stage of their lives, any disease can easily kill them.

Do humans prey on eagles?

All the apex predators that are on the top of the natural food chain are either extraordinarily strong and ferocious or exceedingly fast, or both.

However, if we’re being totally honest, the only creature capable of killing or hunting even these apex predators is a human being. So, in other words, humans are the true apex predators on Earth.

Although we don’t possess sharp teeth, nails, talons, keen eyesight or hearing sense, speed, or mass, our brain is our most prized possession, our sharpest weapon.

Now, coming back to the Eagles. As you already know, eagles are large, strong birds with long lifespans and an abundance of food sources to survive on. But have you ever wondered why, despite it all, are some eagle species becoming endangered?

While the population of Golden and Bald Eagles might be growing steadily, there are a number of other species that face the threat of extinction. Some examples of it include Martial Eagles, Philippine Eagles, and Stellar’s Sea Eagles. The truth is, humans are the reason behind their falling numbers, either directly or indirectly. Wondering how? Let’s figure it out.

If you look closely into the causes of the falling numbers of these eagle species, you’ll find that it’s mainly because of habitat destruction. For instance, take Stellar’s Sea Eagles. These birds are considered a glacial relict. Due to the increasing global warming, most glaciers around the world are melting, shortening their habitat range continually.

The same is true for the forest-dwelling eagle species; large-scale deforestation is destroying their homes, making them homeless. Be it climate change or the expansion of human settlement, we’re putting the survival of many species at risk at the expense of our comfort.

While some eagle species are protected in the US by the Migratory Bird Treaty Act, in some parts of the country (and world), hunting them becomes inevitable. This is particularly true for the farmers who suffer a substantial loss of livestock at the hands of these birds of prey.

In addition to it, some elite enthusiasts also indulge in hunting these birds illegally, although the practice has reduced considerably after the strict enforcement of the protection laws.

Excessive use of pesticides

Another threat to the eagles is the increased use of pesticides by humans. In order to protect our trees and plants from the attack of pesky pests, we commonly use different kinds of pesticides. But what we don’t realize is that these pesticides are made of harmful chemicals that can also poison a large number of birds that perch on these trees, including the eagles.

With this, we come to the end of the article. Today, we have learned that eagles, one of the most lethal birds of prey in the world, rule not just the avian world but also the natural food chain as one of the apex predators.

It is because no bird is strong enough to prey on them, and no mammal, no matter how strong they might be, can catch them as long as they’re healthy. However, the eggs and nestlings of these birds have many threats in the wild, which is why their parents guard their nests so vigilantly.

Do Eagles Mate For Life?