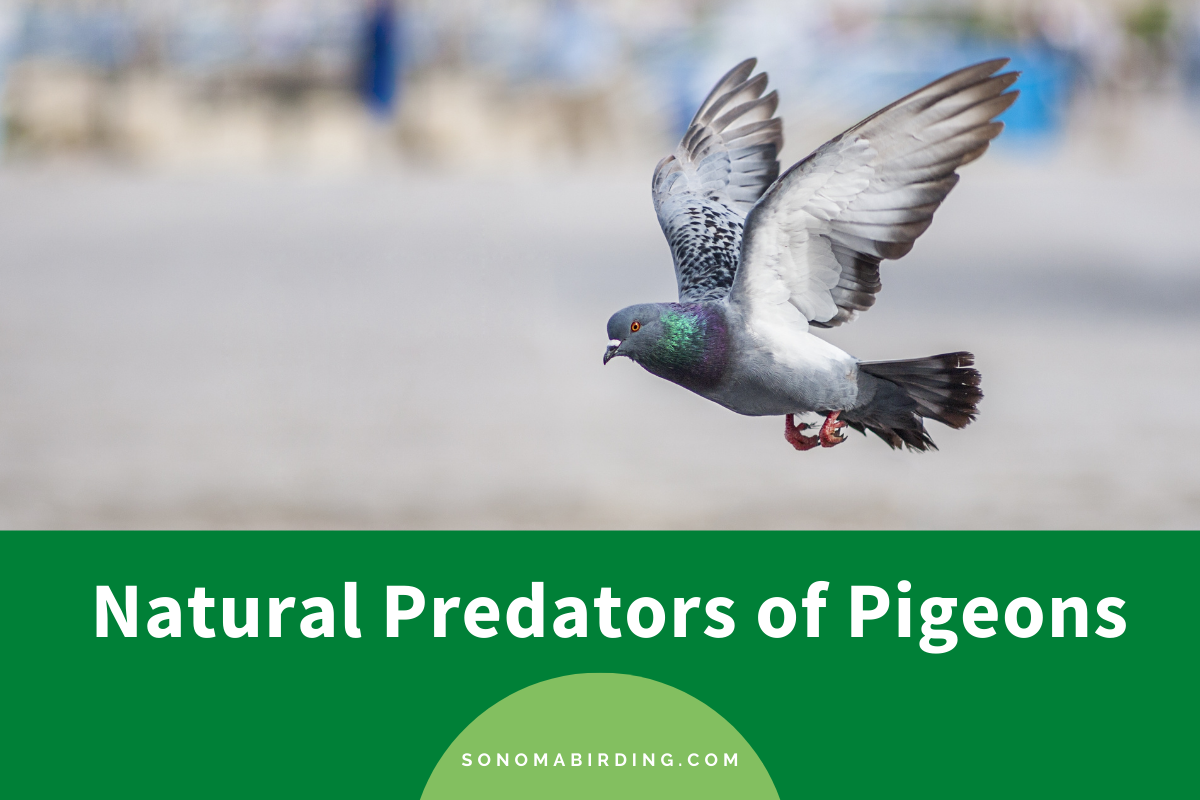 Of all the birds in the world, pigeons and doves are among the most common ones that can be found anywhere you go. Some would even say that they’re almost as common as the crows and mynahs, if not more. And perhaps it might be difficult to notice due to their widespread population, but pigeons also have a large number of predators, both in the air and on the land.

Here’s a list of animals that prey on pigeons:

In this article, we will learn about all these creatures, along with discussing how they hunt pigeons.

As we’ve already established, birds like pigeons are always at risk of predators. It is no secret to us that these birds are preyed upon, attacked, killed, and eaten in many parts of the world by a number of species, including humans. In this section, we will learn about the primary predators of pigeons and how these birds are hunted by them.

Apex predators, such as eagles and hawks, kill pigeons using their talons, while reptiles like snakes use tactful ways to attract these birds and kill them. Let’s talk about all the natural pigeon predators and their hunting techniques elaborately now.

All of us know that falcons are carnivores and feed on smaller birds. These predators are always on the hunt for pigeons to fulfill their appetites. But why do pigeons make up their primary diet? Let’s find out.

The Peregrine Falcons, one of the fastest, deadliest falcon species in the world, have adapted to an urban lifestyle and are successfully thriving in the cityscapes today. It is also fascinating to note that these falcons generally feed on diverse birds, ranging from birds as large as sandhill cranes to the hummingbirds, the smallest members of the avian world. However, not all these birds are easily available in a city, right?

If there’s one bird that can be easily spotted in a city, it is a pigeon. Thus, falcons are one of the primary predators of pigeons. Falcons’ favorable hunting hours are between dawn and dusk, the time when pigeons are at the highest risk of getting hunted by another bird. Wondering why that is? We’ll tell you.

Pigeons have poor night vision. It is at the dark hours when a flock of pigeons settles in their nest, making it an easier chase for the falcons that have brilliant eyesight. These raptors can see four types of light, including ultraviolet light, while even humans can only process three types of light. Isn’t that fascinating?

In addition to their brilliant night vision, falcons also have clenched claws that play an essential role in grabbing the pigeons and killing them.

Just like the falcons, the sparrowhawks are also a group of deadly carnivore birds. These tiny hawks are known to prey on more than 100 bird species. And because pigeons are easy to chase, the sparrowhawks hunt on them most frequently.

Hawks are deadly raptors that use seven different killing mechanisms. They employ different methods to hunt different birds depending on the size and defensive force of their prey. However, their attacking mechanisms do not bring them much success since they end up clenching their target only 10 percent of the time.

But when it comes to pigeons, their attacking techniques don’t make a difference because these plump birds don’t put up much of a fight as a general rule.

Are you familiar with the concept of “apex predator”? Well, these are birds or animals that occupy the highest level of any food chain with no natural predators. The mere fact that eagles are one of the apex predators indicates how powerful they are, which is how they can easily hunt weak birds like pigeons.

Golden Eagles are one of the primary and most widely found species of eagles that actively hunt pigeons. An adult eagle has massive hunting prowess, making it one of the deadliest birds of prey. Even humans are afraid of spotting an eagle in their surroundings.

Are you curious about how apex predators like eagles hunt? Well, we are here to satiate your intrigue. Like all other raptors, eagles hunt using their talons. Their foot constitutes four sharp talons each, three in the front and a large one at the back. This foot structure helps them in grasping the pigeons, even in flight.

Once under the control of the eagles, the pigeons can barely move. The eagles keep pressing their talons deep into the pigeons’ bodies until it kills them. The dominating power of the talons does not let the pigeons take any defensive action.

So far, we’ve learned about the birds of prey that actively feed on pigeons, but what about other classes of creatures? Do reptiles and mammals also feed on pigeons? Yes, they do. Let’s get started with the next section, where we will discuss how snakes, foxes, and ferrets prey on pigeons.

When it comes to poisonous reptiles like snakes, you’ll notice how all living beings, including humans, tend to maintain a safe distance from them. But how do these slithering creatures get a hold of pigeons or any bird that can fly, for that matter? That’s what we’ll figure out here.

Snakes needn’t fly to catch the pigeons when they can simply lure them in using deception. Remember how the bodies of these reptiles are covered in colorful patterns? Well, it comes in handy while attracting the pigeons.

As you already know, pigeons are fond of eating worms, and snakes make use of this fact. Some snakes have a tail that resembles a worm. And as these innocent birds try to eat the snake’s tails, thinking of it as a worm, the snake slowly attacks them.

Snakes are popular for killing big mammals by constricting and squeezing them until their last breath. And after they die, the reptiles gulp them down slowly. You can find countless videos of an anaconda gulping an entire baby monkey on the internet.

Snakes are patient hunters. They lay their trap and wait for the prey to fall into it. In fact, the wrapping and constricting mechanisms of these reptiles are also slow, taking hours to kill a bird or mammal.

Like dogs, the foxes are a canine, omnivorous species that can feed on anything available to survive. Thus, it is likely that they will also feed on pigeons if they can. Foxes have no specific way of hunting down pigeons. They attack these birds when they’re stuttering about on the land, unknown to the fact that foxes are around.

Another reason behind foxes hunting pigeons is their preference for chickens. And since the foxes cannot differentiate between a pigeon and a chicken that well, they’re all the same to these canids.

Additionally, pigeons are abundantly distributed in urban landscapes. Due to this, most predatory birds and mammals, including the foxes, consider them an easy target.

Ferrets are tiny, carnivorous mustelids that mostly rely on fowl for food. Their primary food source is pigeons. However, ferrets have an interesting tendency to be trained eaters and can be told what to eat and what not to eat.

And pigeons are a preferred food for the ferrets in captivity as well as in the wild. As we have discussed earlier, pigeons have weak night vision. On the other hand, the ferrets, being nocturnal creatures, are well adapted to seeing and hunting in the dark, which makes them hunt the vulnerable pigeons quite easily.

Although rarely, rats do kill birds to fulfill their appetite. By now, we have already learned how pigeons are a weak species of birds, and their characteristics make them an easy target for many reptiles and mammals. Even rodents like rats occupy a higher level than pigeons in the food chain.

It is also important to note that one rat is not enough to attack and kill a pigeon. So, several rats get together to attack a dovecote and kill pigeons, leaving no route for them to escape.

With all that being said, can you guess the species that can attack and kill pigeons better than any other bird or animal? You might have guessed by now that the only true apex predators in this world are humans. In the next section, we will learn how we are natural predators to pigeons.

Occupying the highest level in the food chain, humans are capable of overpowering every other species on the earth, be it by force, weapons, or using their brains. You would be shocked to learn that the food habits of early men still persist in many parts of the world.

Humans consume pigeons as one of the derivatives of fowl and as a good source of protein. One of the common recipes cooked with pigeon meat is the Pigeon pie. This is a medieval recipe and is still prevalent in some parts of the world as a traditional delicacy. Some people also prefer eating baby pigeons, known as squabs.

Pigeons are eaten by humans most frequently in the US, UK, Europe, and China. Pigeons are not only easy to catch and kill but are also a fast-breeding species with a rapid reproduction cycle. This indicates that pigeons can produce a considerable number of baby pigeons in a short period, which accounts for their high population.

Pigeons are also very low-maintenance. It is easy for humans to culture them with fewer resources. In return, humans not only get the meat but also have a roost of pigeons for their future needs.

That makes up for the reason why humans are the biggest predators of pigeons as a bird, but do you know who eats pigeon eggs and nestlings? That’s what we will learn in the upcoming section, so keep reading!

Predators of Pigeon Eggs and Nestlings

It is very common for the eggs and nestlings of any bird, including the pigeons, to be at high risk of danger. We know of several animals that look for opportunities to feed on the eggs of a pigeon.

When a pigeon lays eggs, its topmost priority is to keep them safe. However, pigeons can’t always protect their eggs. They have to fly in search of food. There are many predators that keep waiting for such an opportunity.

We’ve already discussed earlier how snakes hunt pigeons. However, what you might not know is that these reptiles are also quite fond of bird eggs. In addition to the snakes, other birds like crows, ravens, jackdaws, rooks, and magpies also feed on pigeon eggs.

Some birds of prey, such as eagles and hawks, tend to carry away the entire nests of pigeons to acquire their eggs as food and nest as a home. For the parent pigeons, it results in the loss of their babies as well as their homes; they’re exposed and vulnerable, with no shelter to go to unless they build a new nest for themselves.

With this, we come to the end of this article. Today, we’ve learned all about the different predators of pigeons, including different raptors, snakes, foxes, ferrets, rodents, and lastly, humans. We’ve also learned that the eggs and nestlings of these birds are even more vulnerable than the adults. In some cases, these harmless birds are even robbed of their nests.