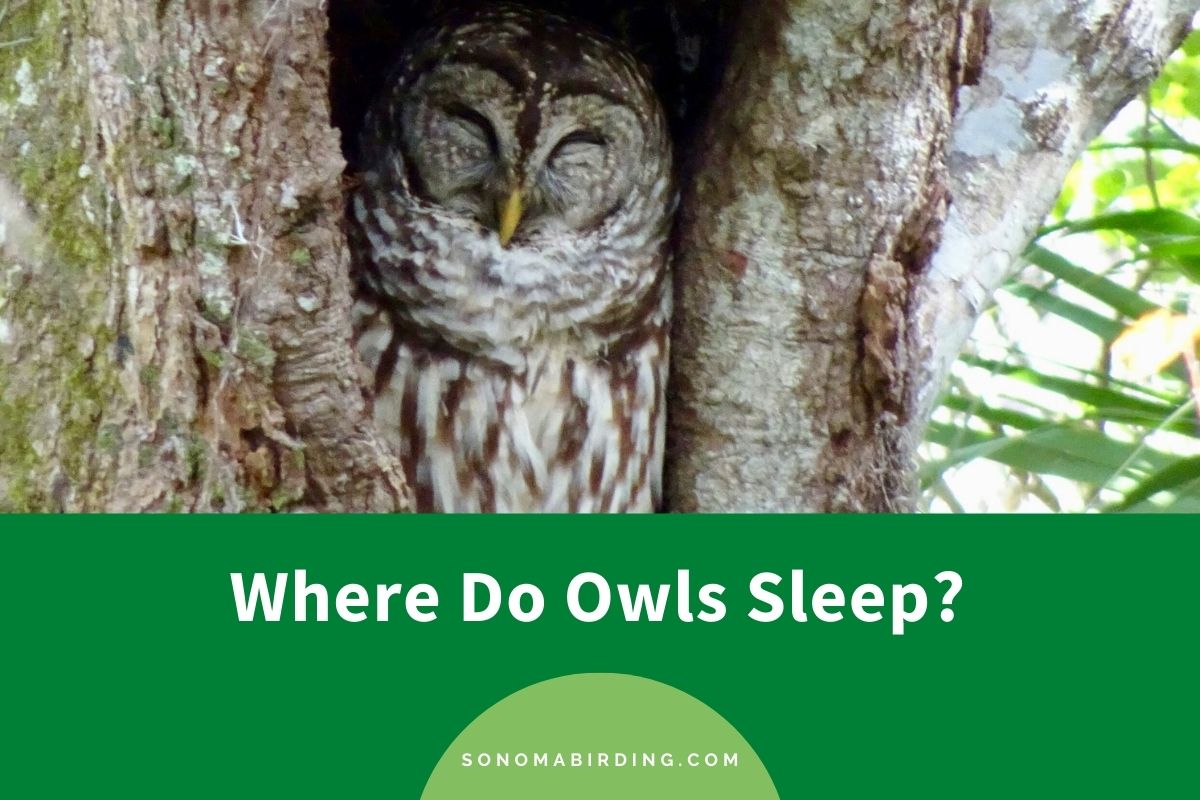 Many birders often express their curiosity about the sleeping patterns of birds like owls that remain inactive throughout the day, only coming out of their roosting spot at night. How much do you know about the sleeping behavior of these nocturnal raptors?

Where do owls sleep? Owls generally tend to look for a vacant, well-hidden spot where they can rest without interruptions. Some species roost in the heart of thick forests, while others prefer abandoned buildings and roofs. The younger ones of owls have a unique sleeping posture. Unable to bear the weight of their heads, they sleep face down.

Are you wondering whether all owls are nocturnal? Or do you want to know more about their consciousness while sleeping? This article will answer all your questions.

Do all owls sleep during the daytime?

The most highlighted characteristic that we identify owls with is their nocturnal routine—being nocturnal sets these birds of prey apart from most birds, making them quite popular.

But have you ever wondered if all owls are truly nocturnal? In a family as large as 200 different species, perhaps there’s room for some exceptions?

The nocturnal owls are a large group that sleeps throughout the day and is active during the nighttime. Their hunting and feeding activities all take place at night.

Because most of the owl population is nocturnal, there’s no point in mentioning all their names. The dark eyes of these owls are a clear indication of their nocturnal behavior.

Moving on, the remaining owls are further divided into two categories, the first one being diurnal owls.

Much like other birds, these owls also remain active during the daytime and sleep at night. The true fully diurnal owl species include Northern Hawk Owls and Northern Pygmy Owls. These owls generally have yellow eyes, which signifies that they like to hunt when the sun is out.

Lastly, the crepuscular owls are those that are most active during dusk and dawn. You can see these owls active during both day and nighttime. These owls are also referred to as the “Twilight Owls” and possess brilliant orange eyes.

Where do owls sleep?

Although birds do not sleep as humans do, there is one similarity between the two; both are vulnerable when they’re asleep. This is exactly why we’re tucked safely inside our homes at night.

However, since birds like owls prefer to inhabit nests only in the breeding season, the rest of the time, they don’t really have a place to call home. So, where do these homeless creatures go to rest and sleep?

The first thing you must keep in mind is that owls are extremely secretive birds that are difficult to spot even when they’re active; very few people have seen them sleeping.

As a general rule, owls look for dark and isolated locations for roosting so that they can sleep undisturbed and undetected. However, their preferences might vary from species to species.

Where do nocturnal owls sleep?

Barn Owls are the most popular and widespread members of the owl family. These owls are solitary roosters, with both males and females roosting separately. They generally have three favorite roosting spots and keep switching between them.

Barred Owls prefer to roost in tall trees, with their roosting site being over 5 meters from the ground. They hide in the dense foliage of the trees, often staying close to the trunk or in tree hollows.

The Long-eared Owls are quite gregarious when it comes to roost. These owls often roost in large groups of 40-50; their numbers can even hike up to 150 at times. As you might have gathered, they’re not territorial about their roosting preferences.

Long-eared Owls choose to roost on the forest edges so that they can quickly travel to open grounds as soon as the day ends. They often prefer trees of cedar.

Where do diurnal owls sleep?

Northern Hawk Owls will roost in open forests of the conifers as well as marshes with scattered trees. They also like to roost in burned parts of the boreal forests.

Northern Pygmy Owls are quite secretive and prefer to roost in thick, continuous forests with streams or water bodies nearby.

Where do crepuscular owls sleep?

Great Horned Owls are known to prefer wooded areas for both nesting and roosting. Some of the trees they’re most likely to roost in include pine, cottonwood, and juniper.

As their name suggests, the Burrowing Owls choose ground burrows for both nesting and roosting. In many cases, they don’t even build these burrows; they simply use the ones made by squirrels or other burrowing creatures.

Unlike other owls, the Snowy Owls steer clear of dense forests and prefer more open areas for roosting, such as hills, mountains, and rocks. During migration, you will often find them roosting in abandoned buildings and other manmade structures.

The Short-eared Owls tend to roost in grasslands and other desert habitats, where they can find short trees that provide plenty of shelter. It is under these trees that they generally roost.

The Great Grey Owls are quite particular about their roosting sites. They generally look for an area that combines both dense forests for roosting and open grounds for hunting. You will often find them roosting in bogs, meadows, and forests of conifer trees.

For how long do owls sleep?

How long do you suppose would any bird sleep for? Birds like parrots, doves, pigeons, and chickens need about 12 hours of sleep a day to function effectively. Since the anatomy of owls is no different from these birds, they would need the same amount of sleep.

Many people who have never seen large and elusive birds like owls sleep believe that they don’t even need sleep. However, that’s completely untrue. Owls might be deadly predators, but they’re still birds.

Do all owls use the same roosting spot every day/night?

Yes, most owl species return to the same roosting spot every night. It is because these birds are sharp and deadly predators themselves and needn’t change places to avoid predation like smaller birds.

However, some species are exceptions to this rule; they have multiple roosting spots and could go to any one of those when they need to sleep.

How do owls sleep?

Most of you might already know this, but the concept of sleep is not the same among humans, animals, and birds. Birds have their own way of sleeping, which is very different from how we do it.

Many studies have shown that half of an owl’s brain is still active when they’re asleep; it’s only the other half that sleeps. This is because they’re wild creatures that can never be too safe. In the wild, no matter how strong you are, someone stronger can always kill you.

Interestingly enough, some owl species can also sleep with their eyes wide open. If you see them up close, they will not appear to be sleeping at all. However, whether their eyes are opened or closed, poking at a sleeping owl is very dangerous. They might injure you severely.

Do owls sleep upside down?

Just because owls are nocturnal like bats, most people think they hang their bodies upside down while sleeping. However, this is completely illogical and untrue for multiple reasons.

First and foremost, owls are birds, while bats are mammals with the ability to fly. This means that apart from the fact that they can both fly, you can’t hope to find similarities between the two.

Furthermore, owls are heavy-headed birds, with their heads often contributing to about 30-40% of their total mass. With that kind of weight, it becomes almost impossible for these birds to hang themselves upside down, even while they’re awake, let alone in sleep.

How do baby owls sleep?

This is where things turn interesting. When the owls haven’t reached complete maturity, they’re not as strong as they’re supposed to be. During this time, their lower bodies are frail and cannot bear the weight of their large heads while sleeping.

Therefore, these babies sleep with their face down; their faces are directly on the ground, and they sleep on their bellies like us. Just imagine how adorable that would look.

However, as they grow into mature adults, they follow the same sleeping position as any other bird; by perching and holding the branch tight with their claws.

Conclusion: Where do owls sleep?

With this, we come to the end of this article. The first lesson we’ve learned today is: owls are truly fascinating creatures. These birds stay awake and hunt all night long, and as the sun comes up, they find a crevice to rest.

We’ve also learned that not all owls are nocturnal; diurnal and crepuscular owl species exist as well. You learned all about them above. Lastly, we discussed how the way baby owls sleep is absolutely adorable.