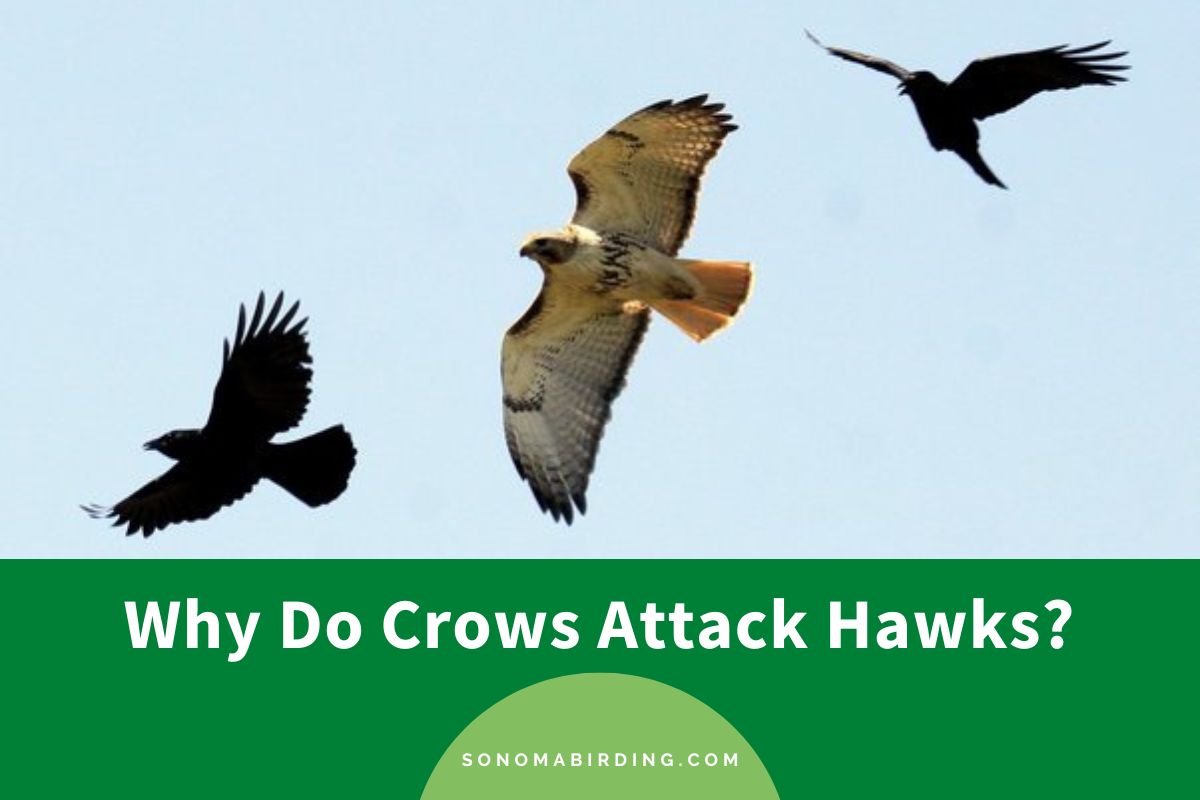 If you’ve ever seen a group of crows chasing a hawk through the sky, you may have wondered what’s going on. Why do these smaller birds, which are often preyed upon by hawks, go out of their way to attack their larger and more powerful counterparts?

The short answer is that crows attack hawks for a variety of reasons, including protecting their young, defending their territory, and mobbing behavior. Crows are highly social birds and form strong bonds with their families, so they are willing to defend their offspring from potential threats like hawks.

They are also highly territorial and will defend their nesting and foraging areas from intruders, including hawks. Finally, crows may attack hawks as a form of mobbing behavior, where a group of birds band together to intimidate or drive off a potential predator.

In this blog post, we’ll take a closer look at the fascinating behavior of crows and why they sometimes attack hawks. From their clever tactics to their incredible social bonds, crows are truly remarkable birds, and their interactions with hawks offer a glimpse into their complex and intelligent lives.

So read on to learn more about the intriguing world of crow-hawk relations!

Contents show
Crows vs. Hawks: An Ancient Conflict
Why don’t the hawks fight back when mobbed?
Are other creatures also mobbed?
Related Articles

Crows vs. Hawks: An Ancient Conflict 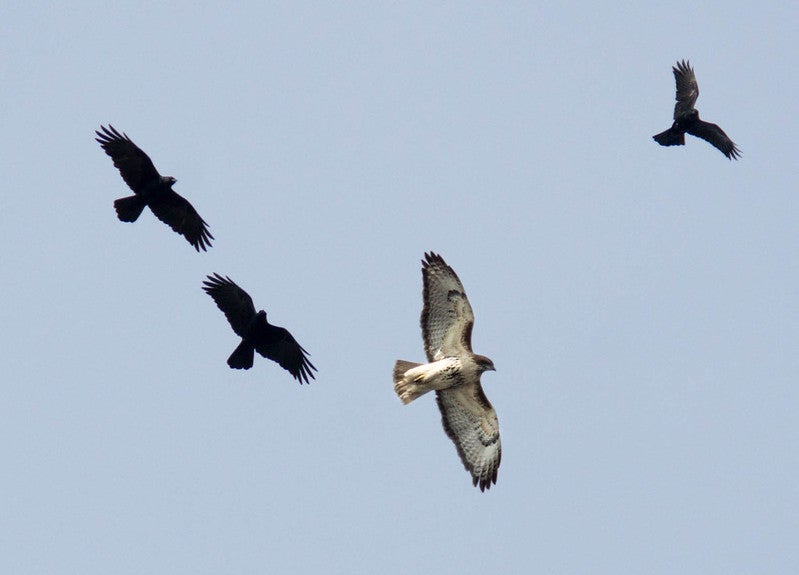 In the avian kingdom, the birds of prey or raptors are the most powerful and dangerous birds. Their characteristically strong feet, sharp talons, keen eyesight, and hooked beaks help them catch almost any prey they set their mind to. Eagles, kites, hawks, falcons, goshawks, and owls are all categorized as birds of prey.

Sitting atop the food chain, raptors are also avian avivores, meaning they prey upon other, smaller birds. Their prey mostly includes birds like sparrows, robins, warblers, doves, and pigeons, as well as their eggs and fledglings.

Occasionally, they can also go for slightly larger birds like chickens, especially if they happen to be hunting in a group. However, birds of prey are generally solitary creatures and prefer to be alone except during their mating season to avoid competition for prey.

On the other hand, Crows are one of the most intelligent and cunning members of the avian world. This makes many bird enthusiasts wonder why they ever go after the powerful hawks.

Even a murder of crows, let’s say, three to six crows together, cannot necessarily kill a hawk unless it’s injured or old. So, why attempt to do the impossible, especially when the crows are unthreatened?

What they’re doing is called mobbing: a highly aggressive, anti-predator strategy used by smaller birds to defend their nests, younger ones, and the rest of their flock. When a flock of birds is mobbing a predator, they dive-bomb around them, fly above them, squawk loudly, and even defecate on them.

There are a few explanations for why crows perform mobbing, a potentially dangerous activity, but there is no definite answer.

The most obvious answer is defense. Crows are highly territorial birds, more so during their mating season. If they spot a hawk around their territory at that time, they might attack it. However, they don’t intend to kill the larger bird; they just drive it away from where they’ve built their nest.

Secondly, it has been noticed that crows and other small birds often learn from their kin about who or what to attack. If a single crow is aggressively gesturing around a hawk, other crows join it, too. So, one of the reasons behind mobbing might be educating their young ones and other members of their flock.

Thirdly, mobbing might simply be a way for the crows to alert their brethren about the predator in their midst. An alert bird in the middle of a flock is much harder to bring down than a bird caught unaware.

Besides protection and defense, mobbing is a great strategy to steal another bird’s food. While a few mobbers distract the bird, one of their companions swoops down from behind and steals their prey.

Why don’t the hawks fight back when mobbed?

You might still be wondering about the mechanics of mobbing. How can small birds attack a larger predator? Won’t it attack or even kill them?

Well, it’s still a subject of debate among ornithologists. If a raptor were to retaliate and snatch a few smaller birds, mobbing as a defense technique will likely cease. Nonetheless, we still don’t know exactly why hawks don’t fight back the crows in a mobbing; all we have is an educated guess.

Hawks are strong and skilled, but they’re also intelligent. Let’s say a murder of crows is pestering a hawk to leave their territory by raising a ruckus around it.

While a hawk can bring down two to three crows if it wants, it’s too much of a hassle. Crows might act irritating at the moment, but these birds are highly agile. If the hawk isn’t hunting for prey, it’s not worth its energy and time to go after crows when it has the simple choice of flying away.

Are other creatures also mobbed?

Birds can mob anything that might resemble danger. While their list has day-flying raptors and owls at the top, they aren’t the only victims of mobbing.

Cuckoos, for example, are relatively harmless birds. However, they have the ability to resemble birds of prey and use it to intentionally trick other birds into thinking they are predators. As a result, they are often mobbed by other flocks of birds.

Cats, dogs, snakes, and even humans are mobbed if they give the impression that they might be dangerous to a bird or its nestlings.

Mobbing is a learned behavior, meaning that birds imitate other birds who mob certain creatures or even things. Inanimate objects like trash cans, statues, and hydrants can also end up being mobbed because of this.

While crows are the most frequent mobbers, the behavior is observed in various species. Gulls and terns also have an impressive track record for mobbing.

At first glance, it looks like a foolish move on the crows’ part to attack a seemingly harmless hawk near their territory. However, a bird can never be too careful, especially during its mating season when its nestlings are nearby.

Mobbing is a common defense mechanism among birds to protect their nestlings and other birds in the flock. It’s also a commonly used technique to steal the food of a loner bird. However, there’s still no completely accurate answer to why birds actually mob day-flying raptors.

The reason why hawks choose to fly away or endure the mobbing instead of attacking the birds is also a mystery. While some claim it’s to preserve their energy, won’t it be more energy-preserving to stop the mobbing altogether?

Vulture vs. Hawk: What’s the Difference?

How To Scare Away Hawks? (10 Effective Ways)

Do Hawks Mate For Life?