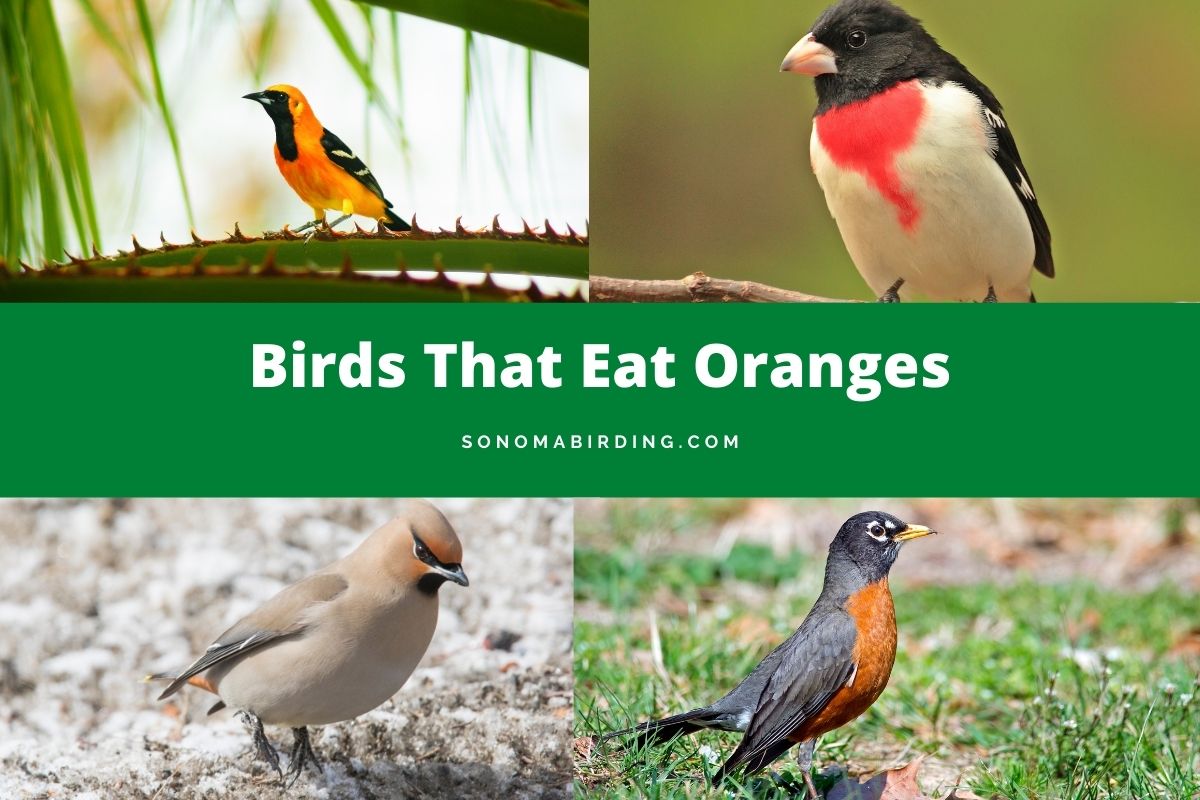 It is every birder’s dream to see their backyard filled with colorful, chirping birds flying around. However, not all of them have the time to go out and purchase seeds and suet for the backyard birds.

But what if we told you that you could share your food, particularly fruits, to bring many birds into your backyard? Which birds eat oranges? Let’s find out.

Here are the birds that commonly eat oranges:

In this article, we will talk about all these birds that enjoy eating oranges. We’ll also discuss how you can use fruits like oranges to lure these birds to your yard.

Named after the colors of Lord Baltimore’s coat-of-arms, the Baltimore Orioles are a migratory species belonging to the Icterid (New World Blackbird) family. However, these colorations can only be seen in adult males.

Like most icterids, these orioles have a sturdy body, a slightly longer tail, pointy-edged bill, and fairly long legs.

Both sexes have bars on their wings; however, apart from that, they appear quite different.

The males are slightly larger than the females and have a black head, back, and plumage. Their underparts are orangish-yellow, with several yellow feathers in their tail.

The females lack the jet-black coloration of their male counterparts and have a yellowish-brown body. Their underparts are pale white, with yellowish head and rump; the color of their plumage is a dull brown.

Commonly known as “Cut-throat” due to the coloration on their chest, the Rose-breasted Grosbeaks are a grosbeak species belonging to the cardinal family.

While these birds display very little dimorphism in size, they are highly dimorphic in plumage.

The males’ heads, back, wings, and tails are jet-black in color, while their underparts are white. On their chest, they have a red, V-shaped mark that their species are named after.

On the other hand, the females have a greyish brown body, with their chest covered with brown streaks and a pale white belly and rump. Their head, back, and wings are darker brown, with three prominent white stripes marking the top of their head.

Primarily inhabiting the coniferous forests, the Bohemian Waxwings are one of three species in the waxwing family.

These birds are commonly found in the northern forests of North America and display very little sexual dimorphism.

They have an overall pale, brownish grey body with a short tail and a crest atop their head. On their wings, these birds bear white, yellow, and red markings.

The males also have a bold black eye mask and throat, which is duller and less prominent than their female counterparts.

Commonly found in the southwestern parts of the United States, the Hooded orioles are a passerine bird species from the New World Blackbird family.

These birds display sexual dimorphism. The males have orangish-yellow heads and underparts, with a black face mask and throat, wings, and tail.

On the other hand, the females have olive-green heads, light yellow underparts, and duller wings and tails. They also have a black throat patch, but it is pale in comparison to their male counterparts.

The Red-bellied Woodpeckers have a misleading name because they don’t have a red belly, as their name suggests, but sport a red shade on their heads instead.

Due to this misconception, most people confuse them with the Red-headed Woodpeckers (Melanerpes erythrocephalus), a species that they’re not even closely related to.

These woodpeckers have pale grey faces and underparts and display sexual dimorphism. The males have a red cap on their head, beginning from their bill and extending to their neck.

On the other hand, the females bear only a red patch on the nape of their neck and a smaller one right above their bill. Both sexes have plumage covered with black and white streaks.

They also have a faint reddish patch on their lower belly, but it is fairly light and can hardly be used as a field identification mark.

Named after the European Robins (Erithacus rubecula) due to their orange breast, the American Robins are a medium-sized songbird species that belong to the thrush family.

These birds display sexual dimorphism; the males have a dark head, orangish breast, brown back and feet, and yellow bill. The females are more or less similar but lack the male’s dark head.

On their heads, these birds possess a brown tint. The rest of their body is similar to the males but with a dull coloration.

Known for being the smallest members of the Icterid family, the Orchard orioles are a small passerine bird species that breed across the eastern regions of North America.

These birds have a lean body, a short and broad tail, and a pointed bill. They display sexual dimorphism; the males have a black head, back, wings, and tail, with bold orange bars on their wings. Their underparts are covered in brownish-orange shade.

The females lack the dark coloration of their male counterparts and have an olive-green upper body with a lighter belly and rump. Their wings are a darker olive green and have white wing bars. The juveniles take after their mothers.

Brown Thrashers are among the larger thrasher species belonging to the mimid family. These birds have a brown upper body with a reddish tinge to it.

Their underparts are white but covered in dark brown streaks. Both sexes of Brown Thrashers are similar and display minimal sexual dimorphism.

Belonging to the mimid family, the Gray Catbirds are a monotypic member of the Dumetella genus. Although these birds are not closely related to the mockingbirds, they’re also known as “Slate-colored Mockingbirds” in some regions.

Both sexes of gray catbirds are identical in appearance and display minimal sexual dimorphism. They have an overall lead-gray body with a patch of dark grey on their heads. They have thin bills; their legs, eyes, and bill are all blackish in color.

Although the Scarlet Tanagers were initially placed in the Tanager family, they are now members of the Cardinal family. These American songbirds breed in the eastern part of North America.

Scarlet tanagers are small birds that display significant sexual dimorphism in terms of their plumage. The males have an overall bright orange body, with their wings and tail being black.

On the other hand, the females have an olive-green back with their wings and tail covered in a darker tone of the same. Their underparts are colored in a lighter shade of yellow. Both sexes have black eyes and pale, cream-colored bills.

Known among the most widespread mockingbird species in North America, the Northern Mockingbirds are non-migratory passerine birds.

These mockingbirds display minimal sexual dimorphism and are identical in appearance. They have a grey head and back, with a blackish touch to their dark grey wings and tail. Their underparts are pale greyish white.

Named after the English Antiquarian and Naturalist William Bullock, the Bullock’s Orioles are members of the Icterid family that breed in eastern parts of North America.

These orioles display a significant sexual dimorphism; the males have an orange and black body. Their wings and tail are black, along with a bold black eye mask and throat patch.

On their wings, they display a bold white bar on each side. The rest of their body-head and underparts- are all bright orange in color.

In contrast, the females have a dull greyish brown head and back, with darker wings and tails. Their underparts are pale white, with touches of yellow near their throat and on their rump.

Just like the Scarlet Tanagers, the Western Tanagers were also once placed in the tanager family but are now members of the Cardinalidae.

These birds have a stout bill and display sexual dimorphism; the males have a reddish face with yellow underparts and black back, wings, and tails. The reddish tinge on their face grows much lighter in the non-breeding males.

On the other hand, the females have a dull yellow head and underparts, with their back covered in olive green and a darker tone on their wings and tails.

Belonging to the family of the New World Sparrows, the Eastern Towhees are a towhee species that breed in the eastern parts of North America.

Eastern Towhees are quite large and stocky for a sparrow and have white underparts, a long, dark tail, and two rufous patches on their belly, one on each side.

The adults display sexual dimorphism; the males have a black head, upper body, wings, and tail. On the other hand, these parts of the female’s body are brown in color.

Before you use oranges to lure the birds we have discussed earlier, you must keep one thing in mind.

Just because all these birds are fond of oranges doesn’t necessarily mean they’ll prefer orange over other bird foods, like seeds, suet, or insects.

It is always better to add multi- container feeders with seeds, fruits, berries, and suet for effectively drawing backyard birds. It gives the birdies more choice and is the key to bringing in a larger crowd.

Getting back to oranges, they are not the kind of fruits that you can chop into smaller pieces. Oranges are consumed after peeling them and separating all the slices.

Interestingly enough, the birds eat oranges more or less as we do, which means you won’t have to go through any extra trouble on their behalf.

While platform feeders work well for oranges, some birders have claimed that hanging an orange slice from a nail or a suet-feeder can be more effective.

Lastly, make sure to check the feeder every night and throw away any piece of orange that has been left behind. Otherwise, it might invite pests like ants to the feeder.

If you’re a bird enthusiast, you might already know that a majority of backyard birds, including orioles, robins, catbirds, woodpeckers, tanagers, and waxwings, are fond of eating fruits.

So, if you have to use fruits to lure them in, how would you do that? Confused? Let’s help you out by suggesting some quick tricks and tips on it:

In this article, we learned about 14 backyard bird species commonly found in North America that enjoy oranges. Moreover, we also looked at some interesting tips and tricks on using fruits like oranges to lure these birds into your yard.

The next time you put out oranges in your yard and spot a birdie biting on it, you will know exactly what species it is.