Chickadees are a group of North American birds belonging to the tit family. While there are seven species in their genus, the most remarkable of them all is the Black-capped Chickadees.

These birds are not just the most vibrant members of the group but are also adored by the people of North America. The evidence of it lies in the fact that they’re named the state bird of two states – Maine and Massachusettes – as well as the provincial bird of New Brunswick in Canada.

Members of the Chickadee group: The Carolina Chickadees are a small, non-migratory chickadee species found in the mixed or deciduous forests of North America. These birds lack sexual dimorphism, with both adult sexes appearing identical.

They have a prominent black cap and bib on their otherwise white face, with black eyes, legs, feet, and short, black bills. Their upperbody is grey with darker wings and tail, while the undersides are white. They also have brownish flanks.

Carolina Chickadees are first on our list of Black-capped Chickadees’ lookalikes for a good reason. These birds are so similar in appearance that it’s impossible for many to tell them apart, even from up close.

The only way to distinguish between them is by their flanks. The flanks of Black-capped Chickadees are a richer, warmer brown than that of the Carolina Chickadees. 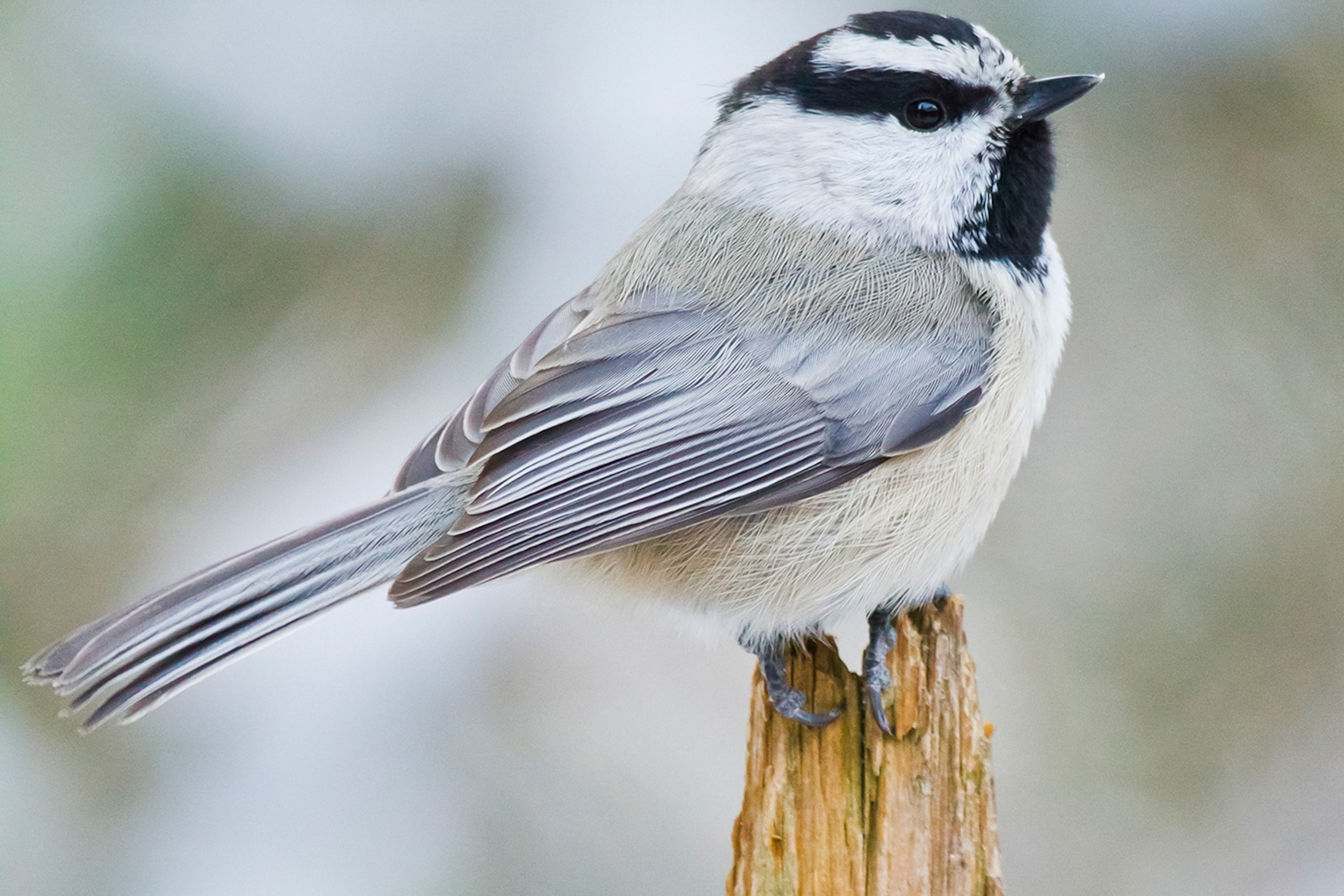 As their name suggests, the Mountain Chickadees are small passerine birds found in the mountain forests of the western United States. These birds have a special appetite for the conifer seeds, although they focus more on consuming insects during their breeding season.

Displaying sexual monomorphism, both sexes of adult Mountain Chickadees have the same appearance. They have a white head with a black bib and three black stripes running across their crown. Their upper parts and flanks are a darker shade of grey than their underbody. Their eyes, bills, legs, and feet are all black.

While Mountain Chickadees are about the same size as the Black-capped Chickadees and sport a similar plumage, you can tell these birds apart using the following differences: 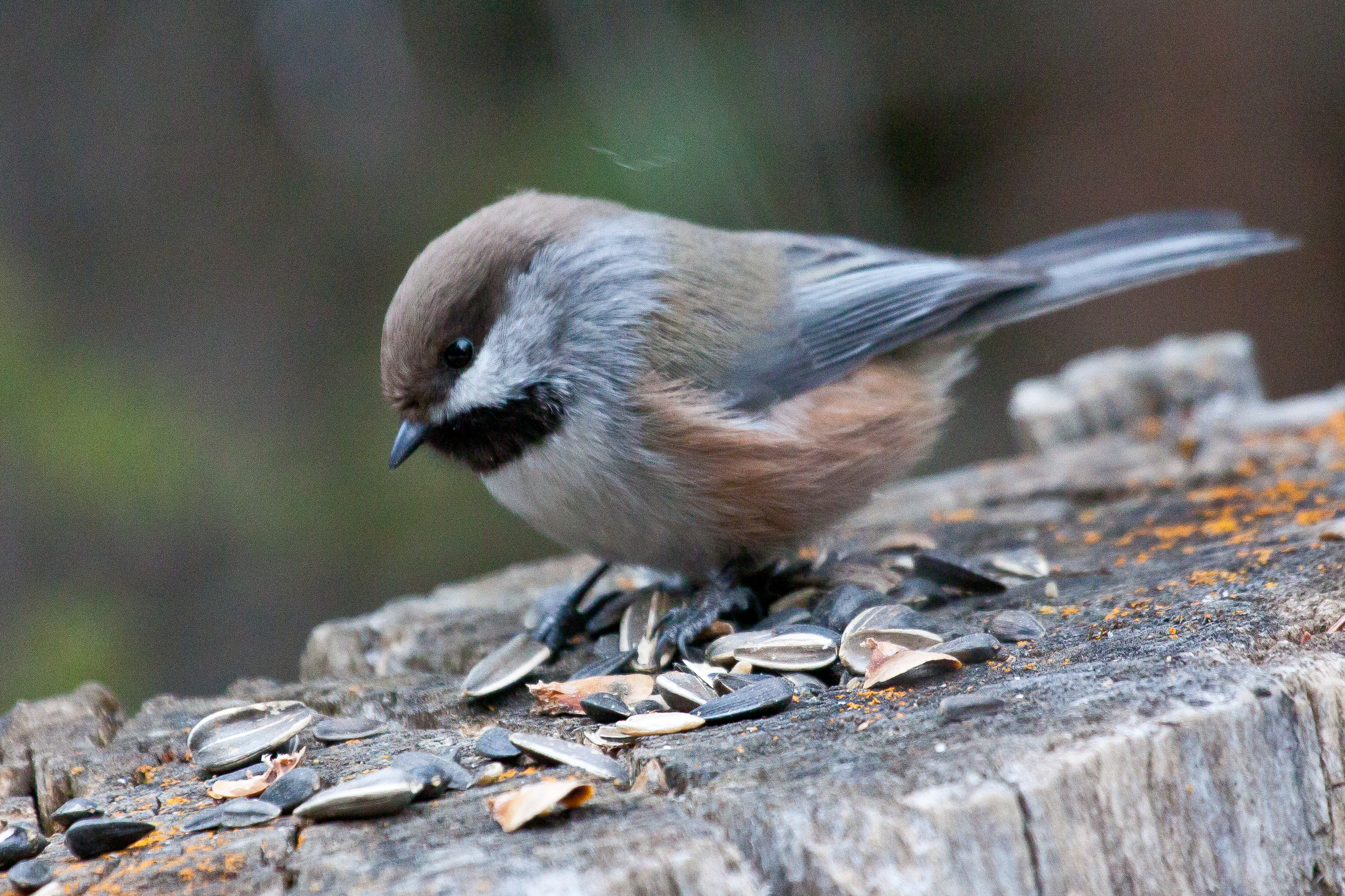 Known for their high-pitched trills, the Boreal Chickadees are small American songbirds that dwell in the boreal forests of the northern United States and Canada. These birds are sexually monomorphic, with both sexes having the same size and plumage.

Their greyish-white face has a brown cap and a black bib, which is also the color of their eyes, bills, and legs. The upper parts are a mix of grey and brown, with darker touches on their wings and tail, while the lower body is white, except for the brown flanks.

While both Boreal and Black-capped Chickadees have similar body structures and plumages, there are some major differences between the two as well.

Boreal Chickadees have brown caps, unlike the black caps of the latter. Moreover, their underparts are pale grey, while that of the Black-capped Chickadees are white. 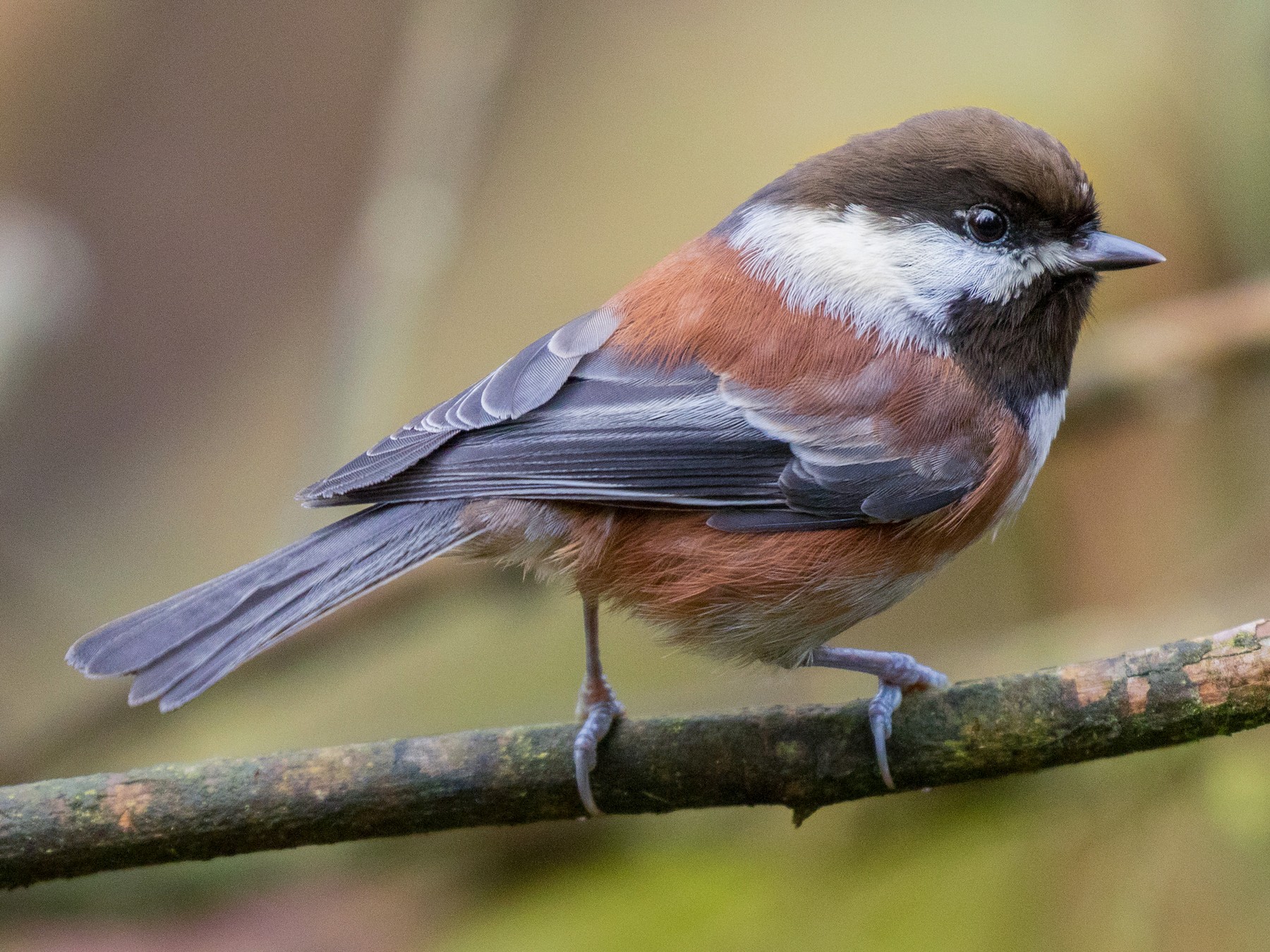 The Chestnut-backed Chickadees are small members of the tit family found in the low-elevation coniferous forests of North America. As their name suggests, these little songbirds have primarily chestnut-brown plumage.

Their flanks bear a lighter shade of brown than the back, while the rest of their underbody is white. On their heads, you’ll spot a dark, almost blackish-brown cap with a similar colored bib below their bills. Their wings and tails are dark grey, while their eyes, bills, and legs are black.

Both Chestnut-backed and Black-capped Chickadees have head caps and bibs with white cheeks. Their wings and tails are similarly colored as well.

The major difference between the two is the absence of brown in the Black-capped Chickadees’ back. Their caps and bibs are also black, while that of the Chestnut-backed Chickadees are dark brown. 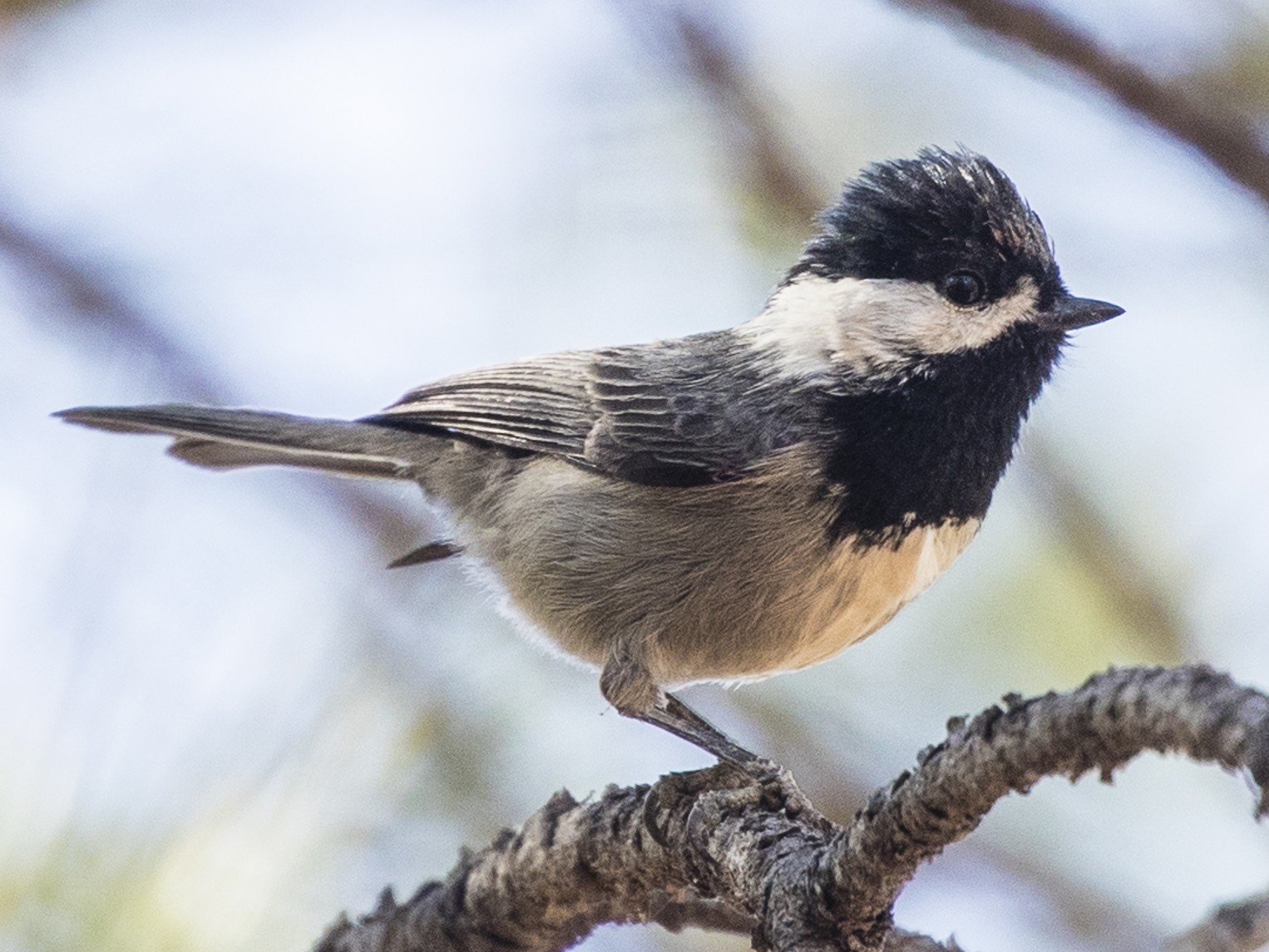 Found in the wooded highlands of Mexico, the Mexican Chickadees are a non-migratory chickadee species that are often seen feeding with multi-species flocks.

Much like the other chickadees, these birds also lack sexual dimorphism. The adults have primarily grey plumage with white cheeks and undersides, grey flanks, wings, and tails. They also possess a fluffy black cap and bib that extends up to their chests.

Mexican Chickadees have black caps and bibs just like the Black-capped Chickadees, with grey wings and tails like the latter as well. Both birds are also roughly the same size. 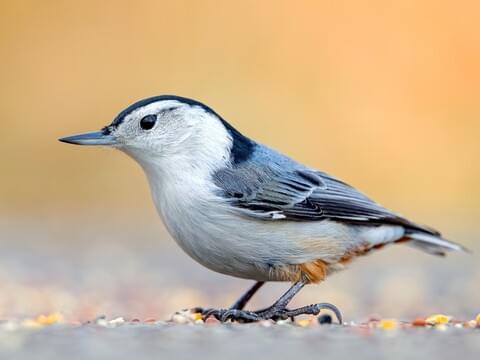 The White-breasted Nuthatches are small songbirds that dwell in the low-altitude deciduous forests and mixed woodlands of North America. These birdies have seven subspecies, with the adult sexes displaying sexual dimorphism.

The males have brighter plumage and broader back band than their female counterparts, but no variation in size is seen. Both sexes have a pale, bluish-grey face and underbody, with a glossy black cap extending into a back band. Their wings and tails are dark grey with paler fringes, with black legs, eyes, and bills.

White-breasted Nuthatches resemble the Black-capped Chickadees in their white face and underbody, black cap, grey wings, and tails. Their eyes, bills, and legs are black as well. 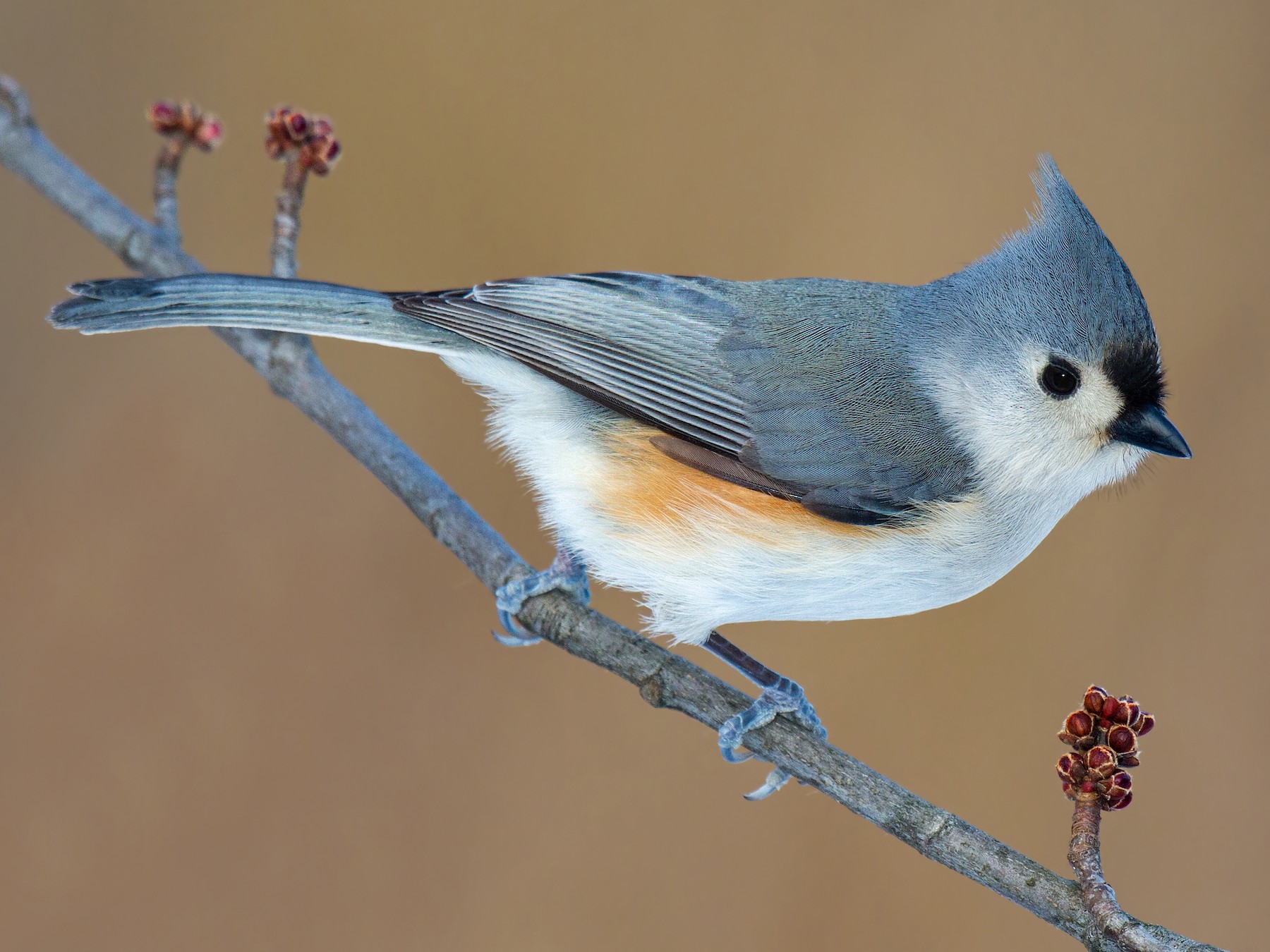 Although the Tufted Titmice were initially endemic to the river basins of Mississippi and Ohio, their territory is now extended across the United States and some parts of Canada.

These little birdies belong to the same family as the tits and chickadees and are sexually dimorphic in size, with the males being the larger sex. The adults have a grey crest or tuft, with the same color extending throughout their backs, wings, and tails.

Their face and underparts are all stark white, except for brown flanks. The eyes and bills are dark, while the legs are greyish.

While both Tufted Titmice and Black-capped Chickadees have grey backs and white underbodies, the two have many differences in their appearances as well. 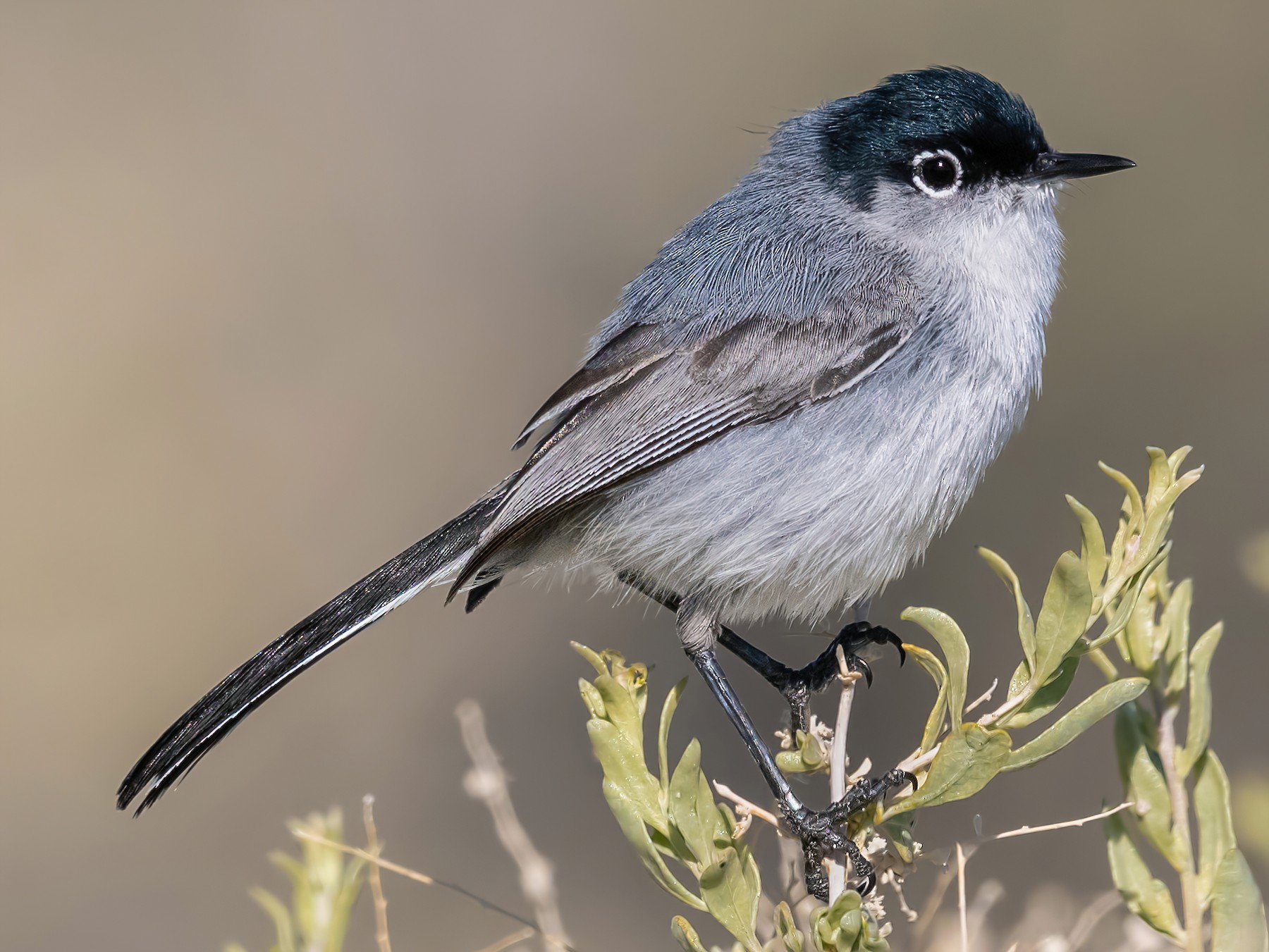 The Black-tailed Gnatcatchers are tiny songbirds that inhabit the arid regions of North America permanently. You can spot these birdies in the Chihuahuan and Sonoran Deserts all year long.

While the adults of this species are sexually monomorphic, the males do develop a prominent black cap during breeding months which is absent in their female counterparts.

Both sexes have white eye rings, bluish-grey heads, and backs, while their underparts are pale whitish. The wings are greyish as well, whereas the tails are completely black, as their name depicts.

While the Black-tailed Gnatcatchers do have black caps, grey backs, and white underparts just like the Black-capped Chickadees, that’s where the similarities end.

The bills of Black-tailed Gnatcatchers, although black, are thinner and longer than that of the Black-capped Chickadees. These gnatcatchers also lack the black bibs and brown flanks of the latter and are much more lightweight than them. While the Blackpoll Warblers are fairly small songbirds, they’re one of the largest members within their genus. These New World Warblers breed in the high-elevation woodlands of North America and fly down to South America during winter.

Both sexes of adult Blackpoll Warblers are identical in appearance, except for the breeding plumage of the male, which is more vibrant and has a black cap. Their face and underparts are white, with grey backs streaked heavily with black and brown.

You can also spot light-black streaking on their chest. Both sexes have black eyes, grey bills, and orangish legs. The black cap, white cheeks, and underparts of Blackpoll Warblers resemble that of the Black-capped Chickadees.

Here are the major differences between these birds:
• Black-capped Chickadees have black bibs and brown flanks, both of which are absent in the Blackpoll Warblers.
• The underbody of Blackpoll Warblers has some streaking, while that of the chickadees is completely unmarked. Also referred to as Desert Sparrow due to their choice of habitats, the Black-throated Sparrows are tiny birds belonging to the New World Sparrow family. As their name suggests, these birds have a prominent black patch on their throat, while the rest of their upperbody is grey, and their underparts are white.

You can also notice two white eyebrow stripes on their otherwise grey heads, and partial white eye-rings under each eye. Their conical bills are grey in color, and so are their legs. The adults are sexually monomorphic, being identical in size and plumage.

The similarities between Black-throated Sparrows and Black-capped Chickadees include their grey backs, black bibs, white underbodies, and dark eyes.

With this, we have reached the end of our article. Let’s do a quick revision of everything we have learned so far.

We began by talking about the stunning Black-capped Chickadees and their popularity all over North America. Then, we moved on to talk about ten birds that resemble these chickadees closely. As you can imagine, half of the birds are other members of the chickadee group itself, while the other half consists of their close relatives, such as nuthatches, titmice, sparrows, and gnatcatchers.

Is there any other bird whom you always tend to confuse with other species? Tell us their name in the comments below, and we’ll be back with a list of their lookalikes soon!