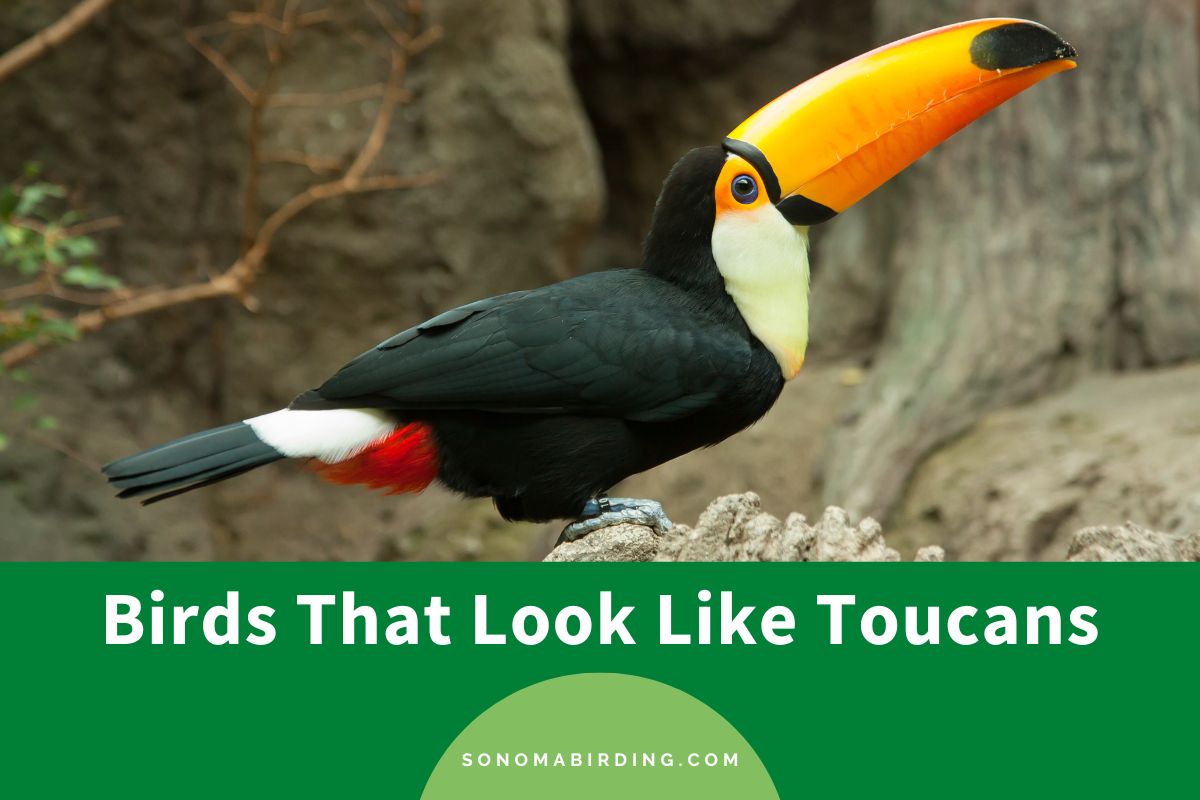 If you look up birds with the strangest bills on the internet, the Toco Toucans are bound to rank on top of it. These birds have bills that are both massive and colored diversely. Another fascinating thing about them is that despite their size, they’re not heavy at all.

This is because these bills are made of keratin, which, although hard, is hollow from the inside. Doesn’t that sound interesting? It might even make some wonder if these birds are one of a kind. But before you go further down the road, we’ll have you know that these toucans are not as unique as you’d think, at least not in their appearance.

In this article, you’ll find a list of eight birds that resemble the Toco Toucans and learn about the similarities they share with them. Let’s get started! 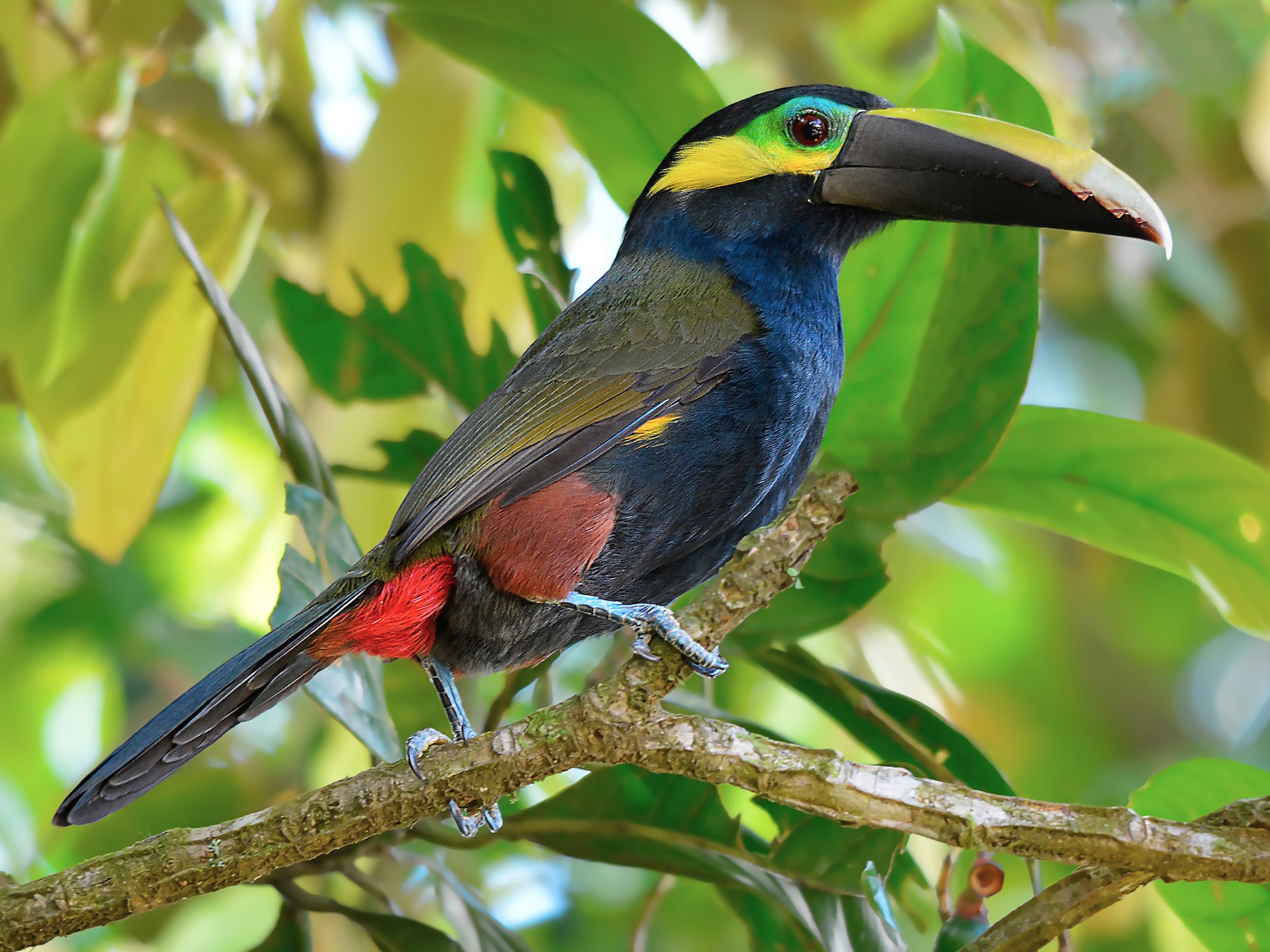 Also referred to as Cassin’s Aracari, The Yellow-eared Toucanets are a small member of the toucan family that dwells in the humid forests of the Choco and Central America.

These birds have a dark face and upper body, with tiny yellow patches on their flanks, touches of brown on their belly, and a red rump. Their wings are olive-green, with a darker tail and blue legs.

Around their eyes, you’ll notice a greenish yellow patch, which extends further back in the males than in females. The males also possess darker heads than the brown ones of their female counterparts.

While the Yellow-eared Toucanets share black underparts and large bills with Toco Toucans, the two birds look nothing like each other.

Yellow-eared Toucanets are not only smaller and more lightweight than the latter but also possess more vibrantly colored plumages. However, their bills are darker than that of the toucans. 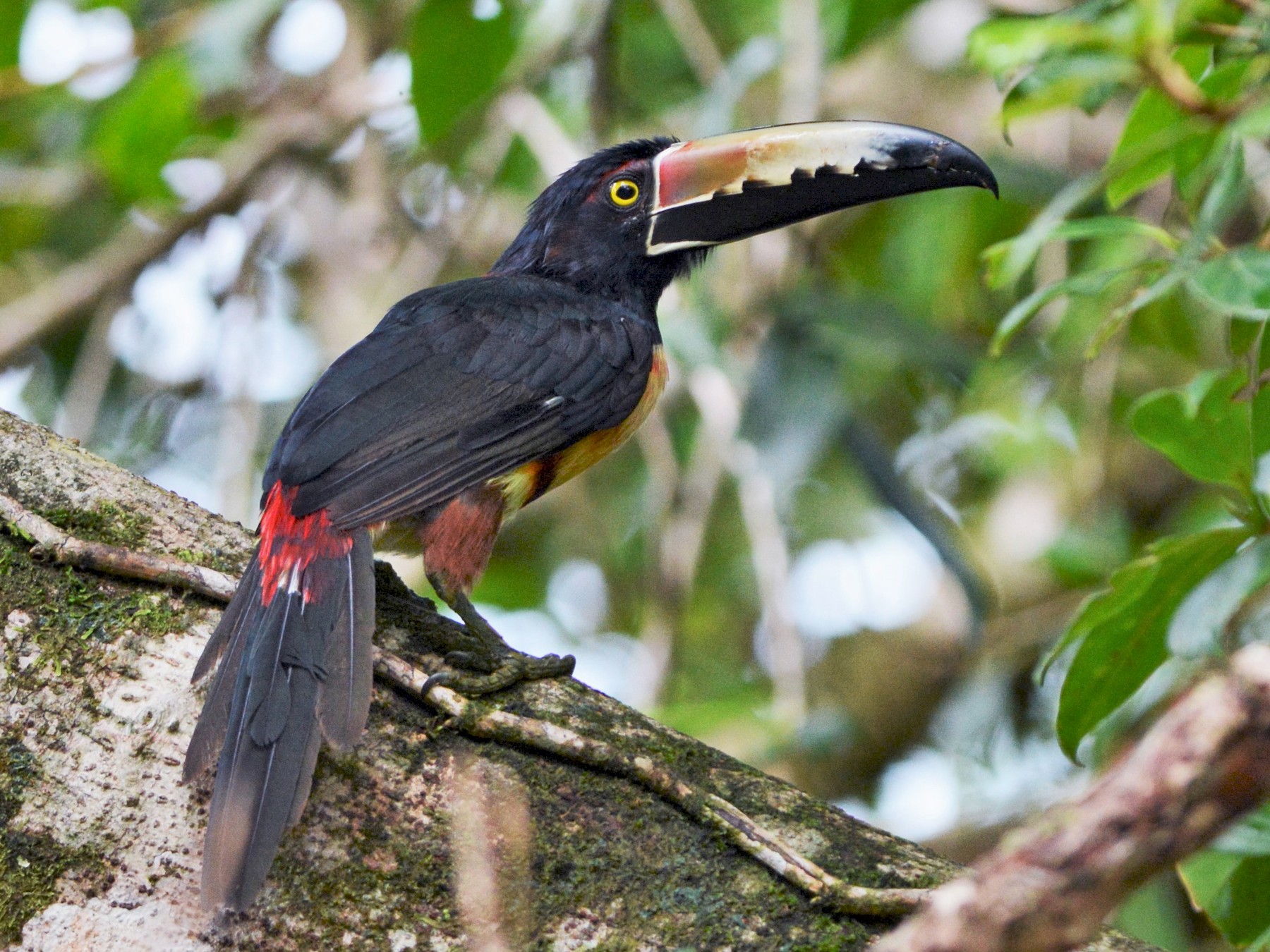 Also referred to as Banded or Ringed Aracari, the Collared Aracaris are a South American toucan species found in the lowland forests within their range. These birds lack sexual dimorphism.

Although their head and upper body are dark olive green in color, they appear to be black from a distance. They have bright yellow irises, which are also the color of their upper mandible, with dark markings. Their lower mandibles are dark in contrast.

Their throat and chest are yellowish, with a dark spot in the middle. A dark border divides them from their belly and rump, which are also yellow.

The dark plumage and large bills of Collared Aracaris are the only similarities they share with Toco Toucans. Here’s how you can tell them apart: 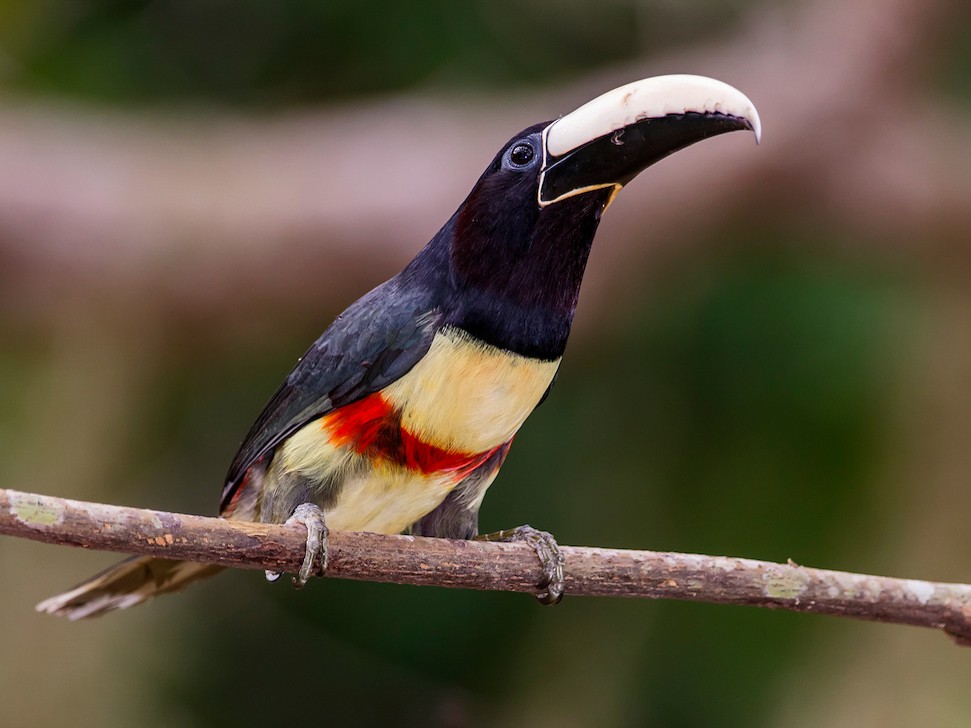 The Black-necked Aracaris are a South American toucan species that prefer to inhabit these heavily degraded former forests within their range. Brazil, Venezuela, and Suriname are countries with abundant populations.

In appearance, these birds are quite similar to the Collared Aracaris. Only their black plumage spreads further down their chest, and they lack the dark chest patch of the latter. Their eyes are dark and not yellow, with an unmarked yellow upper mandible.

The only similarity between Black-necked Aracaris and Toco Toucans is their black plumage.

The Aracaris have black faces and throats, standing in stark contrast with the white ones of the toucans. On the other hand, the dark underparts of toucans are replaced with yellow in the Aracaris. 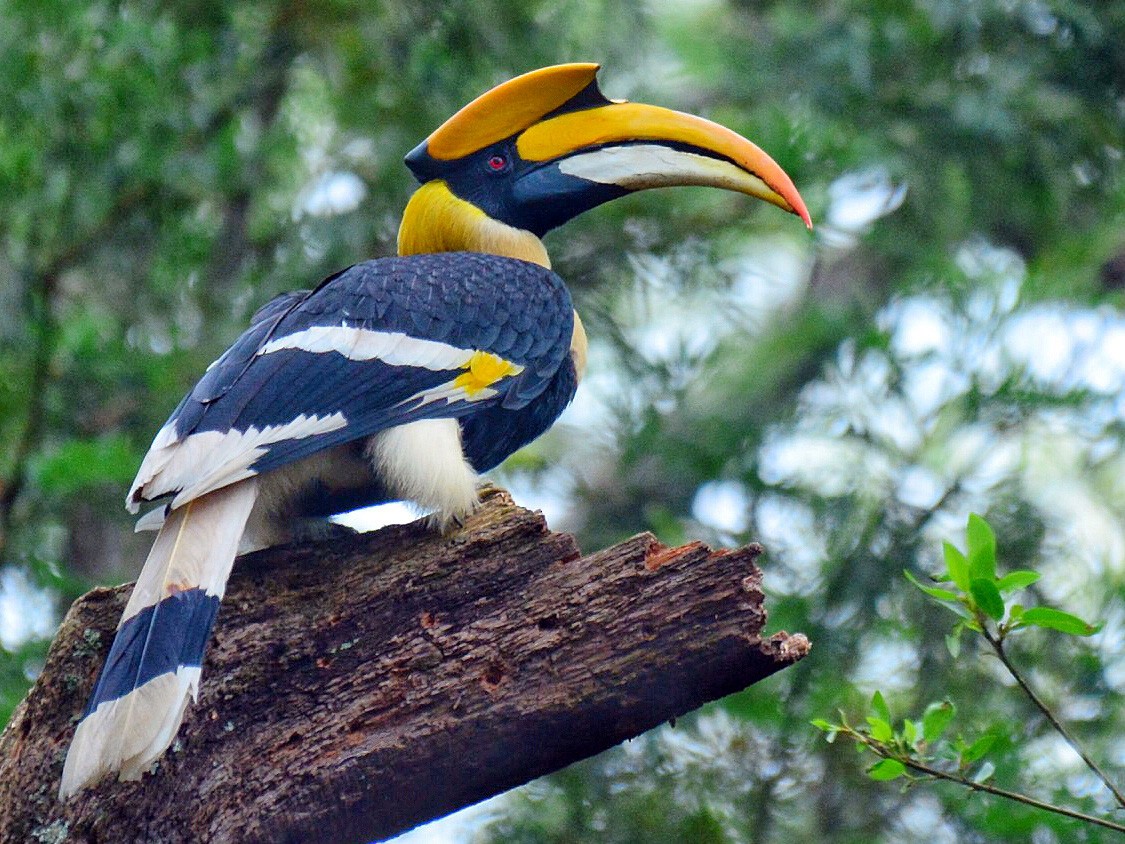 The Great Hornbills are a vulnerable hornbill species that are endemic to Southeast Asia.  One of the largest members of the hornbill family, these birds are also referred to as Concave-casqued Hornbills after the bright yellow casque placed atop their bills.

As their name itself indicates, these hornbills are both large and heavy, considered the heaviest hornbill in all of Asia. They have a black face, chest, and wings, with a yellow throat and neck, and a white rump and tail. Their wings are bordered with white feathers, and a black band runs across their tail.

Both sexes of these hornbills appear similar; only the females are smaller in size and possess differently-colored eyes. The eyes of the males are red, while in the females, they are bluish-white.

Toco Toucans and Great Hornbills share several similarities. Both these birds have bills that are unusually large for their bodies; both their bills are colored in shades of yellow as well. Their wings and back are both black, which is where their similarities end.

Here are some significant differences between the two: 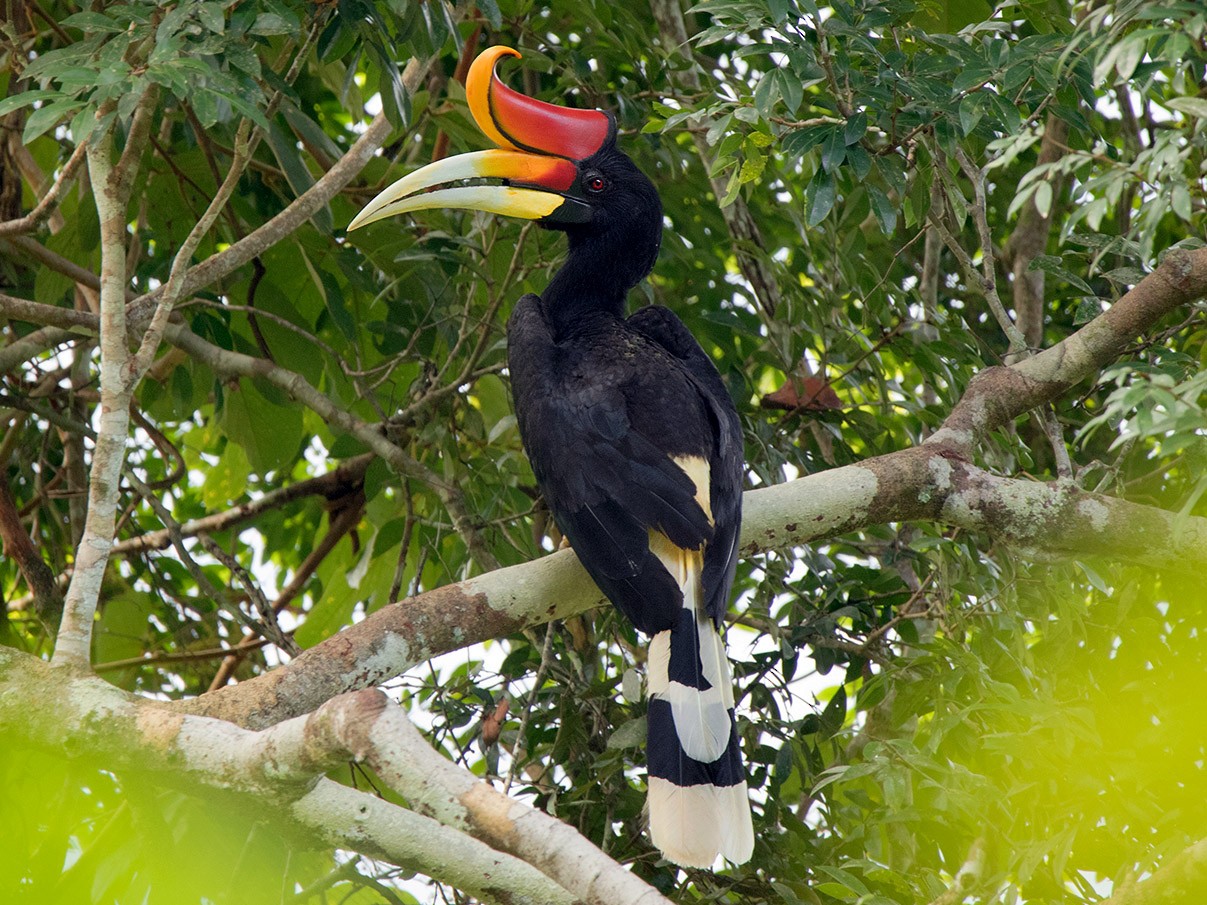 The Rhinoceros Hornbills are another large hornbill species that are primarily arboreal in nature. A vulnerable species, these birds dwell in the forests of Southeast Asia and are the national bird of Malaysia.

Rhinoceros Hornbills have a predominantly black body, except for their rump and tail, both of which are white. You’ll also notice a prominent black band on their tail, visible in perch and flight. Their bills and casques are colored in shades of orange, with the base being the darkest and the tip appearing yellowish-cream.

Both sexes of these birds have the same plumage, with the males being the heavier sex and possessing red eyes with black rims. On the other hand, the eyes of their female counterparts have white eyes with red rims.

Rhinoceros Hornbills share their black plumage and massive yellowish bills with the Toco Toucans, but that’s where their similarities end. The toucans lack their massive casques and have white faces, unlike the black-faced hornbills. They’re also much smaller in size and have black tails. 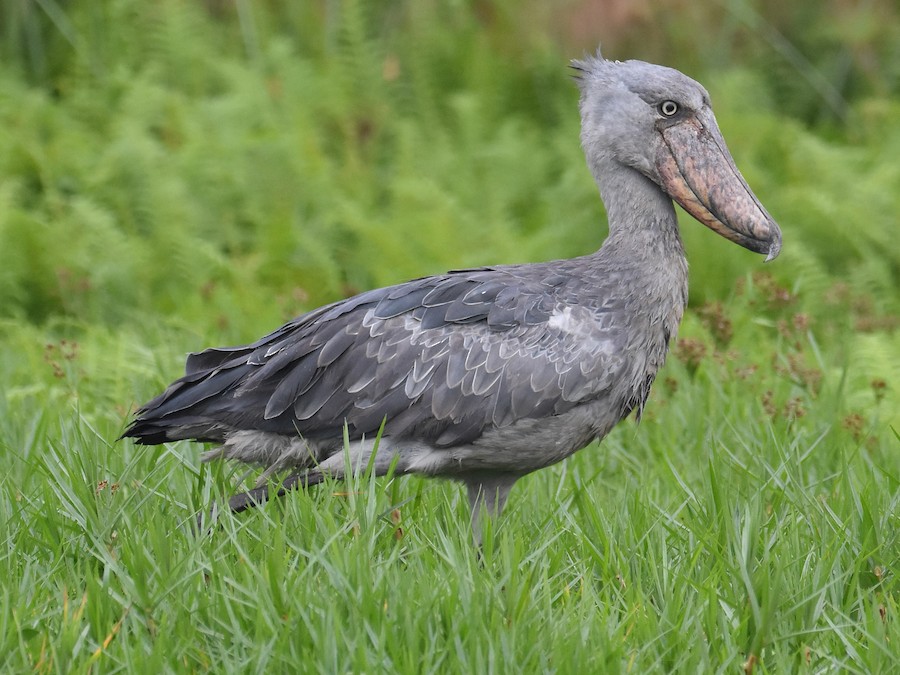 Also referred to as Whalehead, the Shoebills are large, stork-like wading birds that have been named after their gigantic, shoe-like bills. They’re endemic to the rainforests and swamps of the eastern parts of Africa.

Shoebills have a primarily bluish-grey plumage with touches of dark slate on their feathers. Their bills are straw-colored and have several grey markings on them, with the upper mandible having a keeled, nail-like tip. These birds also possess unusually large feet that help them forage through the aquatic vegetation.

The only similarity between Shoebills and Toco Toucans is that they possess disproportionately large bills. Shoebills are long-legged wading birds, while the toucans are arboreal and much smaller in size. They both have differently colored plumages as well. Lastly, the bills of Shoebills are longer than that of Toco Toucans. The largest of all three Skimmer species, the Black Skimmers are seabirds that look very similar to terns. These migratory birds breed in North and South America, with the northern population traveling to the Caribbean in winters.

As their name indicates, Black Skimmers have predominantly black plumage, except for their white face and underbody. Their eyes are black, and so is the tip of their bills, with an orange base. Both sexes of this species appear identical.

Black Skimmers appear similar to Toco Toucans due to their black upper body, white face, and long bills. However, their bills are shorter than the toucans and much darker in color. The toucans also lack a white underbody which these birds possess. 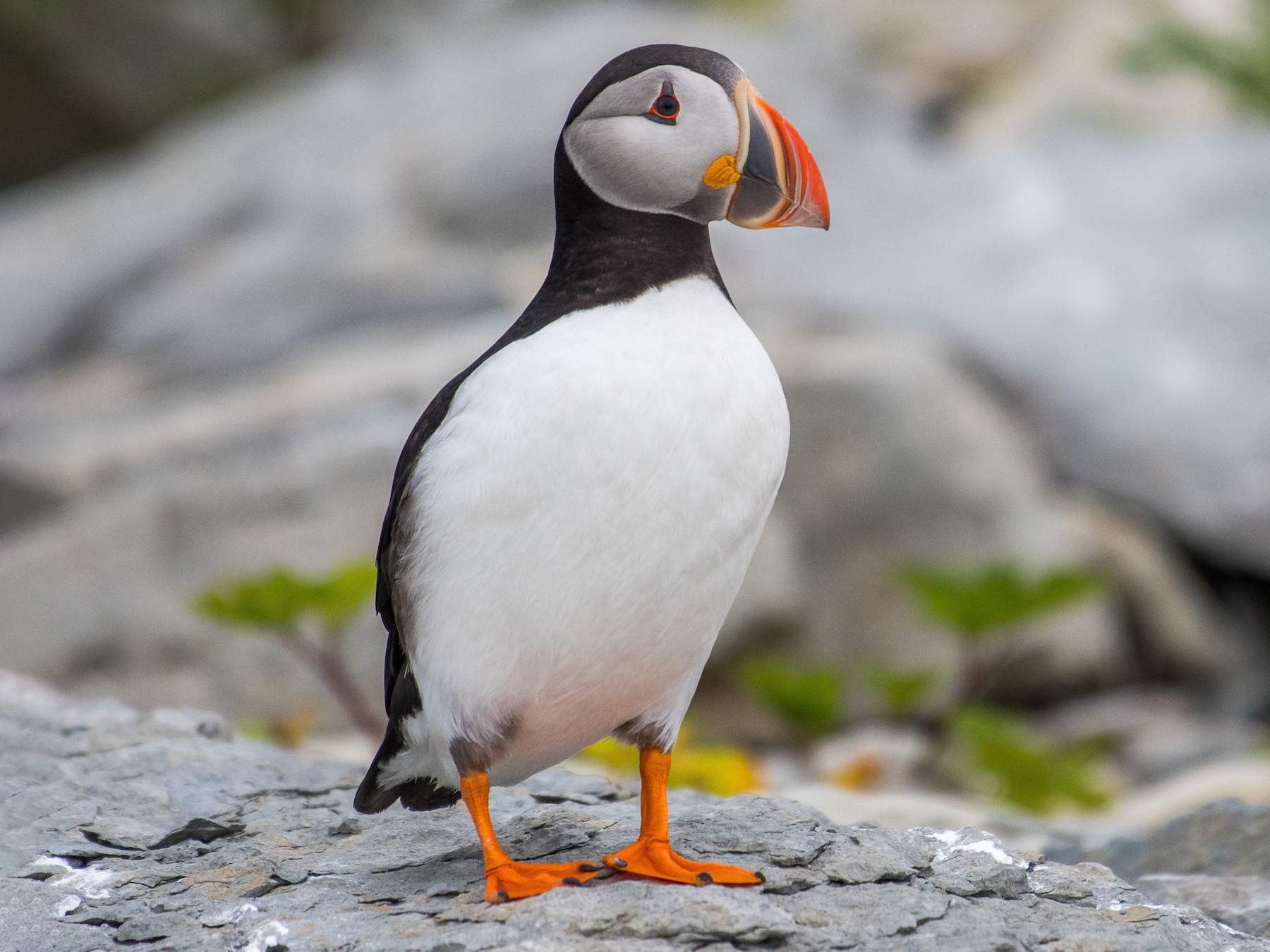 Atlantic Puffins are a vulnerable seabird species belonging to the family of the auks. They’ve been named the Atlantic as they’re the only auk species endemic to the ocean.

Atlantic Puffins have short but sturdy bodies with short necks, wings, and tails. They have a black head, wings, tail, and back, while their face and underbody are white. A black collar extends on their throat, with almost-triangular looking eyes that have brown irises and red rings. Their stout bills are orange, which is also the color of their webbed feet.

Both sexes of these auks appear identical in plumage, with the males being slightly larger in size.

There are two similarities between Atlantic Puffins and Toco Toucans: these birds have colorful, primarily orange bills and black plumages.

However, while the puffins are seabirds, the toucans are arboreal and dwell in tropical forests. Their bills are also much shorter than that of the toucans.

With this, we’ve reached the end of our article. There are several species of birds that do bear a striking resemblance to what most people assume is the toucan family—like the Great Hornbill, the Black-necked Aracari, and the Rhinoceros Hornbill.

Thanks for reading. Hopefully we found enough toucan look-alikes to keep you smiling but we may have missed a few so if you think that there is another bird that looks like a toucan, then please do let us via email. And don’t forget to share this article with your friends through social media.